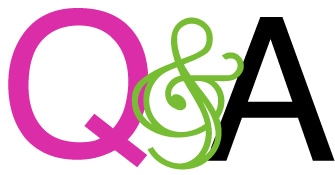 Every Monday, I answer a few of the questions that my readers send me. If you have a question you’d like me to answer in a future Q&A post, just leave me a comment here or email me (thefrugalgirl [at] gmail [dot] com) and put Q&A in the subject line. I look forward to hearing from you!

The first question isn’t exactly a specific quote from a reader, as I’ve received several emails wondering about making money from blogging. Rather than choose one email to print, I thought I’d just put out a general answer with my thoughts on the topic.
Generally speaking, I usually tell people that if they need money right away, blogging is not the ticket (at least not for most people).

If you don’t already have an online presence, blogging is a slow road to extra income. It takes a lot of time and consistent effort to build up a following that’s large enough to produce more than a few dollars in ad revenue. So, if your money situation is desperate and you needed money yesterday, it’d be much wiser to go pick up a part-time job, sell some belongings, do some babysitting, or something along those lines. The return on your time investment will be much faster than it would be with blogging.

I personally blogged for almost a whole year before I ever broke even with the money I’d spent on my hosting costs for the year ($100). Currently, my blog pays for its hosting/server costs with nary a problem and I have a respectable amount of money left over each month (it goes into my van fund).

But, if I calculated all the hours I spent on my blog before it ever started making any money, my hourly wage for blogging would probably be pretty poor. To me, that’s ok, though…I mainly blog to help other people, and so working for free for the first year or so didn’t bother me. I have a passion for what I do here, and that was enough to keep me going.

Instead of just trying to make money, pick a topic that you’re passionate about, a topic you could write about for free, and run with it! If you love what you write about, you won’t mind waiting through those traffic-building, no-income months, and you’ll much more likely to produce a blog that is interesting and exciting.

Yes, you can definitely make bread from scratch without a Kitchen Aid. A Kitchen Aid just makes the process easier.

I’ve made bread many times without the mixer, though…it just requires a slight adjustment to the recipe and a little more hand-kneading.

Also, since the mixer won’t be doing the beginning stages of kneading for you, you may need to knead the bread dough a little longer before the gluten is properly developed.

A bread machine does the mixing, shaping, and baking of a loaf for you, making an oven unnecessary. I don’t personally like bread machine bread as much as I like the kind I make myself, mostly because I think bread machines tend to produce a crust that is too thick and dark. This problem can be solved by using the machine on the dough setting and then taking the dough out, shaping it, and baking it in your oven.

Why do health experts say eating white bread is “bad” for you? Is it because of the type of flour used? Does making homemade bread make white bread healthier since it has no preservatives?

(I should note that there are a number of people who believe that eating any sort of wheat or any sort of carbs is a poor nutritional choice, but that’s a large and complicated debate that I’m not going to get into here. Obviously I fall into the camp of people who can and want to include wheat in their diet!)

White bread is not particularly nutritious because white flour is made from wheat that has had the bran and germ removed. Those are the most nutritious parts of the grain, so removing them produces flour that is basically just an empty carb. It’s equivalent to eating white rice, really.

Still, though, I am well aware that even homemade white bread isn’t a fabulous choice for nutritious eating. So, much to my children’s chagrin, our daily sandwich/toast bread is whole wheat, and I often make whole wheat rolls for us to eat with our dinner. We also regularly have whole wheat pancakes.

We do still eat our fair share of white flour, though….I don’t like to make pizza crust with whole wheat flour, and when I make a special breakfast treat like danishes or coffeecakes, I definitely prefer to use white flour.

If we were perfectly healthy, I suppose we would exist on a diet of whole grains, plant foods, all-natural meats, and raw dairy with no sugar or refined foods whatsoever, but I’m more of a moderation kind of gal. And so at least for now, I try to strike something of a manageable balance between healthy and processed foods.

Readers, do feel free to weigh in on any of these questions!

Today’s 365 post: How my camera travels to the sledding hill

Yesterday’s 365 post was Would this make you nervous? and it didn’t get published until last night because I thought I had scheduled it to publish itself, but apparently I hadn’t. Whoops.

What a fantastic post and at the perfect time for me. I'm glad you wrote this, I was really wanting to know how blogging with an income worked out personally for others, but it's not written about too often. I found your blog through Rachel at Grown Up Rachel and I'm so glad I did.

I agree with you on the money front.

I feel as though I have and will have a lot of info to share that could help people but I have totally gotten the idea out of my head that I will be making money right away.

It takes time to build up a readership and trustworthy friends. You have to have good content and speak with your own voice, too!

Also, you need to make sure that you are an active part of the blogging community by commenting or hosting and entering giveaways which take up a lot of time too!

My best advice that I learned is to just keep plugging away and speak (type) from the heart! People can totally tell if your just in it for the green.

I too make all my own bread. I was making whole wheat bread with no white flour. I have now changed to all spelt flour-long story, won't bore you. But there is more not good about white flour than just what is removed. When you take in white flour, your body can not digest it with all the nutrients gone so it begins pulling nutrients out of your body to compensate for what the white flour lacks. This in turn begins depleting your body of nutrients causing deficiencies. Once I began making all my own whole wheat bread, I prefer it. I also use whole wheat pastry flour in place of white flour for things like muffins, pancakes, quick breads. It does not have as much gluten so it can not be used for something like a loaf of bread.

"When you take in white flour, your body can not digest it with all the nutrients gone so it begins pulling nutrients out of your body to compensate for what the white flour lacks. This in turn begins depleting your body of nutrients causing deficiencies. "

If you need money right away you can get a pay day loan or sell off any gold in an emergency. Garage sales are not always legal anymore. You can get a tax slip for donations to Goodwill.

I really, strongly recommend against a payday loan. It is not uncommon for the interest rate to be 50% on one. What happens, 9 times out of 10, is that the borrower can't pay the loan, and so uses the next check to pay off the last loan - and finds himself even deeper in debt.

Not a good idea.

Better to do, well, just about anything else I might suggest than get stuck in that trap. I've seen it happen, it's not pretty.

Sarah - you can also use a hand mixer to mix the dough, before kneading by hand. How much you use the hand mixer (from mixing in most of the flour all the way through doing all the kneading) depends on how much bread you're making and how powerful the hand mixer's engine is.

I find that bread cooked in a bread machine doesn't vary much: no matter the recipe to comes out relatively soft and squishy. (This is not a slam - I like soft, squishy bread.) Breads cooked in an oven cover the whole range of textures.