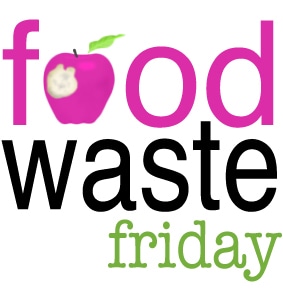 Every week, I post a picture of the food that has gone bad over the last seven days. Why do I do this? Because in March of 2008, I finally got fed up with the amount of food I was wasting, and I thought that showing my waste to other people would motivate me to use up my food instead of wasting it. Because this often embarrassing practice was so helpful for me, I invited other bloggers to join me in posting their food waste photos, and Food Waste Friday was born.

The white squash (I think it’s a patty pan?) is my own fault because I forgot about it in the drawer until it became mushy.

(Justification alert: I got a LOT of squash in my produce box, and we don’t particularly like squash, so I’m sort of pleased that I managed to get through almost all of them.) 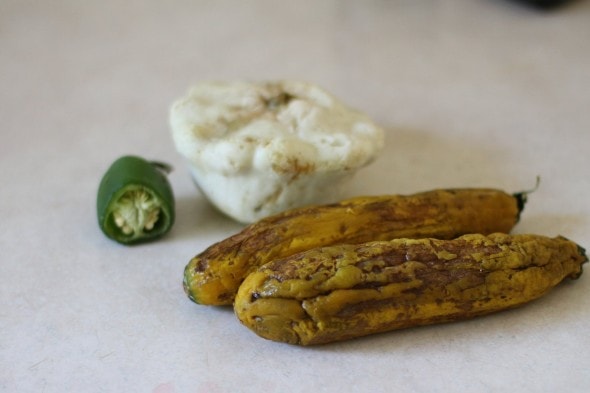 The two yellow squash are partly my fault and partly my fridge’s fault.   I’m not sure exactly why, but they froze, even though they weren’t shoved into the back of the fridge.   They were a little old to begin with, but still workable for something like zucchini bread.

Once they froze, though, I felt it was time they went to live in the compost bin.

The moldy jalapeno just went unused too long.   No justification there!

Now for some happier photos, because I did lots of food-saving yesterday.

(Oh, actually scratch that.   I have a moldy avocado to show you first.) 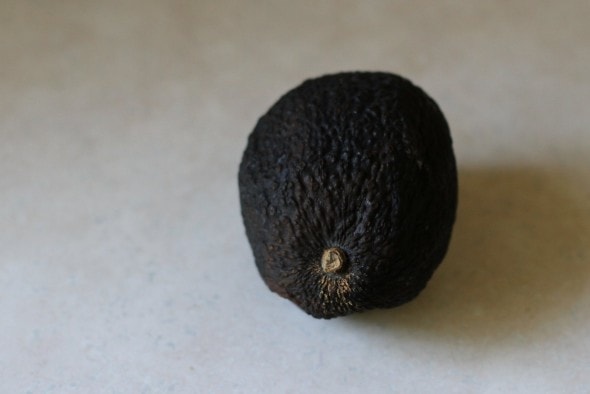 Now onto the good stuff, for reals.

I froze some discounted peaches from the produce stand.   We’ll use these for smoothies in the winter. 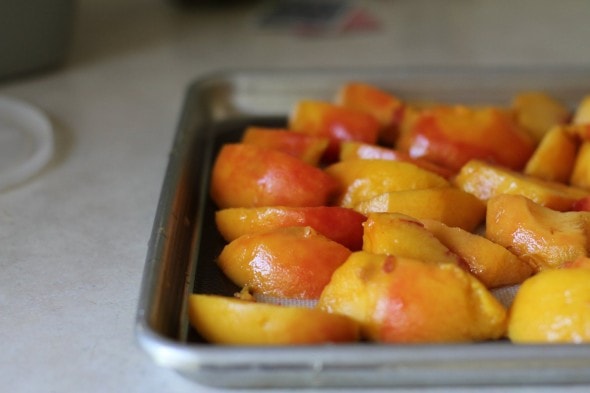 I peeled and froze some tomatoes from my parents’ garden because we had a few too many to eat before they went bad.

(In case you were wondering, peeling tomatoes is easy. You just cut the stem off, dunk them in boiling water for a minute, remove them to a bowl of cold water, and the skins peel right off.) 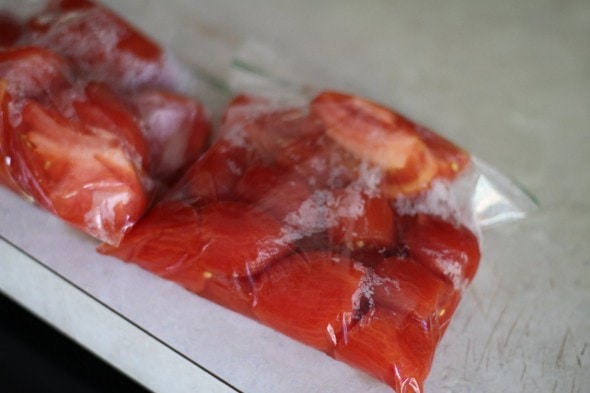 I made a salad to use up the last of a head of lettuce, some leftover beef, the end of a cheese round, and some leftover homemade mustard vinaigrette dressing. 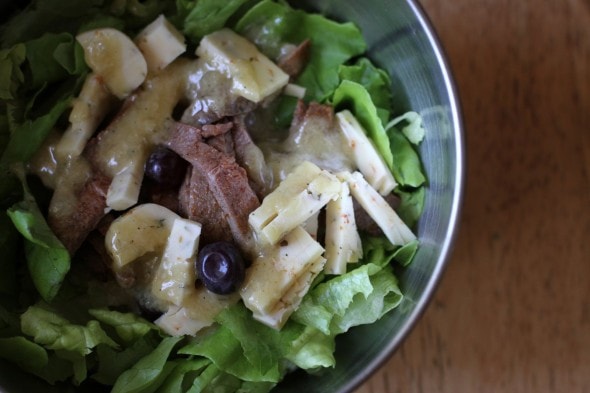 Last Friday, I’d made enough dough for four thin crust pizzas, but I only baked three.

(Joshua ended up going out with a friend, so we needed less pizza!).

I sort of forgot about the dough, but found it yesterday.   I heated up a pizza stone, patted the dough out into a circle, threw it into the oven, and wished it well. 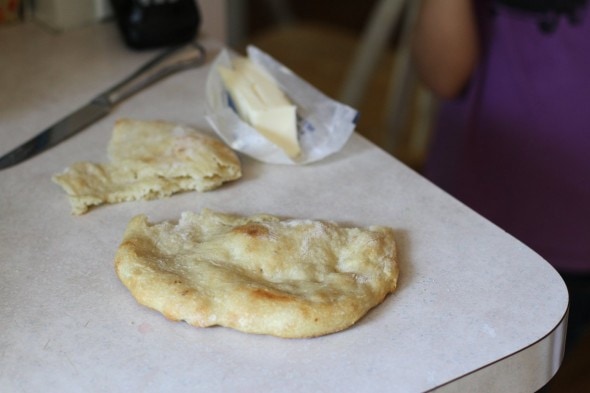 I wasn’t sure the yeast would still have any oomph left, but the dough did indeed puff in the oven and it made a delicious flatbread, which we ate up in short order.

And lastly, I made a smoothie which used up the last bit of an avocado, the last of the kale, two portions of leftover fruit salad, the last of a jar of yogurt, and a bit of OJ concentrate.       And I added frozen blueberries. 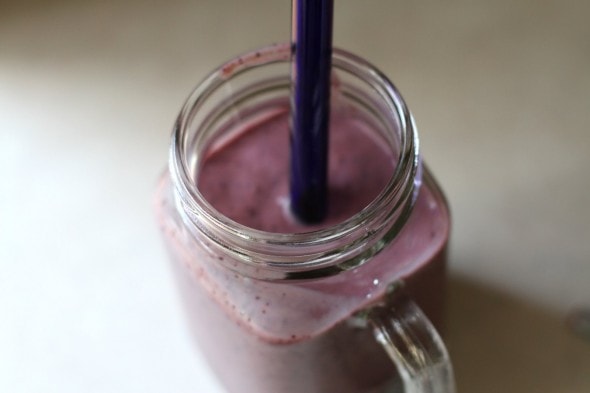 The kids and I thought it was quite delicious, actually. No one would have known it was such a clean-the-fridge concoction, especially because the blueberries make almost any smoothie an appetizing color.

So, I had to compost a few things, but I think I saved a lot more food than I threw out, which makes me happy.

How did you do this week? If you blogged about your food waste, share your link in the comments! You’ll save money, reduce your trash output, and get a little publicity for your blog. And if you don’t blog, you can still share about your food waste by writing a comment.

Those of you who participate in Food Waste Friday can grab a fancy-schmancy button to perk up your posts. If you copy and paste the following code into your Food Waste Friday post, this little graphic will appear.

If you blog on WordPress, just make sure you’re in html mode when you copy and paste the code, or it won’t work properly.

I like to freeze tomatoes too but do not peel them since they are super easy to peel when slightly thawed. The skins slip off the same way they do for the boiling water method.

I've never seen that white type of squash before - and I am a big squash/zucchini fan so will look out for it now.

Those peaches are making me wish summer would hurry up and get here. I've nearly finished the mango I froze for smoothies last summer!

I like the idea of food waste friday! We tend to waste way too much food these days, so this is a good way to hold ourselves accountable. I just might have to join in next Friday if I have any food getting thrown out.

Thanks for the great tips - I'm vegetarian so didn't get so much out of the Easy Pulled Pork post (https://www.thefrugalgirl.com/2014/09/easy-pulled-pork-from-the-make-ahead-cook/) but this is perfect timing with the Fall months coming up. More Veggie Posts, please!

Woah, that avocado reminds me of the avocado and lime I bought for guacamole...last week. It's still okay, but I better get to it tomorrow morning.