I was thinking about this the other day as I was eating some (out of season) (not-local) blueberries, which were ridiculously tasty.

And I realized that if I had a magic wand that could make one food so affordable that I could eat it with abandon every day, berries would be it. 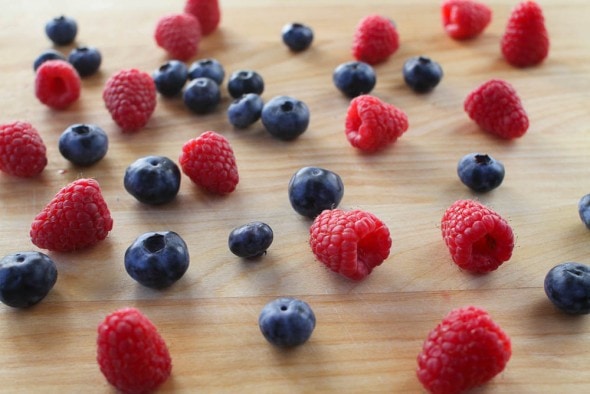 Enough organic, local berries to eat every day…that would be heaven.

(I realize that if I had them every day, I probably would cease to value them in short order. Let’s ignore that for now, though, ok?)

I’m cheating here by picking two, but second on the list would be fresh scallops.   Not the little teeny bay scallops, or the kind that come floating in the off-tasting liquid, but the really super expensive $25/pound dry scallops (they’re just called dry because they’re not sold in liquid) that cook up into little bits of heaven.

All right, so it’s your turn now.   What one food would you magically make affordable?

(For the purposes of this question, we are completely ignoring the health value of whatever you pick.   It can magically be healthy too.   😉 )

So I read all the comments and thought about it for a while: what could I eat every day without caring for the costs and calories. Red wine would be nr. 1 in my top 5 ( Sangiovese, Cabernet Sauvignon or a Merlot, that sort of wine keeps me happy). Nr. 2 would be roasted almonds. Avocado's, I really love them. So I make it my nr. 3. Nr. 4 hmmm I would go for the raspberries and the blueberries, can't wait to grow my own. My nr. 5 must be haring, herring in english I think, raw with onions on it. My conclusion is that I am a very happy woman because I can buy all of the above easely every day if I want.

Berries is a good one. This time of the year I am anxious for asparagus though. I recently splurged and bought some at the outrageous price of $6/lb. But I figured if I was going to splurge - better asparagus than ice cream.

I would truly love a nice ripe nectarine everyday, too.

Yogurt. My family loves yogurt. And there are five of us. If each of us ate one cup of yogurt at .50/cup/day it would come out to $17.50/week. (That is if I can find a good quality yogurt on sale. The type we prefer typically runs about $1.00/cup which would be $35/week on yogurt alone!) We typically end up just buying one quart of yogurt for $4-$5 for the week and when its gone its gone, otherwise it takes up too much of my grocery budget.

You can easely make your own yoghurt. Search the internet and just try. It is easy, cheaper and you will never go back to store bought yoghurt. Trust me!

For me it woukd be fresh wild salmon with roasted green asparagus. On the fruit list though it would also be berries, tasty peaches (that are only upon luck to get), and pomegranete.

Answer #2, which incorporates the lack of concern about health: 1. Harry & David's Dark Chocolate Moose Munch, the kind with few nuts. 2. Strong cheeses, both hard (such as cheddar) and moldy (I love me some moldy, stinky, strong-but-smooth cheese).

My list was much longer, then I realized I was more motivated by the lack of negative health impact than by price so I stopped.