Yesterday we stopped at a little produce stand (aren’t they such lovely things?) and perused the offerings. I bought some sweet corn, and went to pick up a cantaloupe when I noticed some in a box off to the side. 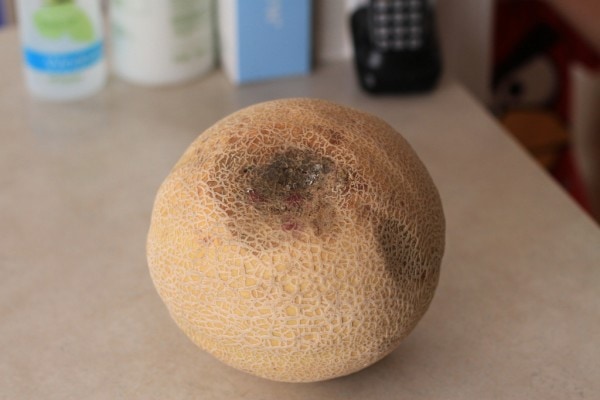 This appealed to me on a frugal level, of course, but I also appreciated the opportunity to save a cantaloupe that could have been thrown out.

Jonathan Bloom of Wasted Food frequently talks about how produce that’s anything less than perfect is mostly thrown out by grocery stores. Even produce that’s perfectly ripe and edible but is oddly shaped gets tossed, and that’s just so sad.

Anyway, I happily plunked down a dollar for my cantaloupe, took it home, and promptly cut it open.

Sure enough, it was ripe, juicy, and delicious, all except for the bruised part. 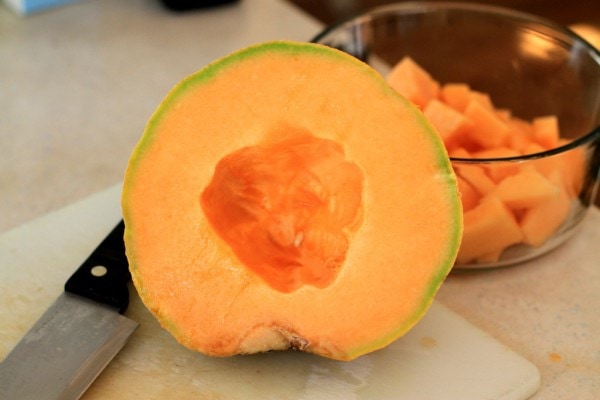 We ate the whole thing last night, and now I’m wishing I bought more melons from the dollar bin. A dollar for a locally grown cantaloupe is a steal!

I’ve noticed that a number of produce stands offer slightly-less-than-perfect produce at a discount, and I really wish that grocery stores would do the same. I for one would be glad to carve out a bruise or cut off a soft spot as long as I wasn’t paying full price.

Do your grocery stores and produce stands offer discounts on imperfect produce?

I had a very successful grocery store 'random bag' as I like to refer: I bought all this for $1 - one avocado, six bananas and an apple. All still fine to eat :) yay or random produce stuff!

I love getting deals like that at the local produce stand and farmers' market. We eat (or freeze, or cook and freeze) those kinds of produce right away... it enables us to buy a lot more produce than we would otherwise! And Harris Teeter is very good about selling seconds produce.

This was a great risk:)

Our local chain stores do actually sell discounted less-than-prime produce, and I snatch it up. And I discovered one of the farmers at our farmers market sells seconds of their apples at half price. They are soooo good. Lots of things taste better when they are local, but local apples are one of my favorites!! One of my friends is a manager at our Trader Joe's, and they donate everything they take off their shelves to a church that distributes it to a variety of food pantries, soup kitchens, etc. Love that.

Even though the profit is less--or nonexistent--I can tell you the farmer was glad you bought that melon too. He wouldn't have put it out there otherwise. He (she?) worked really hard to grow that fruit, and it pains most farmers I know to just throw out food that is perfectly good except for a small blemish. We have a small flock of free-range laying hens, and we sell our cull eggs to people who are willing to take odd sizes, bumpy shells, or other eggs that don't make Grade AA. Those eggs might look kind of different on the outside, but they're all the same on the inside (I guess that kind of describes people too!).