Spiced nuts are often considered to be a holiday food, but I love having them around for topping summer salads. 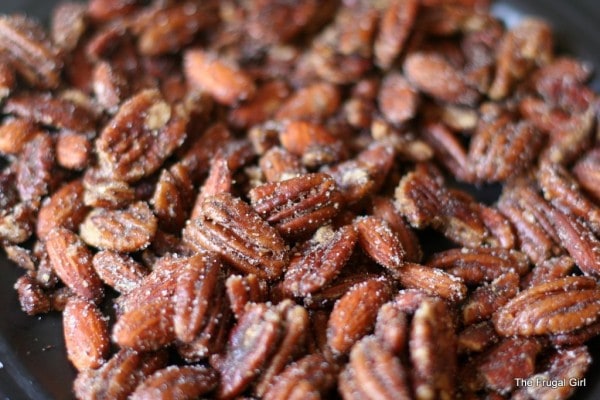 This recipe, which I found in a Cook’s Illustrated library book, probably doesn’t really qualify as a frugal recipe, simply because pecans (and nuts in general!) are not cheap foods.

However, nuts are really nutritious, and they are what I would consider to be real food.

Plus, they’re kind of snacky, and it’s hard to find snacky foods that are at all nutritious. 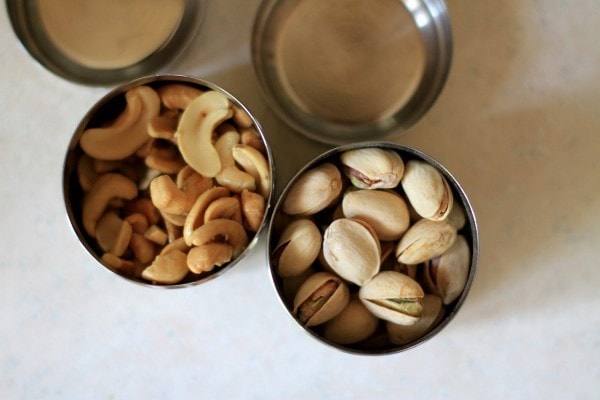 Anyway, I consider nuts to be worth the money, because frugality isn’t always about saving as much money as possible.

To me, frugality has more to do with getting great value for my dollar, and sometimes that means doing stuff like buying nuts instead of cheese puffs. 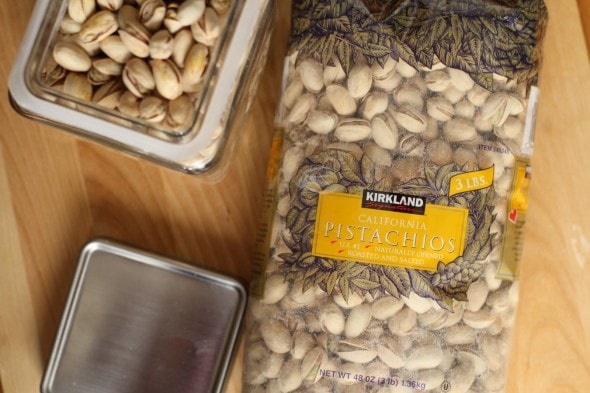 I believe nuts are at their most nutritious when they’re raw, and we do eat a lot of them that way, but I sometimes like to use this simple little glaze recipe to turn pecans into a delicious salad topping.

Most of the flavor in the recipe comes from the spices, and though the recipe only contains a tablespoon of sugar, the nuts taste quite sweet.

If you don’t eat all of these on your salad, you should know that any leftover nuts make a delightful snack. 😉 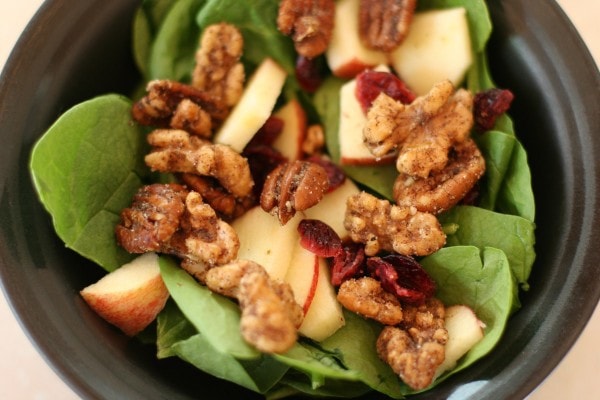 And come to think of it, if you compare the price of these to the price of glazed/spiced nuts sold as snacks at the store, this might well be a frugal recipe.

These are super easy to make….I’ll show you.

First, combine salt, pepper, cinnamon, cloves, and allspice in a bowl. You could, of course, change the spices to reflect your personal preferences. 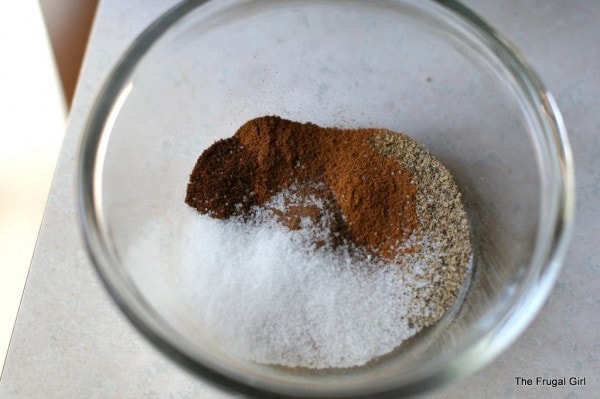 Melt 2 tablespoons of butter in a large skillet, and add the spices.

Add two cups of pecans, or whatever nuts you prefer, and toast over medium heat for 6-8 minutes, stirring frequently. I used a combo of pecans and almonds this particular time.

Keep an eye on the nuts while they’re cooking!

Should you be tempted to leave your nuts to go check your email or something, remind yourself that the last time I did that, I burned my pecans.

Stay close by so that you can keep stirring the nuts.

Place the spiced nuts into a bowl and toss with a tablespoon of sugar. Spread the nuts out on a plate to cool.

Store them in an airtight container once they are completely cool.

You can substitute almonds, walnuts, or cashews for the pecans, or you can use a mixture of nut types.

I'm printing out the recipe now! Already planning these as gifts (including pretty jars and ribbons).

Hello! Long-time reader and fan here :) Can I ask a random question? When I read your daughter Lisey's name, I don't know how to pronounce it in my head. Is it like LEE-see? Or LIE-see like the middle of Eliza? (I was just catching up on emails and noticed your "Try BLTs Lisey's way!" and decided to ask.)

Your first way is correct! It's LEE-see. Her full name is Elise, but no one in our family ever calls her that. :)

Thank you so very much. I have been looking for a pecan recipe for meany years and this sounds ideal.

I purchase my nuts from the bulk section of the grocery store. Here in Seattle that's Fred Meyer (Kroger's) or Winco, but I imagine there are stores all over the country that sell bulk nuts.

What timing, When I saw the nut photo in Thursday's post I went looking for the recipe & came up empty. Thank you for the update.