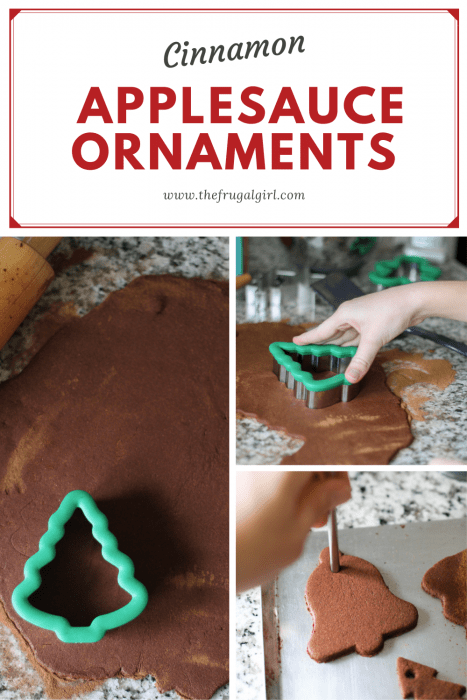 When I was a kid, a friend of mine gave me a cinnamon applesauce heart, and I remember keeping it as one of my special treasures for quite some time. I think I kept it in one of my dresser drawers, and I remember that it smelled good for ages.

I’d kind of forgotten about that until recently when I saw a couple of cinnamon applesauce ornament recipes circulating around the web. 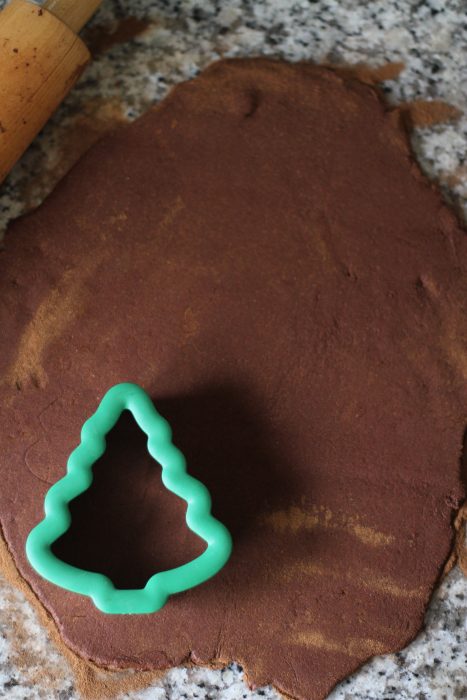 So, I thought it would be fun to make a batch.

Fortunately, they’re really simple and they require only a few inexpensive ingredients. 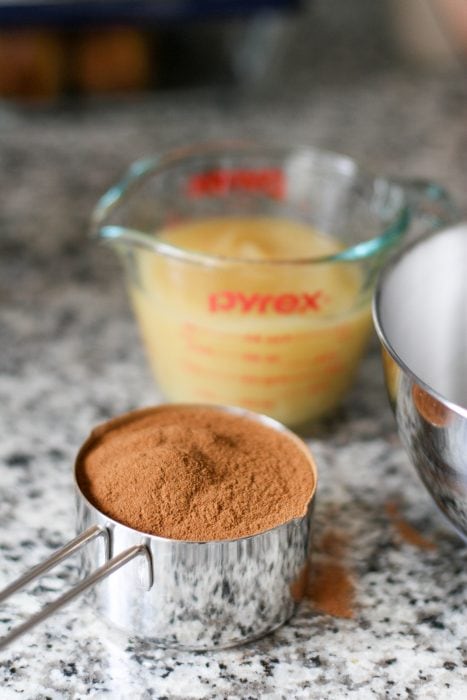 What ingredients do you need for cinnamon ornaments? 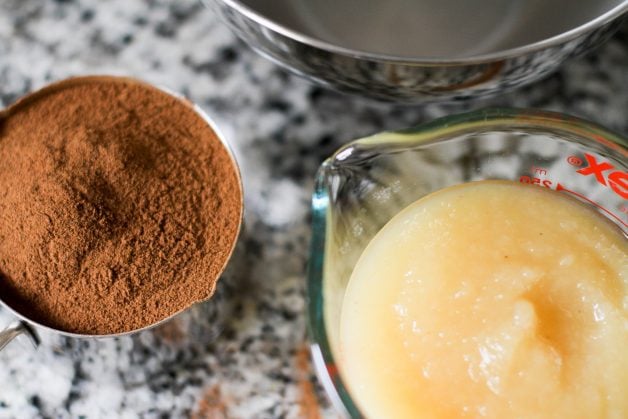 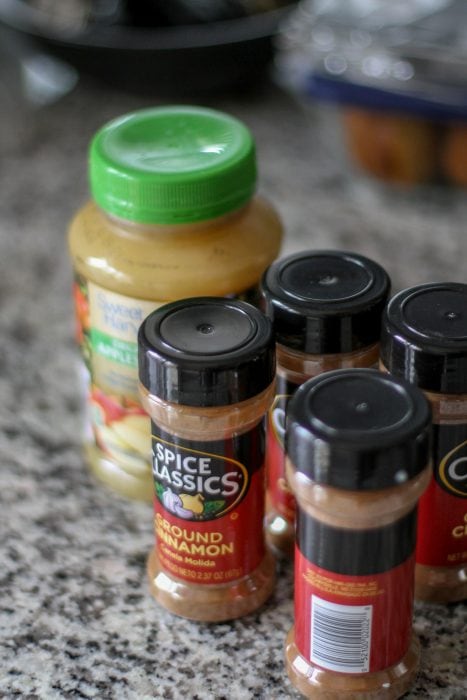 You will need 2 cups of cinnamon, so get the cheapest stuff you can find. This is not the time for gourmet cinnamon!

Do you need to use glue for applesauce cinnamon ornaments?

The glue showed up in some recipes I saw and not in others, so we made a batch with glue and a batch without, and I have to say, there was no appreciable difference.

So, I’d label that as an optional ingredient.

Do you have to bake cinnamon ornaments?

Nope. If you’ve got time aplenty, you can just let the ornaments sit on the baking sheet for a couple of days, until they’re nice and hard.

How do you make cinnamon ornament dough?

To make the dough for these, just mix 2 cups of applesauce and two cups of cinnamon (plus a tablespoon of glue if you like.) 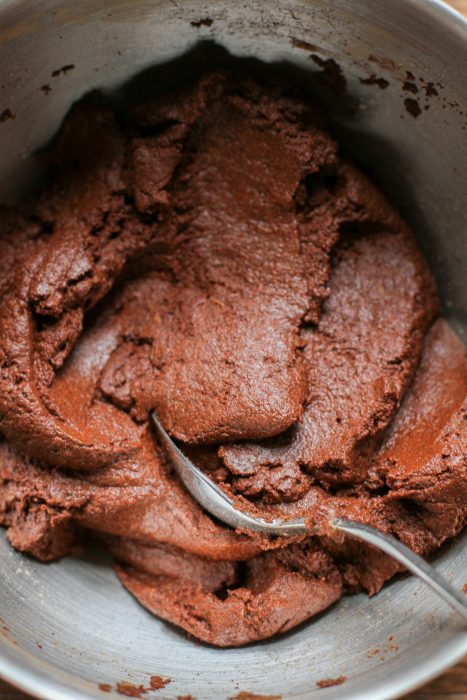 The dough should be fairly stiff, or it’ll be too sticky to roll out. So if it seems too wet, just mix in a bit more cinnamon.

Dust your countertop with cinnamon, and roll the dough out, just like you would if you were making real cookies. 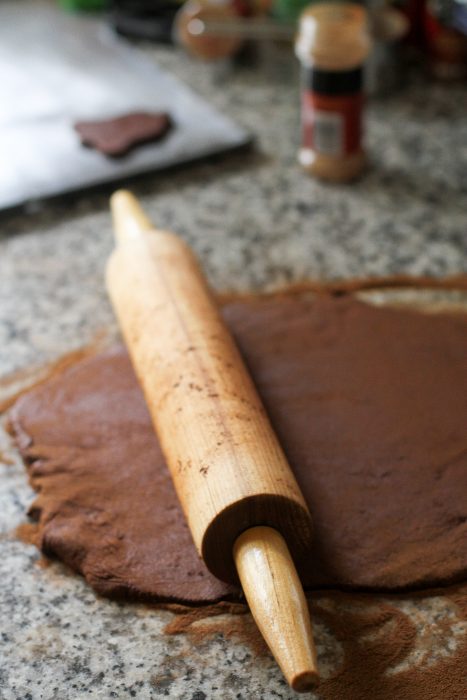 Use your favorite cookie cutters to cut out shapes. I wouldn’t choose anything too large because the possibility of breakage is higher with a large ornament. 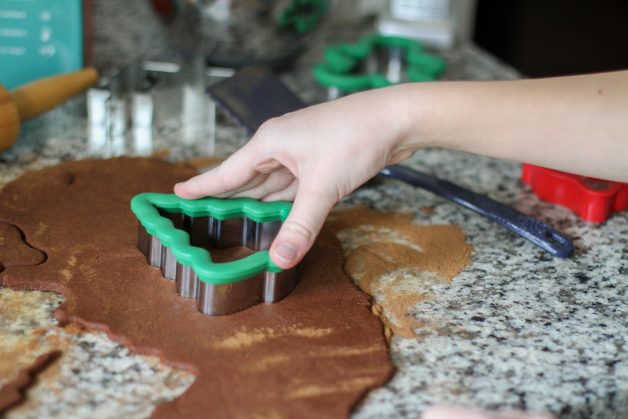 Incidentally, I’m so used to snitching small bits of cookie dough, I very nearly ate this dough several times because it looks like a delicious sort of ginger cookie. Fortunately, I caught myself in time. 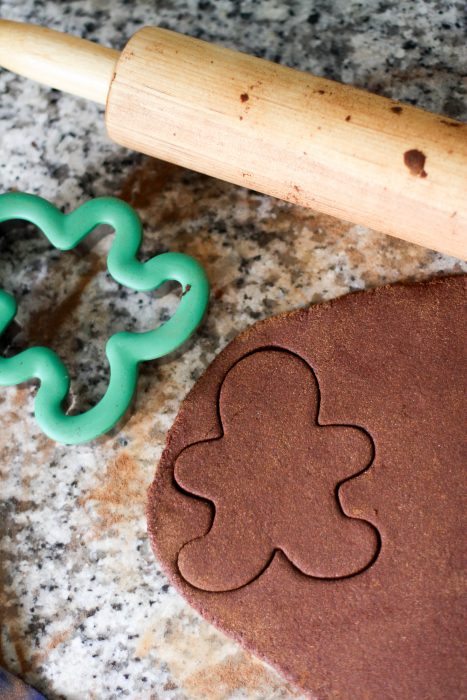 Place the ornaments on a cookie sheet, and reroll the scraps to make more ornaments. 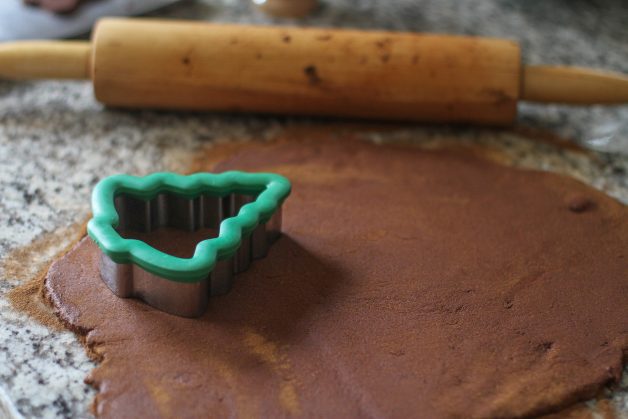 Use a toothpick or a straw to make a hole at the top of the ornaments. Make the hole bigger than you think it should be, since the ornaments will shrink some as they dry. 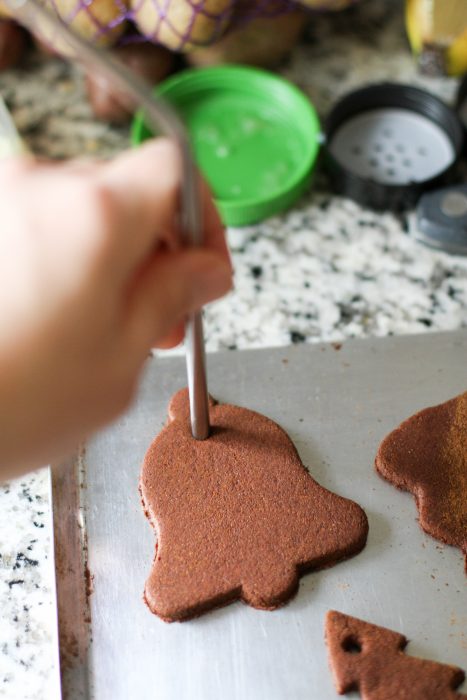 I just wiggled the toothpick around until the hole was large enough. 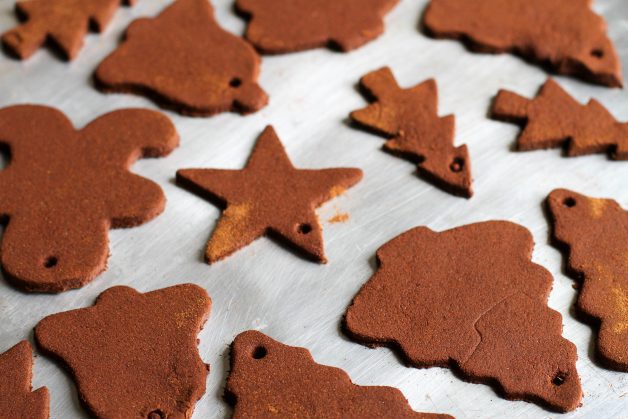 Now, several of the recipes I came across suggested baking these at 200° F for 2.5 hours, but on the day we made these, we didn’t have time for that.

So, we just left ours on the baking sheets to dry at room temperature (which does take longer, but you don’t have to actually be involved in the process!)

This took a few days, but of course, that can vary a lot depending on how dry the air in your house is.

I didn’t find it necessary to put ours on racks, and I didn’t turn them until the very end, when they were quite firm and there was just a small wet spot on the bottom. 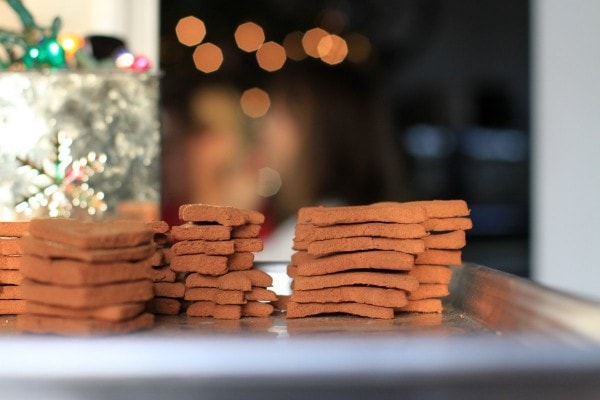 If the edges of your ornaments are a little ragged (ours were!), you can use a small piece of sandpaper to clean them up, and then they’ll look all lovely and neat. 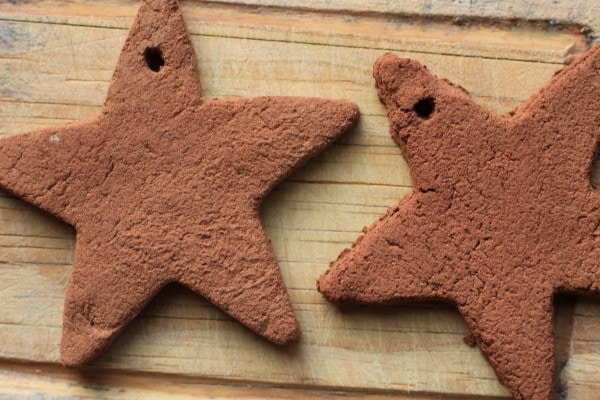 How to make hangers for cinnamon ornaments

You can use a variety of things to make the hanger for these ornaments. I just rummaged around in my jar of spare ribbons and came up with these. 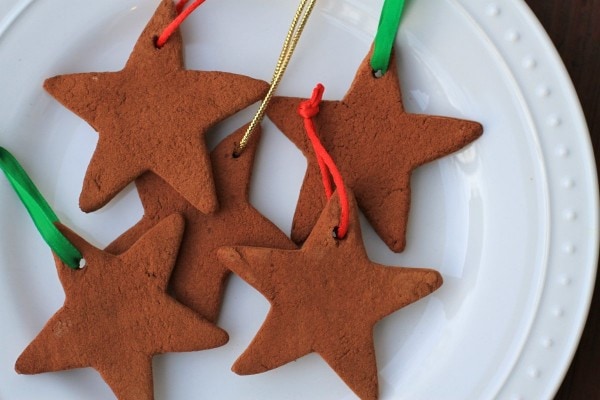 Hey, did you know that if your ribbon is polyester, you can melt the ends so that they don’t fray? I just light a match and hold the ribbon above it until the ends melt.

(Please do be careful since matches are fire and all. 😉 )

Hang your ornaments on your tree.

Or attach them to a package.

Or make a garland with them (I think stars would be perfect for that!) 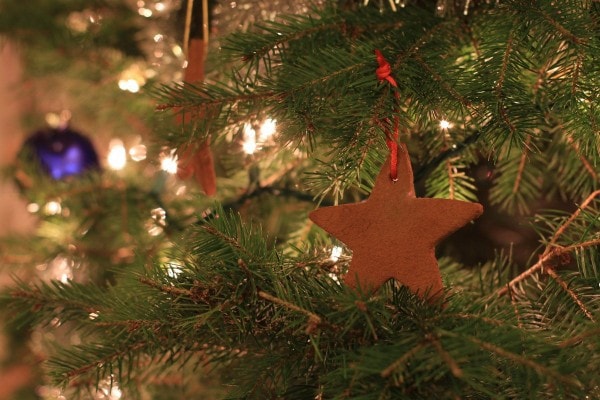 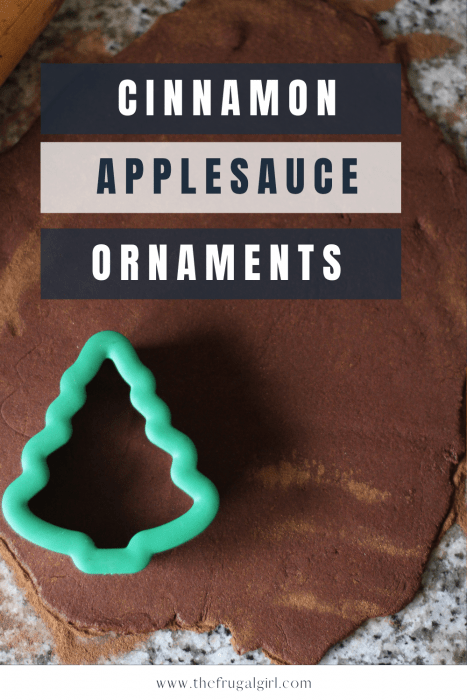 I used to make these with my kids to use as gift tags and for the kids' tree. We never used glue. That way if one of them decided to eat a bit of it, it wouldn't necessarily hurt them. They never did, and it worked perfectly. The scent does last for ages.

Thank you for reminding me of these!

I keep meaning to make more homemade ornaments, and I always forget about these for some reason.

How far ahead can you mix the dough for these ornaments?

I think you could definitely do a day or two ahead of time; the dough is so simple, I can't imagine anything would go wrong if you let it sit in the fridge.

I made these years ago...maybe 20? And last year several crumbled. They still smelled great! I made 2 inch gingerbread boys and strung them on a ribbon to fit in my kitchen windows sideways. Idrew icing face with squeeze paint. So cute.

A friend of mine said that you can use a dehydrator for these as well and said it seemed to do better than the oven.