I’ve made quite a few loaves of this bread since moving into my rental, and after I mentioned it several times, you guys asked if I had shared the recipe.

And oddly, I had not! 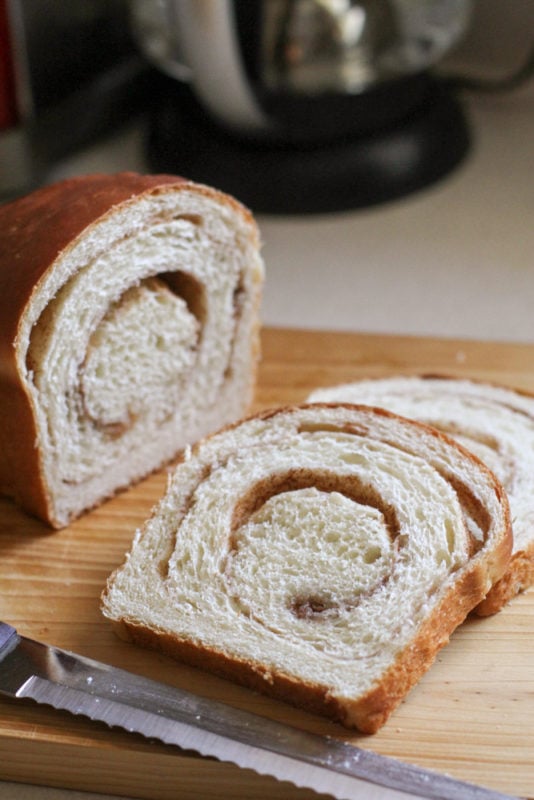 It’s basically a modified version of the egg bread dough I posted some years back, but I thought it would be easier to give it its own post rather than trying to add the modifications into the egg bread recipe post. 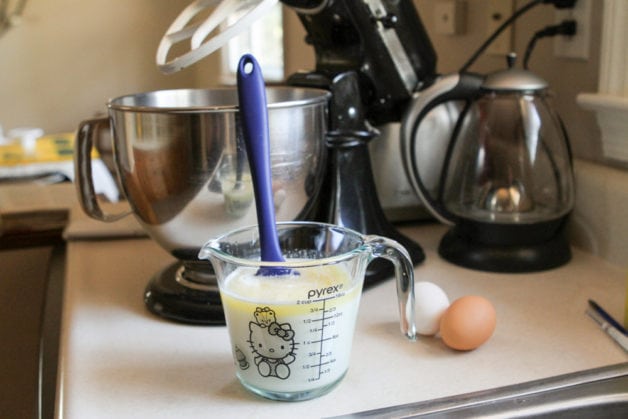 And it also is a lovely thing to make just if you want to eat it yourself. 😉 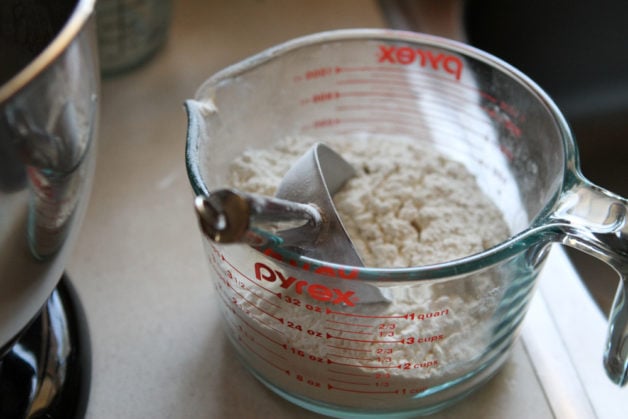 To make this, start by mixing 2 cups of flour plus the yeast in a mixer bowl. 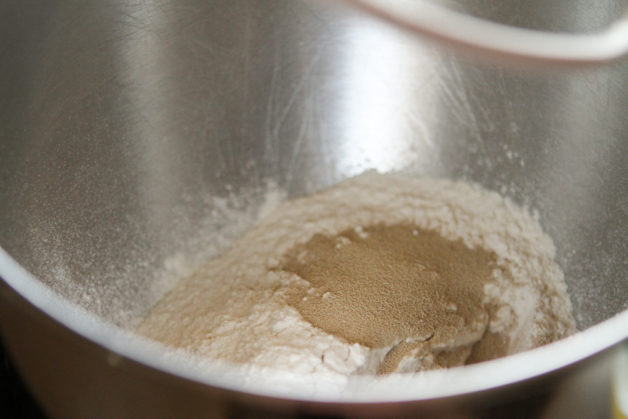 Heat up the milk, sugar, salt, and butter together until the butter melts and the mixture reaches 120-130° F. I just heat this mixture straight in the measuring cup; saves a dish! 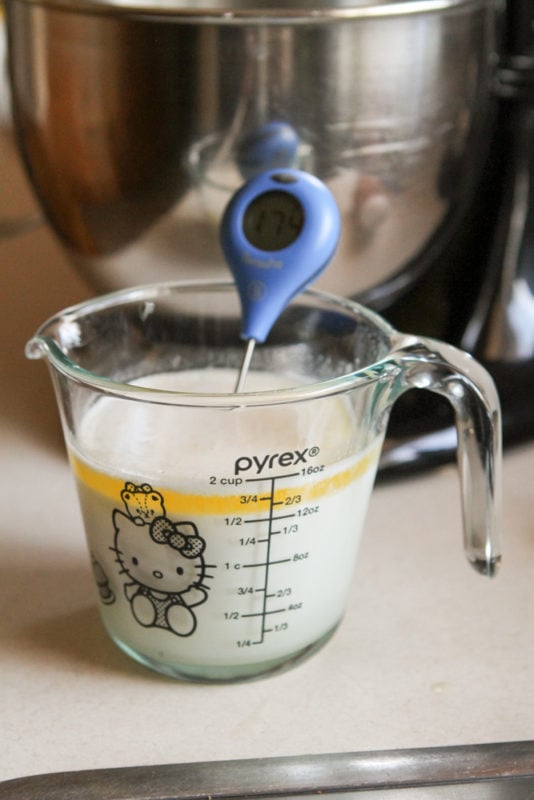 With the mixer running, pour in the warm milk mixture. Then add the eggs. Beat on low speed until combined, about 30 seconds. 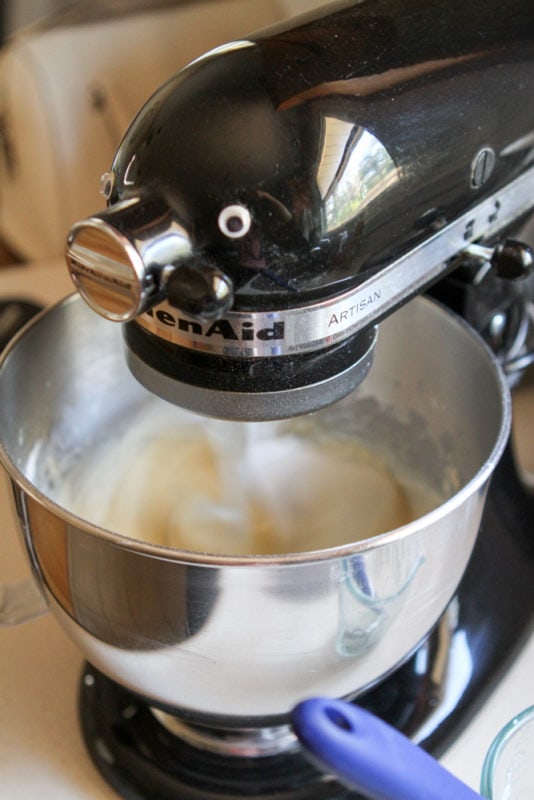 Beat on high speed for three minutes, and then mix in enough flour to make a soft but kneadable dough. 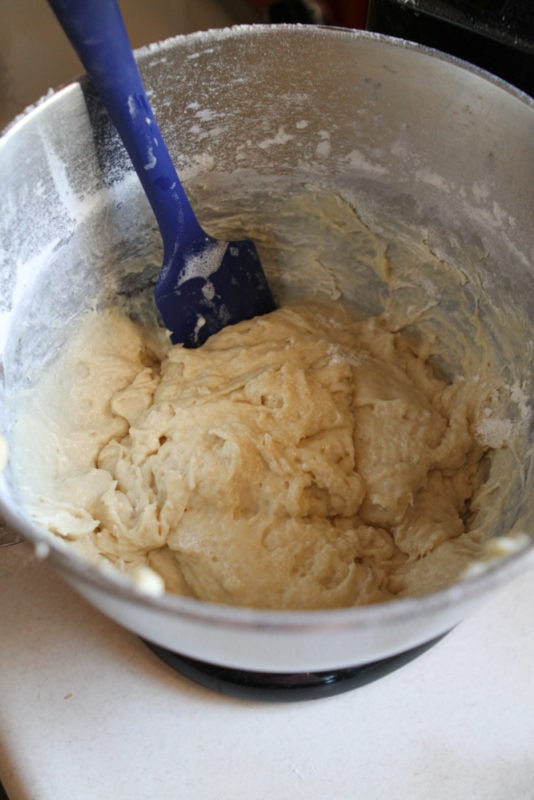 Turn the dough out onto a floured surface. 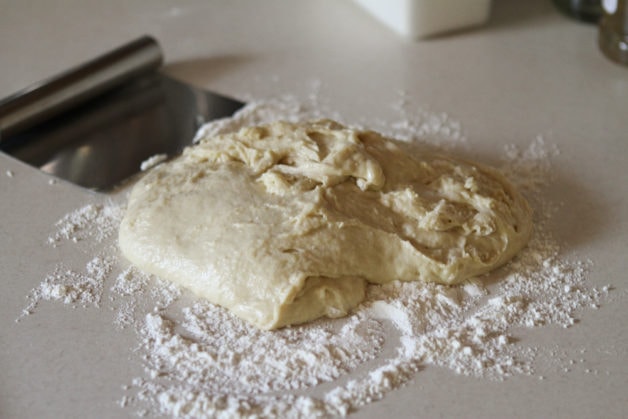 Knead for 5-7 minutes, adding flour as necessary, until the dough is smooth and elastic. 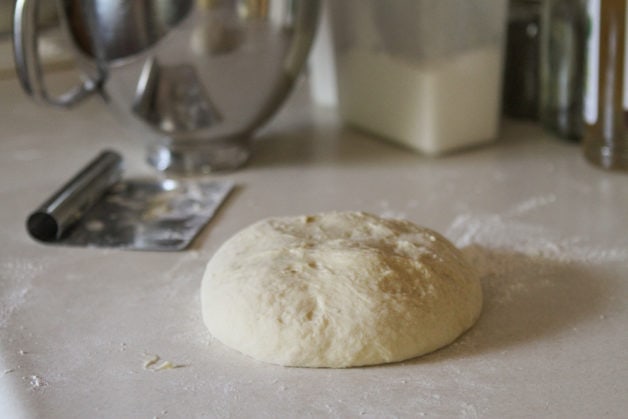 Note: if you usually knead your dough in the mixer with the dough hook, feel free to do that instead. It’ll be fine! I just learned to make dough with hand-kneading and I guess I’m stuck in my ways. 😉

Put the dough back into the mixing bowl (I don’t even bother washing it out), cover the bowl with a wet tea towel, and let the dough rise in a warm place until it’s doubled, about an hour. 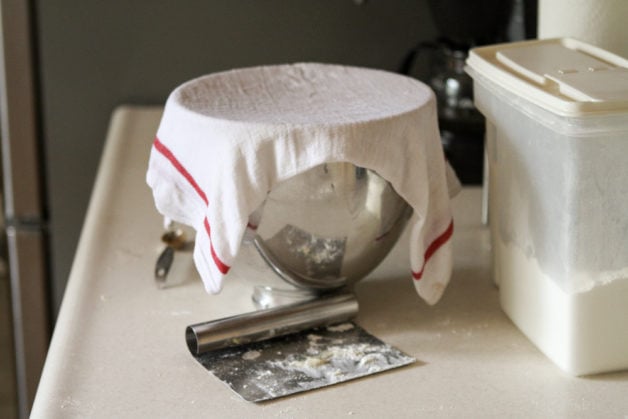 The amount of time this will take depends on the temperature of your house; it’ll be faster in the summer than the winter!

Turn the risen dough back out onto the floured counter, divide in half, and roll each half into a 12×7 inch rectangle.

Time to turn this into some cinnamon bread! Mix the cinnamon and sugar together in a bowl. 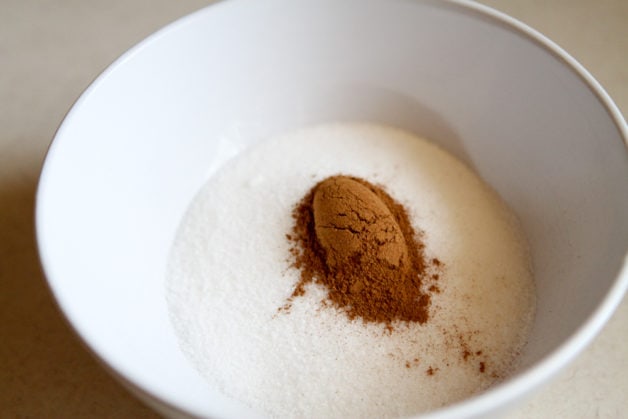 Brush each dough rectangle with water, and then sprinkle with cinnamon sugar. 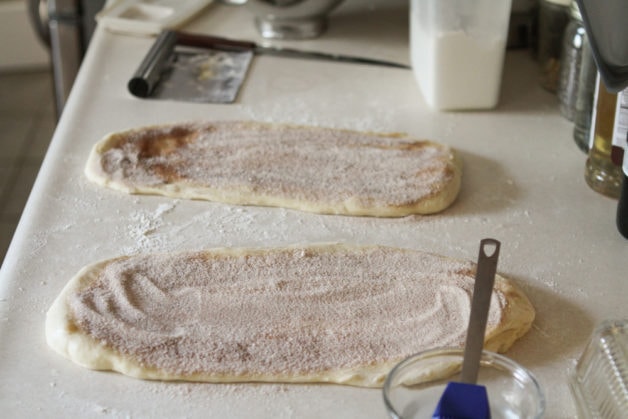 Roll up, starting from the short end, and place each loaf into a greased 8×4 inch loaf pan. 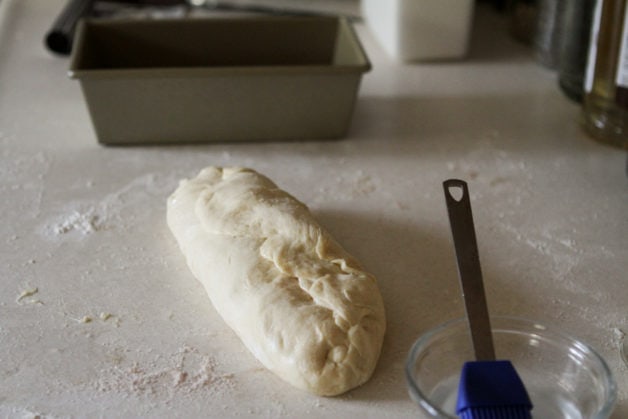 Cover with a wet tea towel again, and let rise until doubled, about 30-45 minutes. 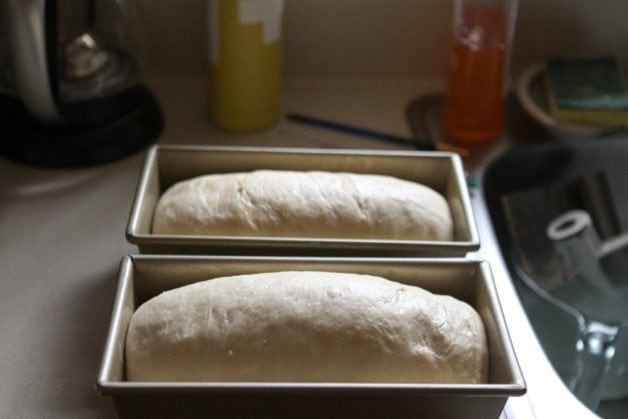 Preheat your oven (always let it fully preheat for yeast bread!) to 350° F. Bake loaves in the preheated hot oven for 25-30 minutes; remove loaves from pans, and let cool on a wire rack. 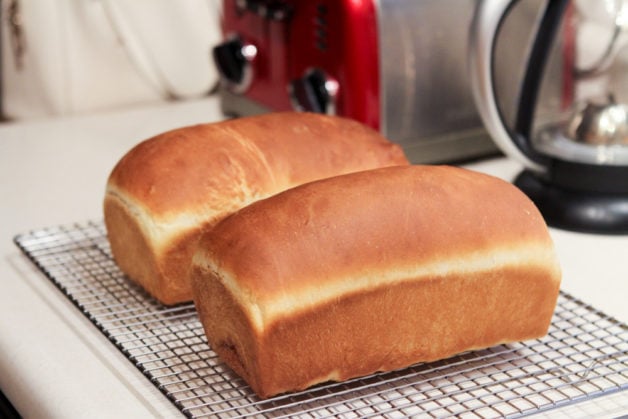 I really, really love these cooling racks because the wires are so nice and close together; they don’t leave indentations on fresh yeast bread.

I always want to eat the bread right away, but it is much easier to slice if you let it cool for a little while first. 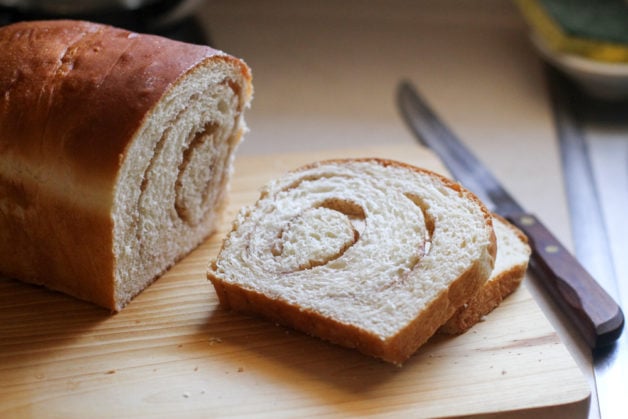 This is good toasted, or you can microwave individual slices and butter them.

I’m sure it would make good French toast too, but I have never tried that; my girls always eat the bread as-is!

Scroll down for the printable recipe.

I like Gold Medal Unbleached or King Arthur All-Purpose flour.

This bread is a great way to use slightly soured milk; the sourness is not at all apparent in the finished bread.

Ohhh, whoops! That was a typo; it should be removed now.

Thanks for letting me know it was there!

Can this bread be frozen?

Yep! Just put it into an airtight plastic bag. I freeze mine all the time.

Thank you for sharing the recipe! May I ask where you bought the Hello Kitty Pyrex measuring cup? I'm huge Hello Kitty fan and would love to buy one for myself!

I bought it right from Pyrex! They have a whole character collection page: https://www.pyrexhome.com/shop/character-collections

Does anyone remember the post where Kristen (or Kristen!, if you read this) shared her microwave chocolate oatmeal recipe? I'm daydreaming about it and don't see it, but I know it was fairly recent!

I shared that in an instagram reel about a year ago, but I don't think I ever shared it here. I will put that on my to-do list.

Hi Kristin! Do you have a link for your digital thermometer? I have been needing a new one and I love all your recommendations as they work well and last forever!

Sure! It's a ThermoPop and I really like it. It's not quite as nice as the one I left at my house when I moved out, but it is way, way cheaper and it works fine. https://www.thermoworks.com/thermopop/

I used to have a Thermapen: https://www.thermoworks.com/shop/products/thermapens/