The cow that we normally get out milk from has adopted a calf, whose mother rejected him/her (I don’t know much about the calf!). So, the calf is getting most of the milk, the farmer’s family is getting the rest, and our milk came from the grocery store this week.

I spent $38.13 at Aldi and $47.45 at Weis. Unfortunately on that shopping day, I left my grocery lists at home. Surprisingly enough, I remembered almost everything on my list. Somehow, though, I completely forgot to get mozzarella cheese. I don’t know how that happened because I use it every single Friday to make pizza.

So, I made a trek to the local grocery store and bought a pound of mozzarella, 2 pounds of peaches, and a 1.75 quart package of vanilla ice cream (to make root beer floats!) for $7.20.

Here’s my produce (except for the watermelon, which inexplicably ended up in the non-produce picture again!). 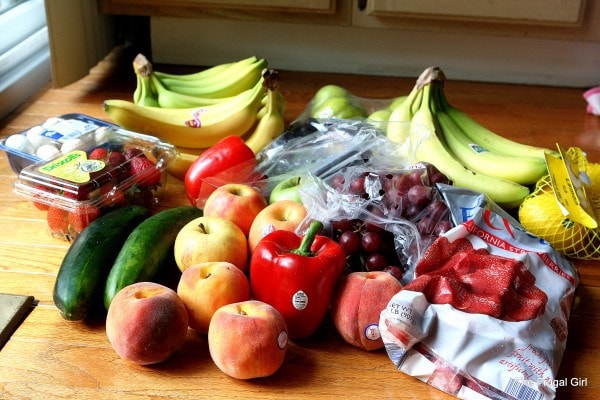 The watermelon and everything else. 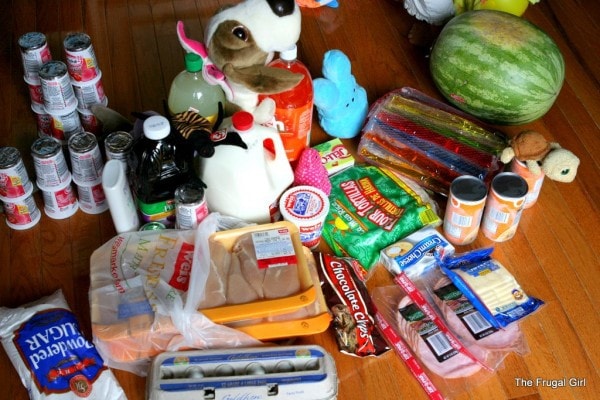 Dinners are as follows. Some of these are repeats from last week…due to my husband’s tonsil problems, we didn’t end up eating some of the planned meals.

Wednesday (This is Joshua’s birthday, so he chose the meal)

Hi Frugal Girl, Just a smal comment on the sheets. Something I do is drape my sheets across all the doors in the house. Usually twins work better than fulls or queens. If I hang them in the am they are usually ready to go back on the beds in the evening. Thanks for all you do!