First, congrats to Stacy D., commenter #3, and winner of the Shabby Apple $50 giveaway. It’s funny…just recently I was thinking about how random.org doesn’t often seem to pick low-numbered entries, and then it goes and proves me wrong by choosing commenter #3!

By the way, it was fun to read your comments on that giveaway…I clicked on over to Shabby Apple a bunch that day to look up the dresses and skirts you guys chose as your favorites. Isn’t it addicting to look at their site??

I’m no expert gardener, but even a black thumb like myself can manage to grow a few things.

Well, they’ve been hanging off my deck, dead, all winter, but look what’s happened recently! 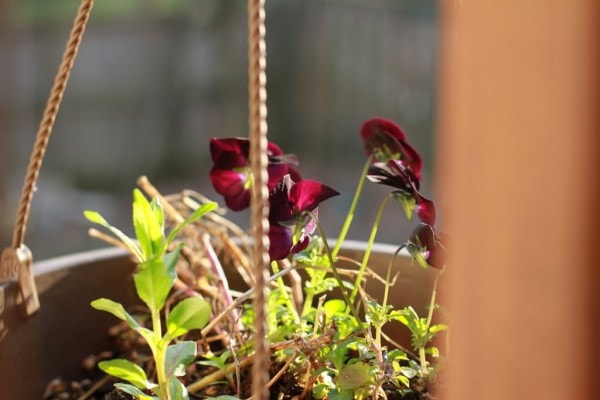 They haven’t quite returned to their full glory, but there are a bunch of teeny new plants popping up in the pot, so I think they’re going to fill the hanging pot before long. 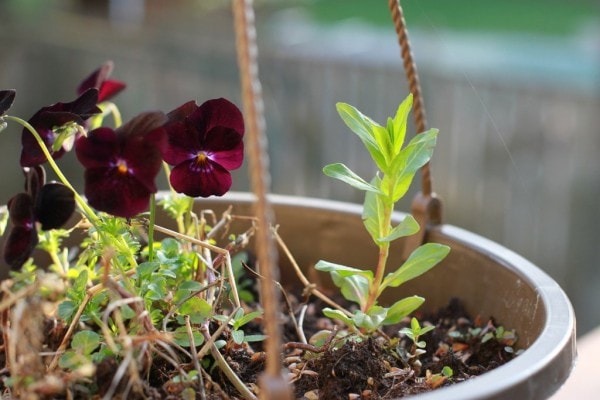 There’s a renegade something-or-other growing in the pot next to these flowers and I’m very curious to see if it’s a weed or not. 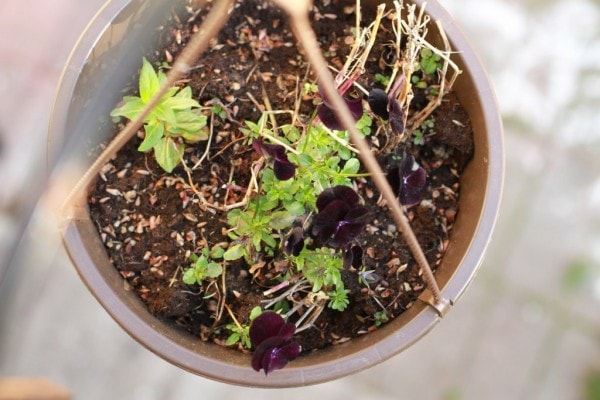 In another pot on my deck, I’ve got some green onions growing. They’re from the grocery store, but I planted them after I brought them home, since they had roots.

These have already been clipped several times, but they seem to have at least one more round of growing left in them (after being clipped a number of times, they generally die off.)

Also sprouting in the pot: marigolds from seeds I saved from last year’s flowers. I love how easy marigolds are. 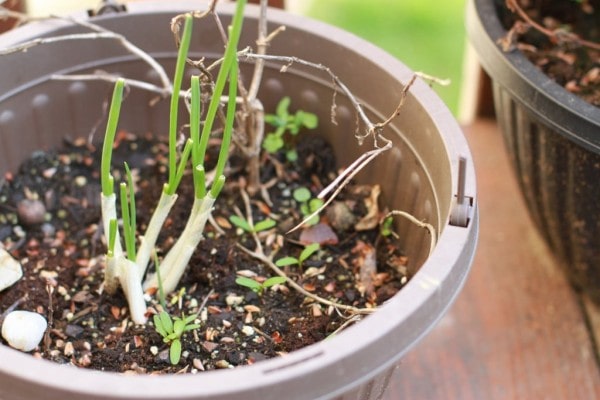 Basil is another idiot-proof plant to grow. These are my leetle baby seedlings, which really can’t grow fast enough for my taste.

I keep checking every day to see if a new set of leaves has started growing yet. 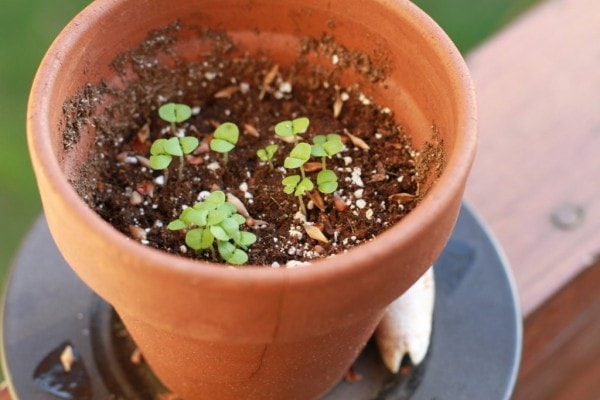 I bought a bag of tulip bulbs from Aldi last fall and let them sit on a shelf inside all winter long.

So, I decided to stick them in the ground this spring and see what happened. I thought maybe it was too late, but they’re popping up now! 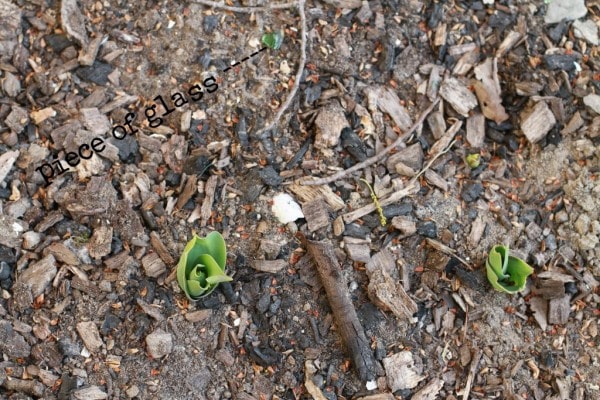 Why the glass? Well, I have a terrible, horrible, no-good, very bad problem with voles here at my house. They eat almost everything that I plant directly in the ground, which is why pots are my dear friends.

I’d read that if you put crushed glass around the base of something you plant, though, that voles will leave it alone because they won’t like how the glass feels. The internets aren’t unanimously sure that this is effective, but I figured it was worth a shot. So, I grabbed some glass from the recycling bin, smashed it, and put it in the ground with the tulip bulbs.

And if they come up again next spring, I’ll count this method effective.

(To clarify, the glass goes underground, by the bulb. The piece of glass in the picture just happened to avoid being buried.)

Speaking of voles…this hosta has bravely poked its head up. I give it less than two weeks, since voles adore hosta and I haven’t successfully grown any outside of pots. 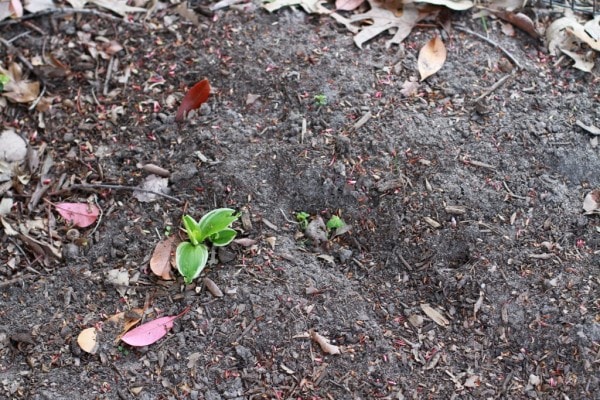 I filled in some bare spots in the lawn with grass seed recently. 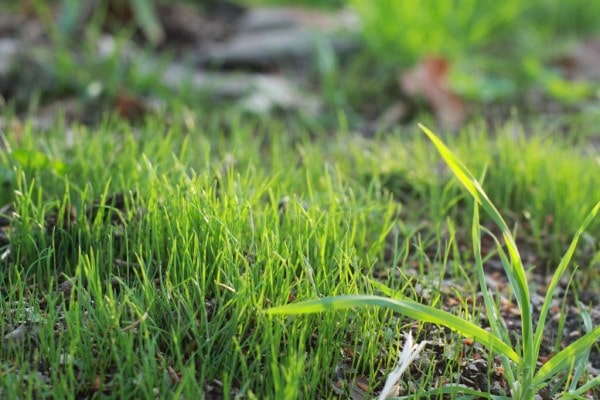 I always have such little faith in grass seed. I spread it, cover it, water it, and have no confidence that it will ever come up.

It does sit there, looking ever so unproductive for what seems like forever. 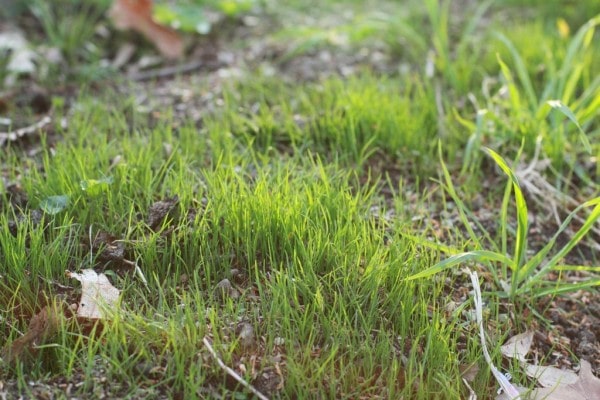 And then one day, poof! There are all these grasslings making their way up out of the ground. 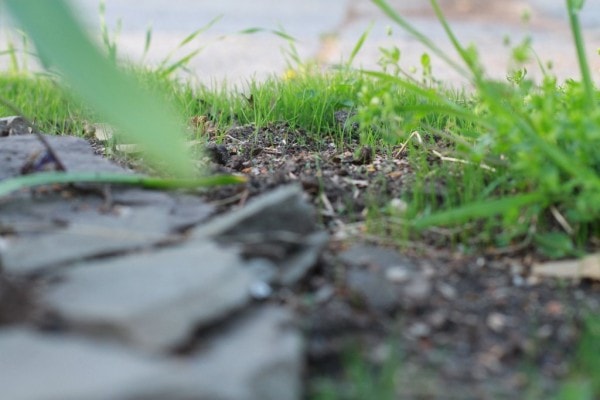 Your plant growing beside your violas looks like a milkweed to me :) Monarch Butterflies like them here in OK.

Live and Learn-Toss and Turn

Maybe I should try to grow more things in pots because the critters are abundant around here including voles. However, the deer don't mind eating out of pots. :(

It's nice of you to share your life with others. Every little article, or piece of advice, you share, is something others can feel a connection with. Even if its strange, weird, or ridculous we all can be a part of it. Most people don't want to take the time or effort to involve others, and so I thank you for doing that. Your recipes are fun and interesting. Plans and ideas always find someone who is looking for that information. Thanks

Definitely a weed in that pot with your violas! ;)

I heavily sprinkle cayenne pepper (which I buy in industrial-sized containers) around seedlings that the voles go after. You need to reapply every couple of days and after rain, but for a small garden it's not too bad. It seems to keep the voles away. It also seems to work for rabbits--if you happen to have that problem too.