What about frugal decorating tips? I don’t own any decorations and I don’t plan on buying any, but I’d still love my house to look Christmasy!

I am certainly not the world authority on Christmas decorating, and I have a remarkable dearth of un-purchased decorations. I’m also something of a minimalist, so I like to keep my decorations simple and somewhat sparse.

But in case you are still interested, here’s a little peek at my decorations, 99.99% of which have been purchased here and there during post-Christmas sales.

This snowglobe is one of two from an Eddie Bauer after-Christmas sale. There used to be three, but one of them (my favorite, of course!) fell to its demise years back when Joshua was small and was touching things he wasn’t supposed to be touching. Ahem. 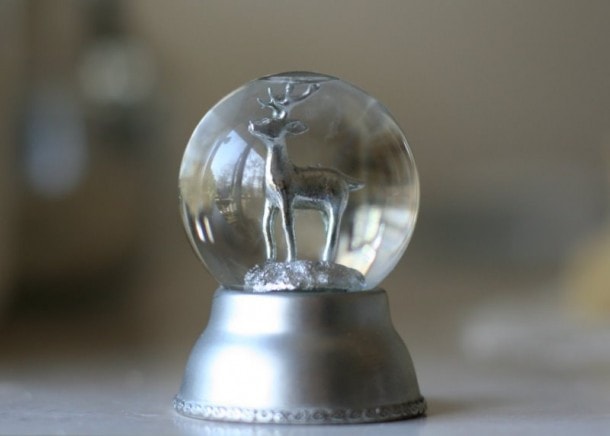 I got this snowglobe on clearance at Target after Christmas. I love how much snow is inside of it, as so many snowglobes have just a few flakes. 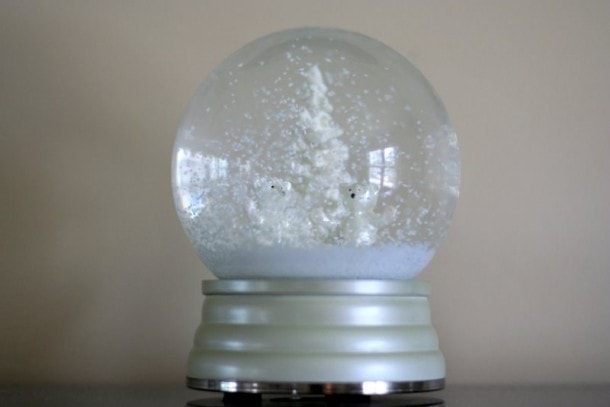 My sparkly candle house came from an after-Christmas sale at Bath and Body works. It was filled with soap and bath stuff in my favorite scent (Moonlight Path), and though I’m not certain that the house is supposed to be a candle-holder, I think it works very well that way. 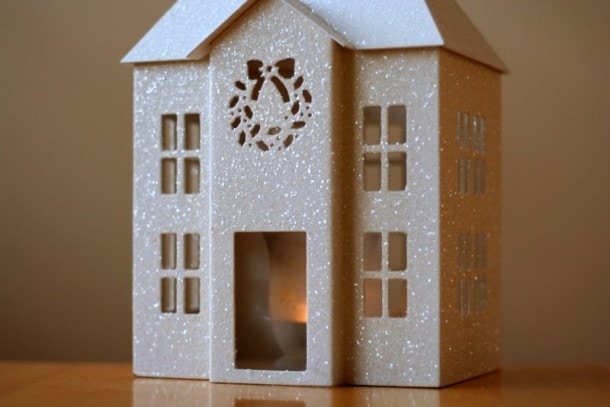 I own two sets of these Christmas tree candleholders from Hallmark. The first set was a gift from my sister and the second one is from (you guessed it!) an after-Christmas clearance sale. 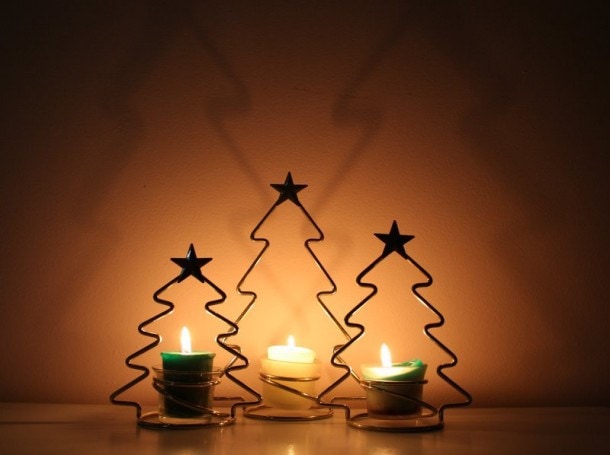 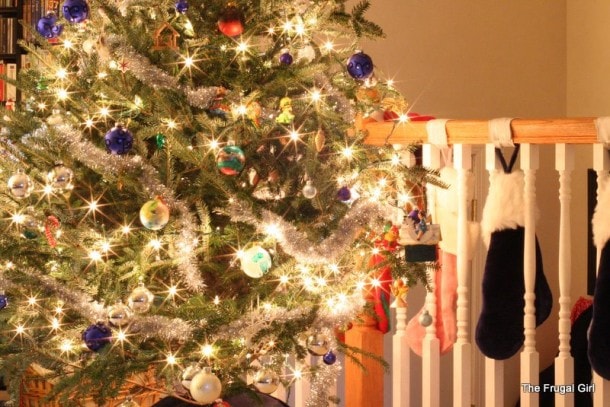 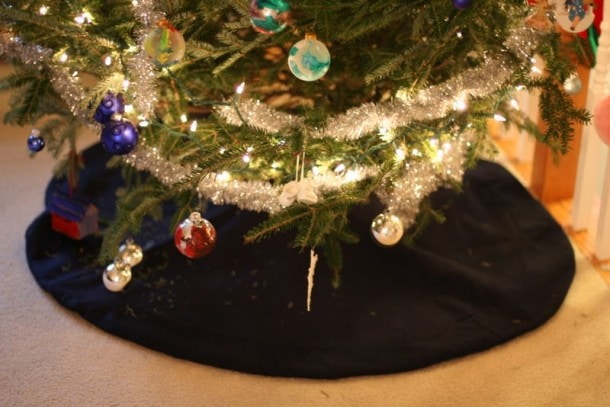 These are our stockings, which, to the best of my memory, were not purchased on clearance. 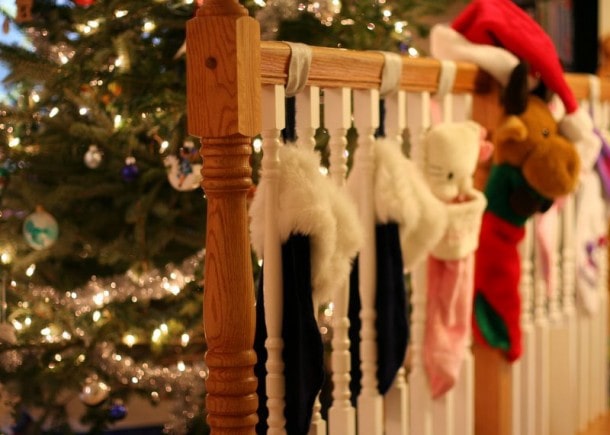 We’ve never had a mantle in any of our homes, so I’ve always had to find other ways of hanging them. This year I used some ribbon (purchased on clearance after Christmas). The ribbon is just pinned right now, but next year I was thinking of sewing some velcro onto the ribbons to make a neat closure. Wire holds the stockings up, so the ribbon is just for looks, and the velcro would have sufficient holding power. 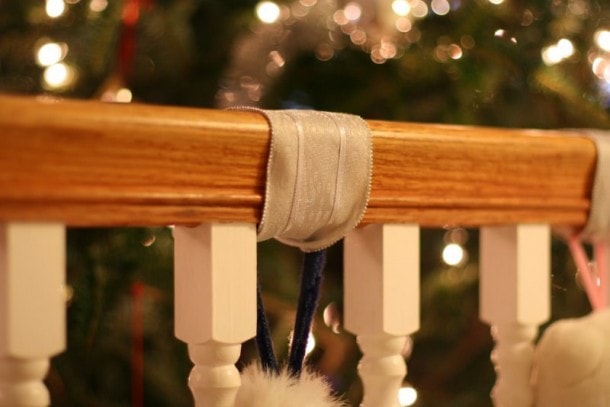 So, there you go…a small tour of my Christmas decorations. There’s more than this (I have a front-door wreath that I bought for a few dollars after Christmas one year, I have more candleholders, and we have some outside decorations as well), but this post is getting kind of picture-laden as it is. Hopefully, though, it may inspire you to pick through the after-Christmas carnage at a store near you (or through the never-ending supply of Christmas stuff at Goodwill!) to find a few treasures to use next Christmas.

How do you decorate without spending a bundle?

I like to cut vases of holly, boxwood, & hemlock greens from my garden. When we first bought our home, I would hit seasonal local crafts fairs for inexpensive, creative ornaments. I'm at the stage where I don't really need to buy anything, and I go for a really minimalist holiday decorating approach. I've given a lot of my early stuff away to younger folks who are still in the acquisition stage.

I bought a bunch of Martha Stewart Christmas decorations (blue and silver) a few years ago on clearance. I believe they were like 85% off so they were really cheap. I do love a good clearance sale.

I haven't actually used them yet though. We've gone home for xmas every year since I bought them. I see no sense in decorating if I'm not even going to be here.

I love Amber's idea: making ornaments out of salt dough! I'm sure your ornaments will be a big hit and I am dismayed I didn't do that for my children. Apart from our family pictures, my most prized possessions are all the drawings and crafts my children made while growing up. They are 23 and 19 and we have their hand-made ornaments up on the tree.

Our Chistmas tree ornaments are gold and red, with lots of white lights. We decided on having a theme, and I really recommend it for people just beginning their ornament collection.

Hi there. I managed to be at Hobby Lobby on their day for 50% off Christmas deco items, and bought one large roll of red ribbon, of the wired variety--4 bucks for 90 feet. I've used it all over my house--in my windows to hang a single colored christmas bulb--if I had more gumption I probably would have done groups of 3 or 5 in varying lengths. I used a bit on all my lamps to tie bows with long tails. I also used some, in a big bow with two long curling tails, on the wall where I display all of our Christmas cards. I still have ribbon left, which I've used to tie all of the teacher gifts with. I'll probably reuse it all next year, either on gifts or to decorate! Seriously, the best four bucks I've ever spent on Christmas stuff!

I outsource my Christmas decorations. That is, I don't put up any at all. My girlfriend (hopefully soon to be fiance) and I both have some ornaments and stuff we were given as children and when we build a home together we can use those.

As for right now, I just kind of enjoy what I have. I was thinking of making a print of one of my favorite slides I shot and hanging that up for Christmas but I never got around to it.