Four gifts I made with photos 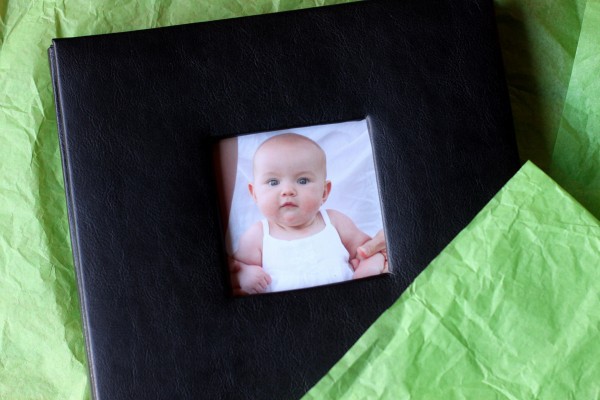 The fun thing about giving photo gifts is that the gift is as unique as the photo…I find that they make really meaningful presents. And if you’re as shutter-happy as I am, by the time December rolls around each year, you probably have plenty of material for photo gifts.

I made a scrapbook for my sister, like I did two years ago. 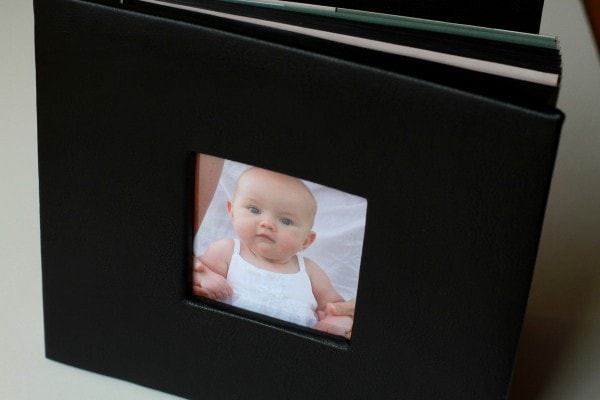 This one covers the first year of her first girl’s life, and I’ll just show you a few pages. I apologize for the poor quality of these photos. I’m such a disaster at taking pictures of pictures…they never turn out very sharp! The printed photos really are good quality in real life, though. 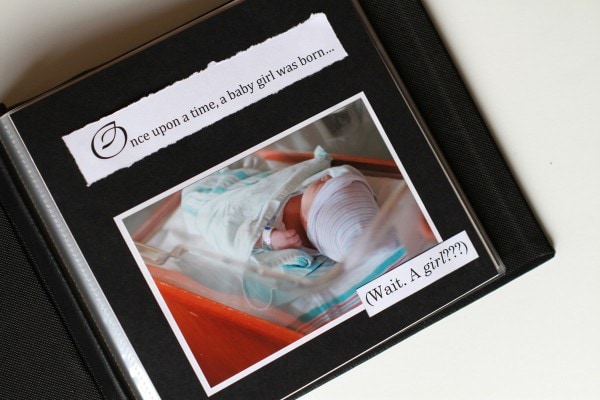 We were all so surprised that Annalise was a girl (my sister and her husband didn’t find out the sex ahead of time). 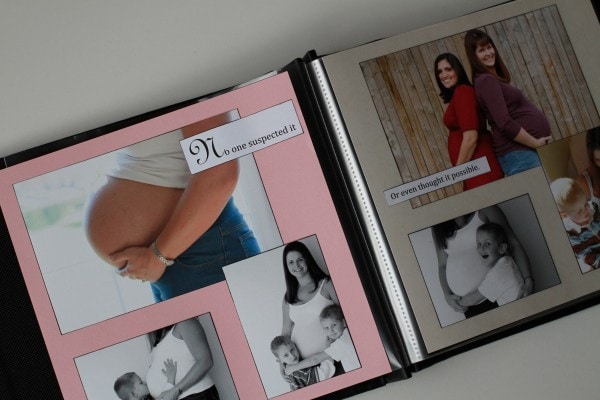 She has three older brothers, so we all sort of expected that she’d be a boy too! 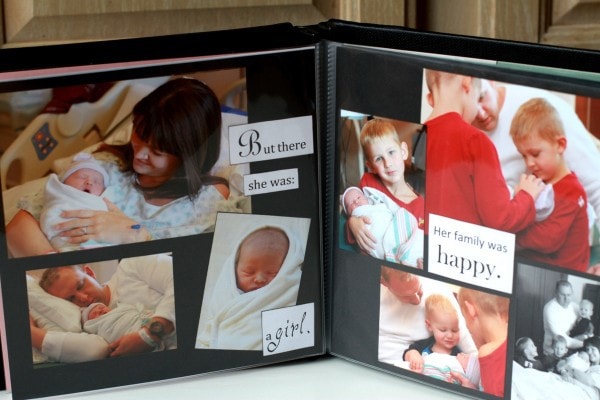 I didn’t actually do a whole lot in the way of dedicated photo shoots for Annalise over the year, but since I see my sister pretty often and since I always have my camera with me, I had a good selection of Annalise photos to choose from. 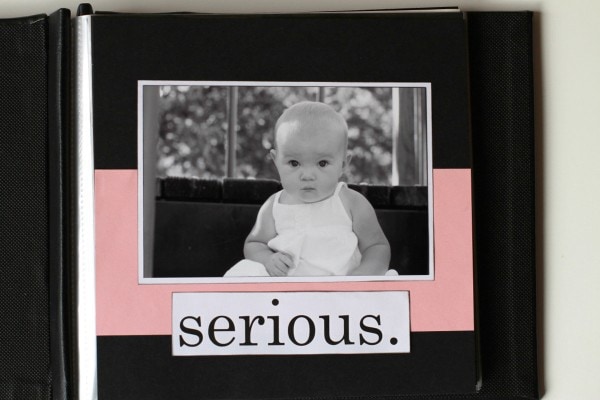 Going to the beach twice with my sister didn’t hurt. 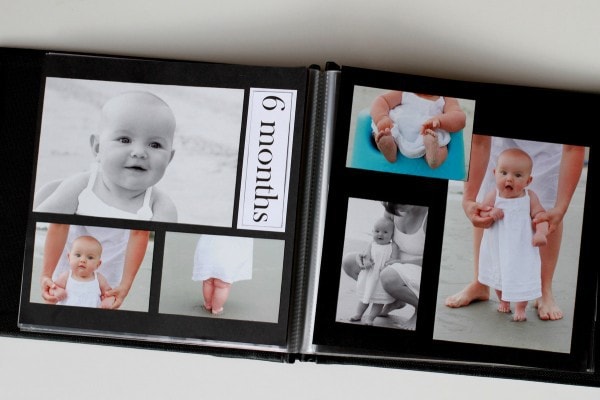 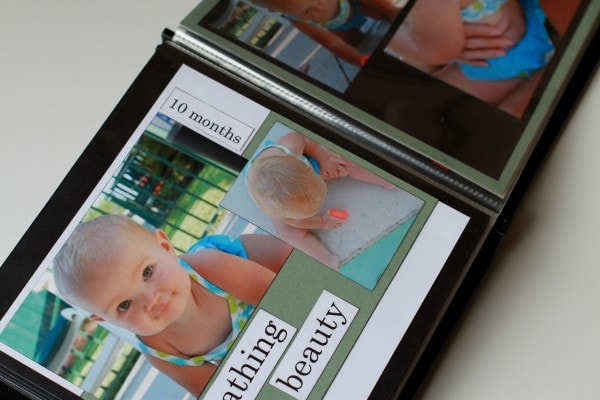 Remember the purple dress photos I took of Adriana and Annalise? Here’s that same duo this past summer, when Annalise was still bigger than Adriana. 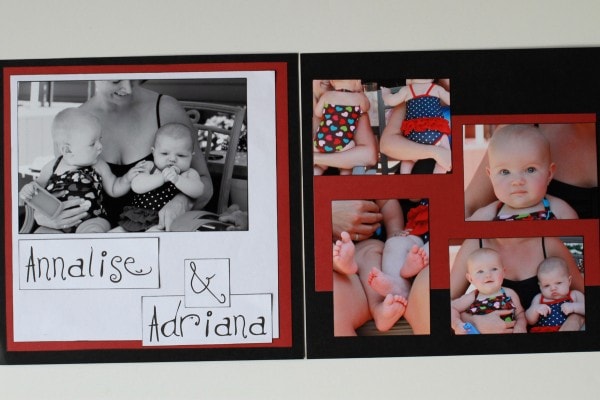 I finished this up shortly before we had our Christmas get-together with my family…Mr. FG says it just wouldn’t be Christmastime if I wasn’t frantically finishing up a scrapbook last minute. 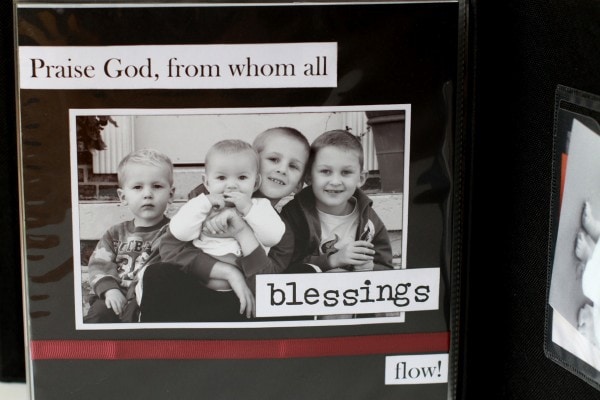 You wanted to see what I made for Joshua too, right?

I bought this matted, framed picture at Goodwill because I wanted to frame one of Joshua’s photos for him to hang on his bedroom wall. 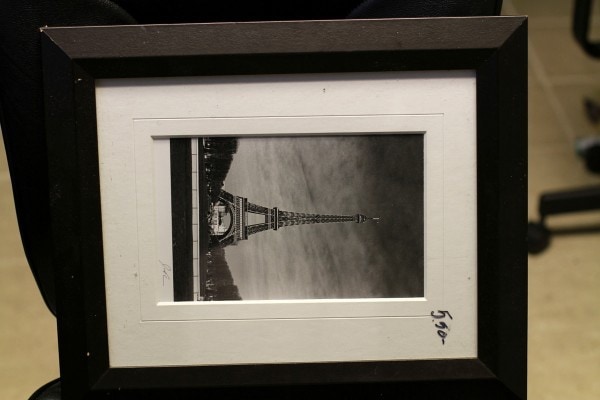 It wasn’t the sort of frame that was meant to be taken apart (it had that brown paper glued over the back of it), but I really liked the mat and the large size of the frame. 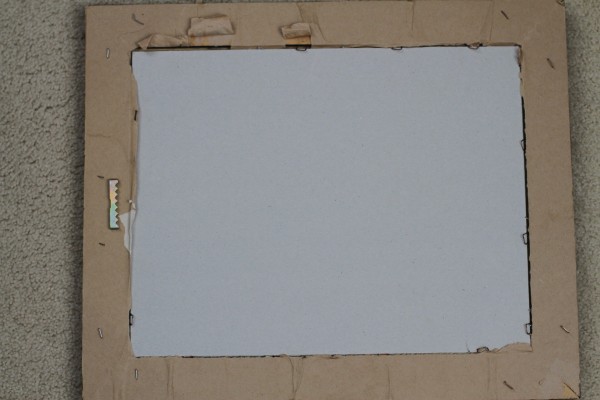 So, I cut the paper off, bent the metal pieces that were holding the frame in, cleaned up the glass, touched up the nicks on the frame (using a Sharpie marker), and printed out one of his best 365 photos. Doesn’t it look nice? 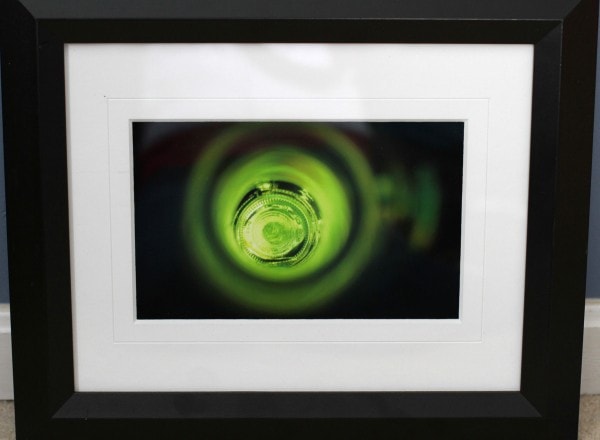 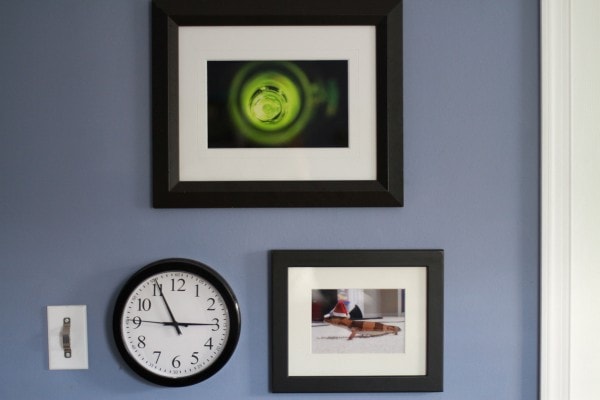 Originally, the small clock was the only thing on that wall, so because things look best grouped in threes, we put together another frame for him.

I found an old plain black frame, and added this mat I’d picked up at Goodwill. 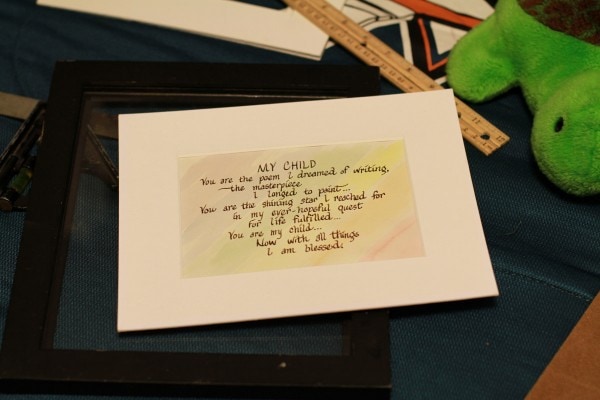 The sentimental rainbow-colored poem thingie was just taped in. 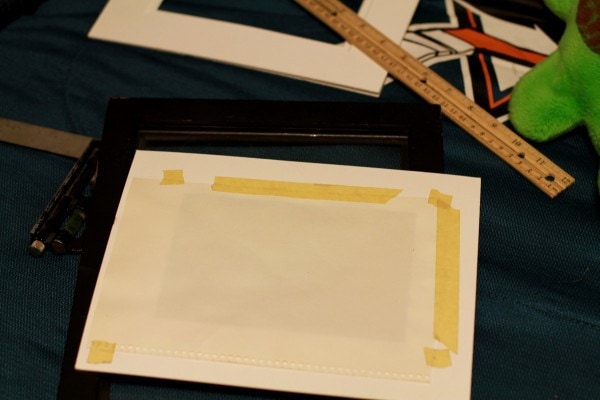 So, we untaped it, printed out a photo that Joshua liked, and put the mat and photo into the frame. 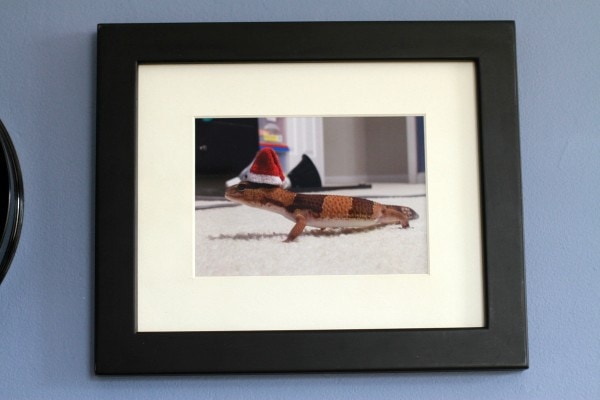 Having the clock at the bottom is a bit unconventional, but I like it because of that. 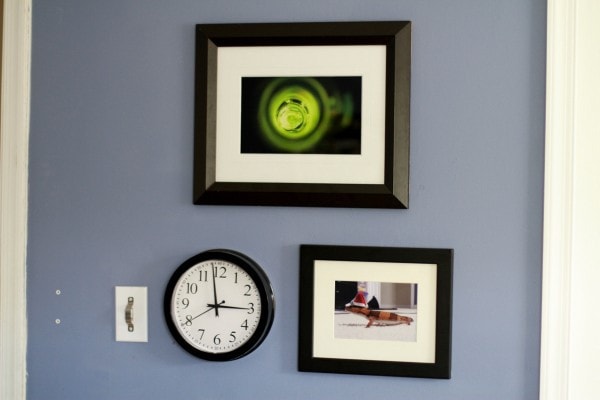 I made a calendar for Mr. FG’s grandma. I made one last year and she really liked it…she hung it on her bedroom door so that she could see the happy pictures every morning when she woke up.

I used mpix to make this calendar, and while the print quality is great, the process of making the calendar is a little trickier than on Shutterfly, the site I used last year.

I used a shot of the neighborhood dock for the cover (we had lots of good snow for sledding last year!) 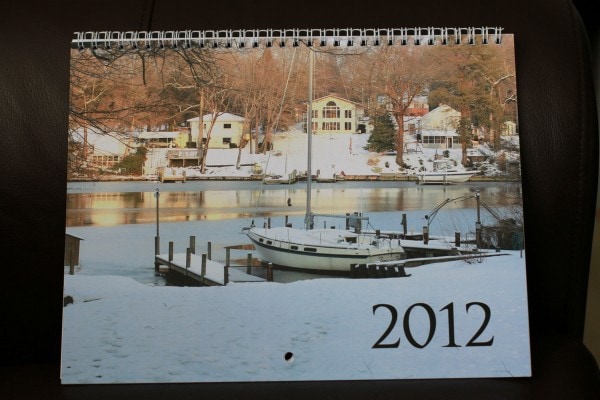 And then I picked one picture from my 2011 files for each month. I have such a hard time picking just one photo, but I like the look of one photo per month better than the layouts that let you pick multiple photos. 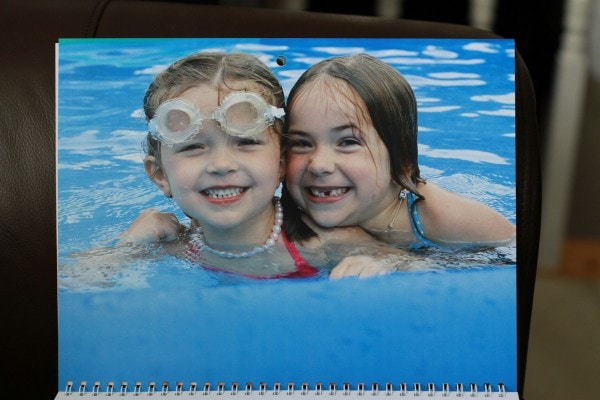 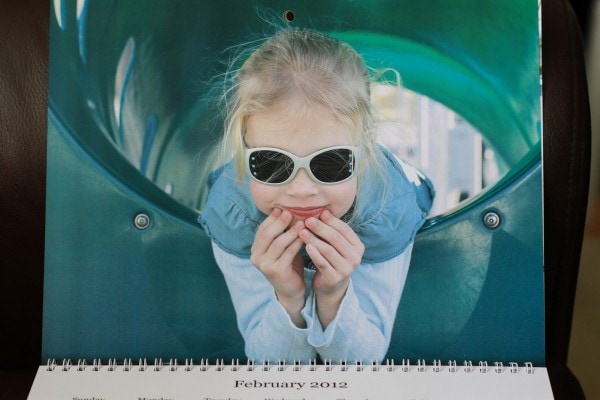 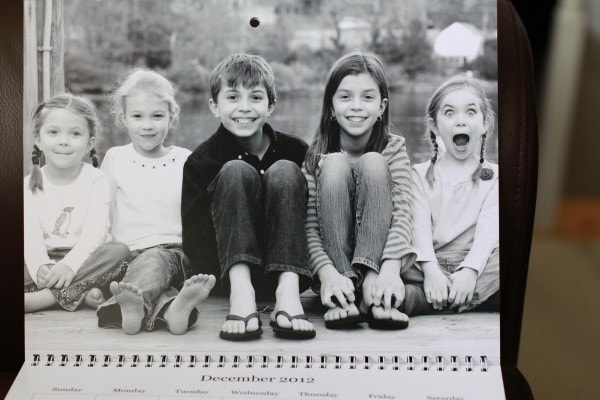 A calendar costs about $20, so it’s not a terribly expensive present, and it could bring a lot of joy to someone all year long. It makes a great gift for someone who doesn’t want clutter or who has limited space.

Lastly, Mr. FG’s mom said that his dad would like a photo of us for his office, so we got a friend to snap a few photos of us after church one Sunday. It was freezing and we didn’t have a lot of time, but given that and the fact that it’s hard to get six people to look good at the same time, I think it turned out pretty well. If you want to give a framed photo as a gift, here’s a small tip that will take your photo from so-so to fabulous: pick a frame with a mat.

It makes so, so, so much difference. Even a not-too-great photo will look 93% better with a mat. Try it! You’ll be so happy with the results.

Do you give any photo gifts at Christmas? I’d love to hear any new ideas you have.

One of my coworkers died unexpectedly over the holidays after having worked in our office for 18 years. A couple of my coworkers had the idea of creating a photo book of photos collected of her over the years (we have an annual work retreat where we end up taking a lot of photos of each other) to give to her daughter. It was a tragic reason for making a photo book, but I was really impressed with the thoughtfulness of the idea.

Who is that absolutely adorable girl all the way to the right in the December 2012 calendar picture?! Her face made my night! What humor!

Hee. That's my niece, who is 10 days younger than Zoe. She's got enough personality for about 5 children. :)

We chose a picture of my 3-year old daughter with her cousin from our trip to the mainland earlier in the year (we live in Hawaii), had her color a few popsicle sticks, and I hot-glued them together to create a picture-frame ornament. It was absolutely nothing fancy at all, but really sentimental.

I craft ornaments with my daughter's picture on them for relatives. Usually it involves some kind of drying clay for a border, a cheap bulb, and a simple glaze to seal the picture.

ps - another idea for old frames is the 'fingerprint' design. Get the kids to make patterns on the old frame using their fingers dabbed in paint, for a personal gift of them at that stage in life. This year my Kids did something a little different in that they designed their own cardboard frames for their annual school photo to give to Grandma's etc...