Every week, I post a picture of the food that has gone bad over the last seven days. I started doing this in March of 2008 to help motivate myself to use up my food instead of wasting it and it’s been very effective. Since it helped me so much, I invited other bloggers to join me in posting their food waste photos, and Food Waste Friday was born. 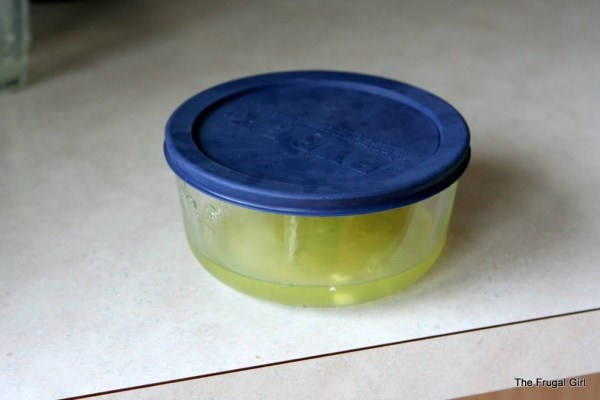 Usually the food that I waste is composed of produce, but this week I did manage to use up all my fruits and vegetables. The bowl above contains several egg whites that were left when I made a Key Lime Pie for my husband (it was one of the 14 things I did for him during our 14 Days of Valentines). I was going to scramble them up for breakfast or use them in baking and somehow, I just never did. If only good intentions counted for something, huh?

I also wasted some other protein, in the form of chicken. Remember how I said I was going to try cooking chicken in the Crock-Pot? Well, I did, and I was none-too-thrilled with the results. It was really easy, and very un-messy compared to roasting a chicken, but the meat had a weird flavor and texture (it was almost mushy). I don’t know if I maybe cooked it too long, or if the chicken I bought was going to have a strange flavor no matter what, but I don’t think I’ll be slow-cooking a chicken again. We did eat it for dinner, and with the help of copious amounts of cranberry sauce, made it through part of the leftovers (which tasted more and more odd as time went by), but we just could not manage to eat it all. I threw it out earlier in the week, which is why it’s not in today’s picture.

I suppose if I was really, really desperate, I would have eaten the chicken, but I’ve learned that sometimes, unless you’re literally starving, it’s just not worth it to eat something you really loathe. (The NonConsumerAdvocate had a similar experience with some pepper(!) bagels this week.) On the upside, I do know that I can prevent this particular sort of food waste from happening again simply by roasting my chickens the traditional, albeit messier, way…in the oven!
________________________________________________________

I don't do chicken in the crockpot - at least, not whole chicken - if we're going to eat it as, well, chicken. But that's how I get chicken stock for soup, and I pick the meat off and shred it up. That meat is frozen for use in soups, and sometimes my husband makes barbecued chicken sandwiches from it. I've occasionally done chicken breasts in the crockpot for main dish items, and we've enjoyed those.

This was my first official Food Waste Friday and I did... well, let's not talk about that! I was pretty confident that next Friday's post would be much better. Unfortunately, we went without power for 3 days. I haven't had the gumption to tackle the fridge yet but I'll have to do that tonight. Hopefully, the casualties will be small. Gulp!

I don't cook chicken in the slow cooker anymore either. We've tried it a couple of different ways, but I still can't get over the texture of it. We do however use it for lots of other foods. This weekend we had a Brownie sleepover and we put some hot chocolate in one, some soup in another and water and hotdogs in another. We set them up before we left for the morning tour and everything was done when we got back for lunch. You don't want to keep 20 7 and 8 year olds waiting for lunch after walking in the snow all morning! At home, I use it for soups, stews, roasts, spagetti sauce and chilis. There's nothing like coming home to your dinner being already made!

Hello...iam very new to the site,an iam enjoying reading it everyday to get new ideas on everything from what to cook for dinner,snacks...ect..

I saw you on TV...an you said to make out a weekly plan for dinners..i have NEVER done that before..so i tryed it..OMG it was so nice.I talked to all my boys we figured out what we wanted to eat every night,i looked in my pantry to see what i needed to get at the store( not WAL MART ..I shop at shop a lot ) an i got JUST what was on the list. And for a family of 6 (my son lives on his own but still eats dinner with us sometimes ) i SPENT...52.00 !!! I was so shocked i called all my friemds an told them an told everyone at work. Plus it was nice everynite i didnt have to wander what i was fixing that night,I KNEW when the kids said " whats for dinner" ..or they could have looked on the frig an seen the day of the week an what we where going to have....DEFENTLY something my family will contine to practice...plus saving all that money every week is GREAT. Before i went shopping without a list an it was nothing for me to spend 200.00 - 250.00...just grabbing what i THOUGHT i needed,then when i got home an looked i already had it in my pantry...wander how many other people that has happened to...what a waste of MONEY.

Thank you again for all the great tips on saving money...KEEP them up...WE are reading them an using them all....

When I have leftover eggwhites and (extra time) I turn them into meringues using a recipe from my mil - very easy it is just basically eggwhites beaten until stiff and added sugar along the way bit by bit. They cook at low temp in the oven for an hour and then you let them sit over all night. great to clean out the freezer for all those frozen whites too!