I kind of feel like I must be losing my touch or something. 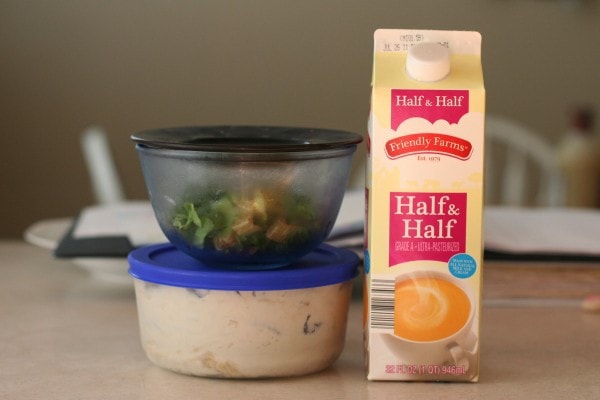 The lettuce was left over from when we had tacos, and it had turned kind of brown and yucky. I could have used it in a salad instead of spinach, but spinach IS more nutritious, so I suppose that was sort of a good choice. Better to compost green leaf lettuce than spinach.

The sour cream dip is still in my fridge because I’m waffling on whether it’s bad or not. It doesn’t smell funky and it’s not moldy, but it has been in the fridge for…a while.

I’m actually not sure how long, which is why I’m a little conflicted about what I should do with it.

The half and half container is almost entirely empty, but the last bit in there was very cheesy smelling. Note to self: make sure you don’t store the half and half in the refrigerator door (it’s warmer there).

Also, I bought some peaches from the store the other day, put them into a paper bag to ripen, and now they’re starting to rot while simultaneously maintaining their rock hard status. Sigh. I’ll probably manage to save them by adding them to a smoothie or something, but if I have to throw some of them out, I refuse to take responsibility.

The peaches must bear the blame.

Or perhaps the food system that harvests them while they’re green and rock hard.

I think I’m going to give up buying peaches until the local ones are ready. Grocery store peaches are just no good 95% of the time.

To make myself feel better, I checked my food waste photo from 3 years ago, and it’s pretty bad: Food Waste Friday-7.5.08.

(On a random note, why in the world did I make my pictures so small back then?? I think that was only my third post on The Frugal Girl, so perhaps it can be blamed on new-blogger-itis.)

Anyway! I’d really, really like to have a no-waste week next Friday, and I’m going to try my darndest.

(Not that I wasn’t trying this week.)

I've developed a fairly reliable technique for grocery store peaches (we didn't have "local" ones in Minnesota!):

I've done this with about a dozen peaches so far this season, all purchased at the grocery store, and only one came out mealy and flavorless. The rest were juicy (after a day or two of ripening in a paper bag with a banana in some cases) and sweet.

Our local peaches are either rock hard or too soft. If we can't eat them before they hit the mush stage I freeze them for smoothies later. Although this year I canned them in my first batch of jam ever!

I'm with you on the grocery store peaches. I say boo hiss to them. And my grocery store makes it worse by calling them 'ripe and ready' or 'tree ripened.' They can't be tree ripened if they're not ripe. GRrrrr booooo hissssss at that. Unfortunately I'm not really in a peach growing area, but I can still find a few good almost local ones.

And as for your questionable dip, I first use my eyes, then my nose, then tentatively my tastebuds to tell me if food is good, rather than an expiration date or memory of how old it is.

Two mushy tomatoes and half a bunch of cilantro=the homemade salsa that never was. Sigh. So disappointed in myself! But really, I'm trying to do as well as you do-and still have a ways to go!

I don't have food waste yet. I do have some bananas to bake and tons of squash from a friend's garden to cook. Tons of garden cucumber also.