Which Dutch Oven do you use? Do you have a recommendation on what I should be looking for? Which recipes do you use it for? 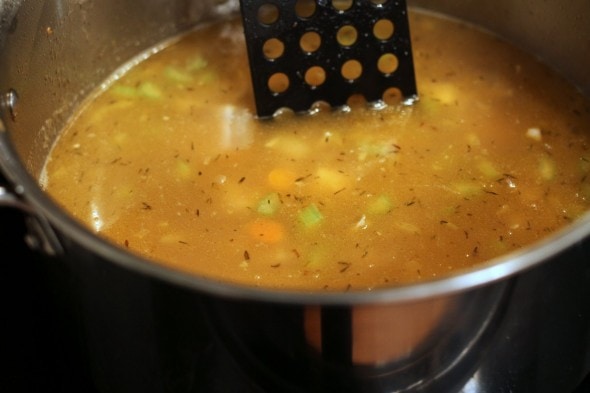 I have two dutch ovens.   One is an enameled cast iron variety, and the other is an All-Clad stainless steel pot.

The Tramontina cast iron pot like I own costs a little less than $50.   I’ve never owned a Le Creuset Dutch oven, but this is a similar product except it costs $50 instead of $300.

Cook’s Illustrated does say the Le Creuset is their favorite pot, and they still recommend the Tramontina, but their best buy option is now the Cuisinart version, which is $169.

I don’t use my cast-iron Dutch oven nearly as much as I used to, mainly because I got an All-Clad stockpot($258) a few years ago, and I really prefer it.   It’s not technically a Dutch oven, but it performs all the tasks I used my Dutch oven for, so I consider it a substitute.

It IS an expensive pot, but I use and love it so much, it’s felt worth it to me.

Well, interestingly enough, I have way less trouble with food sticking to the bottom. And when it does stick, I can scrub with a lot more abandom than I can with my enameled pot (it’s not hard to scratch the enamel!) 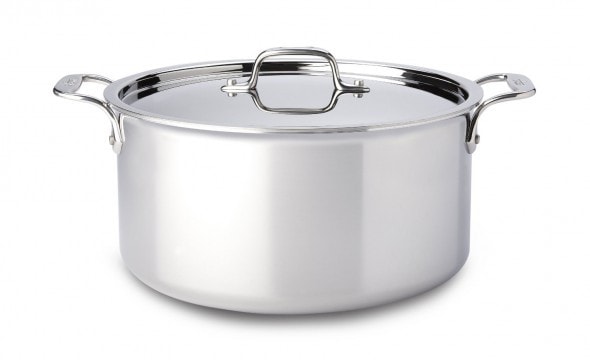 Along the same lines, I can use whisks and other utensils in the stainless steel pan, but those tend to damage the enamel in my cast iron pot.

I also like that the stainless steel pot is so much lighter.   Cast-iron is great, but it is a lot to lug out.

And lastly, the stainless steel pot heats up a lot faster than the cast-iron pot.

What do I use it for?

I use my pot for making soups, browning meat, heating milk for yogurt, cooking pulled pork in the oven, making jambalaya, cooking apples for applesauce, making chicken broth and more! 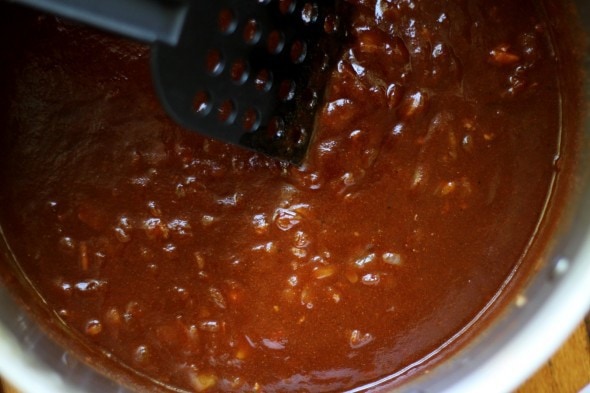 I only use 8 pieces of cookware (I don’t count my cast iron Dutch oven because I never use it anymore), so each of those 8 pieces gets used a lot, including my All-Clad stockpot.

Do share in the comments and give Ashley your opinions/recommendations.

I wanted a Le Creuset for years but couldn't afford one. A friend of mine bought me the Kirkland version from Costco for Christmas several years ago. I think it was about $40. It is a nice cheery color of red and honestly it's fine for my purposes. I don't use it a whole lot because its very heavy and because I am single so I am rarely making giant pots of food. But on the occasions I have used it, it seems to fit the bill. Plus, I still can't afford Le Creuset!

I love my Le Creuset enameled Dutch oven, found it at Home Goods for $40 years ago. I drove home without buying it because I did not want to pay that much for a pan, after I seen how much they cost & had great reviews I drove half hour the next day to pick it up.

I also have a larger Food Network enameled dutch oven when Kohl's had them so cheap many years ago. I don't use it a lot because it is big, heavy and there are only 2 of us now that kids have moved out. It is great for making bread in. And a Rachel Ray enameled small fry pan, perfect size for 1 grilled cheese, it has very low sides and is oval shaped. Those are both over 10 years old and have help up well.

I have a cheaper brand enameled cast iron, I absolutely love it. I only had problems with stuff stuck on the bottom once when I forgot to turn spaghetti sauce down. I soaked for about 15 minutes and it all came off. As for whisking, OXO makes a great coated wisk that doesn't scratch.

The Tratomina is at Sams Club and I think less than $50 ($30?). Love it for browning and slow cooking. I also have a stainless one for pasta and such.

I have an ancient tiny frypan that is genuine le Creuset. My children love it. I have to fight to keep it in the house. Chef son, anyone?

Other than there are fakes. I bought one in Kmart that did not last long. The rest have come from Aldi over the years and I have never had problems except for a few chips when I have dropped them. They are very heavy when filled,