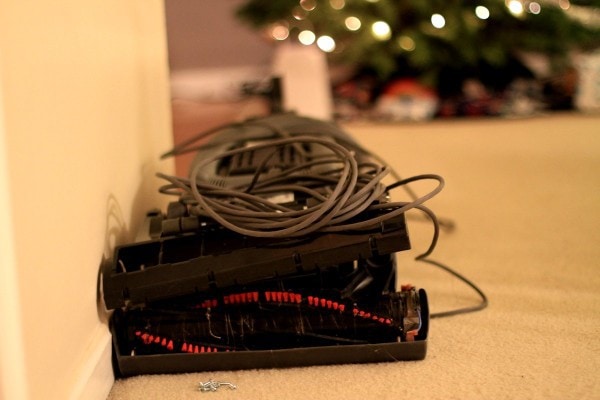 In a fit of helpfulness, one of my girls decided to vacuum her room.

Which was great, except that she’s never really vacuumed before and didn’t realize that you need to watch out for things like, um, curtains. She has a floor-length sheer curtain in her room, and apparently she got it stuck in the vacuum. And the vacuum sucked the curtain up until it got stuck.

The good news is that the curtain is fine.

The bad news is that the motor of the vacuum appears to be burnt up.

In case you were wondering, if you’re the sort of person who wants all of your things to stay nice, you really ought not to have children.

It doesn’t appear to be feasible or cost-effective to repair this vacuum, so I’m in the market for a new one. I poked around on Consumer Reports last night and they’re recommending the Hoover WindTunnel Anniversary Upright Vacuum, which is $179 after the rebate right now.

This vacuum actually beat out some vacuums that were significantly more expensive (Like the Kirby. Holy moly, that thing is expensive!) And Consumer’s said that Dyson vacuums aren’t really all that great, which surprised me.

On the other hand, they really liked the German made Miele S7210 Twist Upright Vacuum Cleaner

, which comes with a 7 year casing and motor warranty and a two year replacement warranty. Unfortunately, it costs $400, which is more than double the price of the Hoover.

I suppose if it lasted twice as long as the Hoover, the extra $200 would be worth it, but gosh, how is a person supposed to know?

I read reviews on Consumer Reports and on Amazon, and it does seem like more people like the Miele than the Hoover, so I’m feeling a bit inclined to think spending the extra money would be wise.

Plus, given that I’m trying to lean more towards buying quality items that last, I’m loathe to buy another semi-disposable vacuum, which is what you seem to get in the $100-$200 price range.

Then again, if my kids are going to be using this vacuum, maybe I shouldn’t spend a bunch on it. But on the flip-side, maybe a better-built vacuum would be better able to withstand kid abuse

(Though all four of them are certainly going to be talked to about scanning the floor for objects that should not be vacuumed.)

So, help me out. Have you owned either of these two vacuums? Or do you have another one that you love and that has lasted for more than a few years?

Neither a Hoover nor a Miele ... I have a SEBO for years and years - I'm sure it's been over ten by now and has yet to visit the repair shop (maybe I just got lucky - it wasn't a "Monday" model). I'm with you on the quality thing though so if I only had the choice of the Hoover or Miele, my choice would be the latter.

I run an Aerus franchise in Grande Prairie, Alberta Canada. Many folks who think their vacuums are picking up well because they can "see" the dirt in the bagless bin are surprised when we visit their homes and do carpet testing. It's the only reliable way to really know if the dirt is being removed well. I have yet to get good results with any of the bagless vacuums.

Try this for yourself to see what I mean: take your vacuum and do not plug it in. Run it across your carpet as if you were "vacuuming". You will see that it appears to be "cleaning" somewhat, even with no power or suction. Why? Because the carpet power head has bristles that move the dirt around. If you can get "results" like that with no power, imagine how much more impressed you might be by adding a little bit of suction. You see, all vacuums pick up dirt. What is important is what they leave behind. Carpet testing is the only way to find that information. If there is a lot of dirt during the testing you then have to determine why it is there. Don't assume it's a bad vacuum, don't assume it always has to be like that. There can be many reasons...

I appreciate Matt's comments about our Aerus vacuums. Thank you, Matt. And he is also right about amperage, etc. What is important in how well a vacuum will perform is the whole machine's design. You can have all the suction in the world, but if you don't have a system that can use that suction (through poor design), your results will always be sub-par. I do my best to educate people about what to look for in a vacuum purchase, whether they buy ours or not.

I have a hard time convincing some folks to buy a new vacuum when their Electrolux (now Aerus) is 40 years old! You pay more for quality, but in the long run, you pay less if you do it right the first time. If you want information I suggest you visit your local Aerus franchise. We are dedicated to helping folks...

I've owned a Kirby for 28 years and finally it needs a $200 motor repair. Quality is worth paying for! I paid $700 back then and now Kirby offered me $700 trade-in toward a new Kirby (I still can't afford it - prices have gone way up in 28 years)!

I realize this is more than a year old, but I'm only seeing this just now. With vacuum cleaners (as with most things in life), you get what you pay for. Over the past 20 years we've become quite spoiled with cheap imports -- in particular the bagless plasti-vac screaming nightmares that have become all the rage. I admit, I bought into the hype years ago, when I got rid of my mother's trusty Hoover Convertible for one of those newfangled Dysons. The Hoover lasted nearly 30 years. The Dyson lasted four. (And a caveat: it turns out the old Hoover just needed a tune-up, and a genuine Hoover belt and bag -- rather than the cheap grocery store knock-offs I'd been using; the guy who picked up the Hoover for just $20 at my garage sale is still enjoying it!)

What I learned from this experience: you get what you pay for. Mom got that Hoover back in the late '60s for $70. Adjusted for inflation, that "average" upright that just about every American household owned TODAY would cost $475 -- putting you even beyond the Dyson, and into Miele territory.

I also learned that these bagless screaming nightmares are dusty as hell -- despite their hyped "hepa" filtration. I had to wipe the Dyson off every time I used it. Never had I heard of having to "wipe down" a vacuum cleaner! And no matter how careful I was in emptying the dust chamber, I always ended up with a *poof* of a dust cloud in the kitchen. Never had that problem emptying the Hoover bags.

I also learned that a 20-amp vacuum isn't necssarily any better at cleaning -- much less more "powerful" -- than my old 4.0 amp Hoover Convertible. Seems that all those extra 16 amps were good for was the drastically increased noise level (and living in a Manhattan apartment building, particularly problematic, as I was limited to using the vacuum strictly during daylight hours).

So what did I replace my Dyson with? Unfortunately, the days of the Hoover Convertible are gone, so I went with the next best thing: a grown-up vacuum this time ... the descendant of the "old" Electrolux (not to be confused with the Chinese crap today that carries the "Electrolux" name), the Aerus Lux Guardian. I just upgraded to the Guardian Platinum, and couldn't be happier (I gave away my older Aerus to a friend). These suckers are built like tanks, suck like nobody's business, have hospital-grade filtration, and last forever. But quality does come at a price: $1700. What I get in exchange, however, is an eminently versatile vacuum with 8 speeds, virtually ZERO dust exhaust (indeed, running it actually cleans the air in the room), and whisper-quiet operation that enables me to use it even in the middle of the night without waking the neighbors.

My advice would be to use the same type of rationality that made you purchase your Kitchen Aid Mixer. After owning probably more than ten vacuums in the last 28 years, including the Dyson Animal which really was an animal as it seemed to gravitate and chew up the door facings and baseboards, this time I went with the Miele continuum. I have never been more pleased with a vacuum