When I lived at my last house, I did try to join a Buy Nothing group but sadly, I was a little too far outside the lines of any current groups. 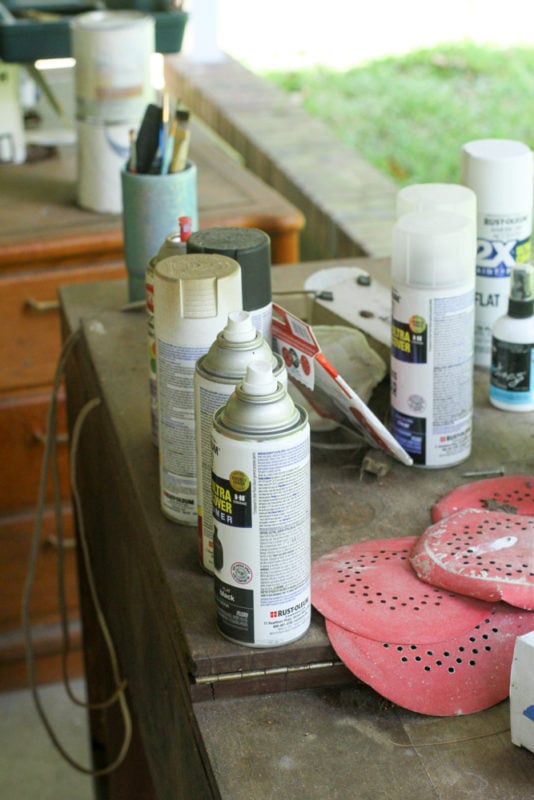 In case you haven’t heard of them: Buy Nothing groups are hyper-local Facebook groups where people give things away (and also sometimes ask for stuff).

The idea is to keep things out of the trash but also to keep things local. That way people aren’t having to ship stuff or drive a long way to pick up freebies.

When I lived with my parents, I joined their group because my mom had some stuff to give away and I figured I could help her get rid of it. Along the way, I picked up an end table: 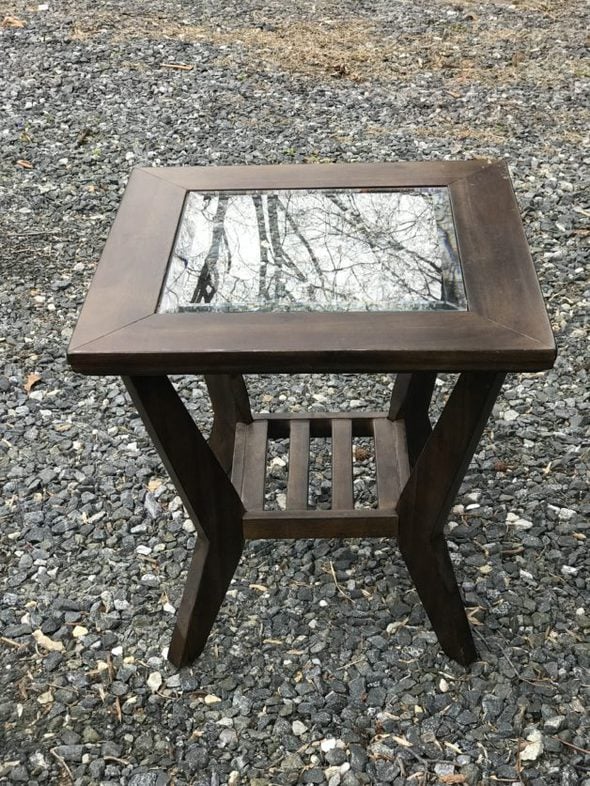 And a bookshelf, which I rehabbed (lots of before, during, and after photos here) 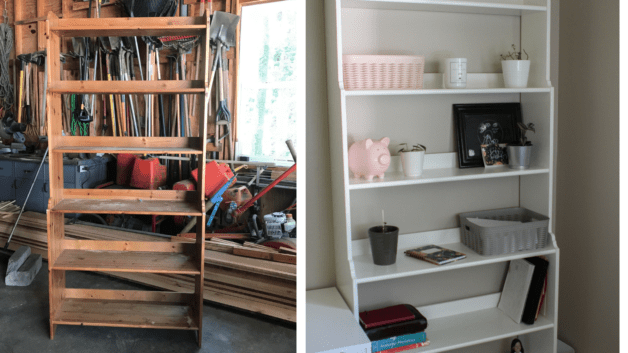 Things I’ve given away

I haven’t had a lot to give away, since I’m basically starting a household all over again. But I have been able to give a few things!

The vacuum I ordered from eBay came in a big shipping box full of packing peanuts. Packing peanuts are messy but useful, so I offered them up, and someone came to get them the same day. 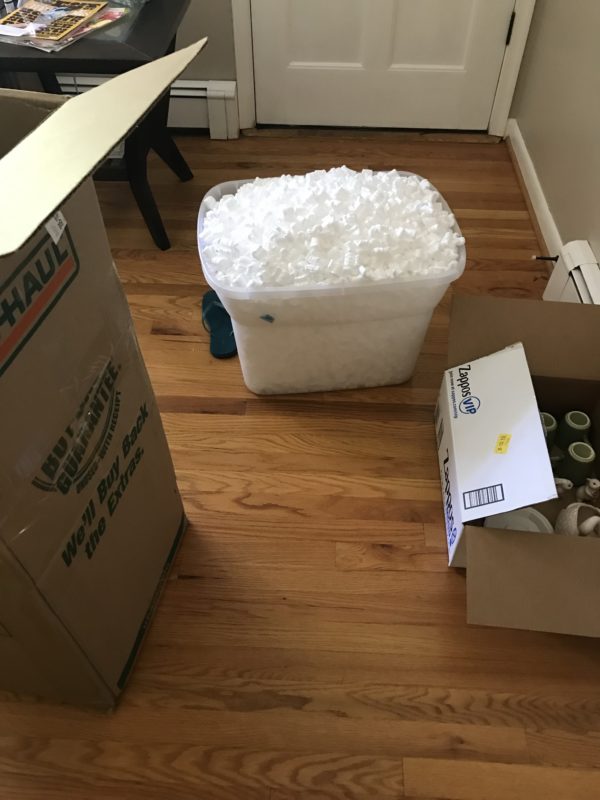 I also gave away a box of staples (from the treasure house!), and several metal/plastic dishes (someone wanted them for her daughter’s backyard mud pie kitchen). 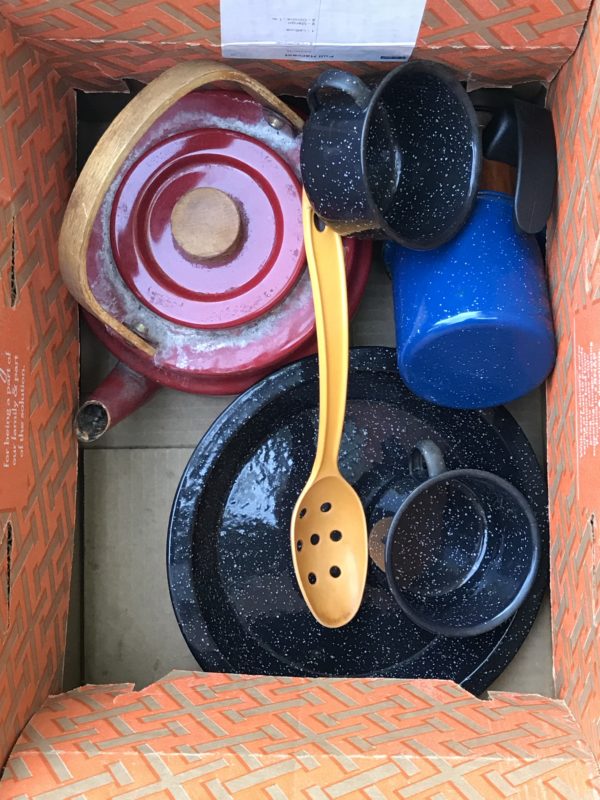 And I gave away some crochet hooks from the treasure house. 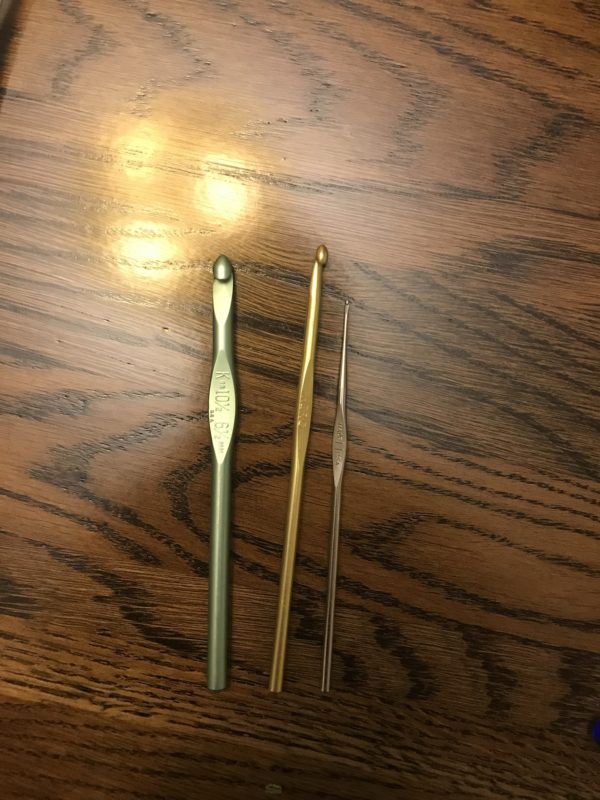 We didn’t have a butter dish, so when someone offered one up, I was like, “OOOH YES.” 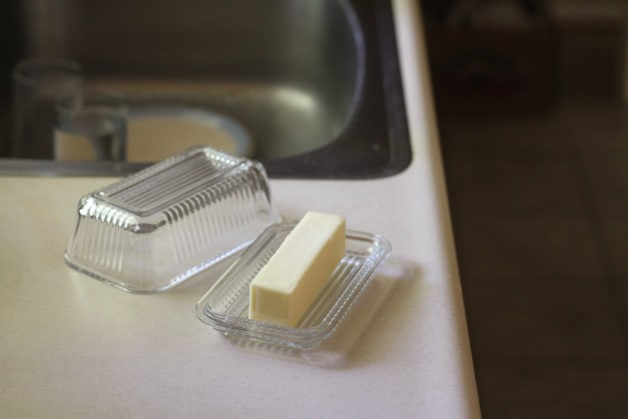 I needed some small trash cans (I didn’t have one in the laundry room, for example) and I’d stopped in at Goodwill to see if they had any. Nope!

But a few days later, several popped up on the Buy Nothing group, so now I’m all set for trash cans. 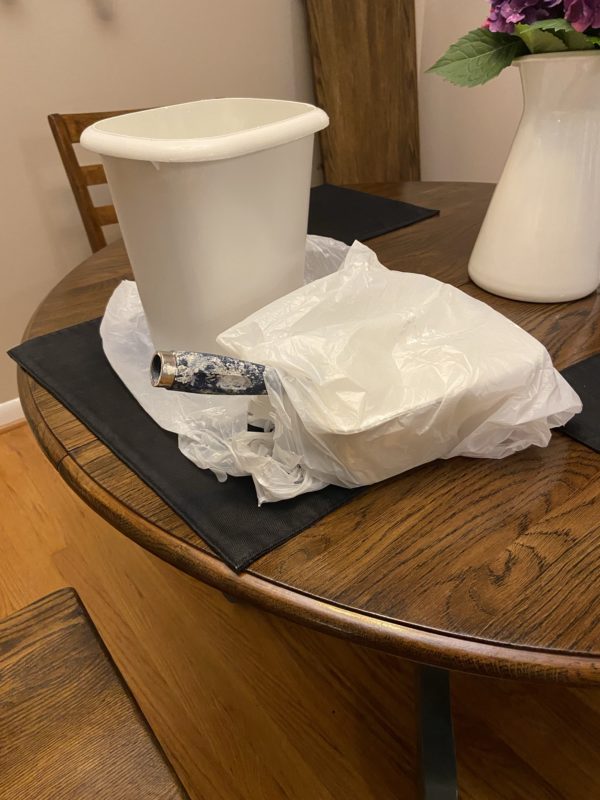 I did paint the one for my bedroom. 😉

Buying trash cans is very unrewarding, so I was delighted to get some for free.

And for somewhere like the laundry room, I really could not care less what the trash can looks like.

Someone was giving away three dirty/dilapidated pots, so I picked them up. 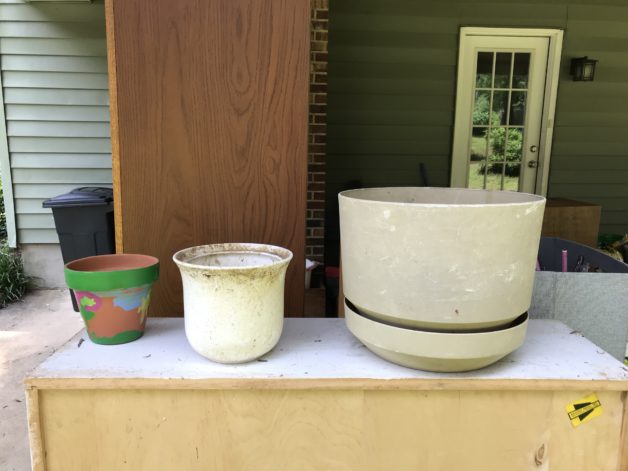 The same day, another person was giving away a huge collection of spray paint, so I stopped to pick that up, with the idea that I could use it on the pots. 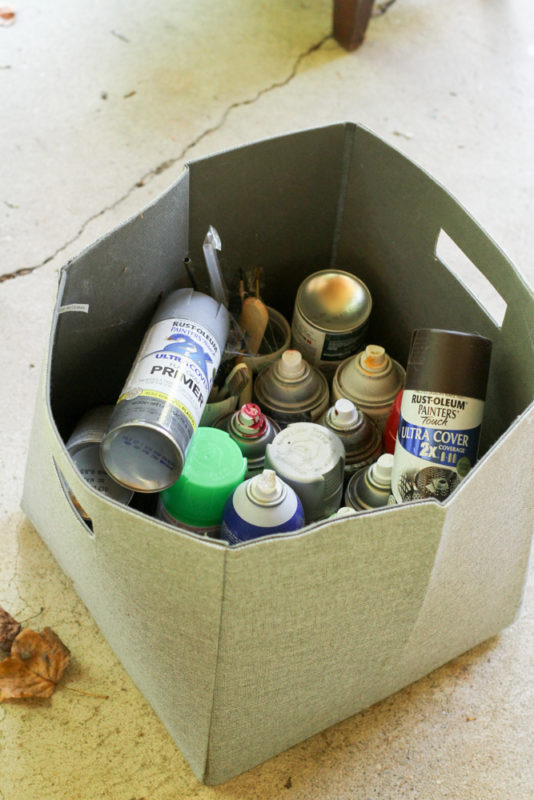 The middle pot in the above photo is a Pfaltzgraff ceramic pot, so I did not want to paint it.

It was very dirty and almost looked like it had been sprayed with tiny drops of cement.

I washed it and then painstakingly scraped off all the little drops, and I am happy to say it looks new now! 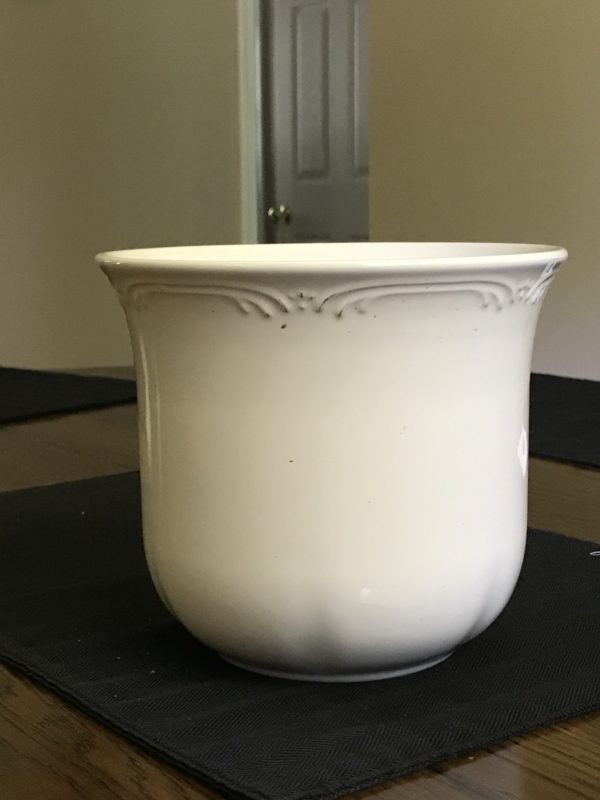 I planted some cuttings from my long-lived Aldi succulent, and they are thriving. 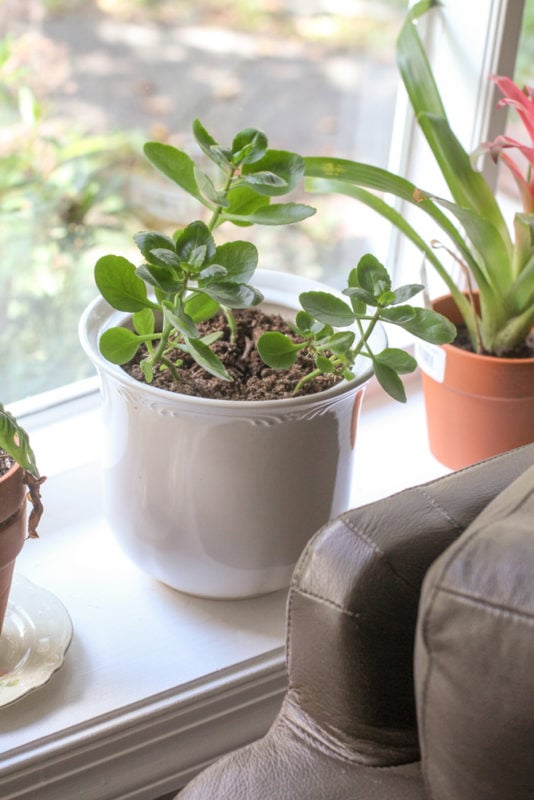 I spray-painted the terracotta pot on the left with purple spray paint.

And for the big pot on the right, I tried using some green-ish spray paint, but then I realized it was gonna clash with my house. 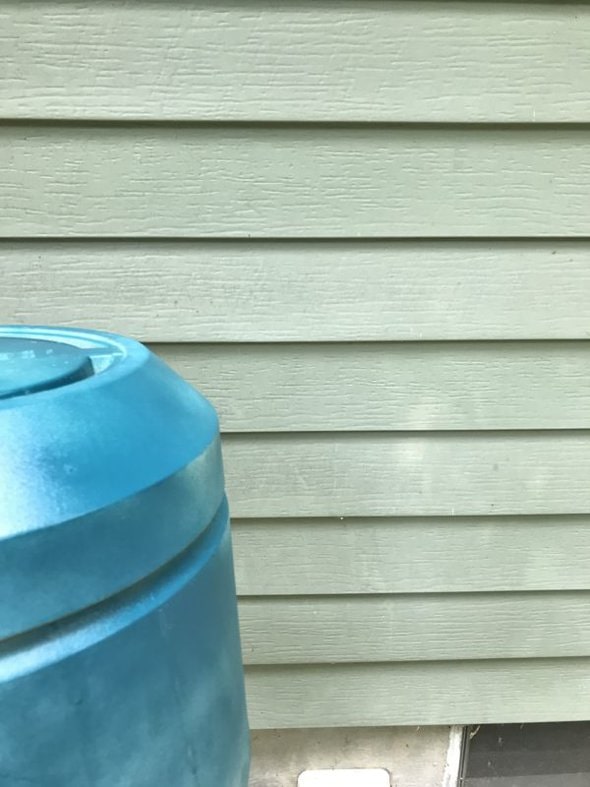 So I swapped that out for a cranberry color. 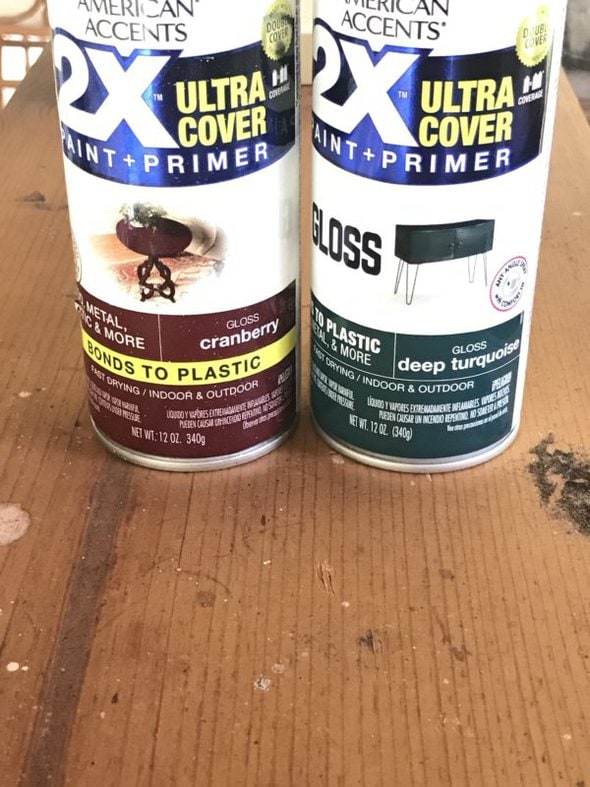 And I filled the pot with some sedum from my old house. 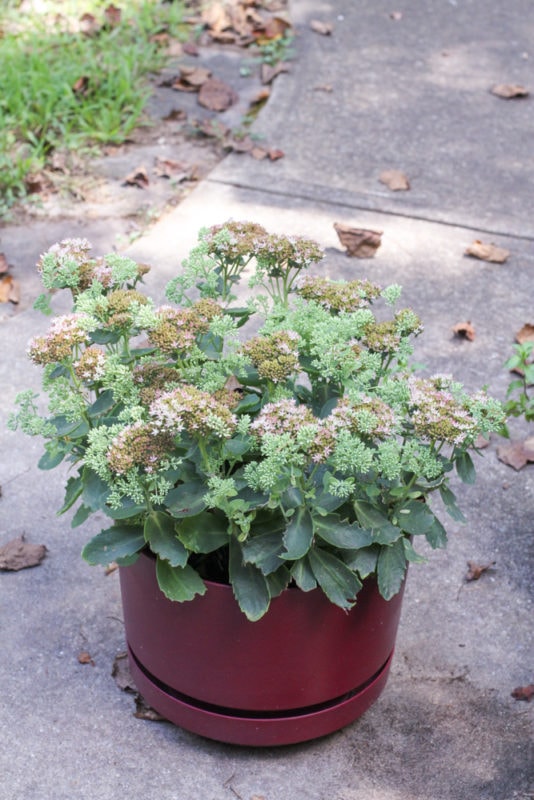 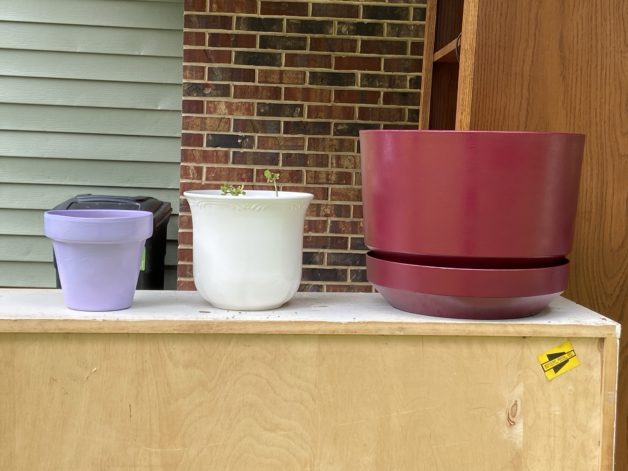 The bookshelf these pots are sitting on was also a Buy Nothing group find, but I want to show you that in a separate post.

Back to the paint: I used some to fix up my mailbox flag too, as I shared before. 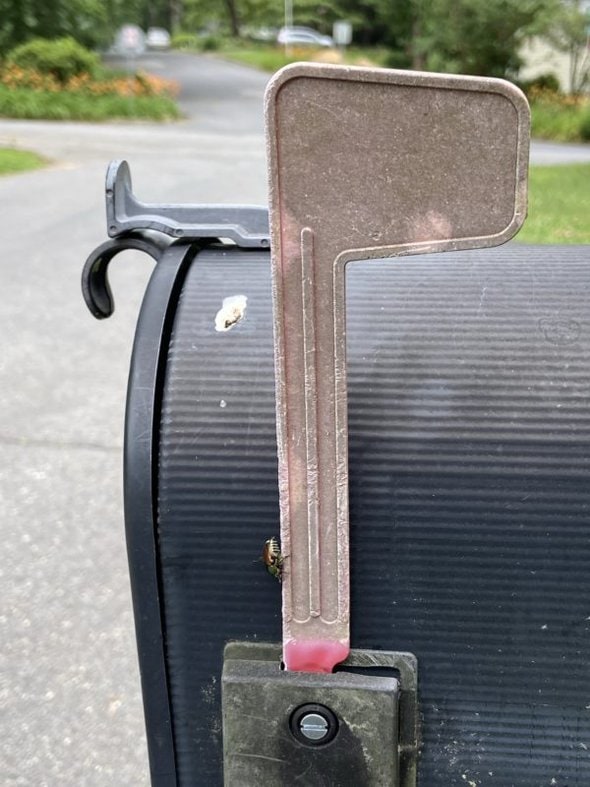 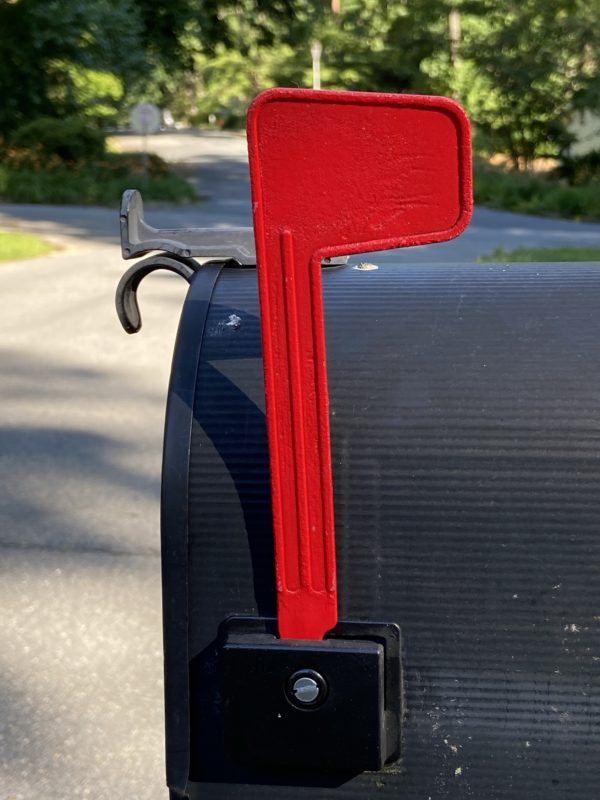 These obviously fall into the nice-but-not-necessary category…but someone in the group was giving away some jewelry, and since I was already in the area for another pickup, I stopped by. I gave some of the earrings to Zoe, but I kept these gold ones for myself. 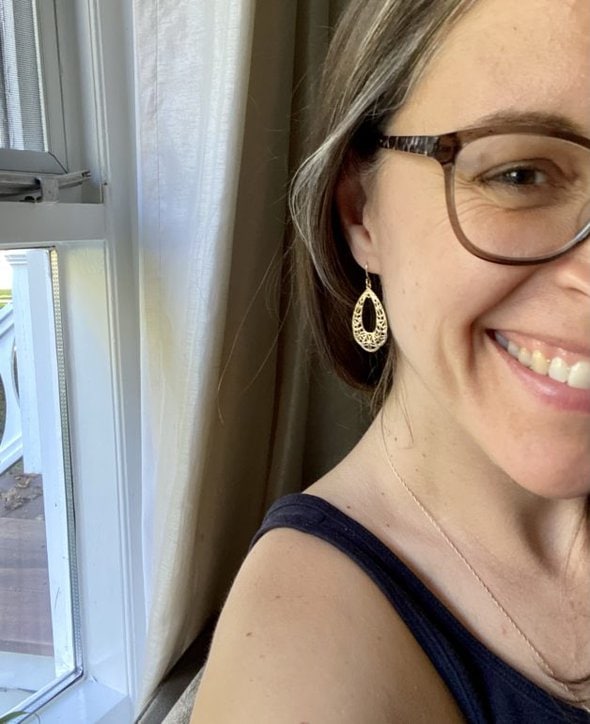 While I was trying to take a picture of my earrings (it’s harder than it might seem!), the cat came to join me. 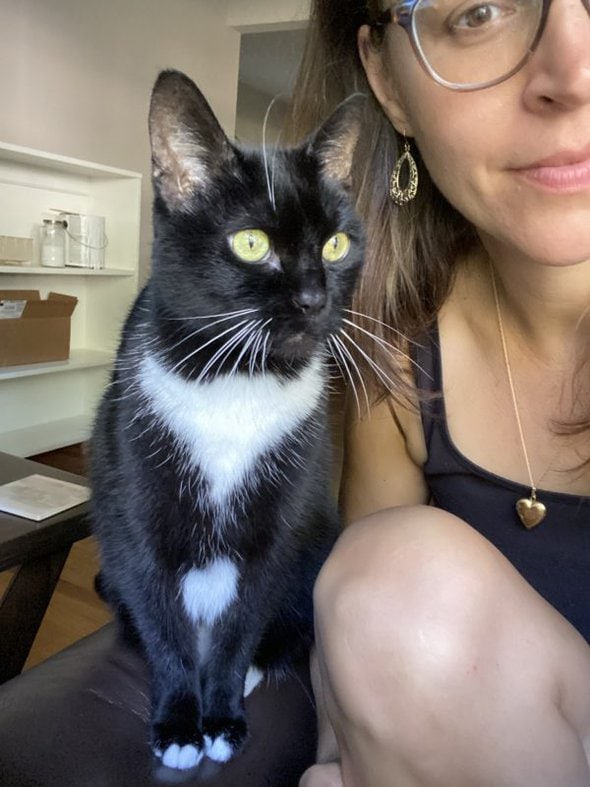 We were scraping by with a rather motley assortment of flatware from the abandoned house, but we were pretty short on some things, like knives.

So, I was seriously thrilled when someone offered a whole set of silverware. Yay! 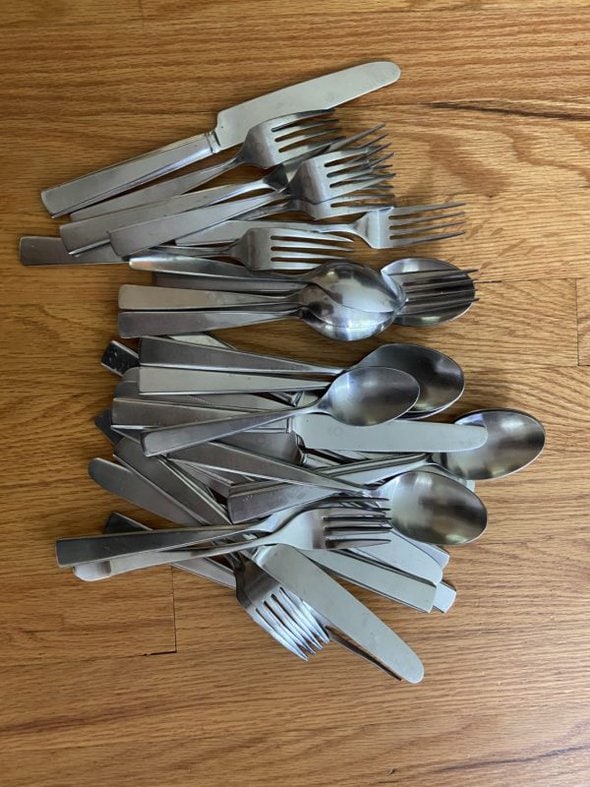 Now we don’t have to wash dishes quite as often.

In conclusion: I really love my Buy Nothing group. A solid 10/10 from me!

If you want to find a Buy Nothing group near you, there’s a directory here.

Or you can always just google the name of your town plus “Buy Nothing Group” and see what comes up.

Are you part of a Buy Nothing group? If so, tell us about it!

Love this! My local buy nothing group has been fantastic for giving things a new home that we no longer need. We acquired WAAAAYYYYYY too much stuff over the years and I'm desperately trying to make some room in our home. Giving things to neighbours who need them is such an awesome win/win.

I was in a BN group until recently. It is a wonderful concept that I wholeheartedly support. I gifted a lot and received some items. All good. However recently people started passing around live animals like they are stuff. I appreciate that on the whole the people in these group are genuine and good hearted. I have met some and am now friendly with them. Nevertheless it is a strangers group…most people you never actually meet, let alone get to know (and how well do we ever know what goes on behind closed doors?) Our group actually has a person who has been charged with animal cruelty and twice had animals removed.

When I drew this to the attention of admin I was told there was a ‘rule’ that says it is ok, as we will check up on each other. Sadly the real world isn’t like this. No one is going to follow up to make sure Fluffy has been spayed/neutered and all shots completed etc We all know animals are acquired by those that mean harm…dog baiting etc I spoke to local police, animal control, vets, registered animal rescuer, the ASPSA, my assemblyman and mayor. All were horrified and appalled. None supported this.

People don’t understand they maybe putting themselves and their home at risk too. How you going to tell a stranger that actually they are not a good fit for the free cat when they are standing in your living room? They have promised their kid a kitty and now they know where you live. Equally, would you ask a stranger in the group to babysit your children?

It isn’t actually a rule, but a guideline. No group has to follow it, especially if there are objections. I made my objections and observations, I am a retired police officer. I have seen it all. The group admin sadly did not take a step back to think, but took the position that it is a hard rule…and basically I was told to keep my thoughts to myself. I left the group…I morally can’t be part of passing live animals around like old books and purses.

I truly believe this is a great group/concept…for stuff, not animals. They don’t have a voice. I appreciate there are other Facebook/Craigslist etc etc place where this goes on….but the BN groups can at least take a stand and say NO.

So, please, all you lovely well meaning people… pass stuff, not lives.

I'm part of a Buy Nothing group in southcentral Pennsylvania, and I adore it. I've given and received so much. I've made new friends. Our group is about so much more than this stuff! ❤️

Hi. I’m Katylin. We want to welcome all of our new members and let everyone know that we've moved our group and all the Give-Ask-Gratitude action to the free & independent BuyNothing app!

If you're on an iPhone, here's the link for the BuyNothing app in the App Store: https://apps.apple.com/us/app/buynothing/id1557679959 And if you're on Android, here's the link for you to download the BuyNothing app in Google Play: https://play.google.com/store/apps/details?id=com.sharething.app We've moved to the app so you can connect both hyperlocally with people in your immediate neighborhood (0.5 miles) and also with neighbors who are 1 mile, 3 miles, 6 miles and even 20 miles away, if needed. You can travel with the app wherever you go, to share more readily at work or on vacation. There is no waiting you can instantly join and start posting today! We're looking forward to seeing you there!

A Warm Buy Nothing Welcome to everyone   !

Oh, I love my local Buy Nothing group. A friend of mine who has helped me in the past with clearing out the loads of things that accumulate here used to ask me "How many Cubic Feet do you think you got rid of in THAT load?". I think of her every time I gift something. Recently I was able to gift a dad my daughter's very nice twin bed mattress, box spring and frame - she has moved out and moved to a larger bed, and I no longer need to store hers! HER box spring came from buy nothing and mattress came from a friend who also gifted me her old family dining room table and chairs, which my Son now proudly uses in his new apartment. I have received frying pans, plants, canning jar lids, vases (which I picked up and secret-santa dropped off at a local lady's flower stand, where she gives away vases with her flowers) and books (picked up to mostly donate to our local tiny roadside library), and more. Just contacted a lady who was getting a double bed from a Buy Nothing gifter, to offer her two sets of double bed sheets - and when SHE came by we hit it off, she might end up doing some housecleaning for me! Go local groups! Someone was looking for a blow up mattress for company, and I was able to lend her some blow up cots that a friend had given me. She was delighted and returned them a week later with thanks. (I was willing to share like that to a stranger as the cots owed me nothing, however I was pleased to get them back..). I have given away a set of dining room chairs after receiving a set of chairs that I much preferred. Every once in a while I go on a posting flurry - when we were cleaning out the barn I posted a bunch of random stuff and managed to get rid of almost all of it within a day, some to repeat picker-uppers who I have come to know. I don't think they are reselling, much of those gifts were renovation specials. Every time you post about Buy Nothing I am reminded and go and post and look at mine. One Cubic Foot at a time!