If you follow me on social media, particularly on Instagram, you’ve seen that I have been busy cleaning up bins of dishes that my sister-in-law and I rescued from an abandoned house. 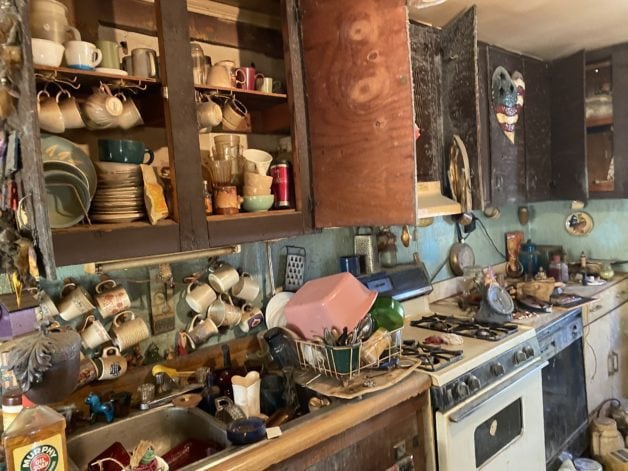 Multiple readers have wondered, “What is the story behind this house?”

So, since I don’t have any Meet a Reader posts in the queue (feel free to volunteer!), I figure I’d use today’s post to answer the most common questions I get about the house.

Why did your brother buy this house? 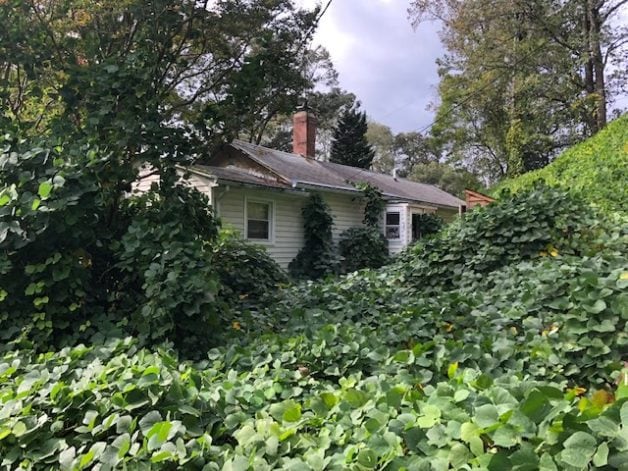 You couldn’t even really get to the house at first, the overgrowth was so bad.

Well. He is such a whiz at home-buying; he owns several houses that he rents out, and he is always keeping an eye on the housing market around here.

So, when this very cheap house popped up only two streets over from his current house, he snapped it up. He’s going to gut it, remodel it, and then rent it out. 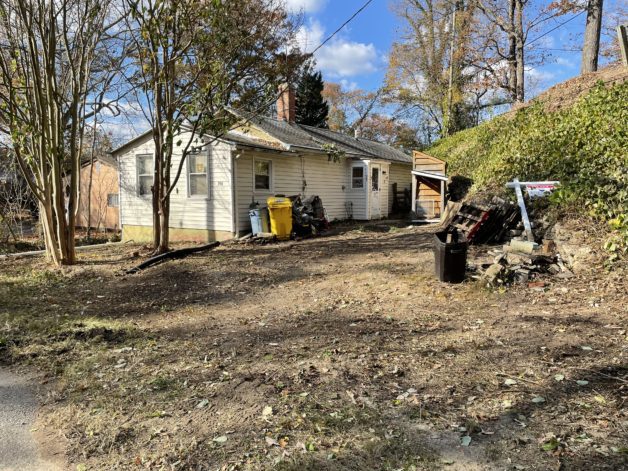 Since it’s so close to his own house, it’s going to be very easy to keep an eye on it; it’s a perfect location!

Why was the house abandoned?

We haven’t pieced together the whole story, but here’s what we think happened.

At one time, a married couple seems to have lived there, but about 15 years ago, there was a divorce (I came across the papers when I was cleaning out drawers over there.)

After that, it appears that the woman in the marriage lived in the house on her own, and several years ago, she died. 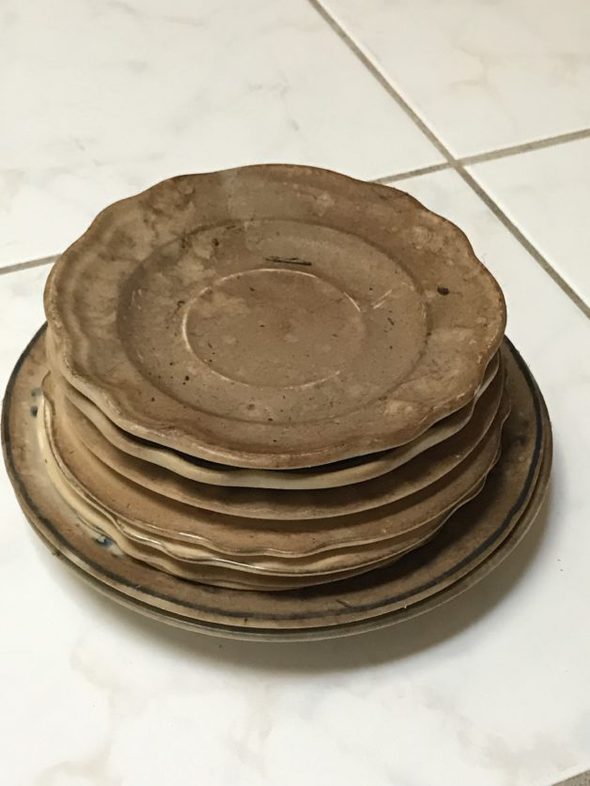 For reasons unknown to us, no one did anything significant with the house after this woman’s death.

We can tell she had children, based on photos on the walls in the house, but maybe they live far away and couldn’t come take care of it. 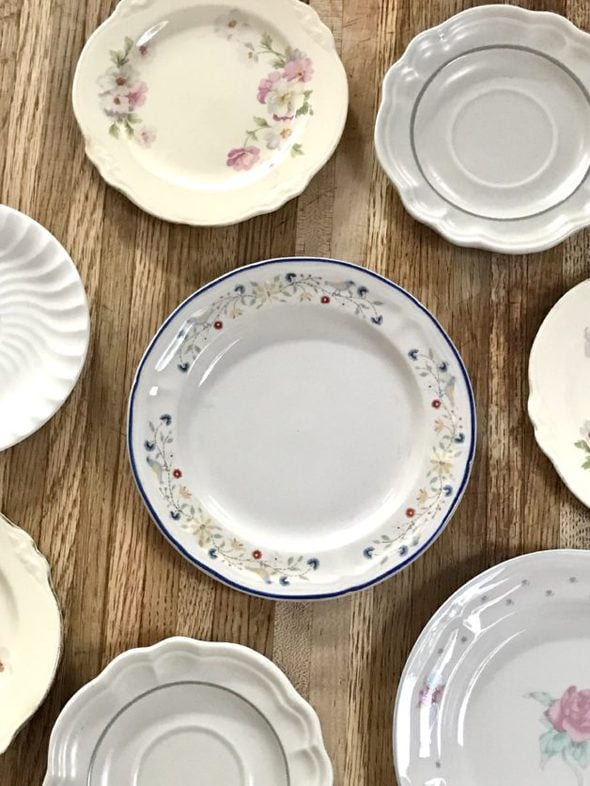 These are the dishes from the dirty stack pictured above.

It does look like someone tried to start cleaning it out the house, but they quit pretty shortly after starting; we can see several areas where things are partially sorted into boxes.

Why did the house finally go up for sale?

As I understand it, some kind of tax bill was finally coming due for the property, so then the family just put it up for sale as-is; they probably figured that was a better option than paying taxes for a house no one is living in.

Why is everything in the house so dirty?

This is kind of a mystery to me! I know that dust settles on things as a house sits, but so many things in this house are more than just dusty. 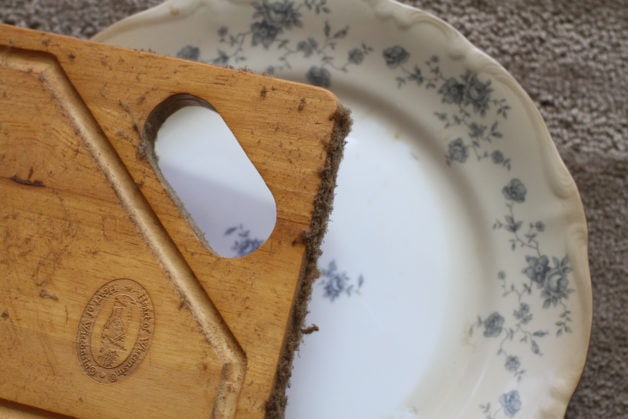 My nose tells me that this was a home that was smoked-in, so I think that is part of the issue.

The smoke residue is probably what left the sticky brown residue on the dishes, and then the dust really stuck to that residue. 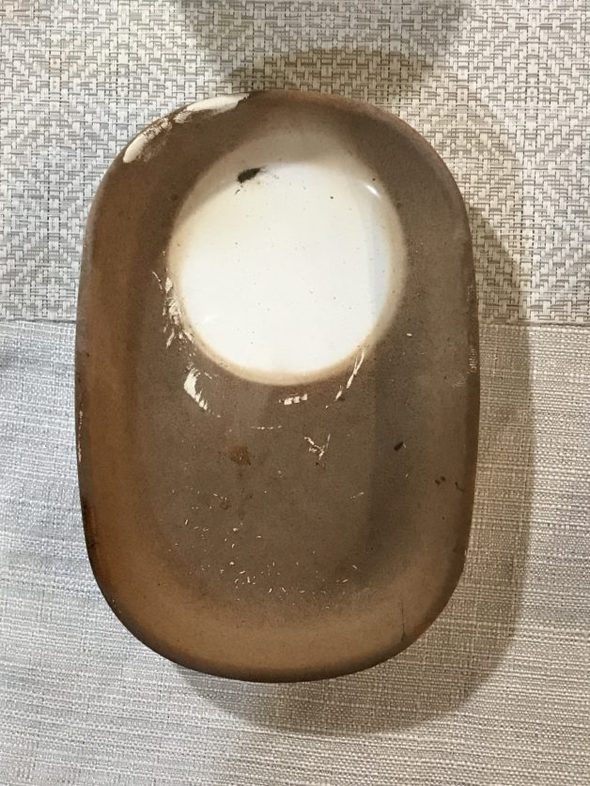 This plate had a bowl on one side that protected it from the dirt!

Why is there so much stuff in the house?

Based on some of the things we’ve found in the house, it seems like the homeowner may have struggled with some type of mental illness.

I know people who are facing mental health challenges often find themselves unable to maintain order in their homes, so I am wondering if that’s why this house is just stuffed to the gills with…stuff.

As we’ve cleaned out the house, my sister-in-law and I have felt a lot of compassion for this lady; it seems like she led a rather lonely life, in a house that could have used a LOT of repairs. 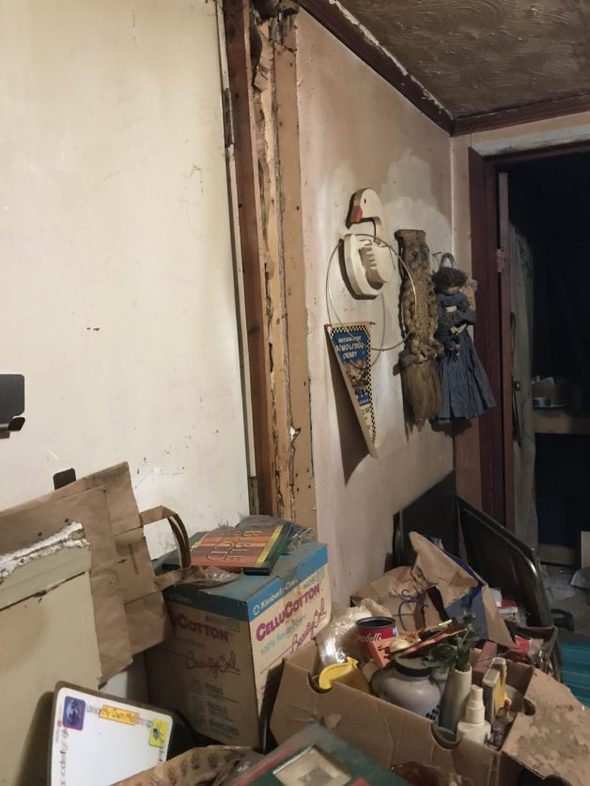 I like to think that she would be happy if she knew we were taking good care of the things she left behind. 🙂

How are you cleaning all of this stuff? 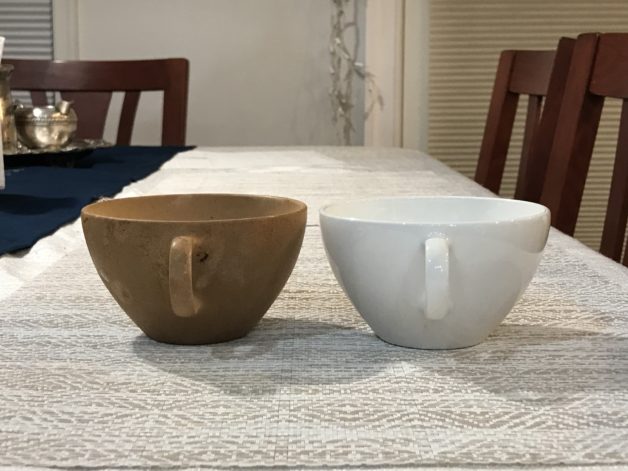 I have thrown some of the sturdier dishes into the dishwasher, but some of it really needs hand-washing, like the china with metallic accents.

And some of the kitchenware is old enough to predate automatic dishwashers, so I hand wash those things.

Is any of this stuff valuable?

Not really. There’s definitely nothing that was expensive initially; anything in this house that has value is simply valuable because of its age. 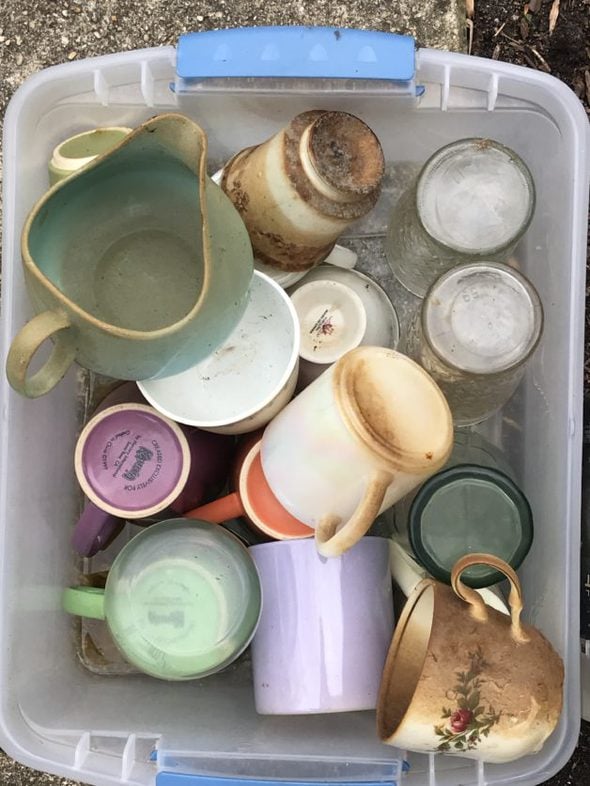 As we work through the bins of these dishes, I keep wondering how she came to own all of these.

There’s SUCH a random assortment of things; various pieces of mismatched china, some usual household dishes like Corelle Ware, some pieces that are definitely from a restaurant (like super thick plates and mugs), and more. 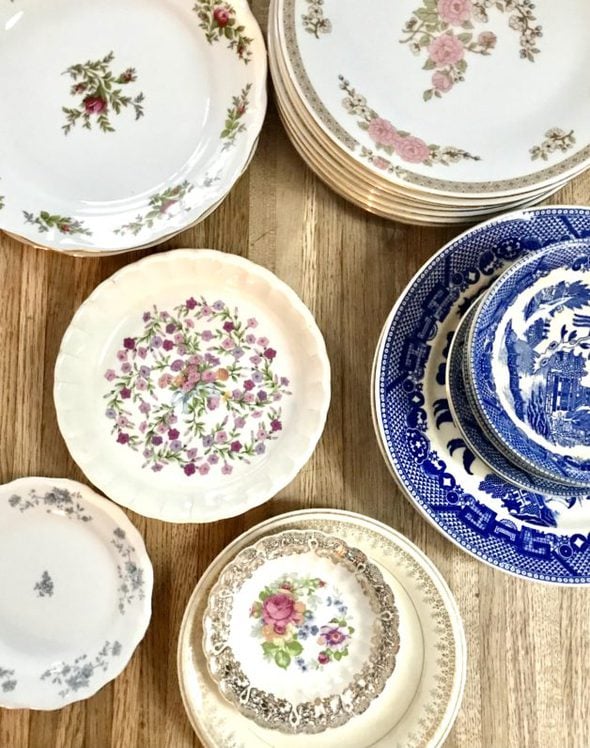 I am sure there are interesting stories that go with these dishes, but alas, they’ll have to remain a mystery.

What are you going to do with all these dishes?

We have found some really interesting and beautiful things in our treasure hunts, and we are keeping some of those. As you might imagine, Sonia’s vintage-loving self has squirreled away a number of things for her future household. 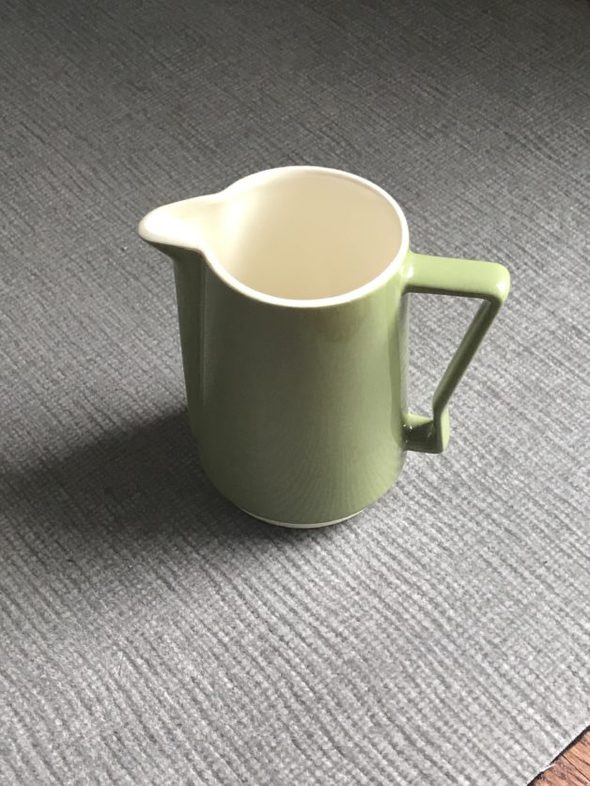 And I gave a whole toolbox full of tools to Lisey; she was delighted!

We may sell some of the things online, and whatever we don’t want to sell or keep, we will donate.

My sister-in-law and I just hate to see useful things go to waste, so as long as these dishes make it into the hands of someone who will love and appreciate them, we are happy. 🙂

Any other questions? Let me know!

My brother works on cleaning out houses and he says there are a lot of mentally ill people out there but some are just plain poor and insecure about their future which causes them to hoard because "they might need it and not have the money to acquire it in the future."

Are you worried about getting sick from either cleaning out the house or cleaning/ using the plates and cups etc? I know I would be.

If the house had moisture issues, I might be concerned about breathing in there. But as it is, we wear masks while we work in the house; it just smells too bad and there's too much dust to go without a mask.

Once things are cleaned, I definitely am not worried. Soap and hot water (and the dishwasher in some cases) are good at removing junk from non-porous surfaces. :)

I suspect she might have been a hoarder who might have just kept aquiring stuff at thrift stores/ garage sales. I’m happy you are helping to rescue some items!

I think it's fantastic that you and your sister-in-law were able to save so many items from this home. There are so many beautiful dishes under all that grime. I'm sure you will be able to find a lot of online buyers for these items. I know there's a website out there for buying and selling dishes that belong in sets. I'm not sure what the website is called, however.

I'm late to the game today. More on that later this week.

I also noticed that the lady seemed to have a fondness for pretty dishes. I do too, so that spoke to me. One of my guesses was that she might have been a heavy smoker, as that brown color looks like the aftermath of nicotine stains and dirt, and I see I'm not the only one who thought that.

I have a weakness for pretty things, and I am trying to keep myself from buying more at thrift stores and yard sales. I have had one good "clean out" of my house, but there is always, always more to do. My parents were packrats (although their house was always neat and tidy. They could have been Tetris kings, they were so good at storing things away in every cupboard, closet and drawer) and after inventorying the parts of their house that survived a fire, I decided I would never be a packrat myself. SO MUCH STUFF. We had to count everything to be able to get replacement value from the insurance, and I'll always remember this: my husband counted the dress socks in one of my dad's dresser drawers and came up with ninety pairs. We brought DH a second drawer of socks to count and he told me to write down 180 pairs and be done with it - he wasn't counting anymore socks. Who knows how old some of those socks were?