This post is a bit off-topic and a little more serious than the usual Frugal Girl fare, but this stuff has been circulating around in my brain lately and I feel the need to put it all down into a post. 😉 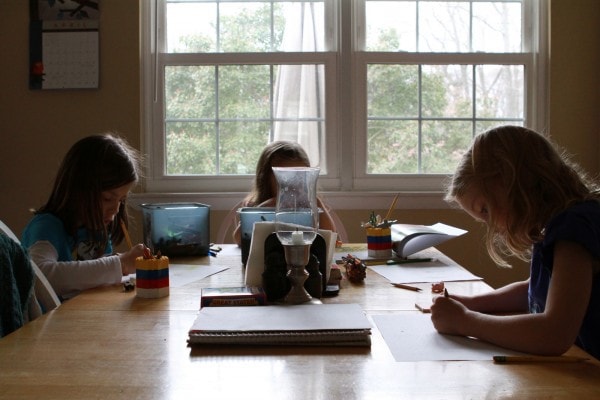 When a blog (which is public and out on the internet for anyone and everyone to read and comment on) is written by a Christian author, something sort of weird happens.

Fellow Christians who read the blog sometimes start to feel like the blog is like a kitchen-table gathering between church friends instead of a chat with the whole world. And when that happens, sometimes the Christians are not as mindful of their words as they ought to be.

Of course, this phenomenon is not limited to Christian blogs. I’ve seem the same thing happen on blogs written by feminists or atheists or fill-in-the-blank-s.

However, a blog like mine is different. I am a Christian, my faith informs every aspect of my life, and I do think that Jesus is THE way, the truth and the life, and that He is the only way to the Father. I’m not at all wishy-washy about my faith, and I’m not shy about it. But my blog is not specifically about Christianity, and so my audience is not specifically Christian.

After all, you don’t have to be a Christian to be interested in saving money.

For the record, I feel very blessed to have such a diverse audience…I don’t think true Christianity dictates that I live in a bubble, surrounded only by believers. Quite the opposite, in fact, and I am delighted to have readers from all walks of life and of varying beliefs!

Sometimes, dear fellow Christians, you leave comments that are not as polite or humble or gracious as I’d prefer (and ultimately, as I believe Jesus would prefer), and in doing so, you alienate people who have different beliefs than you do.

I want to keep my blog a place where Christians and non-Christians alike can hang out, and to that end, here are a few thoughts/guidelines about commenting here for my fellow brothers and sisters in Christ.

In the future, if a comment doesn’t follow these principles, I may need to delete or edit it in order to maintain a commenting space that is friendly to all of my readers.

Please know that this post was not inspired by any recent brouhahas in the comments (in case you’re thinking, “What could possibly have been so controversial about yesterday’s miscellany post???”), and that it was not inspired by any one commenter in particular (so don’t feel like you have to go over your last 50 comments with a fine-toothed comb to see if you’re the one I’m addressing! ).

And also please know that I’m writing to you guys as someone who has failed miserably at this in the past. God has graciously chipped away at more of my sinful tendencies over the years, and thanks to His grace, I think that I’ve been able to better learn how to relate to people of other faiths and belief. That said, I don’t think that I’ve somehow “arrived”, so to speak. I’m in the trenches along with you guys, fighting against my pride and self-righteousness and endeavoring to live in front of a watching world in a way that brings glory to God.

p.s. I would be remiss if I didn’t add a word of thanks to all of my readers for being some of the lowest-maintenance commenters in all of the blogosphere! 99% of the time, you all are gracious and kind and I am so grateful for that. Mwah!

"It's easy for believers to get distracted by focusing on a multitude of other issues (we love to argue about gay marriage, the role of men and women, parenting issues, and so on), but all that stuff is really beside the main point. I don't think Jesus wanted us to go out into the world and make everyone live moral lives...he wanted us to spread the gospel."

Thank you for sharing this. I felt like you were speaking directly to me. I've been struggling with the "politics" of my faith for quite some time and it's refreshing to know that I'm not alone. It's heartbreaking to hear someone using God or the Bible as an excuse to spread hate.

I know I'm reading this post MUCH later than you posted it, but I wanted to say that I couldn't agree with you more. There are so many times you find believers that alienate and offend non-believers with their attitudes and words. The biggest example that comes to mind is the recent campaign that sympathizes with America's gay youth. It saddens me that these young men and women were teased, harrassed, and suffered from low self-esteem, yet Christians (as a whole) did not step up to the plate. It took the U.S. government (and some big names in Hollywood) to finally reach out to this hurting group of individuals. No matter what we personally believe about another persons lifestyle, values, or actions, as Christians, we are called to LOVE one another, just as Christ loves us. Period. Excellent post!

BTW, we Catholics are Christians. http://www.davidmacd.com/catholic/are_catholics_christian.htm Catholicism is one of the many Christian denominations in the US and around the world. Please be aware that to characterize Catholics as non-Christian appears unChristian. Catholics and Evangelicals are all brothers and sisters in Christ.

I'm a few days late reading this entry, but I wanted to say thank you Kristen. You have a gift of words and this post was obviously prayerfully written. Love your blog!

I read a lot of news and political blogs. For awhile, I would try to engage people when I disagreed with their point of view, always without any name calling and only with presenting facts that put their claims into question. After far too many instances of feeling overwhelmingly frustrated with people's rude and inane responses, I quit reading comments -- on any blog or news site -- for quite a while. It's refreshing to read the comments on this blog, because they're actually constructive and interesting. Of course, there's nothing uber-controversial written here, but it's a nice change of pace.

I am not a Christian. I've mistakenly made generalizations about Christians in the past. As I've become interesting in frugal living and homemaking, I've come across a lot of inspiring people writing blogs (like you, Kristen!) who are also interested in this topic, and are darn good at it, and also happen to be Christian.

There are a lot Christian people who believe things that I adamantly disagree with, and that won't change. However, I've come to realize that it's much more important to embrace our common aspirations than to always focus on our differences. I believe in peace. It took me a while to realize I wasn't being very peaceful towards Christians.

I appreciate these comment guidelines you've written. They're essentially how I wish everyone treated each other in all aspects of life -- God or not.

Here's to more civility in the world.

I just read some more of the comments on this blog, and it's funny to see how many lurkers came out. I've pretty much been a lurker for a long time, too. I've only commented on one other post before this.

You touched a nerve!