Generally speaking, when you’re grocery shopping it’s a good idea to look at the unit price (price per ounce, piece, or pound) of the food you’re buying to determine what is a good deal and what is not. But sometimes, I think you have to look beyond that and take some other factors into consideration.

Consider this lone potato and these two mushrooms, which I bought for making Deep Dish Pizza. 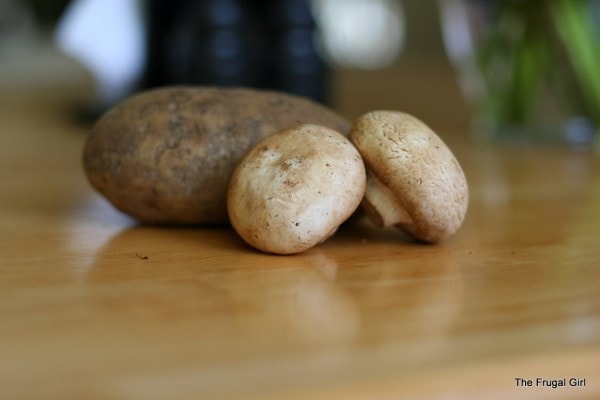 The potato was $.99/lb and the mushrooms were $2.99/lb. This cost per pound is definitely higher than what I’d pay by buying a large bag of potatoes or a larger package of mushrooms, especially if I did so at Aldi.

But, we don’t eat a lot of potatoes, and my husband is the only one in our family that relishes mushrooms. We could debate the merits of these eating habits in our home, of course, but the fact remains that we simply don’t go through a lot of potatoes and mushrooms at this point in time.

So, odds are good that if I bought the big bag of potatoes and the larger container of mushrooms, we’d end up letting some go to waste, which means that some of the money I spent would also go to waste. That, or I’d be scrambling to find ways to use up the potatoes and mushrooms, and I prefer to avoid that as much as possible. I end up doing enough food-waste-related scrambling as it is!

I spent $.74 on my potato and $.45 on my mushrooms, which adds up to $1.19. For me, that was a better option than spending $4 ($3 for potatoes and $1 for mushrooms) on larger quantities of potatoes and mushrooms that we didn’t really need.

This sort of thing doesn’t happen all that often in our family, but I can imagine that for smaller families or for single people this principle holds true much more often, especially when it comes to perishable foods. Yes, a large container of strawberries from Costco costs less per pound than a small container from the grocery story, but the larger container isn’t a good deal if the berries go bad before they get eaten. Even something relatively shelf-stable like a large container of oatmeal might go rancid before a small family or single person can use it up.

So, what do you think? Are there things that you purposely buy in smaller quantities so that you can avoid wasting food (and money!)?

One of the most important changes by the supermarket chains is the selling of things like oranges and apples BY THE POUND. It used to be by the dozen... or each. But, the profit is much better by the pound. Even though, in the case of Navel oranges... the skin probably is 10-15 percent of the weight, and so on. This fact has not eluded the supermarket folks. Have you noticed lately how long the thick green stocks are that are being left on the broccoli? Same thing with the stems on mushrooms... noticeably longer. How about all the packages that have been reduced in size. I had a bottle of energy drink the other day and the contents were 15 ounces. Why? And, it ain't to save us money. Half gallons of ice cream... still look (kinda) like half gallons but are really, 1 quart/1pint (48 ounces instead of 64). The new one is the toilet paper. Now about 1/2 inch less in width. This weight manipulation is not to save us money. I saw a Coca Cola package yesterday... it was 20 12-ounce cans... not 12, not 24... and the price was $5.99. It was the same when they went to 8-packs and were getting $2.50 (which, at the time... was what 12-packs were costing. No savings there! Well, anyway... you get the idea. Call your politicians and raise hell with 'em. If we annoy them enough, maybe they'll fix it to get rid of us.

I'm single, and my roommate and I cook separately. (We don't like each other's cooking, which is unfortunate...I'm just not into authentic Chinese cooking.)

Luckily the grocery store sells single carrots. Unfortunately, they do not sell single celery sticks. I go without celery a lot. Although occasionally we do share a head of lettuce or a pack of lemons or something. Rarely do we cook with the same ingredients.

Or buying small quanities of junk food so you don't eat the entire bag of 48oz jelly beans that you caught on sale...^_^

one of the benefits of a coop is splitting large orders.

I buy small containers of olive oil, mayonaise and peanut butter. With just the hubby and I, we do not go through it quickly enough to keep it from going rancid.