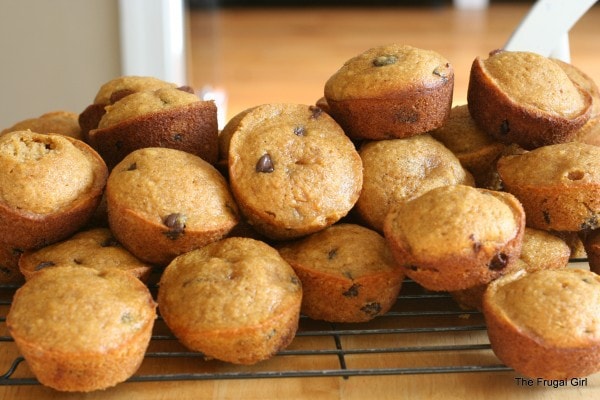 The other day on my Facebook page, I related a funny story about Zoe and some muffins that I made, and a reader asked if I could share the recipe. This works out perfectly, because my well-laid plans to write up the recipe for these cinnamon rolls sort of got derailed!

The muffins I made that particular day were based on a Pumpkin Chocolate Chip Muffin recipe from Crystal Paine’s blog, MoneySavingMom. I don’t know if it’s just the case in my area, but pumpkin has been completely unavailable for months now, which means that this recipe has been collecting dust. The other day, though, I noticed that a couple of my sweet potatoes were getting rather wrinkled and dry, so I boiled them, peeled them, and ran them through the food processor. I ended up with about 1 pound of mashed sweet potato, and since mashed sweet potato is awfully similar to canned pumpkin, I just substituted it for the pound of pumpkin called for in the recipe.

I’m pleased to report that this was a complete success and that the results were virtually indistinguishable from muffins made with pumpkin.

Crystal’s recipe is available on her blog, of course, but the recipe I’m sharing here is my modified version. In addition to my sweet potato change, I also subbed milk for half of the oil, and a cup of whole wheat flour for a cup of white flour. Another idea is to substitute applesauce for some of the oil. I didn’t have any applesauce on hand, though, and I was not about to cook down some apples into sauce only to use them in muffins. Homemade applesauce is so good that it must be eaten on its own, in my opinion!

Even with the modifications, I will offer the same disclaimer as Crystal, which is that these muffins are not the pinnacle of nutrition, but that they are tasty (and if you make them to use up some wrinkly sweet potatoes, that should absolve you of some of your guilt.). 😉

This makes 36 smallish muffins, which is not an inordinate number for our family. If you have a smaller family, though, you can cut the recipe in half or simply freeze any extra muffins. 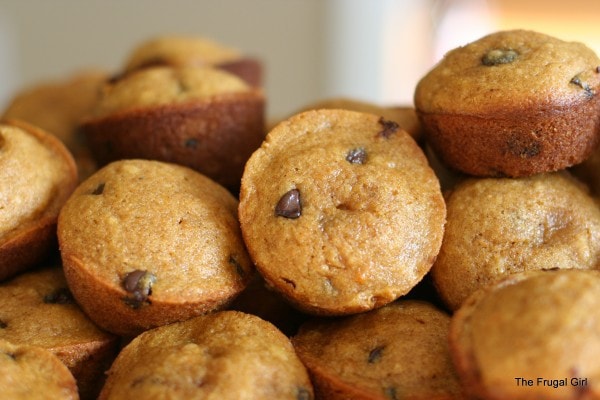 Just made this with some canned sweet potatoes that someone gave us and I was rather skeptical about eating. Thanks for the great recipie!

I think that's a smart idea...I can't imagine that canned sweet potatoes are delightful on their own!

I used half Splenda, half sugar for this recipe. Very yummy and I appreciate the 1/3 whole wheat as well.

Just made these muffins. I split the oil in half - using applesauce. Instead of whole wheat flour - I used buckwheat flour and craisins for the chocolate chips. I was only able to make 24 muffins but that is enough for us. :D Thanks for the recipe!

We occasionally go to the bagel shop, and my boys were really disappointed because they are no longer carrying the pumpkin muffins that were available in Oct/Nov. So I remembered seeing this recipe and decided to try it out. Success! Happy boys, happy husband. I'm even mailing some to a friend who loves pumpkin muffins, as well.

I had searched high and low for pumpkin, as well, when Crystal first posted this recipe. To my dismay, I found nothing! Thank you , thank you, thank you, for posting this alternative! Blessings!