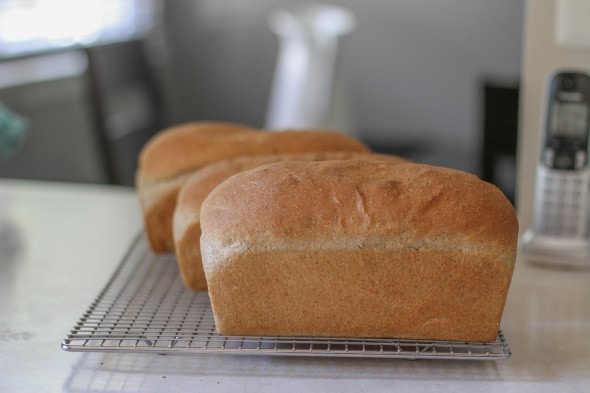 Recently, a reader sent me the following email:

I love the fact that you bake most of your breads and have tried to start doing that more often, but my question is this: How much does it save you to bake all of your breads, rolls, buns, english muffins,etc. especially when you can get them at ALDI for next to nothing? Have you ever figured it up to see the savings or do you do it more for the healthy part of it? Just curious!
Thanks!

Sara is not the only reader who’s wondered this, and I’ve never even sat down to figure out the nitty-gritty price details either. So, I thought a post devoted to this topic would be good for me and for you!

First off, I should say that in my mind, homemade bread is more about eating really good, really fresh bread than it is about saving money. I could probably buy uber-cheap bread at the store and save some money over homemade, but I infinitely prefer the experience of eating homemade bread, especially when it’s warm from the oven. You really can’t buy bread like that from the store.

There is some pretty good bakery bread out there, yes, but I’m pretty sure that buying truly good bread would cost me way more than it costs me to make truly good bread.

Though not every bread I bake is healthy, I do bake partly because I can control what goes into my breads. I never have to worry about what preservatives are in my bread or whether or not there’s high-fructose corn syrup in the ingredients. I never have to worry about finding hydrogenated oils or soy products in our breads. I can use freshly ground whole grain flours when I bake (though I don’t do that all the time!), and you can’t get that at a bakery.

Even when it comes to the more indulgent breads I make like Cinnamon Crisps or Overnight Cinnamon Rolls, I still think what I make is better than what you can buy at the store. I use butter, not hydrogenated butter substitutes, I use real ingredients in my frostings (no stabilizers or fillers…just butter, cream cheese, sugar, and vanilla), I use local eggs, and I use unbleached flour.

I know about all the ingredients in our breads, and that makes me happy. Nothing unpronounceable or unrecognizable goes into what I bake (Michael Pollan would be proud!).

Ok, but what about the cost?

To do am Amy Dacyzyn-like comparison, I bought a loaf of super cheap white bread. It’s a one pound loaf and it cost $.99. 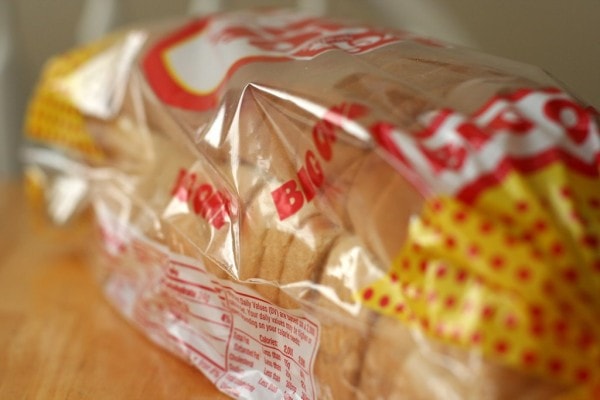 Basically, this bread consists of flour, water, high fructose corn syrup, yeast, oil, salt, gluten, and a bunch of preservatives that I am too lazy to type out.

However, I am very certain that this bread fails Michael Pollan’s real food test if only because it contains azodicarbonamide (it’s hard to pronounce and I don’t know what it is!).

My sandwich bread recipe is probably the most similar to this type of bread, although my recipe calls for milk instead of water. 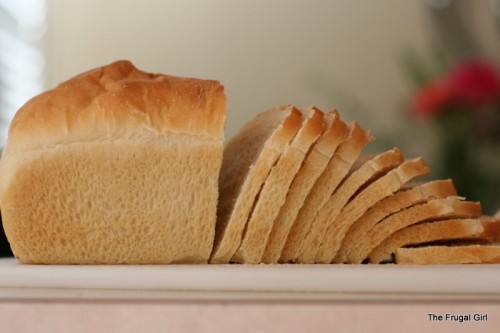 I’ll go through the ingredient list and do a price breakdown so that we can figure out what’s cheaper…store bought or homemade.

I buy my yeast in bulk, which is the only way to go if you want to save money by baking. Yeast in packets is way, way, too expensive. Two pounds of yeast costs me about $3.50. As best I can figure, this means that each 2 1/4 teaspoon portion of yeast costs almost $0.03.

The cheap store-bought bread contains water, not milk. Water costs a negligible amount, so I’m not even going to count that in the cost per loaf.

The store bought bread uses oil, so that’s what we’ll use too. Generic vegetable oil is usually about $3 for 48 oz, which means that each tablespoon costs $o.03.

What about electricity costs for the baking, though? Mr. Electricity estimates (though he thinks this is high) that an hour of 350 degree baking costs $.24. This assumes a price of $.012/kwh, which is higher than what I pay (I pay below $0.10/kwh).

So, the half hour of baking this bread calls for would cost $.12, and we can assume this is probably on the high end of things.

What about the time cost?

Bread baking does take a few hours from start to finish, but actually requires very little hands-on time. It takes me about 10-15 minutes to make a batch of dough, and then the dough needs to rise for an hour.

It then takes me another 5 minutes to shape the risen dough into loaves, at which point the dough needs to rise for another 30-45 minutes.

And then it takes me all of about 1 minute to put the risen loaves into the oven, where they bake for 25-30 minutes.

Add in another few minutes for doing dishes and wiping counters, and I’d say there’s maybe a 25 minute hands-on time investment. I have bread baking down to a science, though, so I think I get it done in less than 25 minutes.

A loaf of storebought white bread costs $.99 (though it might be less at Aldi. Readers?).

So, without including the time factor, homemade bread is cheaper or at least as cheap as most storebought white bread, especially if you take into consideration the fact that a loaf of homemade bread weighs more than 16 ounces.

Once you add in the time factor, though, storebought bread wins. Even assuming a minimum wage time value, 25 minutes of effort bumps the homemade bread cost way up.

Why don’t I give up baking my bread?

Mainly it’s because I like good bread. Comparing a loaf of freshly-baked homemade bread to a loaf of processed, airy bread isn’t really fair…it’s almost like comparing apples and oranges.

It would be much more fair to compare a loaf of homemade bread to a loaf from Panera, and if I did that, the homemade bread would win hands-down price-wise.

So, it’s much cheaper to satisfy my desire for good bread by baking my own than by buying good bread.

Along those same lines, once you start getting away from bargain basement bread comparisons, homemade bread really starts to gain an advantage. Whole grain bread, English muffins, bagels, cinnamon swirl loaves, coffeecakes, dinner rolls and the like are all fairly expensive, and I am positive that the homemade versions save me money. Maybe making sandwich bread doesn’t save me a bundle, but making cinnamon bread does.

What should you do?

I don’t know…that’s for you to decide! Your time, your tastes, and your priorities may be different than mine, so I can’t say whether or not you should take up yeast baking. I’m positive that I’m going to keep baking most of my family’s baked goods as long as I’m able, but that might not be the best choice for you.

If you are a happy baker like myself, though, I think you can rest assured that at the very least, you’re not putting yourself into the poorhouse by baking from scratch.

Readers, what do you think? I’m really interested to hear your thoughts on this topic!

If you factor in the time to go buy bread that does even out. Also you can make and freeze bread and you can buy massive bags of flour at places like Costco.

Sorry for the misspelling in the previous Post. I am curious of the keto bread. Do you have recipes for that? Thank You,Gayle

I have no tips about keto bread. All of the bread I make is full of carbs!

I made yeast rolls this weekend . When I went to bed the dough had risen beautifullly. Whe I got up the next morning it had fallen. I remember my Mom leaving them out overnight to rise. I used Bleached Flower and New Yeast. What could have Happened? Thank you Gayle

That sounds like an over-rising problem. Over-risen dough will puff up and then deflate.I know in the past, yeast was less powerful than modern packaged yeast, so that could explain why your mom was able to leave it overnight. Or could she have been using sourdough? That requires a very long rise time.

With modern yeast doughs that are supposed to have an overnight rise, only a tiny amount of yeast is used (like 1/4 teaspoon!).

So, I'd give this another try, and just let the rolls rise until double, and bake them right then.

What a great post! I often wondered if I was really saving money baking my own breads, but quite frankly, my biggest concern was what I was ingesting. After learning to bake my own during this Covid-19 crisis, I haven't looked back! I only buy bagels (but that's next on my to-bake list), and I found a great recipe for crusty bread that I am addicted to! So, all-in-all, I agree that baking your own breads, loaves (carrot cake & banana breads) are not only cost effective, they are also way of knowing what ingredients are in each item, and baking is very therapeutic.

I just made bagels for the first time tonight! They were surprisingly easy, though it took a little time here and there - I'm on maternity leave so I have a little bit more time. I'm really happy with the taste and texture- infinitely better than store bought and WAY cheaper. My husband immediately ate half the batch - I can't wait for my son to try them in the morning. I will definitely make bagels again.

The intangible: Kneading the dough for 5 minutes is cathartic. In fact I have a professional stand mixer with a dough hook and I seldom use it. Total time in is similar (around 15 minutes per 2 loaves). Feeding my family fresh sourdough every morning is priceless. Having your kids' friends come over to visit and gobble down slice after slice is a great feeling. And those rare occasions where I add in some dried cranberries as a surprise... the reaction of my wife and kids is a great start to the day for all of us!

The tangible: 1) I make homemade sourdough ($0 for yeast) and the cost of making it including electricity is $.36 / loaf, sometimes cheaper if I throw other things in the oven at the same time. At the store on sale I can get a 1 pound loaf for $2.50, but it's usually closer to $4 and may or may not be fresh. 2) As you gain experience you can make beautiful artisan bread. When visiting friends make them one! It's a heartfelt gesture and much cheaper than a bottle of wine!