Did you know that the weight of prepackaged produce (such as potatoes or oranges) can vary?

Typically, each container/bag will have at least the amount promised on the package, but some will have more produce than they’re “supposed” to. 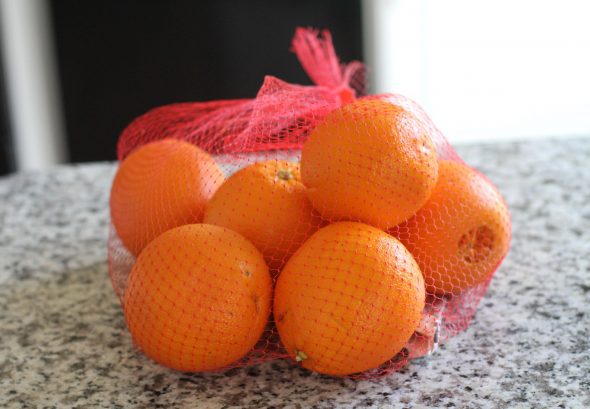 For instance, when I bought a 3 pound bag of oranges at Aldi yesterday, I easily found a bag that weighed 5 pounds and I bought that one instead.

Since the bags are pre-weighed and sold per each and not per pound, a 5 pound bag ends up costing almost half as much per pound as compared to the 3 pound bag. 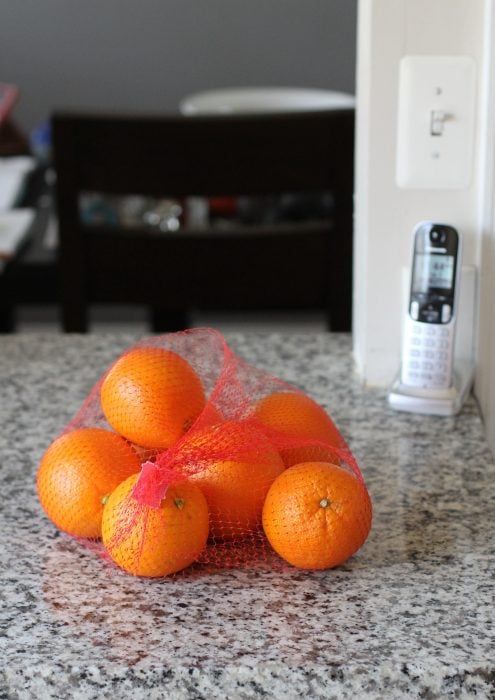 Obviously, you’d only want to do this with produce that you know you’ll be able to use before it goes bad.   If you can’t get through 5 pounds of oranges in time, leave the bigger bag for someone else. 😉

Have you ever tried weighing prepackaged produce? I’d love to hear!

P.S. On a related, but opposite note: if you are buying produce sold per each and you have a small household, you might want to look for a small package, even though it won’t save you money.

Buying only what you can use helps prevent food waste, and that’s a big environmental win. For instance, when it was just Mr. FG and me, I used to purposely look for a smallish head of lettuce since I knew we probably wouldn’t use up a big head before it went bad.

(And actually, I still do this when I buy cilantro or other super perishable produce.)

Excellent tip. I also didn’t think of that. Also some good ideas in the comments!

Since the topic of keeping lettuce was mentioned, here's what I do to keep heads of romaine, green leaf and red leaf lettuce longer. In fact this works so well, it's about the only lettuce I buy. When it comes home, I slice a thin slice off the end to remove the brown part. I then plop it in a pitcher of very cold water. (I use an old, discolored ice tea pitcher for this. The bowl of a salad spinner is another good option.) Let it sit for a couple of hours. Soon the lettuce will look just-picked. I rinse it thoroughly, give it a good shake and drop it in a large (recycled) plastic bag. The double bags that Costco bread comes in work well. I drop in a paper towel or two and stick it in the fridge. I use a little each day for DH's lunch sandwiches. About every third day, I slice a bit off the end so it doesn't get slimy. Keep the damp paper towels in the bag. Unless they're sopping wet, which they won't be if you shook the lettuce off well (or better still, spun it), your lettuce will last longer than you would believe possible. Bonus is that you don't have to wash the lettuce every time you just need a leaf or two. Should it start looking wilty before you can use it all, slice off a bit more of the stem and give it another ice bath. I kid you not, lettuce keeps for weeks using this easy-peasy method.

Wow! That is a tip I have not heard before. Thanks for sharing!

I weighed my "3lb." bag of sweet potatoes I bought at Aldi the other day before I turned some of them into dinner for tonight: 3.5 lbs! Yeah, free half pound of sweet potatoes! Thanks for the tip - I usually count the number of fruits in a package, say, of apples or oranges, because I think of it in number of servings. But things like potatoes, I will definitely be weighing from now on.

More than weight I always count how many pieces are in bagged fruit like this. I'd rather have more pieces of fruit that are each smaller than larger & fewer pieces. The larger apples & oranges are more than one serving for my diabetic husband so we sometimes end up with a half eaten piece of fruit in the fridge that gets forgotten.

I hate buying cilantro for FG's salsa and having to throw away what rotted. I found a neat herb keeper on Amazon, sturdy plastic with a nice tall lid that comes down over the base. Solves the problem, similar to the way Deidre and Carol do, but if it tips over it's a sealed container and no water leakage. Also highly recommend looking on EBay, or wherever you can find old Tupperware for the smaller version of the lettuce keeper with the spike insert. I've recently slowly used up 2 different heads of lettuce by keeping them in my keeper, without any of it rotting. The spike keeps it from sitting in any water, and you can just pull off and wash what you need when it's needed. And it doesn't take up as much fridge space as their newer models.

Thanks, FG, for the weighing pointer. I, too, had no idea they might be different than labeled.