I like the idea of the Food Waste pictures. But I worry sometimes about the incentive it creates for myself when I view food going bad as a really awful thing. For one, I buy fewer groceries, so they won’t rot in the fridge or cupboard. But a year or two ago I realized I had a pretty bad habit of ordering pizza on the nights there were no good groceries in the house. That wasn’t a win from a financial or health standpoint. I also made a conscious decision about a year ago to overbuy produce, even though we do see some of it go bad. This is because I want us to eat more fruits and vegetables. I’d rather have us all eating an extra serving because there’s so much of it, even if some goes bad, then have the kids wander by the counter, feel a vague urge for a banana or apple, and then not have one there.

I actually agree with Laura, and this is such a good reminder, I thought we were maybe due to discuss this again.

In fact, that hasn’t been my main strategy at all. Oddly enough, since I started blogging (almost 4 years ago now!), we’ve begun to eat more produce than we did before, mostly because I started shopping at Aldi, which meant I could suddenly afford more produce. 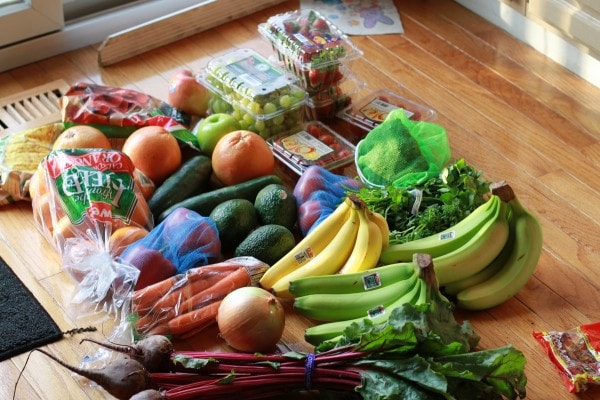 So, I buy more produce now, and yet waste far less than I did before.

Well, for one thing, knowing that I’ll have to show you all of my waste makes me much more inspired to use up my produce. Before, I’d stare at the green beans and feel utterly unmotivated to trim and cook them, and now, even if I have no other motivation, I cook them because I don’t want to have to show you moldy beans!

Public accountability is a marvelous thing.

A second uber-helpful thing has been a more detailed menu plan. I used to buy produce willy-nilly, bring it home, and forget to use it. Now when I plan my menus, I write down which nights we’re having salad, or roasted green beans, or steamed broccoli. This helps me buy and use the produce.

A third useful tactic has been paying more attention to what’s in my fridge. Before, I used to rummage around in the fridge looking for whatever I was in the mood to eat. These days, I do more mindful rummaging (Is there such a thing??), searching for produce that might need to be used.

Lastly, I’ve learned to use the most perishable produce first. At the beginning of the week, we eat up the berries, spinach, and bananas, and by the end of the week, we’re more likely to be eating things like citrus fruits, carrots, and hardier greens.

Admittedly, I could have cut back on my food waste problems by simply buying less produce.

In fact, avoiding fresh foods is a very simple way to waste less. As a rule, the fresher and less processed the food, the more likely it is to go bad.

And if low food waste was the goal to trump all other goals, maybe I’d choose Ramen over avocados.

But, as so often is the case, there are multiple virtues we should be striving for, and elevating one way above the others causes us to have unbalanced lives.

For instance, if you strive for a low grocery bill above all else, you’re probably not going to buy enough healthy food (by the same token, if you raise organic food to the tip-top, you might find yourself in debt, especially if you shop exclusively at Whole Foods!)

If frugality in general is your highest goal, you probably won’t be generous.

And if zero food waste is the be all, end all to you, your kitchen probably won’t boast much green food.

So, please don’t ever think that I’m advocating a low-produce sort of existence. That’s not at all the point of Food Waste Friday. I want you to keep buying produce! I just want you to use what you buy.

Need more food waste tips? Check out 10 Ways To Reduce Food Waste. And join the rest of us on Food Waste Fridays! The accountability it provides has changed my life.

Your turn! How do you manage to buy plenty of produce without wasting it?

We love the quality of the produce at Aldi's. Not only is it affordable, it's usually fresher than what we find at our local grocery store.

I usually check on the produce before making a meal in case I've forgotten some that needs to be used. Using the most perishable first is the best! For the "end of the week" produce we include beets in a jar, onions, carrots, and (hangs head in shame) frozen veggies. We almost never buy canned veggies because of the can liners, but we still buy frozen veggies, especially stir fry mixes.

I live in a town where you can buy big bowls of fruit and veg in bowls for just £1. Now theres just two of us in our house so i never usually bother buying these bowls of food as i just couldn't get through it all.

However in the summer I do tend to buy soft fruit bowls and we share it with our neighbors and they share their veg with us. It's so much cheaper than buy half the amount for more money. for instance 1 red pepper in Sainsburys costs about 80p but I can get a bowl of about 5 red peppers for a £1.

I can't stand throwing away something that cost me money unless it's totally used up. Once I threw away an avocado that I just didn't use in time (but could have), and as it dropped into the trash I realized that it was just like throwing a dollar bill away. That made this skinflint cringe. :P

My response, since I don't exactly like vegetables anyway, is not buy very much, and only what's really cheap. This results in not having a very well-rounded diet, which I also was not happy about.... But lately we've been buying from Bountiful Baskets (it's an online thing) and it gives us much more variety for an acceptable price. It's kind of fun to see what we'll get and to enjoy eating the yummy stuff that I would have a hard time buying otherwise due to how expensive it is at the grocery store.

Kristen, i saw the picture the other day and didn't get to ask the question, and here it is again. What do you do with beets? I don't see any recipes with beets in your weekly menu plan that week, and i would love to get new ideas for using them. Thanks!

I thought I'd pop in here about beets. We love cooked beets sliced and warmed in orange juice. Or we add some to the top of salads. They are really good in salads, especially with spinach! You can put cooked beets in pickle juice and then eat them just like that as a side dish or on salads. You can cook them "Harvard style" with a little vinegar and sugar and then thicken the sauce with a bit of cornstarch. Mix slices with orange segments for another salad. layer with pieces of avocado for quick salads that are delicious! Enjoy!

I've done much better on the food waste the past year or two - before I'd buy stuffa nd it'd just go to waste -s ame with leftovers. this week I'm tossing a 7 layer salad - too salty for me and too much sour cream. Im' bummed because I made the salad to use up the refried black beans I'd opened and not used but I forgot the salt in them - reg canned beans I drain and rinse a couple of times but can't do that with refried(at least not easily!)

now I try to have meals in mind when I buy produce/bread - I have 2 buns left (well 3 but one will be another burger) and the plan is to either freeze the remaining 2 buns or fix another type sandwich.

I'm also really angry with Randals' -t hey're the grocery nearest me and I can't count the times I've bought produce there that's no good - I get home and eat 2 clementines and the rest are hit and miss - some already moldy or dried out. happens with berries too -pick up some before work and get her and ready to eat them around 9 or 10 am and they're already moldy. I think bananas are the safest thing to buy there and apples - otherwise I have to cross my fingers. walmart is bad too sometimes. Kroger I've done better with but it's a drive there.