This is a fairly recent development at our house, but it’s working out so well, I had to share. 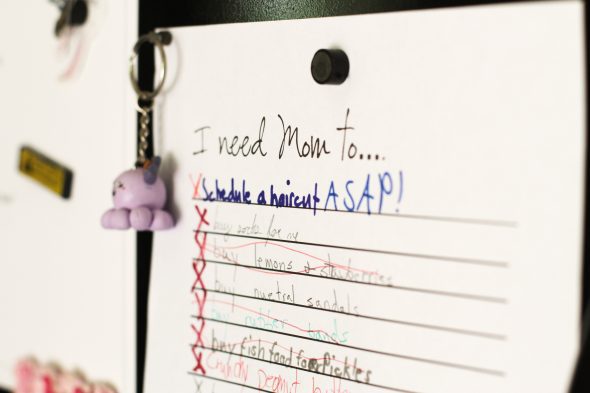 It came about because I realized that while my kids do let me know when they need something from me, they often ask at a time when I can’t really fulfill their request.

And then later on, I just forget what they asked me for in the first place.

I do want to take care of the stuff they ask me for, but apparently I am rather forgetful.

For instance, Sonia needed some neutral sandals (the only pair she had were these $4 hot pink ones). But I kept forgetting to actually take her out to buy a pair!

I made a plain Jane Word document titled, “I need Mom to…”, printed it out, and stuck it on the fridge. 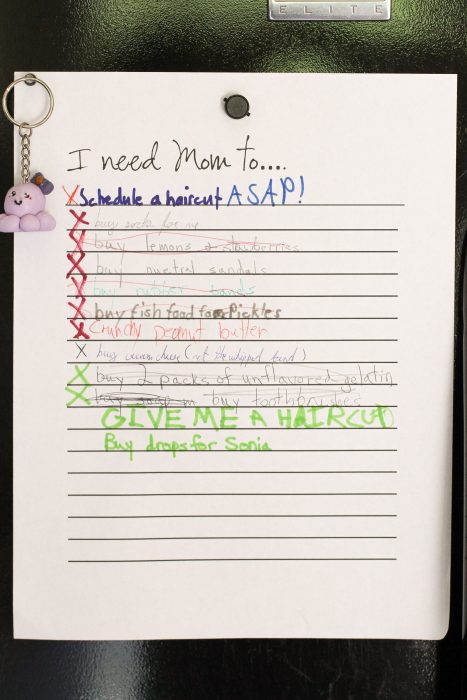 My kids have been good about remembering to write down the things they need, and since I like to cross things off of lists, I’ve been pretty good about getting around to their written requests.

It’s such a simple idea, but it’s been super helpful for me, and I hope it is for you too.

The document I made is nothing fancy, but in case you want to snag it, I uploaded it as a PDF.

Though our kids are on to families of there own, your description above it strikingly similar to what’s going on between my husband and I. With aging and illness’s keeping our minds not focused clearly, we can’t remember what we asked or told each what we need help with. So, this is what I am implementing for us to stay on track with each other’s needs. Thank you!! t a time we needed this most. We are so vey great full to you and your page♥️♥️♥️♥️

So smart!! I love how it goes from "schedule a haircut" to "give me a haircut," like they just gave up waiting LOL! I'm assuming not the same kiddo, but still funny!

Ha, yes, it's a different kid! But still funny.

What a great idea! Our fridge isn't magnetic, but I have a message board I could do this with.

This is pure genius Kristen... I printed it out and shared it on Facebook. And you're so right.. my kids will tell me what they need but at the most inconvenient times... for instance when we've just left the store they'll tell me something that I should have bought them while we were in the store. !?!?!?

"It came about because... they often ask at a time when I can’t really fulfill their request." Oh, boy, I can sure relate to this, and not only with kids -- adults do that plenty! I like your solution! It seems as if it will work well if they are at home when they think of the need (or can remember when they do get home).