On Sunday afternoon, Mr. FG and I watched Tapped, a documentary about bottled water.

I have never been a fan of bottled water, and so I expected to be in agreement with the message of the documentary. I did not expect to be so completely and utterly disgusted by the production practices, and I didn’t expect to feel so depressed.

I’ve always known that bottled water is insanely expensive (I think the mark-up is something like 1900 times).

I’ve known for quite a while now that a lot of bottled water is merely filtered tap water (Aquafina and Dasani are two such products).

And I’ve thought for quite some time that the amount of plastic produced by the bottled water industry is unnecessary and excessive. 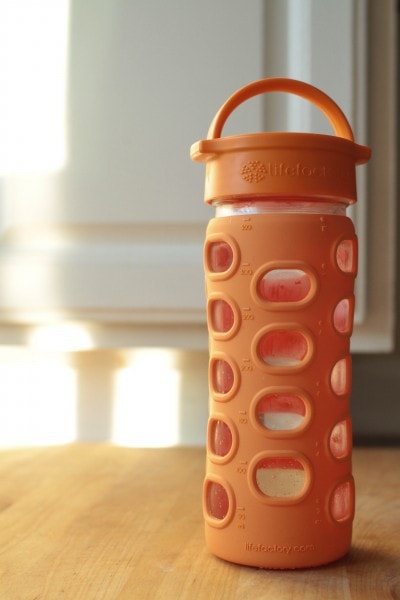 But I never really thought before about where bottled water comes from. Tapped showed how a Nestle company, Poland Springs, scouts out areas where water laws aren’t very well thought out (like in Maine), quietly buys up land, and trucks the water out.

And they showed how bottled water plants in Georgia and North Carolina pump millions of gallons of water out of the public supply in the midst of a drought. People are on water restrictions, public reservoirs are drying up, and the local bottled water plants just keep on chugging along, bottling water, packaging it, and shipping it off to places where people already have access to water.

Seeing that practically made me want to cry.

Also, I have always assumed that though bottled water is unnecessary, expensive, and wasteful, it is at least pure.

Not so. Bottled water is very loosely regulated (the equivalent of half a person at the FDA is in charge of the whole bottled water industry), the bottled water companies are responsible for their own testing, and they don’t make the results of their tests public.

In contrast, tap water has to be tested between 300 and 400 times per MONTH, depending on the population of the area, and the test results are made public.

The makers of Tapped sent several different brands of water off to two independent test labs and the results were read by someone independent of those two labs. The bottled water contained stuff like styrene and phthlates.

Pure? Not so much.

And the tests they did on bottled water that had sat in a car trunk for a week were even worse (the plastic bottles that are supposed to be so safe appear not to be).

And then there is the matter of the production/waste of those plastic bottles. I was so disheartened to hear about how few plastic bottles get recycled (people drink water on the go and don’t want to bring the bottle home to recycle it.). So they just throw it away, and an amazing number of these bottles end up in the Pacific Ocean.

Plastic bottle deposit programs (I’m a little confused about how they work, but I know they end up costing the manufacturer in some way) increase the recycling rate to something like 97%, but bottled water companies steadfastly resist this idea, and instead say they support curbside recycling (which isn’t very effective since people drink bottled water on the go, not at home).

Of course they support curbside recycling. Because that program is paid for by taxes, and it doesn’t cut into their bottom line.

Bottled water bottles are obviously made from oil, and Tapped showed an oil refinery in Corpus Christi, Texas. The health problems experienced by the people who live near the ever-growing refinery broke my heart. Often we think of pollution just in terms of what it does to the environment, but this documentary reminded me of the impact it has on people (as an example, the cancer rate in that county is 80% higher than elsewhere in Texas).

I know that the bottled water industry is not the only one that uses oil or that uses water, but what makes me so frustrated about it is that it is almost completely and utterly unnecessary.

Here in the U.S., we have a tap water system available to us that is tested rigorously, that costs almost nothing, and that produces no plastic.

Bottled water requires plastic bottles, many of which are not recycled, and even the ones that are still use energy (recycling plants have to have energy to run).

And a lot of bottled water is just TAP WATER anyway!

So, why in the world are we spending more than 100 billion a year on bottled water??

Also, I think we are a culture of convenience. We like to have water with us but we don’t want to bother to actually fill it up, carry it with us, carry it back home with us, and wash it.

I feel quite convinced that the bottled water industry is a money-making machine that doesn’t care about the environment or even about our health. I’m not in a place where I can make laws against them or do something big, though, and you probably aren’t either.

But, we consumers hold an enormous amount of power here because if we don’t buy the water, the manufacturers will not produce it.

I know that a number of you will comment and share that your water tastes bad or is unsafe.

But, for every person that truly does have bad water (and after watching Tapped, I’m not at all sure bottled water is going to be any safer for you!), I’m positive that there are many more whose tap water is perfectly potable.

If your water tastes disgusting, buy a filter. When Mr. FG and I rented our basement apartment, we thought the water had a weird taste. One Brita pitcher later, we were happily drinking the tap water.

costs $22.99 on Amazon, and even with the continued cost of new filters, you’re going to recoup your cost in no time if you quit drinking bottled water.

If you don’t trust a Brita filter, consider one that fits onto your tap, or one that’s a little more involved. Over time, even the more expensive systems will pay for themselves. 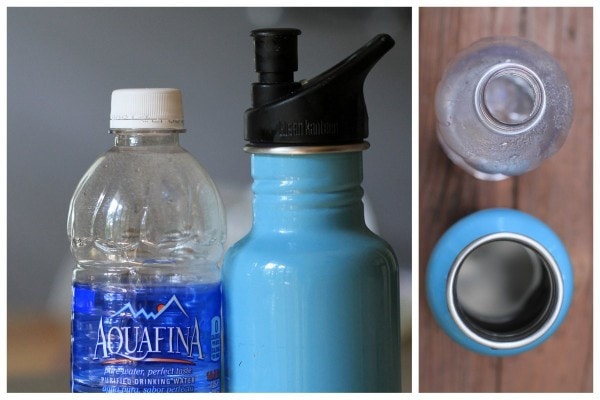 . We own six Klean Kanteens, one for each of us, and we love them. Klean Kanteens don’t come cheap, but I actually think that’s a good thing. If you’ve forked over $15 for a stainless steel bottle, you’ll value it enough to keep track of it and reuse it.

I know some of the ideas I share on my blog take time to implement, and I know they won’t work for everyone.

But I really think that everyone on the planet has time to run their water through a filter (if they feel it’s necessary) and fill up a water bottle. It just doesn’t take THAT long. If you don’t have time to do it, you probably don’t have time to read my blog (and I’d be thrilled if you gave up reading my blog in order to have time to give up bottled water!).

And if you don’t buy bottled water, you won’t have to lug cases of it to your car, out of your car, and into your house, so you might even save time by giving it up.

Give it a try, won’t you? Tap water is a win, win, win, win situation in almost every case, and I strongly urge you to join me in making it your beverage of choice.

Air consists of few contaminants. However, the quantity of contaminants inside a sealed bottle wouldn’t enhance over time. It wouldn’t be worse to drink but then it comes down to how tightly the lid has been sealed.

I'm 84 years old. I've drank water from a garden hose ,from plastic bottles, from buckets on a baseball field with a ladle, from spigots on buildings, water in swimming pools (if you swim ,you're drinking it ),park fountains, public fountains in schoos & businesses,and i never had a problem. Even non-pasturized milkin service from a farm & in France without harm. This bottled ,plastic-glass is a load of crap ,to sell water instead of tap water !!!

I drink distilled water, or any bottled water. Our municipal h2o tastes noticeably unpalatable, even after going through a brita filter. If I make ice, I can visually discern, in a second, the 'spring' water from the tap water and the distilled water. I recycle every recyclable container that we use. If you read about municipal water, it at one time or other has everything from feces eating bacteria to pharmaceutical drug residues, to chemical industry pollution in it. Sorry, but what we eat and drink is very important, and I cannot give something 'a try' if I have doubts about it.

Aren't those pitchers w/ filters made of polycarbonate? Polycarbonate is formed by the combination of BPA and phosgene.

Hi Kristen, I am SO glad to see someone else who is so down on plastic water bottles. Plastic is the bane of our society and the DEATH of billions of fish, birds and animals. Birds, animals and fish stick their necks through the sixpack holders and wear them until they die. Fish swallow plastic bags in the ocean mistaking them for jellyfish, and die. Birds pick up plastic floating in the ocean and feed it to their young, they die. There are several "Islands" of plastic bigger than the state of Texas floating in the Pacific Ocean between the US and Asia, also in the Atlantic. Enough plastic if collected, to recycle and supply us for tens of years. But right now it just kills whatever is in the ocean. I would totally be on board with a $1.00 per item deposit for any container. You go to the supermarket and they have a young person who counts your bottles, cans, or whatever and issues you a credit which you turn over when you check out and is deducted from your receipt. Not too many bottles and cans would be seen dumped any more! And if they were there would be plenty of people happy to pick them up and turn them in. The only cost would be the cost of the young person at the supermarket or recycling center - and we need more jobs. And we would save on trash pick up, better looking neigborhoods and beaches and the lives of millions of birds, animals and fish saved. But what does Big Business care about that? For an extra dollar on their bottom line most of them would happily sacrifice every bird, animal or fish on the planet