I’ve been making this stir-fry for years, so it’s been in my menu plan posts regularly. But for some reason, I’ve never posted the actual recipe. 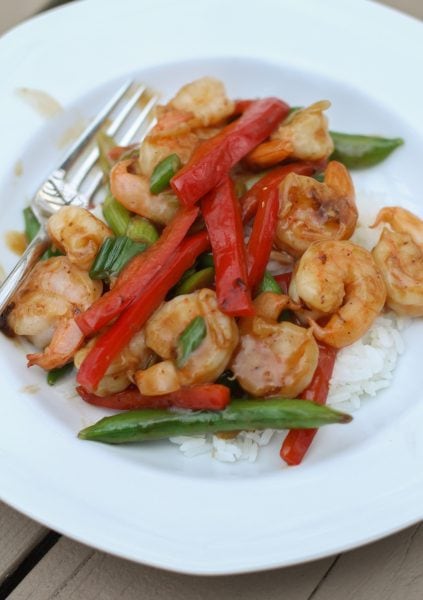 Several of you had recently asked how to make a stir-fry, though, so that reminded me to get this done.

You’ll need a pound of raw shrimp for this recipe.   Frozen shrimp are fine; in fact, that’s all I ever use!

Combine the shrimp with ground ginger, cayenne pepper, garlic, black pepper, and sesame seeds (optional).   If you’re not into spice, use less cayenne. 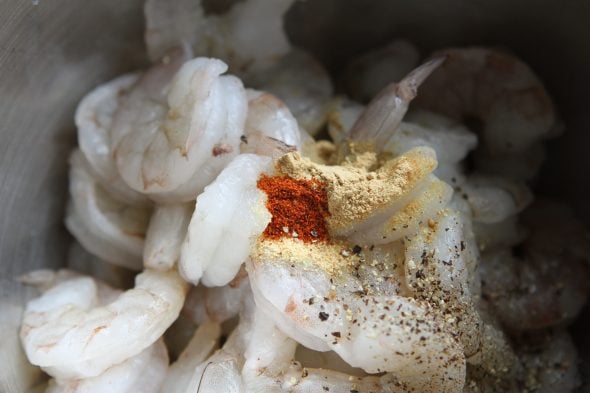 The original recipe directs you to put the shrimp and seasonings into a plastic bag, but I just always use a metal or glass container for marinating/seasoning.

One less bag to waste!

Let the shrimp sit in the fridge for about 20 minutes while you prep the other ingredients.

Here’s the rest of what you’ll need.   Stir-frying goes fast, so it’s best to have everything ready to go before you heat up your pan. 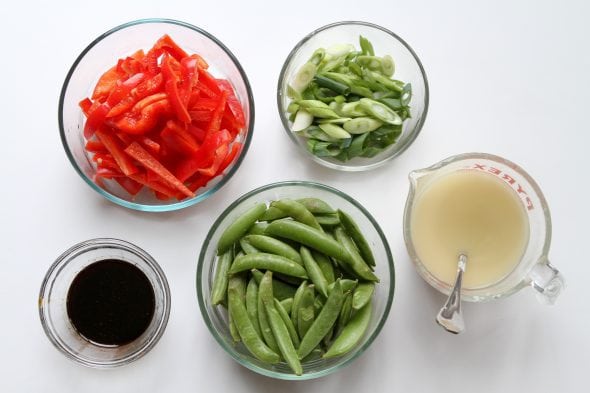 For veggies, we have julienned red pepper, sliced green onions, and whole sugar snap peas. I’ve also used green beans in place of the peas, and yellow or green pepper in place of the red.

And for the sauce, there’s a chicken broth/cornstarch mixture, plus some teriyaki sauce.

You can buy teriyaki sauce, of course, but it’s also super easy to make.   I use the recipe from this teriyaki chicken. 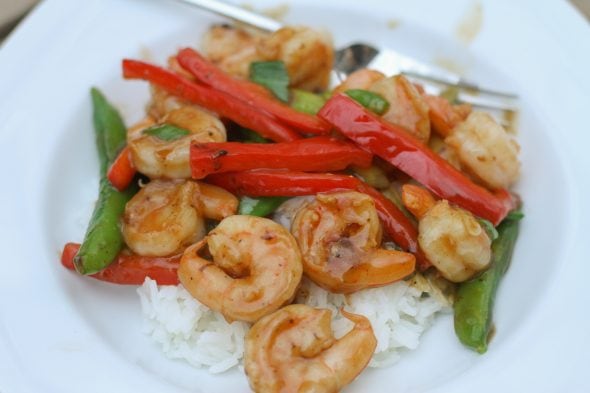 So! I heat my skillet over medium heat with a tablespoon of vegetable, and add the shrimp.

Once that’s cooked, I dump the shrimp onto a plate, add more oil to the pan, and let it get hot again.

Then I add the peas and peppers, and cook them until they’re crisp-tender.

Next, I add the green onions, saute them for just a minute or two, and add the teriyaki sauce and the broth mixture.   That thickens up in about 30 seconds, and then I stir in the cooked shrimp.

Heat a tablespoon of oil in a skillet over medium heat until nearly smoking.   Add shrimp and cook, flipping once, until opaque (a few minutes on each side).   Remove shrimp to dinner plate; set aside.

Return skillet to heat with one more tablespoon of oil.   Heat until nearly smoking; add peppers and peas. Stir fry for a few minutes, or until veggies are crisp tender.   Stir in green onions and cook for one minute.

Add broth mixture to skillet and cook and stir until thickened, about 30 seconds.   Stir in shrimp until heated and coated with sauce.

recipe slightly modified from the original on All Recipes

Thank you for this recipe, Kristen! Just made it tonight and it was tasty! I used a little sesame oil for extra Asian flavour, plus freshly-ground ginger (which I keep in the freezer - easy to grate in its frozen state). DH had seconds!

Me, too! All of the above, except I also had seconds!

That sounds good! I've been out of town and still am with my husband's surgery but it would be a nice treat for him when we finally get back home.

What did Zoe eat? :). I have been following your blog since 2008. Oh how your kids have grown over the years.

Ah, I usually cook up a sliced chicken breast or pork cutlet for her in place of the shrimp.

This will be my new recipe to make this week!

Whoa! I bought potstickers for my bring-an-appetizer thing this weekend, and I wanted to figure out a dipping sauce. Then your recipe appeared like magic, so I decided to try it for dinner tonight. I used chicken instead of shrimp and doubled the teriyaki sauce recipe. It was amazing!

I followed the recipe for the teriyaki to the letter, but I winged it on the rest of the dish. Now that I'm rereading it, I see my version was more simplified (Accidentally. Oops.), but it still tasted great. Thanks for the inspiration!