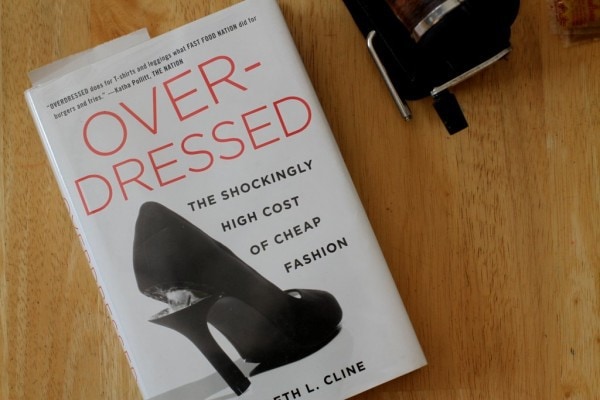 I first heard of this book sometime last year, and it instantly piqued my interest, so I contacted the publisher to see if they’d like to do a review/giveaway here. They said yes, but my review copy never quite showed up.

Eventually, I decided to count that a lost cause and I put the book on hold at my library.

Fortunately, the wait there was pretty short. In a few days, a “your book has arrived” email showed up in my inbox and I scooted off to the library really promptly to pick it up.

Once I picked it up, I could barely put it down, and I finished it in just a few days.

Elizabeth Cline has been called the Michael Pollan of clothing, and I can see why. She takes us behind the scenes, exploring the reason our clothes, shoes, and accessories have gotten less and less expensive and why we’ve been buying more and more of them.

Her tour of overseas garment factories was fascinating, and I was also really intrigued to learn more about the history of clothing manufacturing.

In addition to being interesting, some of the information in this book is downright depressing (again, not unlike a read through Michael Pollan’s books!)

Though I knew that much of our clothing is made overseas, I was so surprised to learn about how recently this switch happened.

That wasn’t that long ago.

Companies make their clothing overseas because labor there is so inexpensive. So inexpensive, that even with the added costs of shipping, it’s still cheaper to outsource the job.

And since companies can reduce costs so much this way, clothing has gotten less and less expensive as time has gone on.

That means we buy, buy, buy, buy, and then do some more buying. And then we end up with way more clothes than we can wear. While we do donate some of them (more than thrift stores can even sell!), we also throw a lot away.

In fact, Americans throw away 12.7 million tons of textiles every year, which works out to 68 pounds per person.

I’m sure I don’t need to go over how incredibly wasteful this is…to use labor and natural resources to make things that we wear a few times and then throw away.

In times past, people tended to spend much, much more on each piece of clothing, and their wardrobes were only a fraction of the size of ours. It’s not so much that they spent a far greater portion of their income on clothing, it’s that they spent more on fewer pieces. We still spend a fair amount of money on clothes, but we get way more items for that money.

On the surface, this seems like an awesome thing (More for less. Woo!), but the clothing we buy is poorly made, doesn’t last, is generally made in factories which abuse their workers and pollute the environment, and we’ve got so many clothes, we can’t possibly use them all.

Which makes me think this more for less thing is not such a great deal after all.

What should we do about this mess?

The scope of our clothing problem is overwhelming, to be sure, and it seems like we can’t possibly make a difference. I do think there are some things we can do, but when I started writing about them here, this post became unbearably long.

So, I’m going to stop this post right here and then tomorrow, I’ll share my thoughts about how we can practically handle the clothing problem we face.

For now, I’ll leave you with a quote from the book.

“Building a wardrobe over time, saving up and investing in well-made pieces, obsessing over the perfect hem, luxuriating in fabrics, and patching up and altering our clothes are old-fashioned habits. But they’re also deeply satisfying antidotes to the empty uniformity of cheapness.”

You can get buy a hardback copy of Overdressed

(affiliate link) available for $12.99. Your local public library should have a copy as well.

Whatever method you choose, do read this book. I think you’ll find it to be eye-opening and life changing.

Also, I’m giving away a $100 Shell gift card. Unless you’re carless, you should totally enter. 😉

This is a late post, but I wanted to let you know that I just got the book from the library and was amazed. I am so glad you brought this book to our attention. I counted all my cloths, just like the author did, and found that I have 192 items of clothing! 37 of this number is found in T-shirts! I am now encouraged and emboldened to do a better job with my current and future wordrobe. Thank you for doing this book review.

Wow! I read both of your posts and I really appreciate you bringing this topic up. Both posts were thoughtful and informative and have caused me to rethink some of my shopping habits. Thanks!

Nice review! I started the book but couldn't quite finish it. One effect it had on me was to make me more aware of how poorly things are constructed, and of how cheap/flimsy the material is. It makes it very difficult for me to buy anything new now. Now that I am not blinded by advertising, even the big brand names just look like cheap stuff I wouldn't even buy second hand in the Salvation Army store.

An article inhttp://www.nytimes.com/2013/05/09/business/global/fair-trade-movement-extends-to-clothing.html?pagewanted=all&_r=0 NY Times about the clothing industry

I was watching Mary Poppins last night and noticed that a supposedly wealthy family in 1910 London had a surprisingly small amount of clothing. The "spoonful of sugar" scene shows the little girl's closet. She has maybe 4 dresses with matching hats and coats. They are all very beautiful and high quality, but she doesn't even need a rod in her closet. Just 4 simple hooks on the back wall of her very shallow closet.

Makes you think about the whole HGTV/organization craze, too... doesn't it?