(Note: The following post, which was in the works a while before my less-than-satisfactory Goodwill experience, may help to explain my surprise at the firm price on the buttonless shorts)

I wrote a while ago about how I was slowly learning the art of haggling, which is not something I’m naturally good at. Well, I recently learned that it can pay off to let the other person go first when you’re bargaining.

I mentioned before that I’ve become a big fan of wearing skirts in the summertime. They’re a lot comfier than shorts (at least to me), and they’re a much cooler item of clothing than long pants are.

So, I’ve been poking through the skirts area at Goodwill each week to see if I can find something I like. On a recent trip, I found this Old Navy skirt. 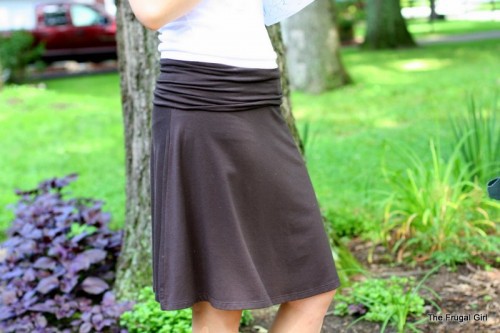 It fit me, was very comfy, and was in good shape except for a place near the hem where it looked like it just needed to be laundered.

Upon further inspection, I found that it was paint, but for some reason, most of it was loosely attached and could be scraped off.

I decided I’d ask at the checkout if they would mark it down. Skirts are normally $4.25, so I was going to offer something like $3.

I pointed out the paint spot, but before I could even mention the price I had in mind, the saleslady said, “Oh, I’ll sell it to you for 50 cents.”

I swallowed my astonishment, said nothing of my $3 idea, and cheerfully paid for the skirt.

I was able to get most of the paint off and the little that remains doesn’t bother me at all, especially when I remember that this purchase only took 50 cents out of my clothing budget.

It’s not really occurred to me to let the salesperson suggest a price before, but now I’m thinking that might be the way to go from here on out.

You never know…they might come up with a lower price than I’m expecting, and I could always bargain down from their suggested price if I think it’s too high.

Here are some outtakes for your enjoyment, compliments of my kid photographer! 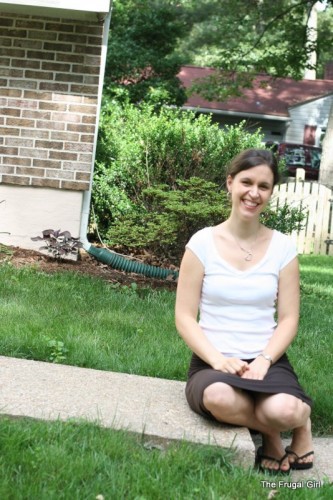 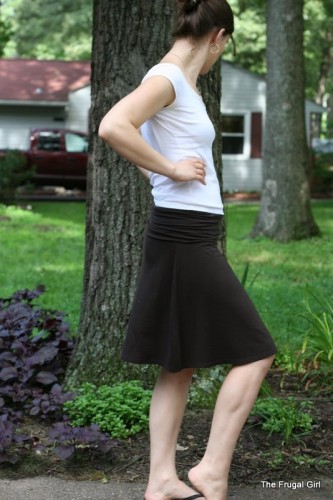 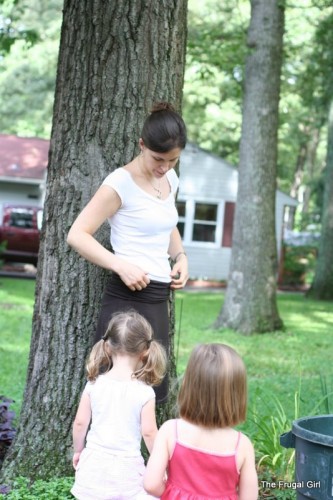 Monday Q&A | What is “doubled in size”? Plus, clothing for older kids.

[...] a few of my Goodwill finds in previous posts…my Charlotte Russe dress, my polka-dotted dress, my $.75 Old Navy skirt, my Mossimo jeans and t-shirt, and you can also see a Mossimo skirt and camisole in the picture on [...]

Congrats on giving your kid a camera to play with. With digital kids can actually take paparazzi photos without fear of wasting film. My parents bought me a camera when I was in middle school which I adored and occasionally bought me film for it. I preferred slide film and that cost more so I didn't get it as often. ;)

Here I am all these years later and photography is still my biggest hobby. Maybe he'll grow up to be a photographer?

Despite your apparent good-natured frustration with your 'zi-like son and your camera-hogging girls, I like the last two photos the most. I can just see your girls toddling over to you then hamming it up for the camera. "Hi mommy, what about us?!"

Adorable skirt! We've had tremendously hot weather lately - a skirt like that would be perfect! Love your blog - thanks so much for sharing your heart & home!

Cute skirt! I feel the same way about skirts and dresses in the summer, way more comfy.

Thanks for all the wonderful posts. I adore your blog, you've actually inspired me to start baking again. I hadn't done that in 15 years!