Every Monday, I answer a few of the questions that my readers send me. If you have a question you’d like me to answer in a future Q&A post, just leave me a comment here or email me (thefrugalgirl [at] gmail [dot] com) and put Q&A in the subject line. 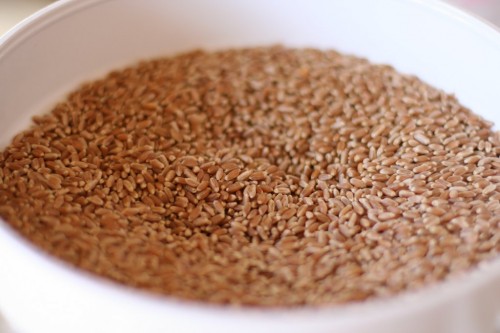 What’s your take on bread machines? Do you have one? Use it?

Also… have you ever considered grinding your own flour? I noticed a post about buying flour on sale, so it looks like you have decided not to. Any reasons why not?

I don’t actually have a bread machine, and I don’t really want one. Here’s why.

That said, I definitely think bread machines can be a good option for some people, and I don’t at all look down my nose on people who own them. I just don’t want one, that’s all!

As far as grinding flour goes, I do indeed have a grain grinder and I grind all my whole wheat flour (you can read a little more about that in this Q&A post). However, I don’t use whole wheat flour exclusively. I know it would be healthier for us if I did, but we do love us some fluffy white rolls and bread.

I use whole wheat flour when I make sandwich bread, which is what we use for breakfast toast, and for sandwiches at lunch, and I often make Whole Wheat Pancakes with my ground flour.

I’ve noticed that a lot of the frugal websites I’ve found in my web wanderings are written by persons (almost always mothers) who self-identify as overtly religious, usually along the lines of “what’s most important to me is God and my family.” I think about 80% of the frugal blogs I’ve come across are written by women who identify themselves so. This is in marked contrast to other blogs I’ve read over the years, such as political blogs, TV show blogs (I was a Law & Order devotee for many years), and book or author blogs.

Why do you think this is the case?

Well, as far as the female thing goes, my theory is that women tend to write frugal blogs (which are usually really practical and home-related) and men tend to write personal finance blogs (which have some frugality, but also include topics like investing, mortgages, and debt-reduction strategies). As is the case with any rule, there are some exceptions, but I think that this is something of a pattern.

So, it’s not that women are writing about money and men aren’t….we just tend to do it differently.

As far as the religious thing goes, I would venture to guess that’s because a lot of Christian women share my conviction that God wants us to

If a whole pile of Christian women believe these things, then it would stand to reason that you would see this in our blogging.

I suppose that may explain why so many Christian women blog about this stuff, but it doesn’t really address why we seem to own the majority of this market (assuming that is the case…correct William and me if we are wrong!). I don’t really know why that is, because I know there are non-Christians in this world that live frugally and blog about it, like my friend The NonConsumer Advocate. And conversely, there are plenty of Christians who spend their money unwisely.

If you have any thoughts/theories on this topic, feel free to share! Do you find that most frugal blogs are written by religious (though I loathe that word) moms? If you do, why do you think that is?

I would agree with Kristen that some of the reason for the apparent lean in the direction of Christians writing frugality blogs is in the name. When it's called frugality, it seems to fall under the Christian value system. When it's called green, it seems to be very similar in terms of practice, but the motivation may appear to be more political. (Although for many, a love of the earth and desire to care for it IS their spirituality.) This is a great thread!

I am enjoying your blog - which I was referred to by a Jewish blogger on frugality! They are becoming more popular by the day. I think that people of faith of various denominations have some core shared values.

As a Bright non-Christian man, who actually does the frugal, homemaking thing, complete with canning, cooking, shopping for groceries, gardening, doing laundry, cleaning house with baking soda and vinegar (depending on the need), I think I can say that there are lots of good ideas to use, no matter your creed. It just so happens that people blog about what they are passionate about, and when someone is able to feed a family, and live a simple life by being frugal and thrifty, they wanna tell others how good they feel. And so the blogs grow. And another fact is there are lots of people who are devout in their faiths and share that too. I ignore the faith thing, and glean the tips, motivations and ideas where I can find them. And I don't hold someone's beliefs against them. ;-)

I think one of the reasons Christians tend to be concerned with frugality is several (not all, and by no means is this unique to Christians) have made a conscious decision to live below their means. This could be for several reasons: choosing a career in accordance to one's call or vocation that doesn't pay as highly as others might, being dedicated to supporting charities through their lives and not just their surplus, and/or being conscious of one's lifestyle and its impact on the environment. Historically, voluntary simplicity or poverty has been part of several Christians' practice.

Just found your blog and am loving looking around!

In this thread, have you read Crunchy Cons? It is an interesting study of a new movement of earth-conscious, simple living, homeschooling, organic food loving Christians. ;) It is a good one.

You are now one of my "Favorites."