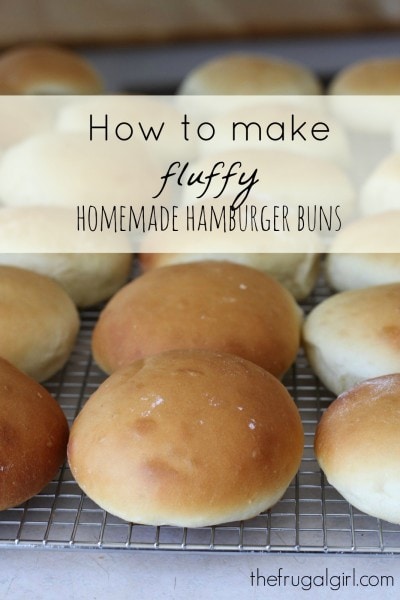 Several years ago, I posted a recipe for homemade hamburger buns, but of late, I’ve been slightly modifying the dough from my honey-glazed rolls to make buns because I think they’re slightly fluffier and more delicious.

In fact, these are so good, I might almost prefer one over a doughnut. 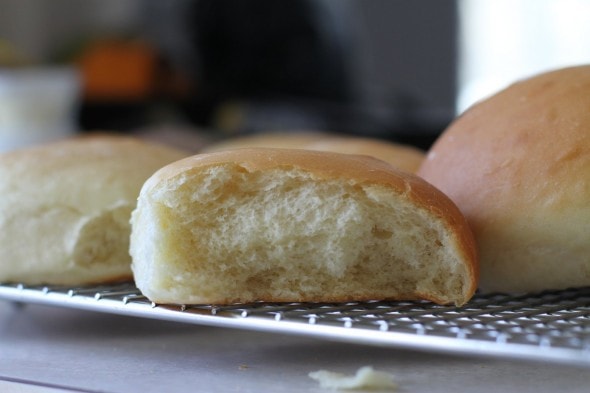 And they’re awfully good just toasted with butter and jam.

In fact, fresh from the oven, they’re delicious all by themselves!

This is all you’ll need.   It’s kind of surprising how little bread requires, isn’t it?? 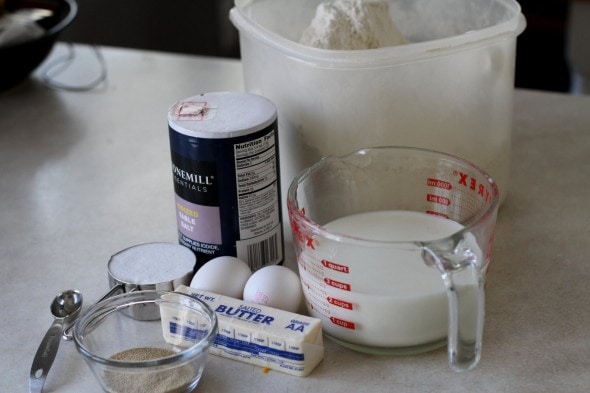 Just a few ingredients and somehow, they turn into a pile of buns.

This is why homemade bread can beat the price of even super-duper cheap bread. 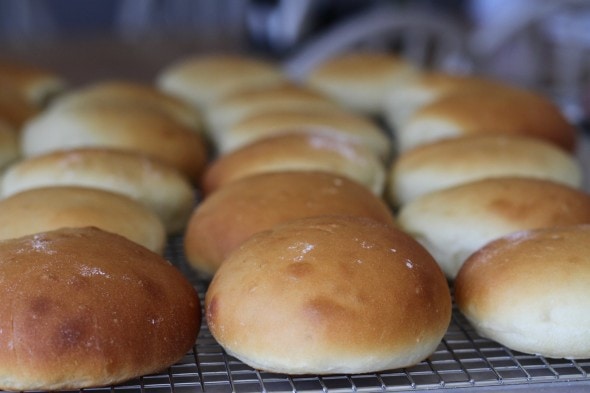 I’m going to give you a recipe for 24 buns, because while you’re at it, you might as well make a bunch. If you don’t eat them in a few days like we do, you can always freeze some for later.

Feel free to halve the recipe, though, if 24 buns is way too many for you!

So, in a mixer bowl, combine 3 cups of flour and two packages of yeast (that’s 4.5 teaspoons.) 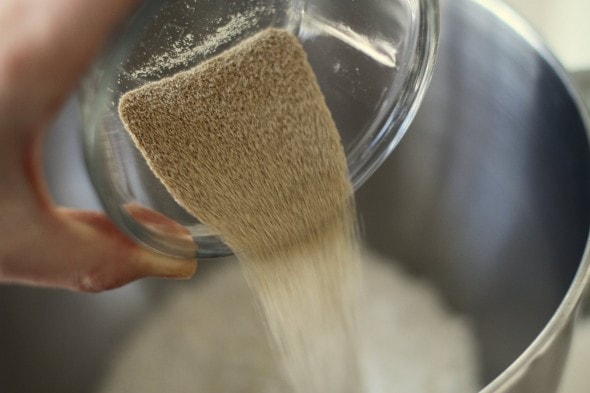 Then heat together your milk, fat, sweetener, and salt until it reaches 120 ° F.

You can use whatever kind of fat you prefer…butter is the tastiest, but vegetable oils work fine too (if you use coconut oil, use the refined kind so your buns don’t taste super tropical!).

You can also vary the sweetener. Sugar works, but so does honey. 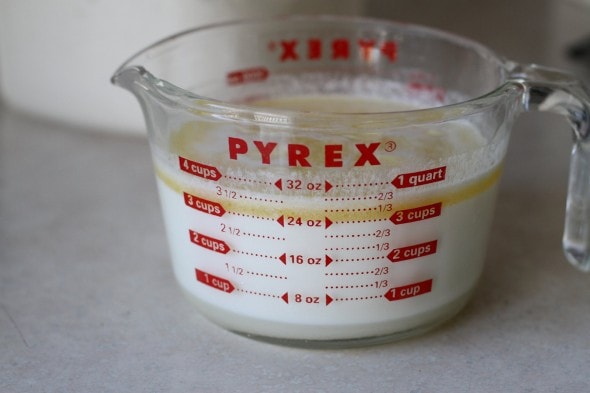 Add the hot liquids to the flour/yeast and beat for two minutes.   This will make a really thin batter. 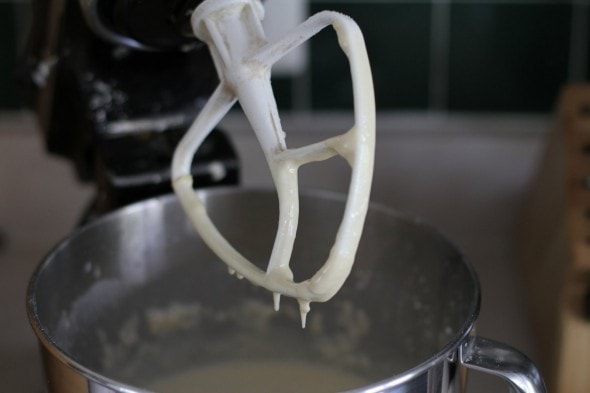 Next, add two eggs, and enough of the remaining flour to make a soft dough (the recipe calls for 7 cups total and at this point I’d added a little shy of six cups.) 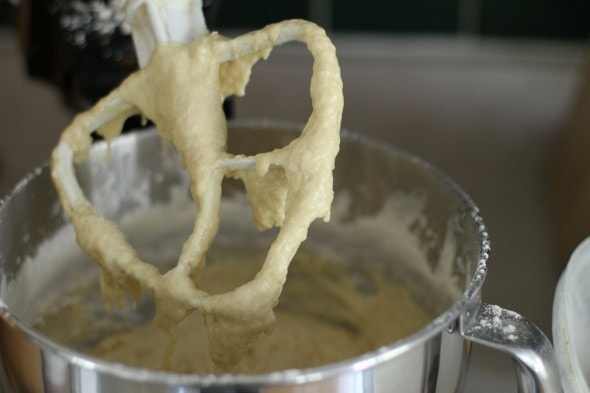 Don’t err on the side of adding too much flour-this is probably the most common mistake beginning bakers make.   Tough yeast dough won’t rise well because the yeast isn’t strong enough to push against really stiff dough.

Tough dough is the enemy of fluffiness.

Flour your counter and dump the dough out. 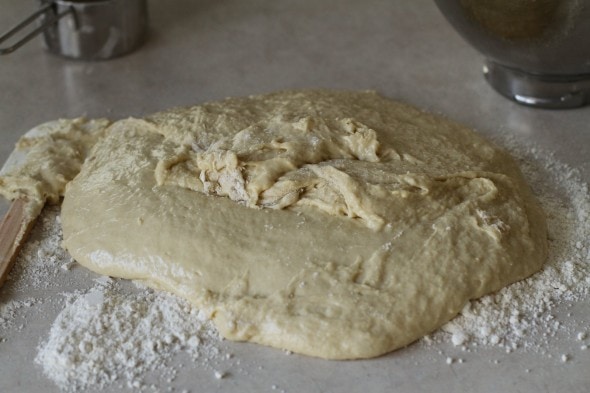 FYI, I could have made this dough a hair stiffer than I did.   If you’re new to kneading, you might want to add just a bit more flour than this before you knead or you’ll have difficulty handling the dough.

A bench knife/dough scraper makes the process way easier. Mine is almost exactly like this one, which sells for $5.99. 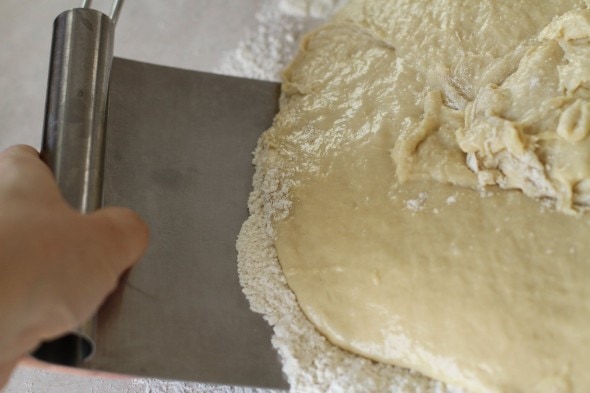 To start the kneading off, I run the dough scraper around the edge of the dough, folding the floury edges into the middle. 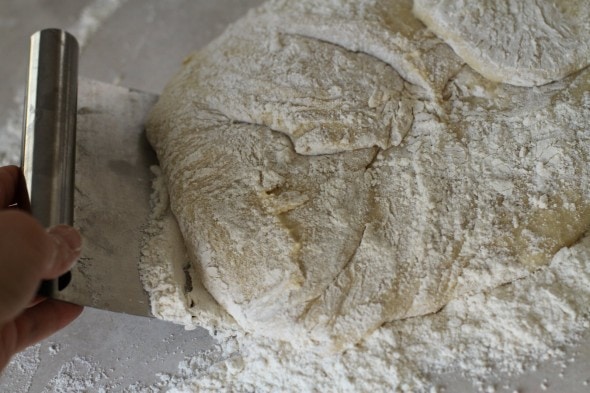 Once I do that, the dough is usually quite manageable.   I knead my dough for about three minutes or so, only adding flour to the underside/outside of the dough, never to the middle.

It should look something like this when you’re done.   See how it flattens out a bit?   Your dough should be soft enough to do that.   If it stays in a tall round ball, it’s too stiff. 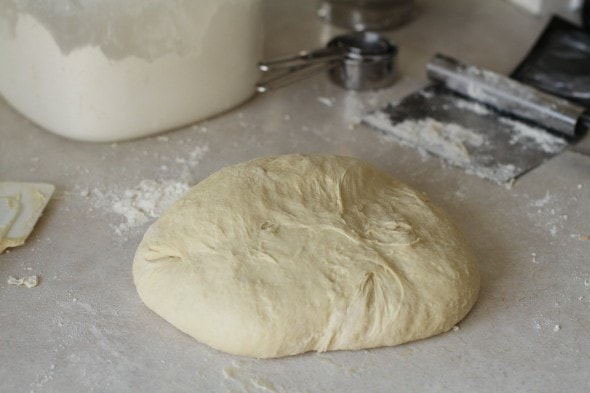 You should need right about 7 cups of flour, with a little extra for dusting the counter.   However, the amount of flour you need will depend a bit on the humidity levels in your home, so if you need to use a little more or a little less, don’t worry about it.   Yeast baking isn’t terribly exact when it comes to flour.

Put the dough back into the mixing bowl (I don’t bother washing mine!) and cover it with a wet tea towel. 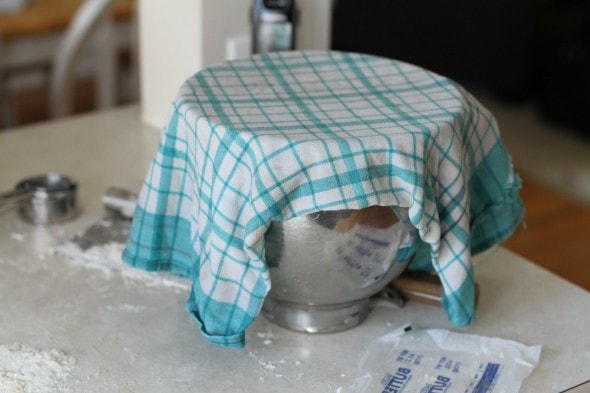 Let it rise in a warm place for an hour. 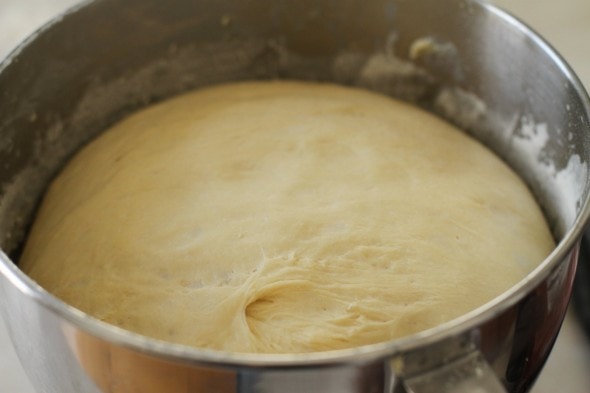 Once it’s risen, punch it down, turn it out onto the counter, and divide it into 24 pieces. 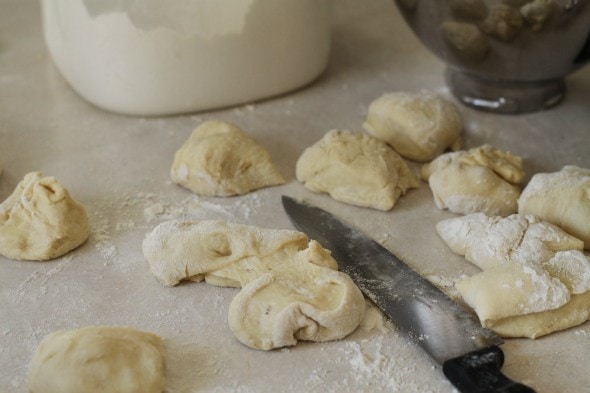 Shape each pieces into a ball, and then flatten the ball slightly.

To shape my dough into balls, I place a piece of dough in my hand and pull the outer edges to the middle.

You can sort of see how I did that if you look at the third dough piece in the picture below. 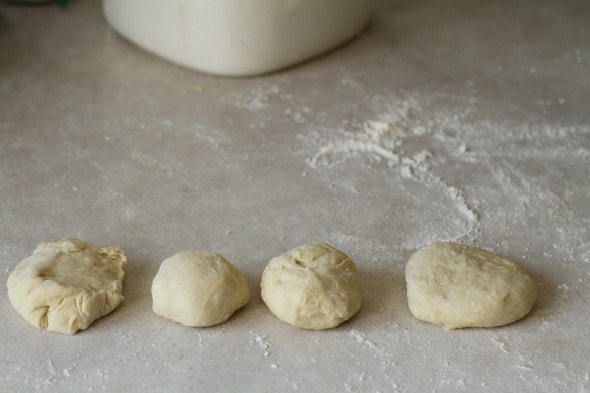 , and I totally dig them.   So incredibly sturdy.) 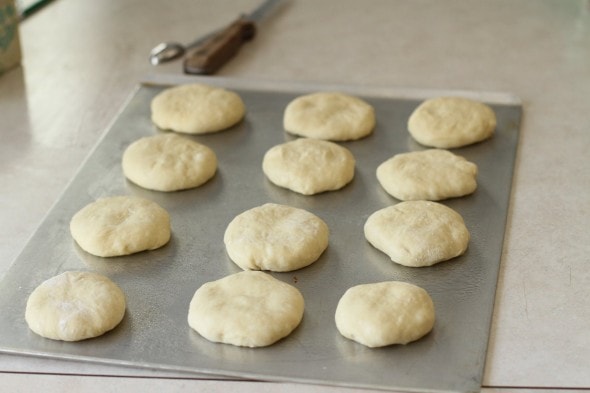 I do cover my dough with a towel in other circumstances, but sometimes, the towel can stick to small items like buns, so I like to put these into my oven, uncovered, with a bowl of steaming water below them.   This keeps the air warm and moist, which is the point of the tea towel anyway. 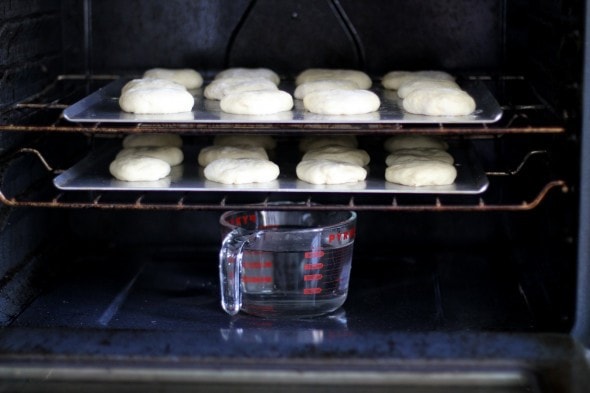 This also is a handy way to give your dough a warm place to rise during the winter, when the air in your house is a little on the cool side.

The buns will probably take about 45 minutes to rise, although if you’re making them in the summer, they could be done rising in as little as 30 minutes.   It all depends how warm the air is.

They should look like this when they’re done rising, though. 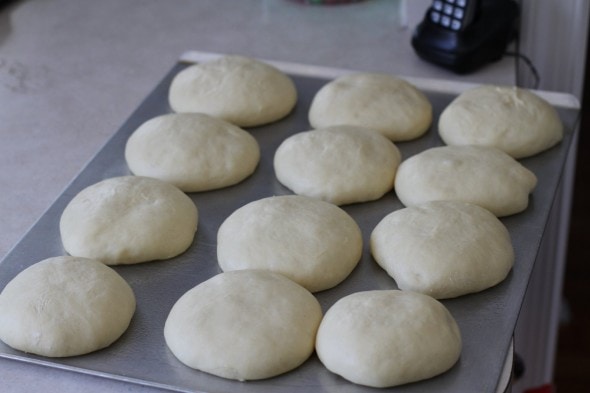 About 10 minutes before the buns are done rising (take them out of the oven first!!!), preheat your oven to 350 °F.   Once the oven is hot, bake the buns for 13-15 minutes, or until they’re nicely browned.

Remove them to a wire rack to cool.

On wire racks: I used to own two cheap and terrible racks, but I now own two of these Professional Cross Wire Cooling Racks

.   I love them because they should last forever and because they fit perfectly in my half-sheet pans. And the cross-hatch pattern of the wires means nothing can sag between them.

Here’s what the inside of a roll should look like…soft and fluffy.

In the bowl of a stand mixer, combine 3 cups of flour with the yeast.   In a separate bowl, combine milk, butter, sugar, and salt, and heat (stovetop or microwave) to 120 °F.

Turn dough out onto floured surface and knead for 3-5 minutes.   Place dough in bowl, cover with wet tea towel, and let rise in a warm place for one hour, or until doubled in size.

Turn dough out on to floured surface and divide into 24 pieces.   Shape each into a ball and flatten slightly.   Place on greased baking sheets; cover baking sheets or place into oven with a bowl of warm water below.   Let rise 30-60 minutes or until doubled in size.

Remove rising buns from the oven and preheat oven to 350 ° F.   Bake buns, one sheet at a time, for 13-15 minutes, or until lightly browned.   Remove from pans and cool on wire rack.

In a blizzard and wanted hamburgers tonight but had no buns! Tried this recipe and it is amazing….definitely a keeper. So easy to prepare and They are just like the pictures very light and airy…thanks for saving the day.

Oh yay! So glad to hear this worked well for you.

The only bun recipe I ever use.....YOURS. It is the best that I've found. Especially like the rising in the oven.

I'm so glad it's working out well for you!

Add an egg wash and sesame seeds and this recipe is golden. Messy, for sure, but light and fluffy. I cut them into 16 pieces, gives me 4 oz buns. Excellent

I make bread, a lot of bread. I have made hamburger buns but came upon your recipe on Pinterest. I will never use another recipe for hamburger buns again. They are incredible. Light and soft and delicious.

Hi Would it be possible to swap the milk for a non dairy milk and if so which type? Many thanks