Last spring/summer, the free furniture was pretty much pouring in(I got four dressers, three nightstands, two desks, a chair, a table, and a file cabinet from freecycle). Happily(because I was growing very weary of painting!) nothing came along in the fall. Recently, though, I got the nightstand for Zoe’s room, and I also got this little wooden chest. 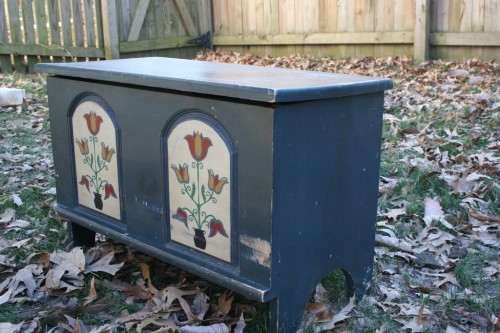 It’s been sanded and painted, but the broken wooden piece on the bottom still needs to be repaired(I need to ask my dad or my brother for some help with that), so no “after” pictures yet. I’m also hoping that my friend can paint some princesses on the two raised front sections. The chest is currently housing dress-up clothes(they were in a dilapidated cardboard box before), so I think two princesses would be lovely on the front of it.

In addition to the white nightstand and the chest, I’m also the proud owner of two nightstands(only one is pictured, but they’re identical). I’ve been looking for a match for this one for quite some time, but I was having absolutely no luck. However, when I was in Goodwill one day, I spied two matching nightstands for $20 apiece. They’re not exactly like the two dressers I painted for my room, but they have some similarities(the vertical grooves on each side are like the vertical grooves on the dressers). So, I brought my husband back that night to get his opinion, and he agreed that they would be fine.

I’m planning to take the gold lock pieces off(they’re fake locks anyways) and I’ll replace the gold handles with the same silver hardware that’s on my black dressers. I’ll have to do some drilling and filling(the current hardware has two screws and the new hardware only has one) before I paint them, but I think they’ll look really pretty when I’m done. I haven’t done any black painting for a while, and that will make this project fun. I’m getting bored of painting white furniture!

There are a number of 50 degree days forecast for this week, so maybe if I manage my time really well, I’ll have a pair of black wooden nightstands by the weekend.

loved your easy instructions for painting a desk.

great job! I love anything painted.

I was just about to post my solid maple drop leaf dining table on freecycle. BUT I thought I could paint and resell, I need the money and I love to do this kind of stuff. I like the type of paint you use. So thanks for the inspiration!!!

I love painted furniture but always worry about chipping. I should have sanded and stained my old cupbaords it the kitchen instead of painting them aso now I am always retouching them. The same with my baseboards and trim in my old home. I try to keep them clean but I notice that they have been chipped. I guess removing the paint is a long hard job and since I have fibromyalgia and arthritis it is hard on me. Any suggestions?

You do an excellent job of painiting wood furniture, have you tried different colors, that would seem so exciting. I reignited my love of thrifting and saw some good finds, so i can't wait to start. It frustrates me how furniture stores are using cheap materials and charging an arm and a leg for DESIGN only; they just don't make furniture the same.