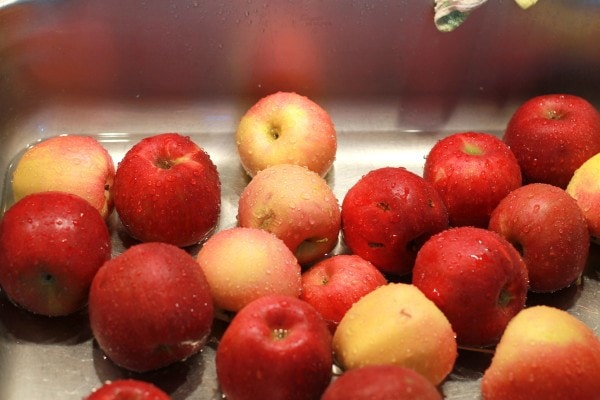 I cut up apples and put them in a pot with a few cups of water. 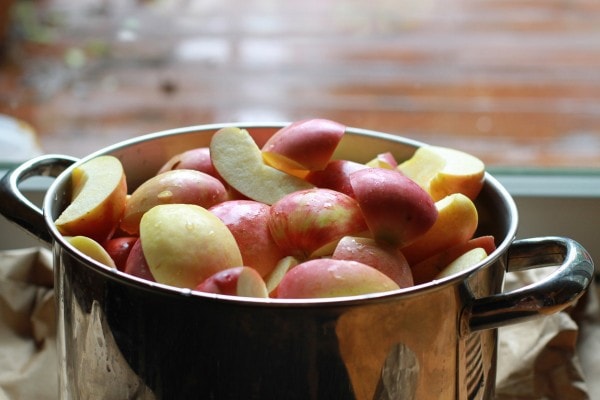 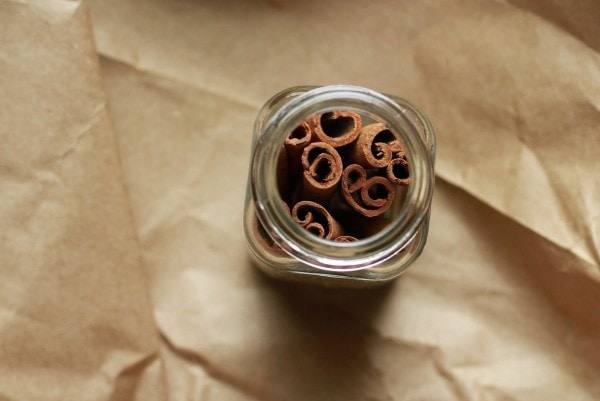 I cooked the apples until they were soft. 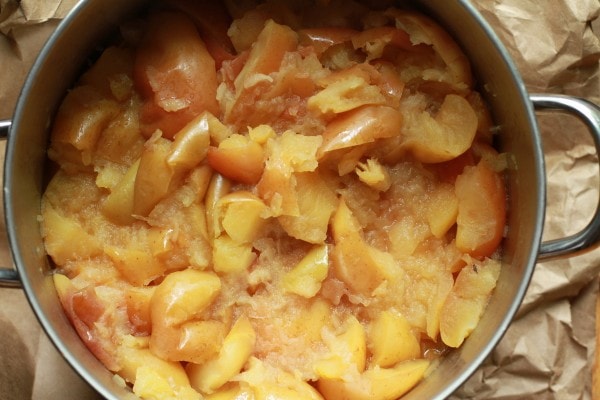 And then I ran them through my mom’s most fabulous food mill. 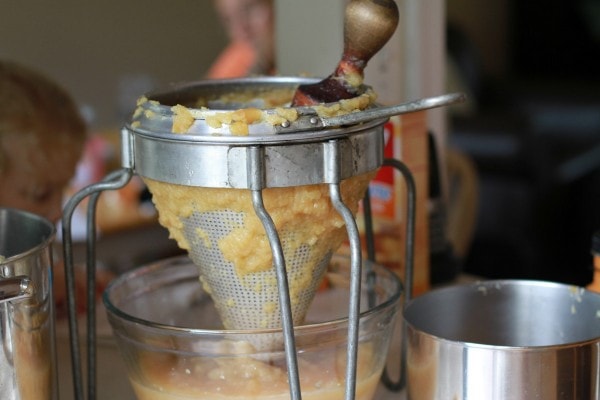 This pushes the cooked apple out, leaving only the peels. So, so, so much easier than peeling all the apples before cooking them. And this food mill requires no electricity…just arm power.

I know I saw one like this in a catalog a while back, but I can’t remember the name of the catalog. It was a thick one that sold all sorts of self-reliant, old fashioned kind of products. Anyone?

I checked to see what Cook’s Illustrated had to say, and they recommend this Cuisipro Deluxe Food Mill

. So, if you don’t happen to have a mom who owns a food mill, you’re not without hope. 😉

Since my apples were sweet, I didn’t add any sugar to my sauce. It’s 100% apples. 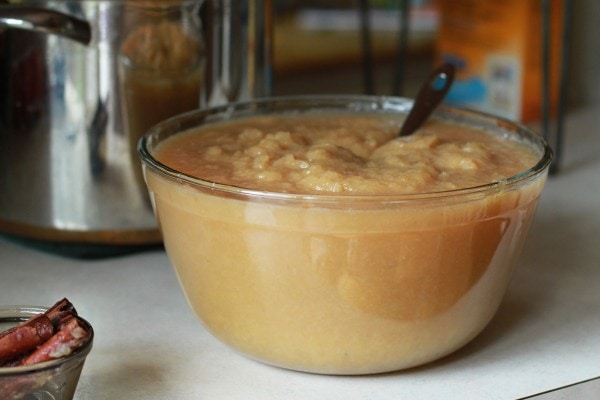 I put some of my applesauce in jars. 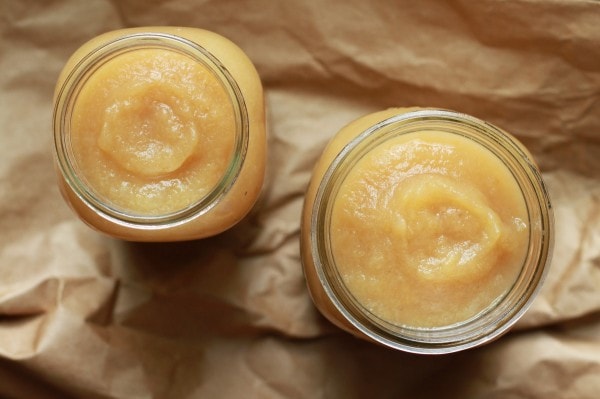 But since I canned so many tomatoes this summer, I didn’t have enough jars to hold all my applesauce. That wasn’t a big deal, though, because I was planning to just freeze my sauce anyway, so I used some regular glass and plastic containers for the rest of the sauce.

Here’s my haul from a half bushel of apples, plus some that I picked up from the neighbor’s apple tree (no one is living there right now, so they’re free for the taking.) 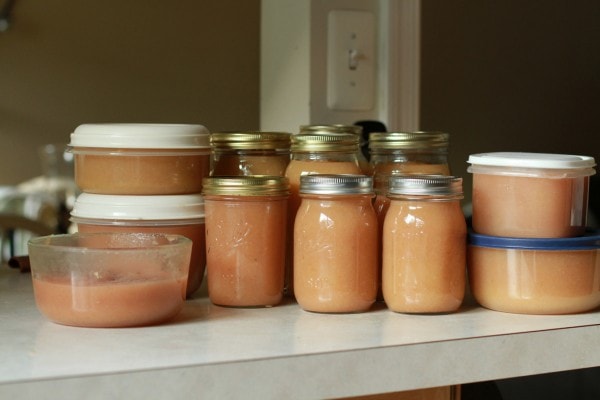 Since I had to buy most of the apples, I’m not positive that my applesauce has saved me money (whereas my canned tomatoes, made with free tomatoes, were definitely frugal).

I think I paid $22 for the apples, and I’m pretty sure it wouldn’t cost me $22 to buy this much applesauce at the store.

But, I actually don’t make applesauce to save money.

I make it because I grew up eating homemade applesauce, and to me, the stuff from the store seems tasteless, runny, and way, way too sweet. I’d prefer to eat no applesauce at all than to eat that, actually.

I am an applesauce snob.

Plus, as you all know, I’m trying to buy and eat more local food, and since the apples are from PA and from my neighbor’s yard, I consider them to be quite local.

Also, this applesauce is of higher quality than the store-bought stuff. Mine contains nothing but apples…it’s not watered down and it has no corn syrup.

And the only trash produced by this applesauce comes in the form of two paper bags, which can be recycled or composted. The containers are all reusable, and even the lids for my jars are reused (since I’m freezing the applesauce, I used lids that were previously used to seal jars, just like I do when I make yogurt.)

So, for all those reasons, I don’t even care if this applesauce isn’t frugal. For me, it’s a worthy investment of time and money.

Have you ever eaten or made homemade applesauce? Tell me I’m not the only snob out there! 🙂

Hi Kristen, I love your post about applesauce. We just got home from a little trip to the mountains and had fun visiting apple orchards. The apples at the orchards were a little expensive but we had better luck at a farm market in Stuarts Draft, Va. My half bushel of Granny Smith Apples was $15.00. I just finished making applesauce and because of the tartness of the apples, I did add a little sugar. I used my OXO food mill that works like a charm. Instead of water, I add organic unfiltered apple juice from Trader Joe's. I also freeze mine with reused canning lids and glass jars. I definitely agree with you about homemade tasting the best! God bless! Nancy

I am an applesauce snob, created 3 applesauce snobs, and now have 4 snob grandchildren. But the best gift my husband ever gave me was a Victorio Strainer. It is hand cranked and I can do 4 bushel of apples in a day. The yield is fantastic.

I make applesauce in my Instant Pot occasionally. Mine is way better than store bought too.

Cut apples into 2-inch chunks. Discard the core, stem and seeds. Do not peel. Place in Instant Pot along with 1 scant cup of water. Close Instant Pot lid and set to manual high pressure (HP) for 8 minutes. Be sure the steam vent is sealed. The Instant Pot will take about 8 minutes to reach high pressure, then will cook for 8 minutes. Once the timer goes off, let sit for about 2-3 minutes. Turn steam vent to release pressure. Once all steam has dissipated, open the lid. Remove excess water if there is any. Stir - I like mine lumpy (Use an electric mixer or immersion blender to smooth out applesauce to the consistency you prefer. You may prefer it smooth.) Add cinnamon powder (OR 1-2 drops of cinnamon oil)

Let cool or place in the refrigerator to cool down.

Funny thing, Kristen! We are living in our motor home in Canada and watching the snow being driven sideways yesterday? Not a happy time! I had used the slow cooker to make soup yesterday so it was easy to peel, core and dice up a bag of Granny Smith apples. First, I put 2 Tbsp of my Apple Pie Spice in the bottom (this is home made seasoning). Then I added 1/3 cup of lemon juice plus 3/4 cup of filtered water. The slow cooker had been turned to high at that point. We added the diced apples, then gave it a good stir to coat all the apple pieces. It cooked for 45 minutes, then turned off the power. Once it had cooled, we mashed the apple sauce, decanted into 2 small bowls as part of our lunch, with the rest going into pint jars. It will only take a few days to finish our apple sauce as we both grew up with it too. Hope you are all safe, happy and healthy!

Ooh, I hope the snow disappears for you guys soon! Fresh applesauce is good for a snow day, though.

Kristen, have you ever tried making your apple sauce using your Vita Mix? It virtually liquidizes everything. After you run apples thru it there is no sign of any peel or seeds! So you not only save the effort of squeezing the apples through the mill, you get more apple sauce, and you get all the good stuff that is in the apple seeds and the apple peel!!! You could try a small batch and see how you like it.

OH wow, even the seeds?