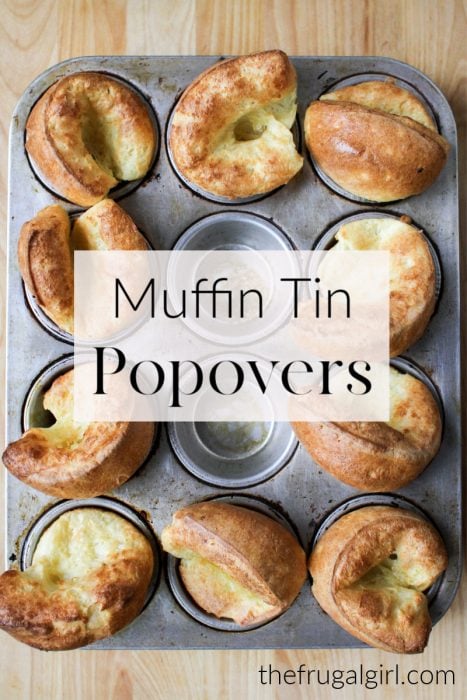 2020 edit: I tried this recipe in a nonstick muffin tin, and my popovers did not rise properly at all. I’m thinking maybe this works best in a traditional tin vs. a nonstick tin!

Oddly enough, until a few years ago, I’d never had a popover, despite having seen them in cookbooks for years.

One night I decided to give them a try, to serve with soup, and as it turns out, my family really likes popovers. 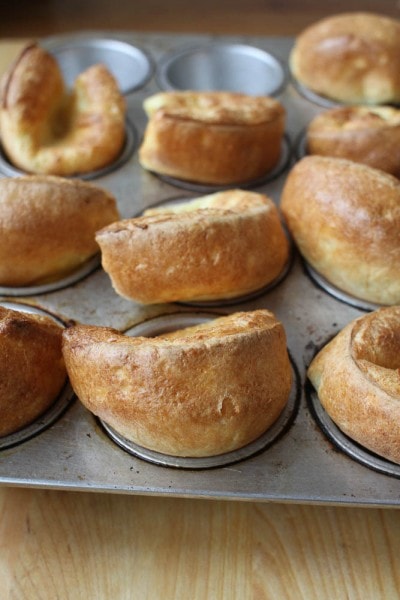 When I posted a photo of these on Instagram (I’m thefrugalgirl over there), there was some discussion about whether the popovers are the same as Yorkshire puddings, and from what I read on the internet, they are, at least, very similar.

Except that we never eat our popovers with gravy/meat.  We put butter and sometimes honey on them.

At any rate, every American cookbook I’ve ever seen refers to these as popovers, so for the purposes of this blog, popovers they will be. 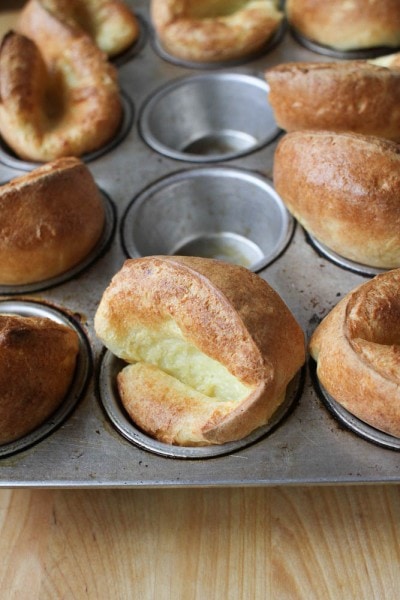 You can buy a dedicated popover pan, but since my kitchen isn’t particularly enormous, I really, really try not to have unitasker pans.

So I’ve always made my popovers in a muffin tin and it works out just fine.

Almost every popover recipe I’ve ever seen has exactly the same egg/milk/flour proportions; the only differences are in the greasing/baking methods.  I opt for the pan prep method recommended by Cook’s Illustrated in their Baking Illustrated book.

Basically, instead of greasing the pan, you put oil into the muffin cups and then heat the pan before adding the batter.

(Sort of similar to the way you make Apple Pfannekuchen.  Or a Dutch Baby.) 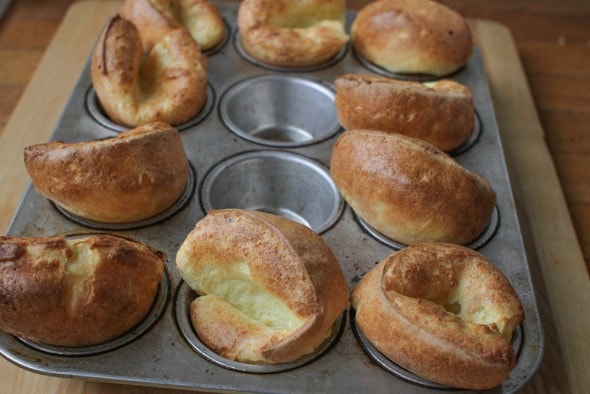 To start, grab a muffin tin and place 1/4 teaspoon oil into the 10 outer cups, leaving the middle two empty. 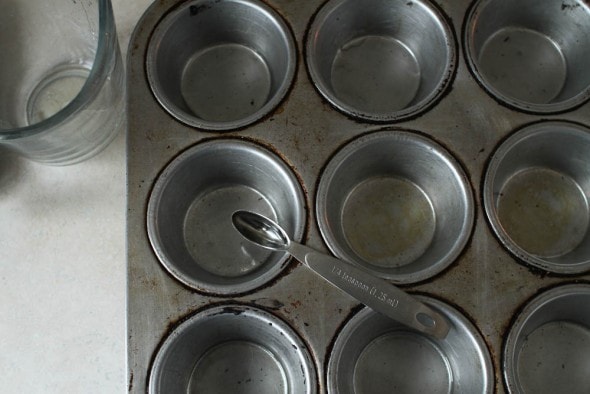 Place the pan into the oven and heat it to 400 ° F.  While the pan heats, make the batter.

Whisk two eggs, and whisk in the milk. 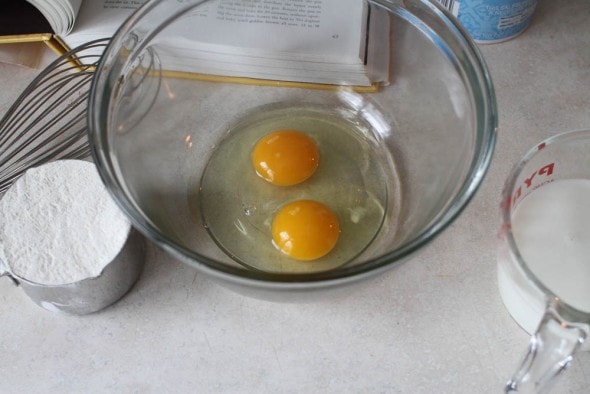 Next, whisk in the flour and salt. 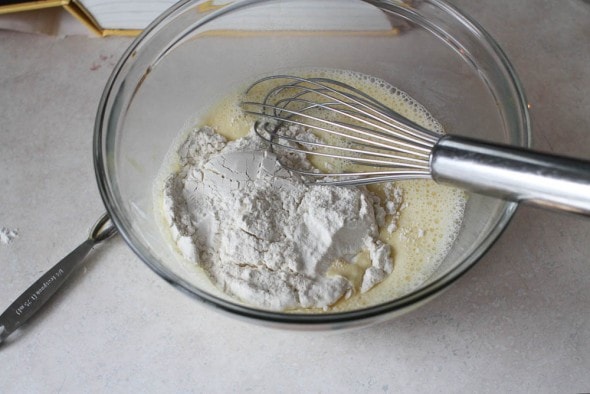 And then whisk in the melted butter. 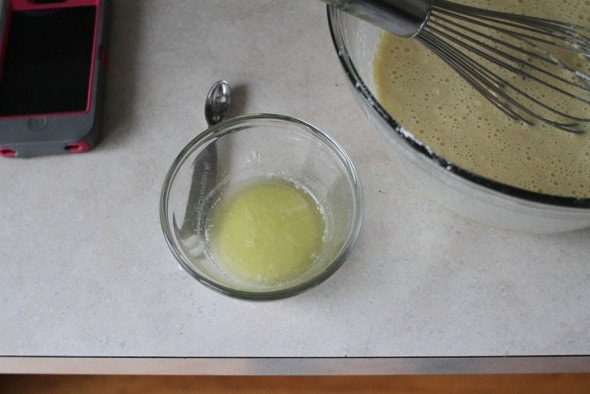 The order of these steps vary in recipes, but I’m not sure it matters a whole lot, honestly.

Pour the batter into a measuring cup so that it’ll be simple to fill the muffin cups. 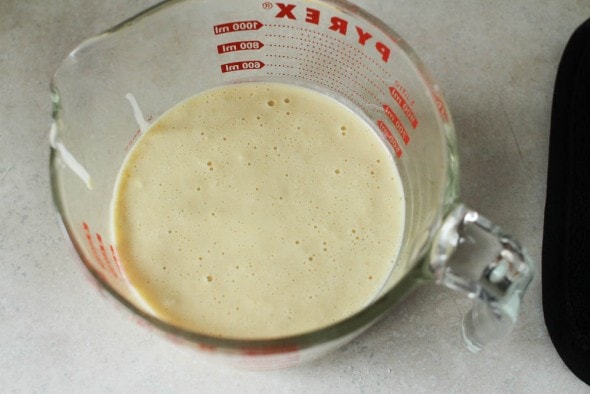 By now, the pan should be piping hot, so carefully take it out of the oven and evenly pour the batter into the 10 greased cups. 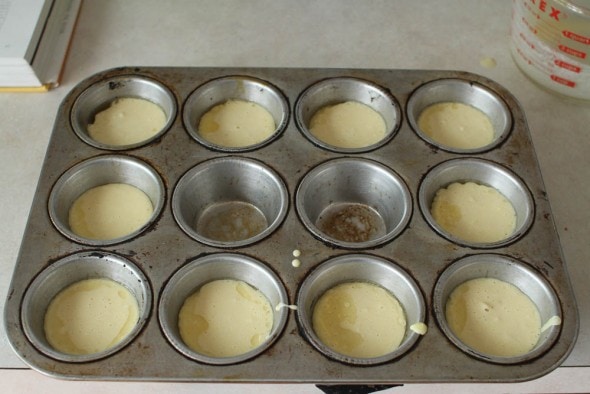 Place the pan back into the oven (Don’t forget to use potholders! The pan is super hot.) and bake for 30-40 minutes.

Do NOT open the oven door during the baking process.  Opening the oven door causes eggy things like popovers, Dutch babies, and souffles to fall.

During the baking process, the popovers should sort of slide up into a puffy, lopsided shape, and they’ll end up being far larger than you’d think they could possibly be. 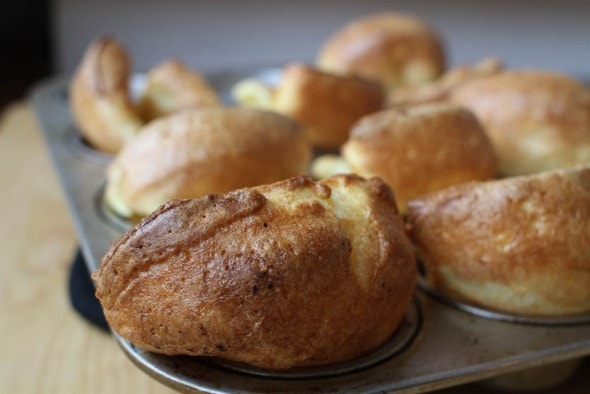 Remove them from the pan right away. Just use a butter knife to help get them out of the pan if they stick a bit.

Serve them while they’re still hot, because they’re awfully delicious that way and also because then the butter you put on them will melt.

Oh, one last thing!  One of the recipes I’ve tried in the last few years called for half whole wheat flour, and the whole wheat was surprisingly not-noticeable.  So, go for it!

Don't open the oven door while these are baking, or they may fall.

Any tips for people who live in high altitudes? I’m in AZ at mile high altitude. I love it except for baking!! As an English girl born and bred (well, not so much of a girl anymore!) I’ve had terrible luck trying to make Yorkshire pudding to go with our Sunday lunch since living here. It becomes flat and heavy (dreadful) instead of light and fluffy like my lovely mum used to make. I will try your popovers though, and let you know how they turn out. Thanks!

Oh man, I have no idea about adjusting for high altitude! If you figure it out, do come back and comment to tell us all.

Popovers are so yummy and nobody ever knows what I am talking about when I say their name. My father made these all the time. He was from old Britain so he knew the Absolute secret of them. Yorkshire Pudding is made with beef drippings. That's why they are lower and more dense. I love popevers because they are a bit rich but oh so fluffy. I was taught that the milk, flour and eggs are kept equal. 2-2-2 or 3-3-3 if it's a bigger batch. Also, it's essential to blend it in a blender for 2 mins. That's the secret to get them super high and fluffy. And, of course, heating the pan first. Non stick pans do work great, that's how we always made them. Next time I make them I will take a pic! The are enormous!

Hi, sorry to have to say, but the temperature for my popovers was far too low; the last ones l made were 450 F for first 15 minutes, 400 for next 15 minutes and they really popped...these ones look like muffins and not like popovers, a bit disappointing, hmmm...

Perfection! I may be repeating myself here, but these work like a charm. Preheat your oven properly (at least 30 min) .. and a muffin pan works great! (I use USA brand) Outstanding finish - thank you!

Do you put one quarter tablespoon of oil in EACH of the muffin cups? That part wasn't clear to me.

It's a quarter teaspoon, actually, and yep, it goes in each of the muffin tins that you will be filling with batter.