A number of you have asked about this over the 2.5 year course of this blog, so I thought a post on the topic was more than in order. 😉

This is my cell phone. 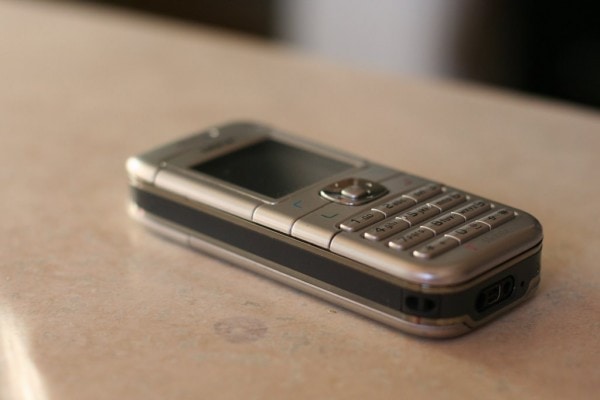 I think it cost $20 (it might have even been free after a rebate), and the only service it has is pre-paid minutes from T-Mobile.

My phone doesn’t text or have internet. It doesn’t take pictures (I have a few other devices that take care of that pretty well!) or video. It doesn’t have a touch screen. I don’t even think it has any games on it.

Know what else my phone doesn’t have?

But you know what it does have?

The ability to take and receive calls.

Which is, after all, what a phone is supposed to do.

I know this sort of cell phone plan wouldn’t work for a lot of people, but for me, it does. I hardly ever use my cell phone, so my pre-paid minutes last me forever. I keep mine turned off most of the time and only turn it on when I need to use it (like when I am out and Mr. FG is at home with the kids and I need to ask him a question).

I’m home most of the time, so my home phone is available to me, and if I’m out and about, I figure that it is not the end of the world if someone has to wait a few hours to get ahold of me. People used to manage with nothing but a home phone (and before that, with no phone!), so I figure that I do not need to be available at the touch of a button all the time.

My cell phone costs me less than $100/year in prepaid minutes, so I’m paying about $8/month for my cell phone. This is definitely cheaper than any cell phone contract I could ever hope to have.

But frugality is not the only reason I have resisted the upgrade to a smartphone.

No, the main reason I don’t want a smartphone is that I don’t think I could handle the temptation. I have enough trouble resisting the call of the computer and the laptop and if I had the internet available to me at all times, I think I would use it way too much.

I don’t want to become one of those people who is attached at the hip to their phone.

I don’t want to be walking down the sidewalk, texting away.

I don’t want to be sitting at the dinner table, checking my email.

I don’t want to be at the park with my kids, reading my Facebook feed.

I don’t want to be one of those people who is busy texting while you’re trying to talk to me in person (I hate that so much!).

I don’t want to be one of those people who is always answering the phone or glancing at the phone in the midst of a real-life conversation.

When I am not doing a computer-related task, I want to be present, not just in body, but in mind too. And I don’t think I’d have the self-control to do that if I had a SmartPhone.

Because of that, even if I could get rid of my home phone and save money by just having a cell phone (that’s not the case at this point in time), I don’t think I would. I’m pretty sure that my quality of life would suffer instead of being improved and I’m very certain that my mothering and wifing would take a hit.

That’s how I do (and don’t do) cell phones. I know that cell phones and SmartPhones are helpful or even necessary for some people, and I know that some people do use them responsibly, but I know myself well enough to know that a fancy-schmancy cell phone is not a wise choice for me.

Today’s 365 post: Normally we don’t eat in the living room…

I recall my first cell phone and service with Sprint. What nonsense paying literally hundreds of dollars ($300 range) per month because I couldn't add those minutes used. I also got the monthly warranty for our family phones which hiked our bill even more, and we were on two consecutive two-year contracts.

We switched to MetroPCS's $40 per month plan and flashed our Sprint phones over. When those phones burned out, we bought new, CHEAP phones from Metro and changed our service to $25 a month per phone. I like how Metro doesn't add in taxes and surcharges so that the amount varies month to month. It's straightforward...$25 per month for unlimited talk and text.

I imagine as technology advances and more options become available, the basics will keep getting cheaper. I still want talk/text, but for even less than $25.

I love this! Thank goodness there are some of us out there that want to have real face to face interaction, when possible. I get discussed when I see a family out to dine and they are all talking to others on their phones. It is a picture that would make my grandmother roll over in her grave. All this stuff should be suppliments to normal old fashion conversation not in place of it. Only when you can't be face to face. I have a little thing I do to save money too. I have my electronics all plugged into the strips and I shut them off at night. There is always some power going to these devices. So when you plug them into a strip there is only one still coming to the strip instead of all of them. This works great for low energy items that don't run all at the same time like the DVD, WII, VCR anything that is just a pain to keep plugging and unplugging. DVR's don't like this. They have to reset and get messed up. So my TV and these other things are on one strip and when I am gone all day or over night I shut the whole thing off. I do the same with the PC router, modem and printer. What sevice lets you roll over minutes on a prepay? Is that T-mobile?

We don't have a landline or smartphones (and my husband's phone looks a lot like yours). I'm planning on upgrading at some point (when I can master a few other frugal habits to account for the change in cost...we're contract free as well). I need a calendar that follows me where ever I am (not a big fat paper one) and I'd love a GPS when I'm getting lost somewhere with the kids...not to mention the coupon apps I'd use! I agree completely on the temption to constantly check it though... I'll be in a big fight with myself over that.

Echo, echo, echo. I love all your reasons for why you don't need a smartphone.

My pals sit around using their iPhones during MOPS, of all places, where you go to have conversation and time with other moms, but they still can't. put. the. phone. down. Sad, really.

Virgin Mobile FTW. I've been using them for almost a decade now. The plan I used to have was like 1000 texts/$10 which I only used half. I couldn't always answer phone calls at work, so it was useful. Years with that plan, and five phones later, and now on their OptimusV...and..well I don't like it because the battery life feels like a fraction of my previous LG Rumor Touch was. I have to charge the phone everyday, and that's just lame and inconvenient. I might go back to using a plain phone :/