This is a guest post (the first ever on The Frugal Girl!) by my friend Katy, who writes The Non-Consumer Advocate.

She and many others are part of a group called The Compact, whose members pledge to buy nothing new (with some exceptions like food, undies, light bulbs, and the like).

My recent forays into Goodwill shopping were inspired mostly by Katy’s example, and though I’m not an official Compacter, she and I are frugal kindred spirits.

In fact, several times we’ve written about the same topic on the same day without any coordination on our parts.

I might even think we were twins separated at birth were it not for Katy’s devotion to all things sci-fi, a genre which holds not even the slightest bit of attraction for me (sorry to all you Star Wars/Star Trek/Zombie fans out there!).

I hope you enjoy her post. I promise there is nothing sci-fi about it. 😉 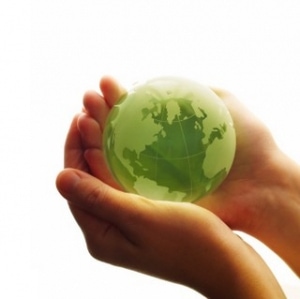 Retailers would have you believe green living is all about organically grown hemp sheets and sustainably harvested bamboo living room sets.

The best green purchase you can make is the one not taken.

Every time you purchase a brand new product you make a dent in the environment. Even when you’re making a green choice. That product had to be produced by materials that had to be shipped to the point of manufacturing. They were then shipped to the place of purchase, to be taken home by you, the consumer.

If there’s something you feel you just can’t live without, consider buying it used. Whether it be a book, clothing, appliance, toy or gift. Most anything can be found used.

A second-hand regular item is better for the environment than a brand-new green product.

It’s already manufactured, the damage has already been done.

I’m part of a worldwide non-consumer group called The Compact. (Buy nothing new.) Since joining in January 2007, I’ve only bought a few new items here and there. I went into it thinking I would try it for a month, but I doubt I’ll ever stop.

The things I thought would be difficult, (gifts, family acceptance) have been a cinch. Really, a non-issue.

Not only do I feel good that my possessions did not have to be manufactured specifically for me, I’ve also saved a ton of money!

So next time you’re about to buy a brand-new product, pause a moment to think whether it could be found used.

Or maybe even not bought at all.

Agree? Disagree? Tell us about it in the comments section below.

Battra, I think they just mean that in a green sense, not in an overall sense. It's just a way of saying that buying tons of "green" stuff is not the best way to be green.

I think that my camera and lens were a really good purchase, and they have enriched my life greatly. Ditto for my piano purchase. I think the point is that you shouldn't run around buying new green stuff and then congratulate yourself for being so green.

Frugal Doogal : The best purchase is no purchase.

Yes and no. There are times when I feel my life is made better by a purchase. It's rare but I'm not a freegan or anything so I recognize that most of us do need some things in our lives.

Wow Katy- the best purchase is no purchase- I love that. Lately my thrift mart has been having these super tempting half off sales very frequently. I'm going to remember this next time I am tempted to run down just to take a quick look!

Frugal Doogal : The best purchase is no purchase.

I agree completely. I'll have to look more into the Compact. After reading Katy's blog for a while, I might need to take it for a spin.

The best purchase is no purchase.