So. Life was a little bit less crazy at my house this week and I AM SO GRATIFIED.

(Pardon the caps yelling there.)

I’ve even had some days where I got to stay home for a large portion of the day, which makes this homebody a happy camper.

I spent a bit of my time going through my fridge, where I found some things that were pretty old.   The sweet potatoes probably were bad a week or so ago, but I just missed them, I guess. 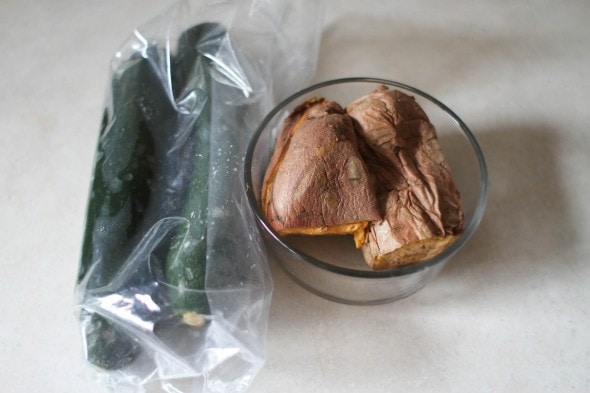 I thought the zucchini were going to be ok, but they were speckled with small moldy spots.

In other bad news, I discovered some rotten potatoes in a fridge drawer.   I was making potato wedges a while ago, and I’d sliced and parcooked too many.

So, I thought I was being brilliant by setting some aside to cook for breakfast (freshly cooked would be better than leftover!) 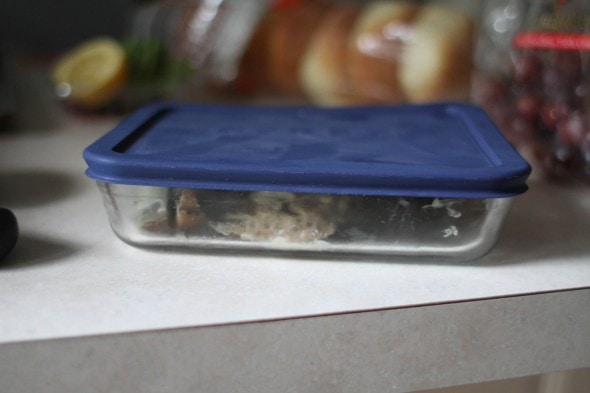 Except I completely forgot about them, mainly because they were out of sight.

Though I’ve gotten better at this over the years, my perennial problem is forgetting about food.   In this case, I should have turned the glass container upside down so I could see more than just an opaque lid.

How about some happier news??

I made a batch of banana chocolate chip muffins to rescue three very dark bananas. 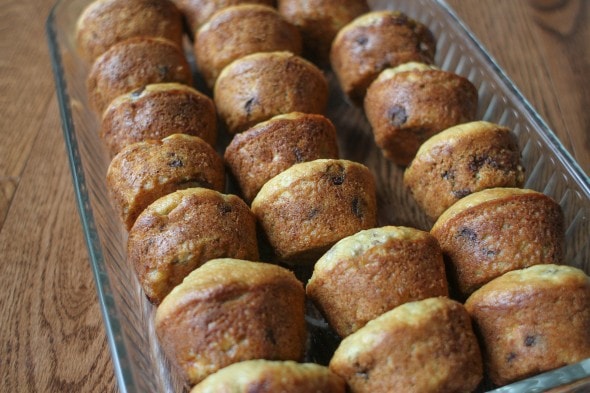 And I cut up and set out a cucumber, the last of some grapes, and some honeydew melon.

Because if these things are on the counter in an open container, they’re quite likely to get eaten over the course of an afternoon. 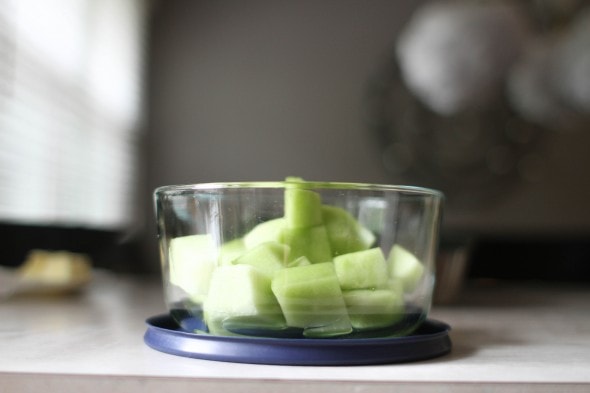 I also made a small batch of rice pudding with some dry leftover rice from a date night with Mr. FG. 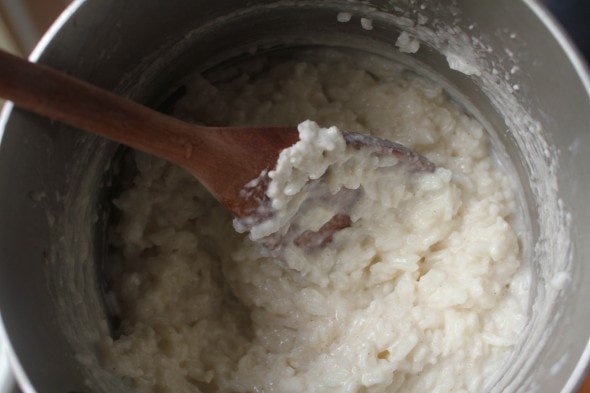 An unidentified family member poured a cup of milk and didn’t finish it.   Since I had no idea whose it was, I put the cup in the fridge and used the milk when I made some fluffy hamburger buns yesterday. 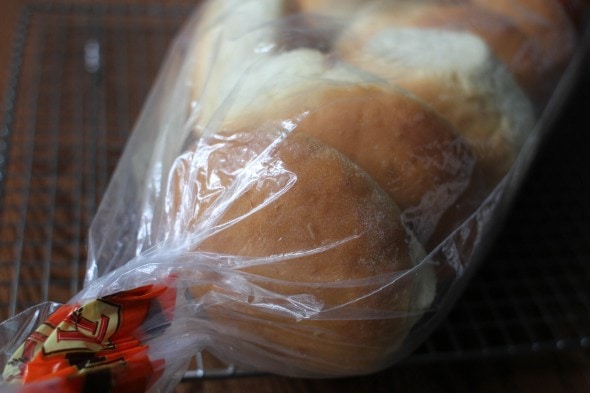 I know some people would shudder at the thought, but no one here is sick with any sort of infectious disease, and besides, the bun ingredients get cooked at high temperatures.   So, all is well.

On the topic of buns…I had Joshua film a quick instagram video of me shaping the hamburger buns since the shaping technique is a little bit hard to describe with words.

(You should be able to view the video with that link even if you don’t have instagram.)

Oh, and speaking of Instagram, I posted a photo of my produce box leeks there this week, asking for advice.   Several people mentioned leek potato soup, so I looked up a Cook’s Illustrated recipe, and it was really good! 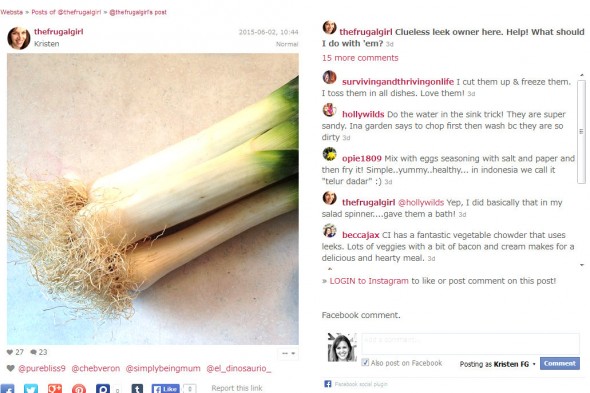 (Though I’m noting that I need to wash the leeks even MORE thoroughly than I did, because I detect a bit of sandiness in an occasional bite of soup.   I’m a little surprised because I thought I was being super thorough with the washing.   Live and learn!) 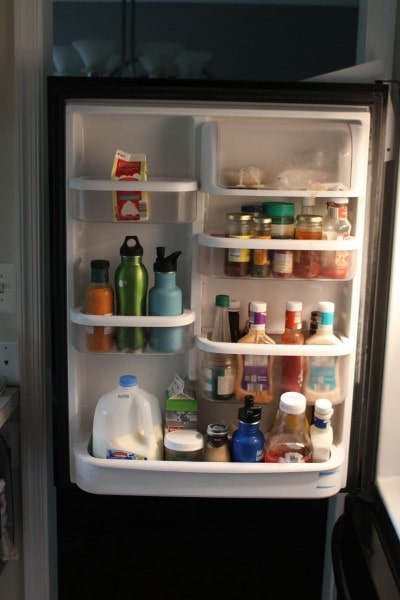 And the fridge itself: 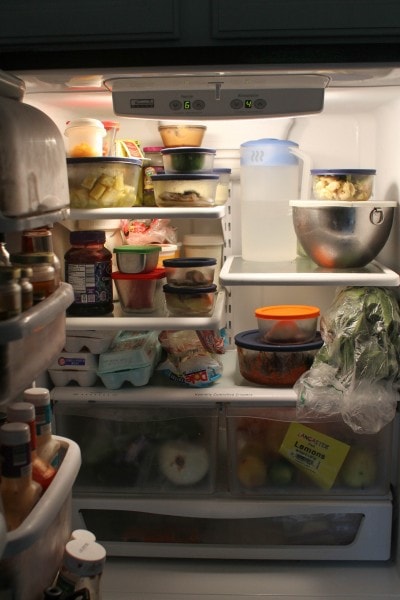 I’m noting that I have many smallish containers of odds and ends.   Nothing in them is bad right now, but having that many bits and pieces makes me nervous…too many food waste possibilities!

So, I’m gonna work on using those up today.

Oh, and here’s my freezer.

Not a lot has changed there, for better or for worse, which is good, I guess!

How are things food-waste-wise at your house this week?   Dish in the comments!

(Also, leek-washing advice is welcomed.   I rinsed em, then chopped them and soaked them in a salad spinner bowl of water, and then spun them dry.   Should I maybe have done the soaking twice?)

I had a few surprises when I cleaned out my produce drawer. There were some really slimy green onions, a slimy partial bunch of cilantro, and half a head of cabbage that was moldy. I also had some bad spots on my broccoli, but I was able to cut those off and use the rest of it. I had some English muffins that were moldy two days after I bought them. I was pretty disappointed in that so I contacted their customer service and I have some good coupons for English muffins now.

Well it's been a rough go over here with food waste. We are on the Dave Ramsey plan to pay off our truck and other debt and have almost entirely cut out restaurants. This caused us to over purchase the first few weeks for fear of not having food I guess. We are slowly learning the proper amounts of food.

This week we lost 1/4 of an avocado, 3 servings of turkey noodle soup, and 2 hot dogs. I thought we had frozen the hot dogs in time, but when we pulled them out they looked questionable (had greenish spots). I was able to put some of it in vermicomposting so I guess it's not a total loss

ATK has a fantastic recipe for a Leek Gallette. It's really pretty easy since it's a rustic tart (more like a pizza than a pie). When I made it last time, I used the dark green as well as the white parts, and subbed goat cheese for Gorgonzola. Oh, you also don't have to get expensive shiitake mushrooms - it works just fine with the cheaper ones.

Leeks sauted in butter make the best base for pureed butternut squash soup. They are delicious in a frittata. They make me actually want to cook and eat succotash.

I rinse them in the salad spinner until the water is clear. I generally freeze the tops to season broth or a pot of beans.

I have two jars of soup to throw out. This one makes me sad. I made lentil soup, but it upset the sensitive tummies of two of my family members so we just didn't get back to it.

I love leeks, but cleaning them is so tedious! The recipes I've made usually call for thinly sliced rings, so I just slice them while still dirty and drop them in water, separating all of the layers of the rings (the tedious part) and swish them around a lot. Then I drain them into the basket of the salad spinner and rinse, before spinning dry. I've yet to have a gritty soup or casserole that way! I love them in a cassoulet with white beans and topped with biscuits!