1. I got some free silverware! 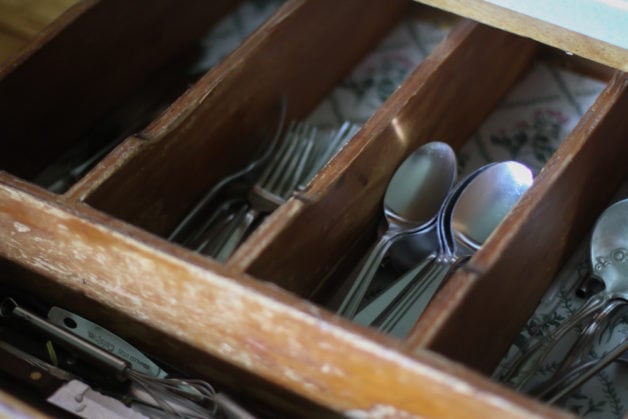 We were getting by with a rather motley assortment of flatware from the abandoned house, but we were pretty short on knives and forks.

So when someone from the Buy Nothing group offered a set of Martha Stewart Living flatware, I threw my name into the hat, and I got chosen!

(She’d received a new set as a gift, so she didn’t need this Martha Stewart set anymore.) 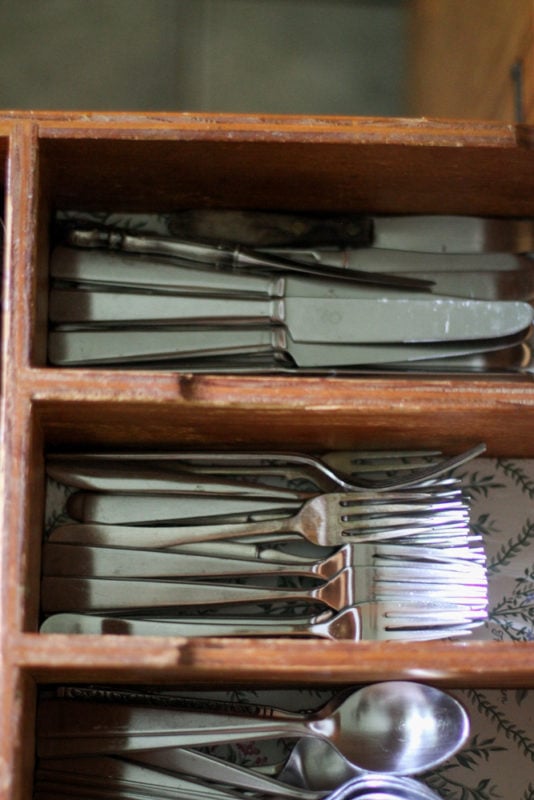 I am so delighted to have a well-stocked silverware drawer again.

I took a peek at the markdown shelf at the grocery store and ooh! There was a bag of coffee that I like, marked to 50% off. 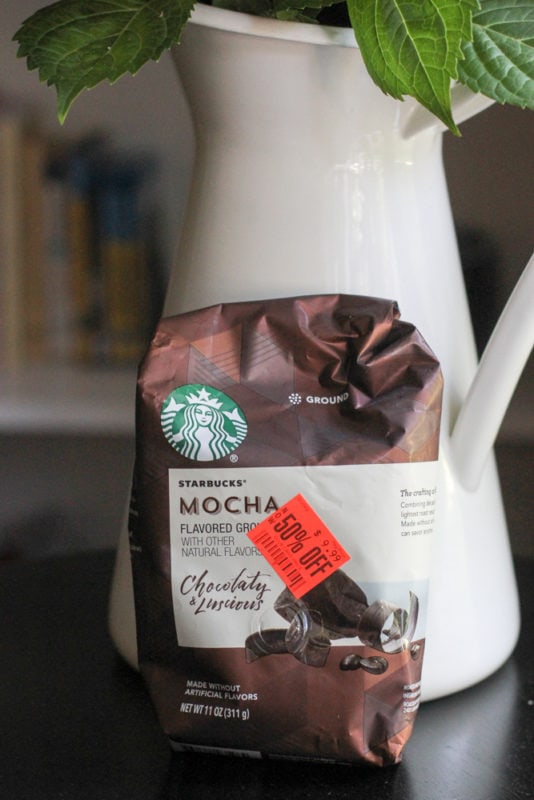 I have no idea why it was marked down (it doesn’t expire until August) but it’s all good by me. 😉

3. I cleaned out a clogged ear

(I promise I will keep this as un-gross as possible.)

Being a self-moisturizing person (aka greasy. Ha.) has upsides, such as the fact that I almost never need to use lotion.

But a downside is that sometimes my ears are a little overzealous with the cerumen production, and it gets bad enough that my hearing is muffled.

You can go to the doctor to have your ears flushed out, but I didn’t really want to pay for an appointment, so I tried the Debrox ear drops.

It took several applications over several days, but my ear is doing way better now.

And this reminds me that I should probably do this treatment every now and then as a preventative before my hearing gets muffled!

4. I got Zoe a free Slurpee 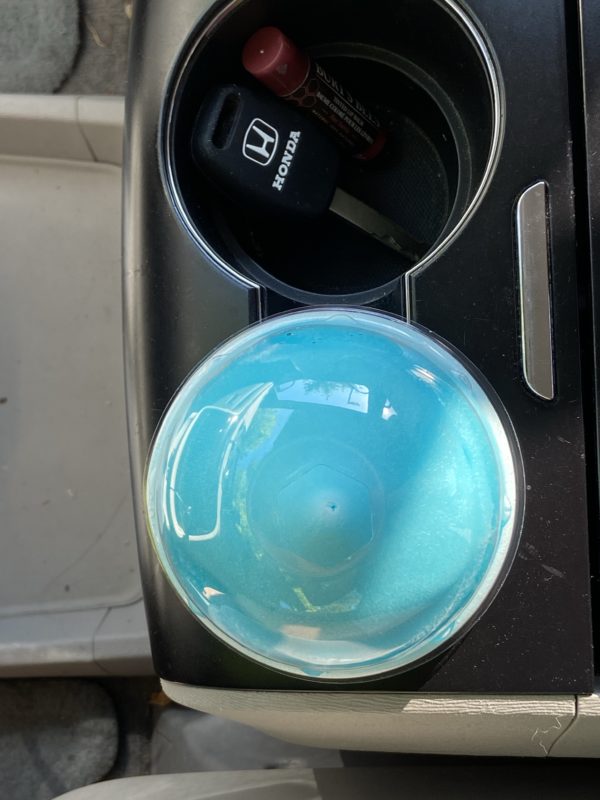 Yesterday was 7-11’s anniversary, so they put a free Slurpee deal in the app. I had to run out to the grocery store anyway, so I brought home a Slurpee for Zoe (she was in online driver’s ed!).

I printed a recipe the other day, went to add it to my recipe binder, and realized that I had no hole puncher.

I stopped in at Office Depot after my cat shift and was a little surprised at how expensive these are (I was not expecting to pay $30-$50!) 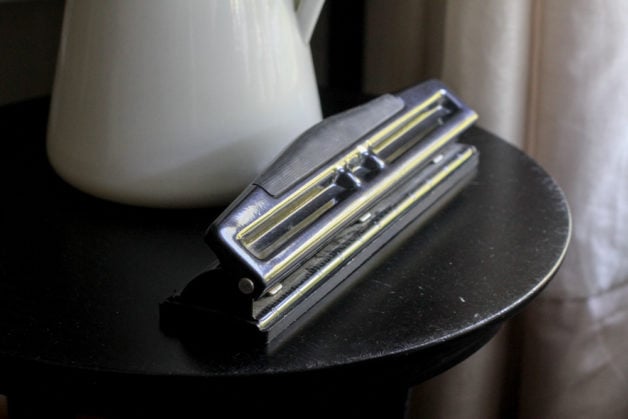 So, I don’t deserve a lot of credit for this one, other than this: I put the word out.

I remember Amy Dacyzyn (of Tightwad Gazette fame) wrote about this years ago, actually! If you let people know you are on the hunt for an item, sometimes you can get the item for cheap or free.

Back in the Tightwad Gazette days, word of mouth was basically the only option, but in this age of Facebook groups, it is easier than ever to put the word out.

Your turn! What frugal things have you been up to lately?

My big one that I am SO excited about it is a piece of furniture. My younger son’s current dresser is too big for his room so I’ve been wanting to downsize for a year. Went to Goodwill on TUESDAY and found a banged up, but sound Mahogany dresser for $25. Now I get to channel my inner Kristen and fix it up!!

Ooooh, that is exciting! I got Sonia's dresser at Goodwill for $25 as well, and it was so satisfying to fix up. It's this one: https://www.thefrugalgirl.com/sonias-25-goodwill-dresser-is-now-white/

I went to an estate sale and everything was 75% off. Score! I got over $70 for less than $20. Including 2 pair of shoes, some books that have been on my wish list, some Christmas decorations, a couple of shirts ( one with tags on still), a new laundry bag for my delicates, and much more. I love garage sales, but I have to be careful not to buy just because it is a bargain. I did good. It made my day. I found a broken 3-color pen in a parking lot. It is the same design as the one I use at work. My work Pen's black died a day ago. I decided to see if I could change out the ink. I was able to and it was easy, two minutes no special tools. It is much easier to have one pen instead of 3 and I use each of the colors every day. This is only 2, but I'm tired and can't remember the others at this moment. Again, I love this blog. Keep up the great work.

1. Cut my daughter's hair into a blunt bob. It's not perfect, but have received a few compliments, so a win. 2. Had a garage sale to sell off items before moving, rather than dealing with them when we arrived at our destination. 3. Are planning to use garage sale proceeds for bikes for our new location that is laden with bike paths. We made enough to pay for one bike, so just one more plus a chariot to pull my son left to fund. 4. Took up realtor on her offer to get a stager for consultation before pictures are taken. I thought we'd need to replace carpeting and paint the exterior of the home, but both realtor and stager think it'll be fine without. So glad. 5. Watched my son decide to make "quarters" by selling lemonade for $0.25/cup at the garage sale. He walked away with $8 and wants to start a lemonade stand business. He decided to raise his price to $0.50/cup in order to afford supplies and still make money. It's fun to watch him connect the dots with time/energy/resources=money. Money isn't the end all, be all, but he's just figuring it all out.

1. Went to our favorite consignment store. I dropped off a box of dishes and clothes to sell. I bought, à purse, backpack, 2 pairs of jeans, leggings, another pair of pants, 3 shirts, a dress, 3 notebooks and a blank planner. I paid $78 after $9 was taken off from credit on my account. I estimate buying all that new would be at least double, especially since one of the jeans were Calvin Klein! 2. Spent about $18 at Goodwill and got 2 pairs of flip-flops, swimming trunks, and 2 tank tops. 3. Used hipcamp to find a camping site on our drive. We spent $30 for the site instead of $60-80 for a cheap hotel. This also helps us stay moderately active and being in nature puts us in good moods. 4. I signed my daughter up for a program where she'll be able to receive an accredited diploma through homeschooling. It's not cheap, but because I registered early, I got $75 off. 5. Enjoyed a picnic ans swimming with family at a free park.

I bought the Blue Echo Care wax removal kit years ago when my kids were kids. It uses hydrogen peroxide and warm water. Best investment ever. I will not tell you what comes out of my son's ears. 1. My sister was going away with 2 friend's and needed a dog sitter. I asked if we could watch him at her house for a few days. She told me to bring our friend's with us.(Both lost their jobs during Covid. They are both employed now but are not making the amount they were prior to Covid) Her house is a multi million dollar house on the water. She has a beautiful in ground pool where we spent our days. We had multiple fires, watched the sun set, looked at the moon with her telescope, played pool, took naps and played cards, and lots of other games and cooked delicious food. All it cost us was gas to get there. We brought her dog home with us and she will get him this weekend. 2. I picked lots of peas, cherry tomatoes, wineberries and lettuce when I got home. 3. Our kids(20 & 23) stayed home and took care of the house, garden etc. 4. Our friends brought zucchini, yellow squash and string beans from their garden. They sent me home with extras. 5. Eating leftovers today.