Since I’ve mentioned composting here and there in my posts, I thought I should maybe share exactly how I compost. I don’t have any special equipment, and my total monetary outlay for my bin was about $6.

Back in April, around the time I started working on reducing my food waste, I got inspired to try composting. I heard great things about worm bins, but they seemed a bit complicated, and I didn’t want to have to buy a bunch of worms! Happily, one of my commenters pointed me to some very simple instructions for a plain old wormless compost bin, so I decided to give it a try.

Following the instructions on You Grow Girl, I made my own bin from a Rubbermaid container. Basically, you just need to cut a bunch of air holes in the lid of the bin, and several drainage holes in the bottom. The site said to use a knife, but I’m not nearly patient enough for that! I got out the drill and made quick work of that….a few minutes, and I was done. 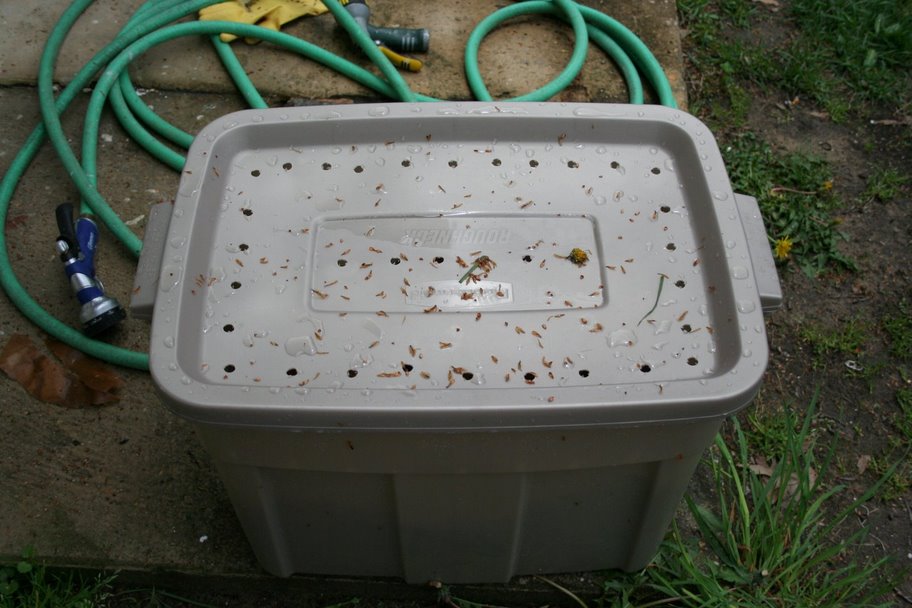 I started it off with some leaves and some fruit and vegetable scraps, which I soaked with water, and I’ve been adding produce scraps, tea bags, egg shells, hair clippings, and sometimes some paper ever since. Aside from adding organic material to the bin, all I have to do is turn the compost with a shovel every couple of weeks (although I sometimes forget about it and leave it longer than that, especially in the wintertime when it’s frozen solid and can’t be turned.).

2014 Update: To keep my compost from getting too wet, I try to add a layer of browns (dead leaves, shredded paper, etc.) whenever I add a bucket of food scraps to the bin.   I find that this also helps to reduce fruit fly problems in the summertime, since the wet scraps are always covered by a dry layer of browns.

I’ve been using the bin since April, and it’s only just now getting full (and I even put a whole pumpkin in there). I’ll probably buy one more bin to use and I’ll just let this one rest until spring. Hopefully at that point I can empty it out and use the compost to fertilize the beds in the front of my house.

The bin is out in our backyard, which isn’t the most convenient place in the world. To make things easier, I keep a small plastic bin on my deck, which is right outside of my kitchen, and whenever I have some compostable kitchen waste, I just open the door and throw it into the little bin. 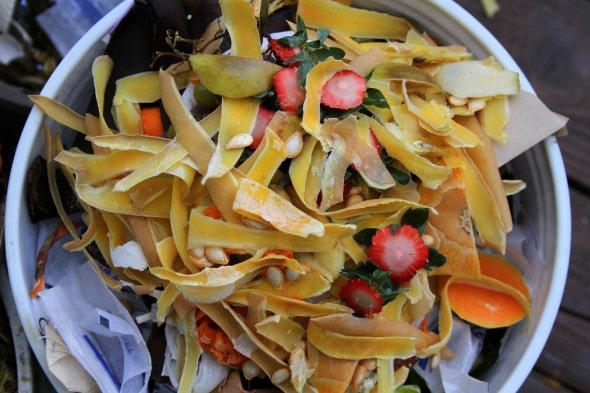 And when the bin gets full, Joshua, a.k.a. Compost Boy, comes and empties it into the big bin in our backyard. 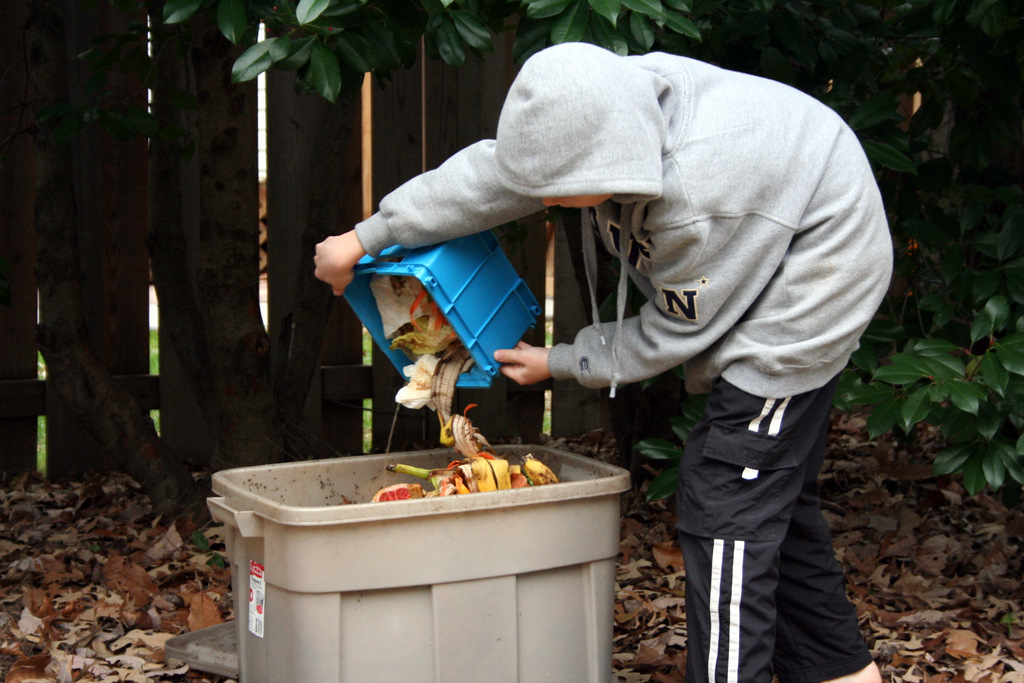 Composting has greatly reduced the amount of trash that comes out of our house, and it make our trash less stinky. Before I started composting, I often had to take out a bag of trash that was only half full simply because it smelled so bad. Now the only smelly things in the trash are meat-related items, which I usually just put into a small bag and take out right away.

Of course, cutting back on our food waste has certainly contributed to the reduction in trash, but composting has played a very large part. Even the most faithful leftover eater is going to have some food scraps (no one is going to eat tea bags and banana peels), and it’s nice to have an environmentally friendly way of disposing of these inedible items. 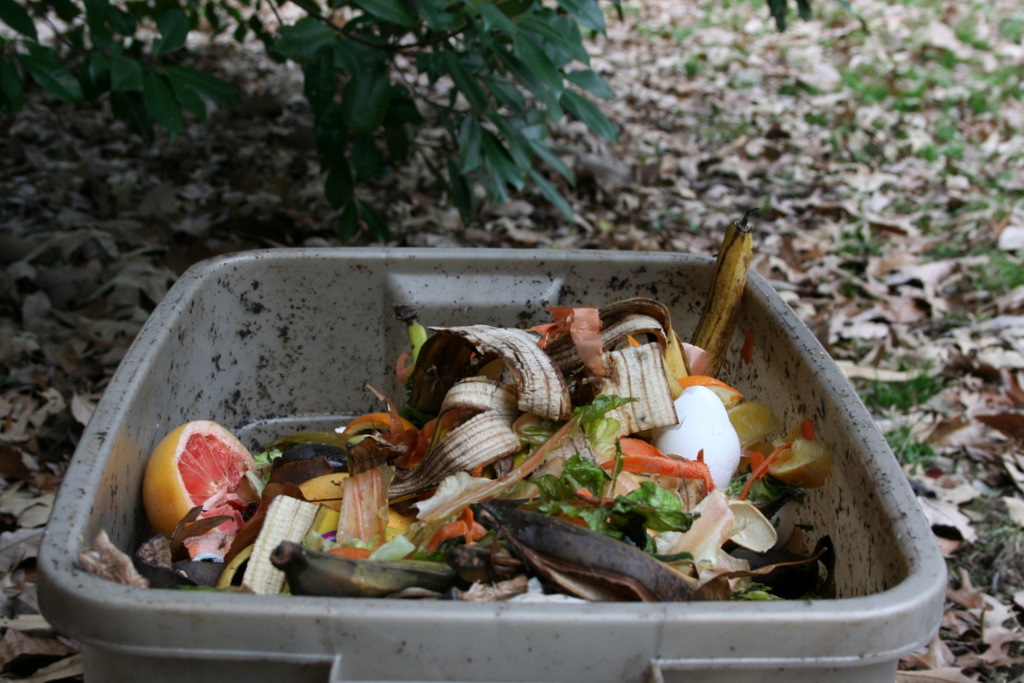 You've probably already heard of this method as well...I made my compost bins out of old pallets. The idea is in no way original to me...but here's a link to my blog, and how I did it. http://happilymarriedtothecows.blogspot.com/2012/05/making-compost-bin.html

Is there an odor problem with this?

In cold weather, definitely not. In the summer, there's a bit of an odor when you stir up the compost, but as long as you keep adding equal amounts of greens and browns, it should be manageable. I mean, I wouldn't want to keep it in my kitchen, but it's fine in the backyard.

In my experience, compost starts to smell terrible when it gets too wet, and so for me, it's really important to layer my food scraps with layers of leaves, paper shreds, and other dry brown items.

There are four families in our building (including ours) and we would love to bin compost! Our issue has been animals getting into the bins. How do you keep the rats, squirrels, and raccoon population from chewing through the plastic bin every night? Also, do you screen the holes? If not, how do you keep flies from laying eggs and inadvertently making a maggot colony?

Your tips would be greatly appreciated!!!

I haven't really had problems with animals chewing through my bin, and the lid seems to keep them from accessing the compost through the top.

I haven't screened the holes, but I find that layering each round of green additions with a layer of brown really helps to keep the fly population down.

I will definitely try this. Have wanted a compost bin forever.Thank you for the idea. Sincerely,Sylvia Mckinnon

You make it sound so easy! This would help my garden so much. How long do you compost until it's ready to add to the ground? And how badly does the compost bin smell?