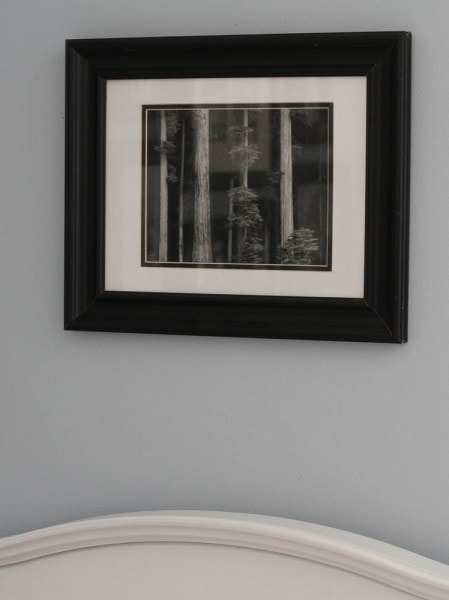 I buy an Ansel Adams calendar every year (after Christmas, of course, when they’re 50% off!) and this past Christmas, as I was getting ready to recycle the calendar, it occurred to me that it’s kind of a shame to throw away these lovely black and white pictures, which are on nice, heavy duty paper.

So, I dug up an old black photo frame, dusted it off, cropped the calendar picture to fit, and voila! I have a nice framed black and white picture.

The frame is actually a total cheapie, but it came with the mat, and I think the mat makes a huge difference.

If you don’t happen to have a frame sitting around, they can be had cheaply at a place like Michael’s or A.C. Moore. They go on sale for 40% on a regular basis, but you can always use one of the 40% coupons from the ad if you don’t catch them on sale.

Originally, I put the frame on an empty wall above a table that I got from freecycle.

Since I took that photo, I’ve lowered the picture frame on the wall and added a tall candle-holder, so that there’s not such a large white space between the table and the picture.

While I adore black and white pictures, I didn’t think I really needed twelve of them on my walls.

Rather than throw them in the recycling bin, I posted the picture of my framed photo on freecycle as an example and offered up the rest of the calendar. I divided them up between two people, and so to the best of my knowledge, nothing but the wire from my calendar has gotten thrown away.

By the way, the picture below is what that area used to look like.

When we moved in, there was a low drop ceiling there, carpet, a little skinny opening to that area, and no door on the laundry room. With the help of my dear dad and brother, we framed and drywalled the area, added a pocket door, installed recessed lighting, and tiled the floor.

It’s still sort of a weird, hard-to-use area in our house, but it is SO much better than it used to be.

2015 update: the photo now hangs in Lisey’s room, above her bed. 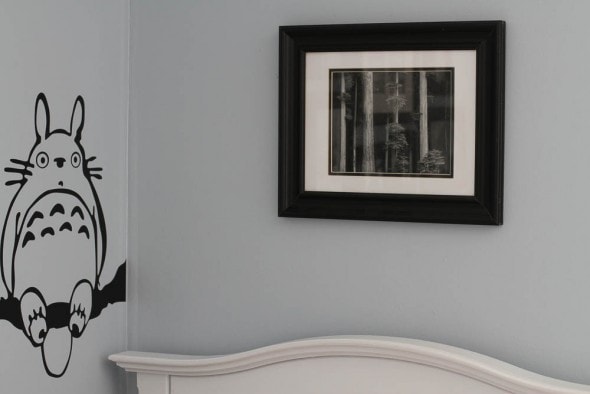 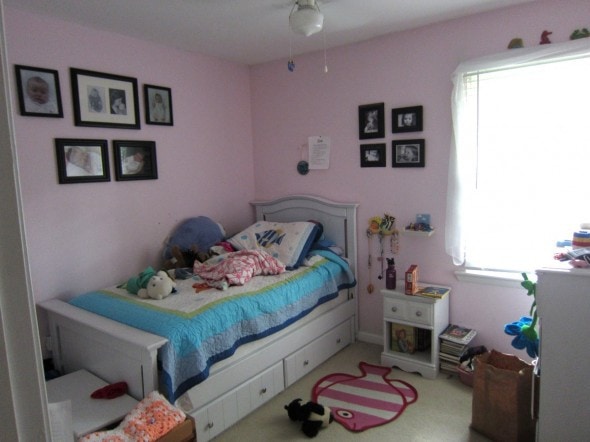 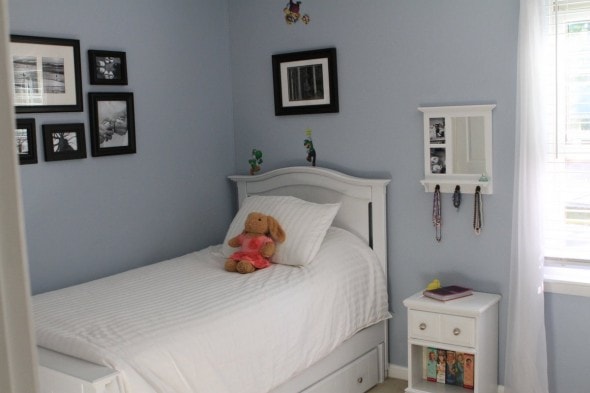 If you love before and afters, here are a bunch of photos of this bedroom redo.

[...] have no kids and your camera skills are abysmal, this idea could still work, with some variation.  I framed a black and white picture from my Ansel Adams calendar, and you could easily make a set of these to give as a [...]

You could save several of the pictures from the calendar and rotate them so you don't have the same picture up all the time. This is predicated on the frame backing being easy to remove and replace!

I always hated throwing those beautiful calendars away, but they piled up without a purpose. Then I had a brilliant idea - giving gift cards at holidays and birthdays is all the rage (when we're not recycling something - I'd rather give some money for something, even a night out to dinner, than purchase some junk no one wants). So I take the past calendar pages and fold one into an envelope to put the gift card into. It really looks great with art-style pictures such as Monet or modern art calendars. And I get to feel good about giving money in a beautiful wrapping that cost me nothing!

I plan on doing this with some of the prints from last year's Katsushika Hokusai calendar. Once I get my apartment I will obviously want to have some art (besides my own so I don't feel like an egomaniac or something.)

My brother seeks out old calendars with nice photos for repeating years. I think his goal is to have as many calendars as possible.

Check out this link for more info: http://www.timeanddate.com/calendar/repeating.html?country=1&year=2009

Oh, that is a good idea too...to look for old calendars on clearance.