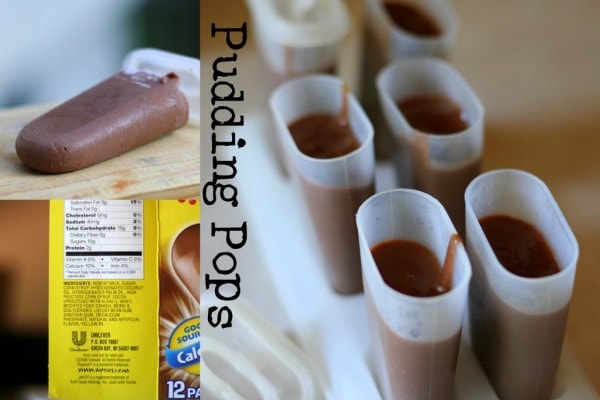 I’m going all Amy-Dacyzyn-y again! (in case you weren’t aware of it, she’s the Tightwad Gazette mastermind and she possesses the patience to do very detailed price comparisons down to the penny. That doesn’t come naturally to me, unfortunately!)

For my super-scientific (!) comparison, I bought a package of Jello Pudding Pops at Aldi, where a 12-pack box sells for $2.50. Aldi’s ice cream novelty prices usually look pretty good to me, so I’m guessing that this is probably on the low end of the price spectrum. If you happen to remember how much pudding pops go for at a regular store, do leave a comment and share that info!

I’m going to compare the cost of the real pudding pops to homemade pops made with my recipe for homemade chocolate pudding. I could swear that I’ve posted it (the pudding recipe) on my blog before, but I couldn’t find it! I’ll try to rectify that soon.

I don’t have my vanilla price handy, but the Tone’s variety on Amazon costs about 9¢/teaspoon.

What about pudding pops made with packaged pudding mix?

A homemade pudding pop weighs almost exactly the same as a packaged pudding pop, but the homemade version makes only 8-9 pops and there are 12 in the Pudding Pops package. A theoretical 8-count package of pudding pops would then cost $1.66.

So, here’s how things stack up.

8 pudding pops made with from-scratch pudding-$0.82

The homemade versions are definitely cheaper, but not by an amazing amount (though percentage-wise, it’s a big savings…50%). If the pudding pops were purchased at a regular grocery stores, I think the homemade ones would be more of a win.

Price is really not the only consideration here, though. Take a peek at the ingredient list for the commercial pudding pops. 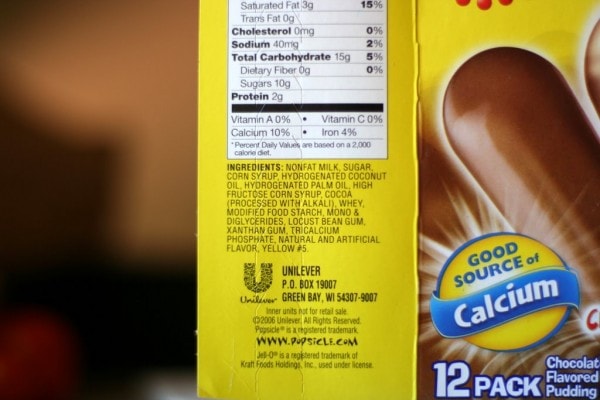 There’s high fructose corn syrup, two kinds of hydrogenation oils, and several non-food-ish items at the end of the list. Dear me.

Then too, there is the fact that eating a box of commercial pudding pops leaves you with this, a pile of nonrecyclable trash. 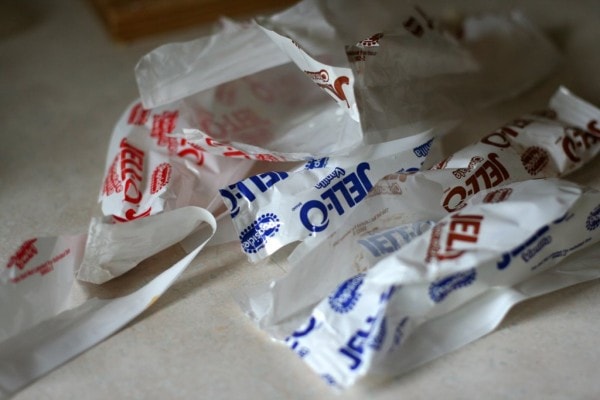 And eating a batch of homemade pudding pops leaves you with this, a pile of washable, reusable containers. 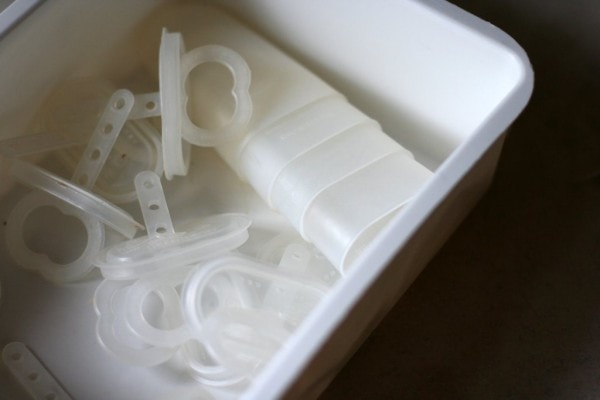 Of course, the ingredients for homemade pudding come in containers too, but every single one of my ingredients comes in a recyclable or compostable containers.

I think the commercial pudding pops have an advantage texture-wise, as they’re fairly soft straight from the freezer. Homemade pops need to sit at room temperature for a few minutes before they’re soft enough to bite. This doesn’t bother me at all, but it might concern someone who’s used to the commercial pops.

Taste-wise, I think the chocolate commercial pops were similar to the homemade ones, but the vanilla ones tasted awful to me. They had a very processed, fake-vanilla taste to them. I imagine a homemade vanilla version would have a superior taste (I’ll let you know!).

So, the homemade pops are a win over the commercial variety in every area except texture, and that is mostly solved simply by letting the pops hang out at room temperature for a few minutes. Honestly, I wasn’t even aware that the texture was an issue until I tried the commercial ones (this was my first box ever!), and I still feel like it’s not a big enough deal to warrant spending more, eating weird ingredients, and producing more trash (especially if you’re like us and aren’t used to the commercial pops in the first place!).

Also, I want to know what you eat for breakfast on the weekends!

Ok, I'm sold. Because of you, I'm not paying closer attention to the things I can easily make at home that don't have all of those difficult to pronounce ingredients and chemicals. And they are cheaper. I now make a lot of homemade bread, and when I am not so busy I will be trying homemade yogurt. I appreciate it. I absolutely LOVE your blog and look forward to every post. In fact, I copied your idea and made my son his own blog. (His isn't photos only) I just haven't figured out how to link it to mine like you did. Check them out! www dot homemadebest dot wordpress dot com www dot searchingforclues dot wordpress dot com

Now, I need to check garage sales and Goodwill for these molds because I don't want to waste paper products to make them that way. Thank you SOOO much!

Thanks for a great "recipe"! I just made popsicles and thought... oh pudding pops would be good too... and so did a google search and found your site. I am totally gonna check out the rest of your site. I love this idea because I have some boxed pudding mixes that I don't get around to making because I don't like the "film" that gets on the leftover pudding... but making pops out of it would be awesome, and then when they're gone I can use your awesome looking pudding recipe! Thanks a bunch!

Hi, I have been following your blog for a few months now and I am addicted. I look forward to reading your post everyday. I just made the pudding pops and they are now in the freezer. Thanks for sharing. I can't wait to try them!

I love the font you have used on your "Pudding Pops" graphic at the top of the post. I've noticed you've used it in some of your other scrapbooking posts......what's the name of the font? I'd love to use it too!

I usually use Acoustic Bass or Acoustic Light. I love typewriter fonts so much!

I didn't read thought all the other comments so some one may have already made these comments. #1 I think if texture were an issue you could beat air into your home made pudding before pouring it into the Tupperware mold and that would make them softer. also make more pops per recipe. #2 you didn't show the ingredients of the Jell-O Pudding box. I expect it also had unrecognizable ingredients.

Ooh, the air idea is brilliant. I will give that a try and report back.

The instant Jello does indeed have weird stuff in it. I think the cook and serve stuff is better, but still not as good as homemade pudding, ingredient-wise.