Want to know something?

I’m not particularly fabulous at making time to do crafts with my kids.

This would be fine if they were the sort of kids who don’t like doing crafts. Unfortunately, that’s not the case…Sonia especially is always wanting me to do crafts with her. 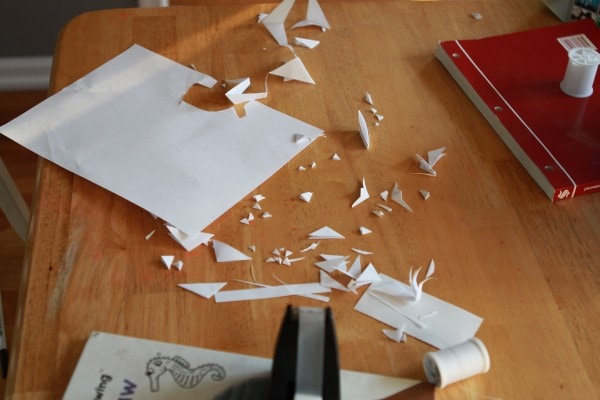 Now, I’m not great at doing crafts period, but I’m especially not good with doing them at a moment’s notice. My personality is such that I really, really prefer to know about things ahead of time. I do try to be flexible and spontaneous, but the reality is that I function at my optimal level when things are planned in advance.

When I thought about some things I wanted to do in the new year, crafts with Sonia and Zoe came to mind. And since I know myself well, I thought that I might be more consistent with doing crafts if I planned them out. So, I picked out 12 craft projects to do with them, and I’ll be sharing them with you each month.

I don’t want to spend tons of time making useless things that will be clutter or trash in a short while, so I’m being picky about the craft projects on my list.

That means that the crafts we’ll be doing will be:

For our first craft, we decided to make paper snowflakes. Now, if you’re like me, you used to make these when you were a kid, and they turned out kind of like this. 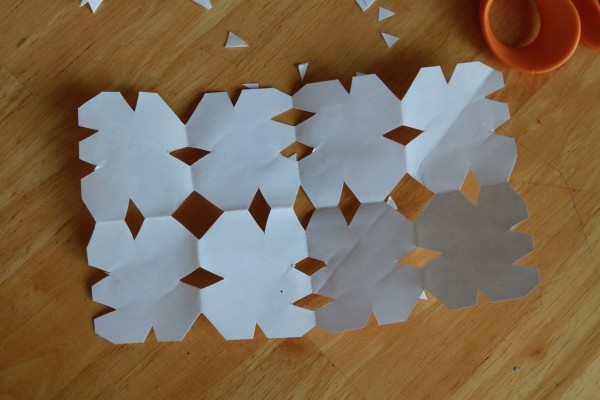 I could never for the life of me figure out how to make round snowflakes. But, the kids and I found instructions online that made all the difference in the world…just a few folds help you end up with this: 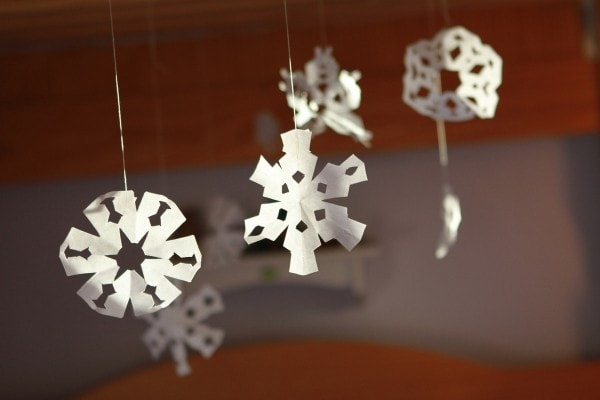 Basically, you just need a square of paper (the larger the better if you’re going for ease during the cutting stage) a pair of scissors, and the following steps. 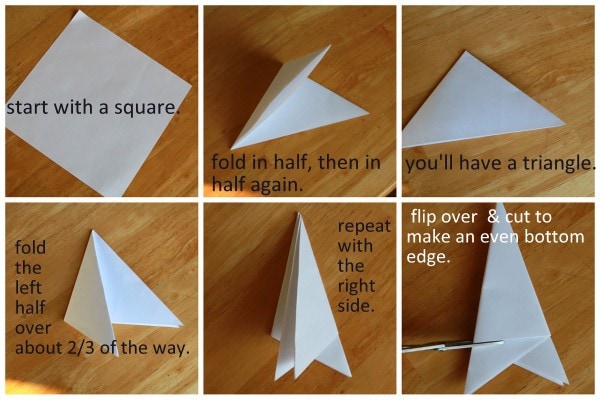 So, when you’re done, you’ll have a triangle that looks like this. 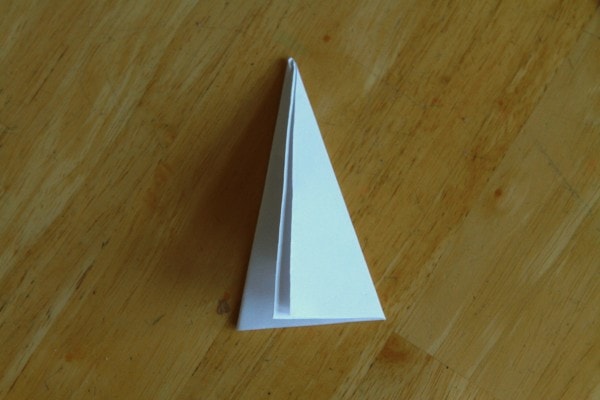 Then you just snip away to your heart’s content (there are lots of pattern ideas here.) 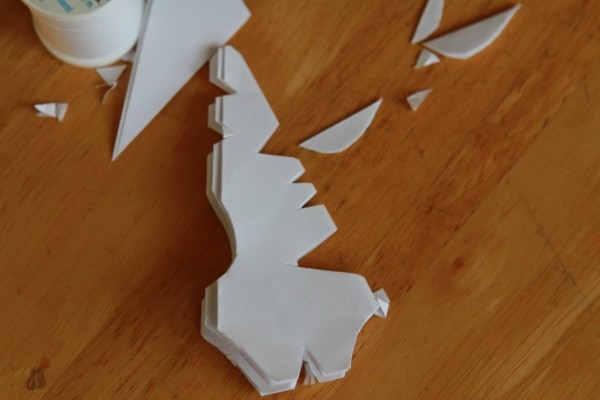 And voila! A round snowflake. 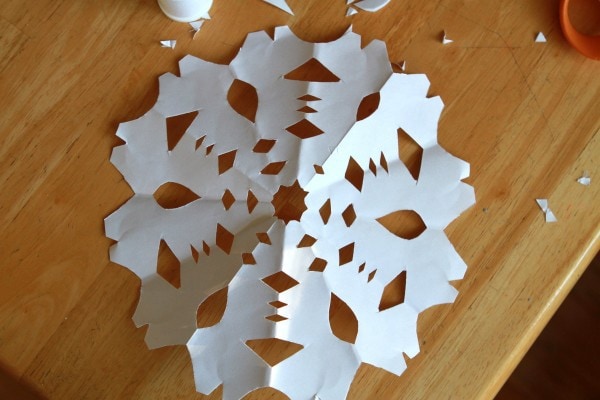 We taped cotton thread to our snowflakes and hung them from bedroom ceiling fan blades (we don’t turn these on in January usually!) in Joshua’s room: 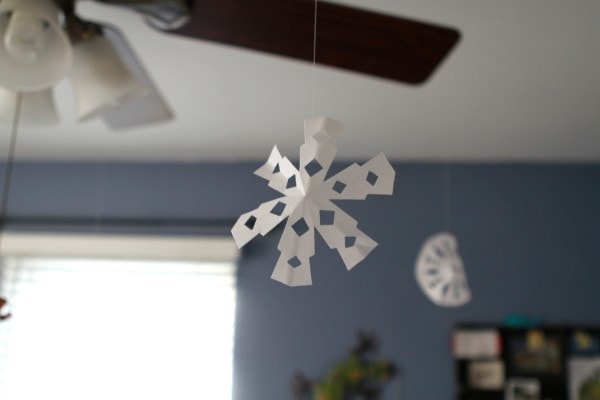 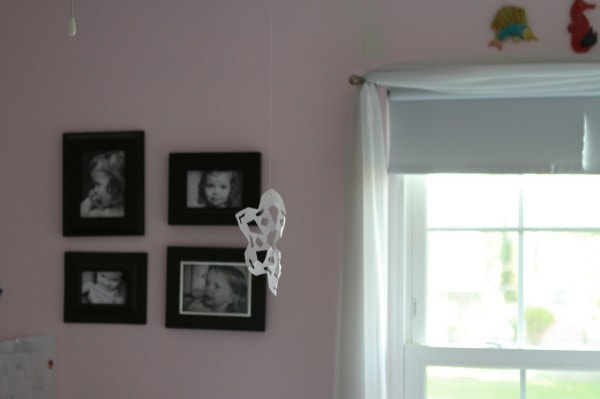 But we put the most above Sonia’s bed. The underside of the top bunk is made up of slats, and they’re perfect for suspending snowflakes. 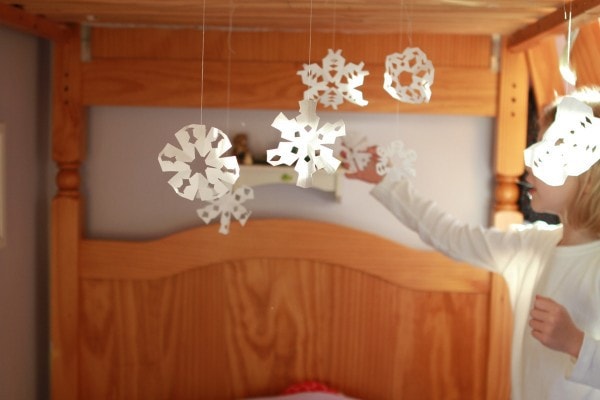 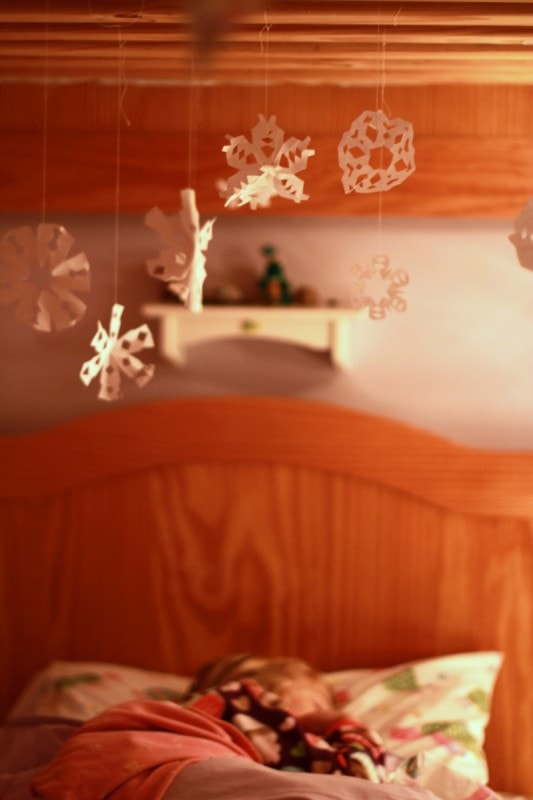 When we’re done with these flakes, we’ll just put them into our compost bin…no trash, and no clutter.

Since this craft involves scissors and small cuts, you might not want to do this if you’ve got a bunch of young kids on your hands. Sonia (7) can do the folding and the cutting, but Zoe (5) could only manage the cuts.

If you’ve got really small children, you could make the snowflakes and then involve the littles by helping them decorate the snowflakes with sparkly silver crayons/markers/glitter/paint. Or if you don’t mind having non-traditional snowflakes, you could have them color the squares of paper before you fold and cut them.

Calli = Joy.
← Previous
How about some goals?
Next →
Click here to cancel reply.

Cute snowflakes! I just wanted to suggest something, your girls look like they'll be old enough to learn how to knit or crochet. They could learn to make something useful! Also, plain white paper can be recycled. I think it counts as a "brown".

I meant composted. Not recycled. Duh.

We made snowflakes out of coffee filters! They are already round, so you just keep folding them in half until you have the same shape needed for cutting. My son cut about 50 the other day and had an absolute blast! Excited to see what other projects you share!

We have lots of craft stuff, and I have really crafty children. I don't especially enjoy crafty messes, though. One thing that works for me when I want my children to have a fun crafting experience is to invite another family or three to come do it with us. Somehow the work and mess then seem more worthwhile. Today we had two families over to make Valentines with us.

Great minds think alike! I just did a picture tutorial on how to make paper snowflakes too! :) http://sewtheday.blogspot.com/2012/01/snowflakes-for-snow-days.html

I think it is a wonderful idea to set up a craft a month to do with the kids. I love doing crafts and as my son gets a little older it becomes easier and more fun to do them together.

What beautiful snowflakes! I had to smile over the rectangle example -- when I made those they were Paper Doilies and decorated all of the end tables in the house. When they became drab or dirty out the old and in with a new pretty design. My mother was always appreciative of my artwork.