I started to wonder if I’d ever be able to say this, but I am: The cabinet project is done. 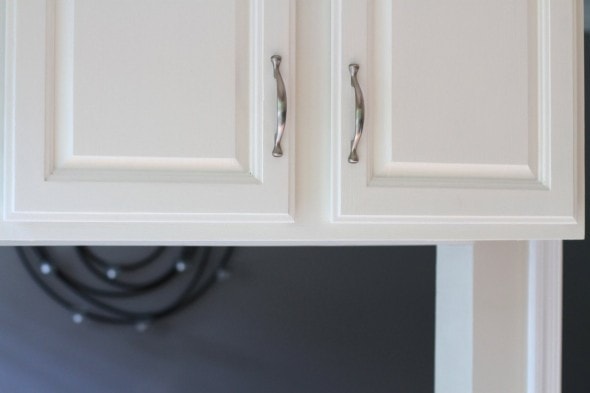 (ok, except for some cabinet touching-up…but that’s so minor and not life-disturbing, I feel it hardly counts) 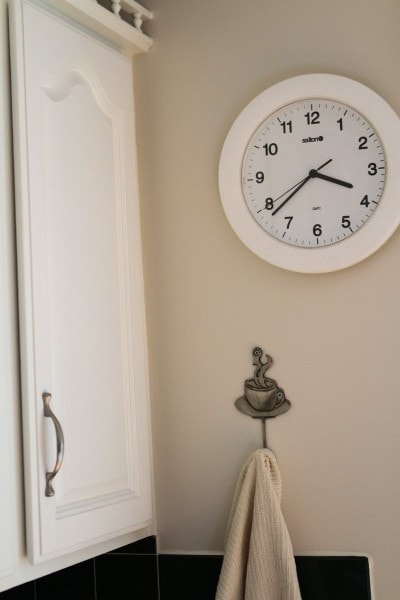 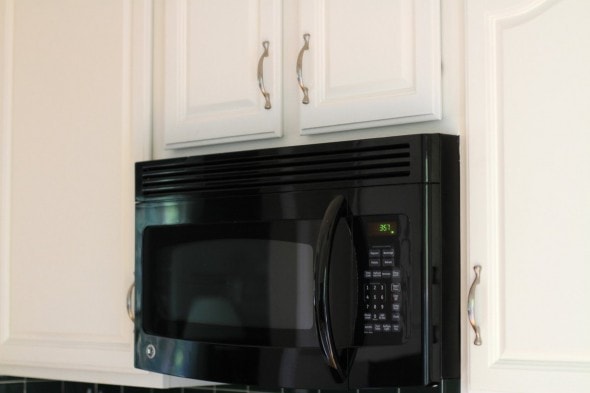 It’s pretty awful to have all of your kitchen stuff not in the kitchen. 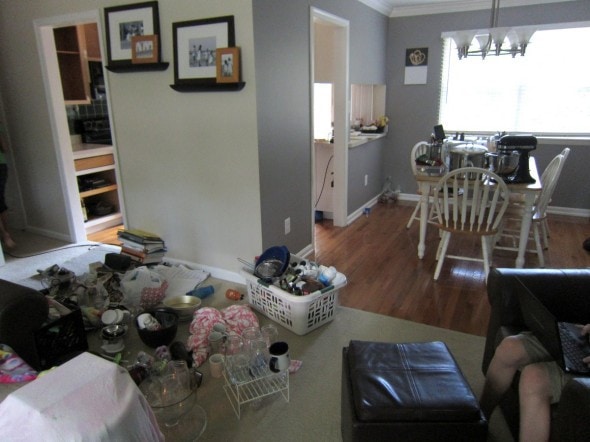 And I am very much NOT a fan of the no-doors look. Maybe that works for people who have more beautiful stuff than I do, but in my kitchen, it was a super cluttery look. 😉 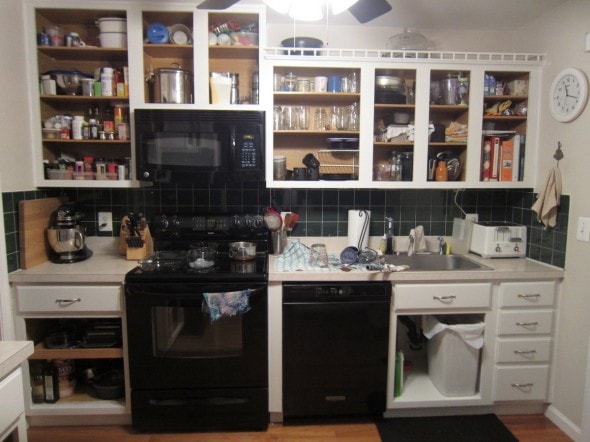 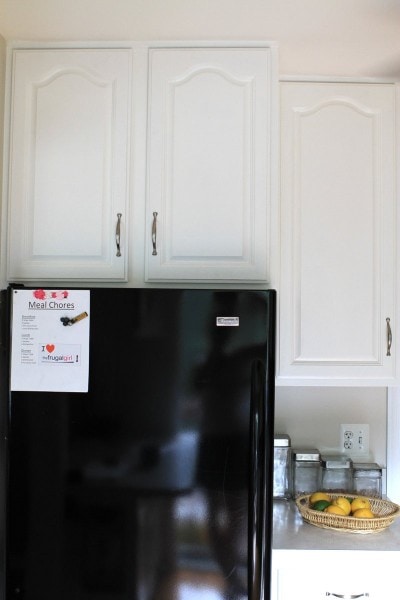 You’ve seen these two photos before, but I’m including them anyway. 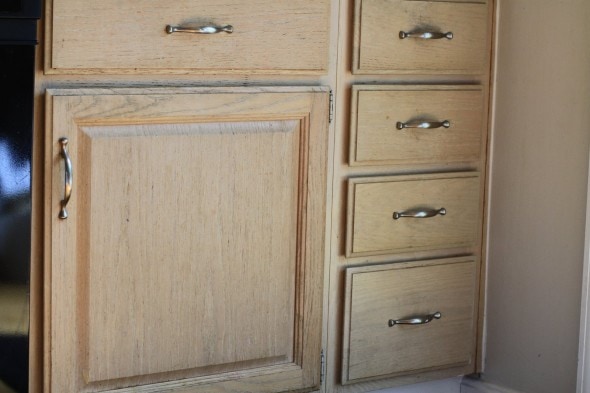 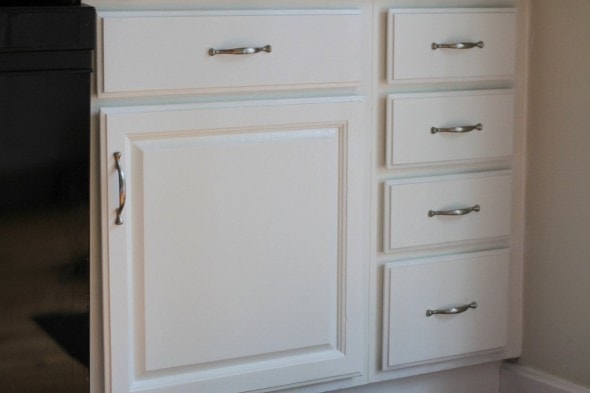 This cabinet was very used and abused, so it’s lovely to have it refinished. When we reinstalled the door, we realized that it would make WAY more sense to have it open the opposite way, so we flipped the door over and drilled holes for the hinges on the other side of the cabinet. This meant the handle had to be relocated and the old handle holes had to be filled, but that was no big deal. 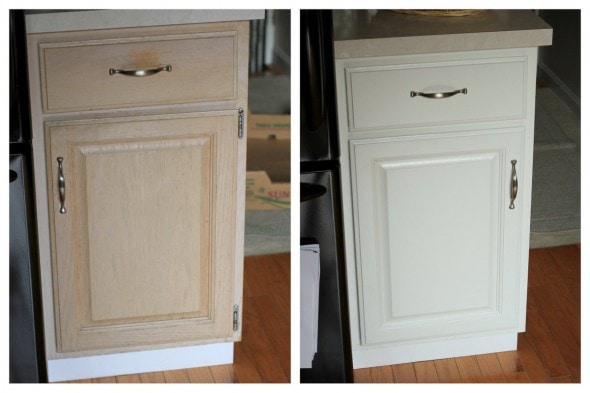 The drawer on the left had some gouges in it, and now they’re gone. Yay! 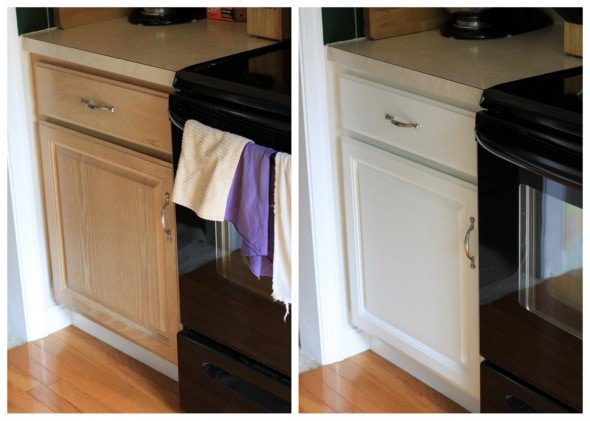 The three under my biggest counter were in pretty decent shape. 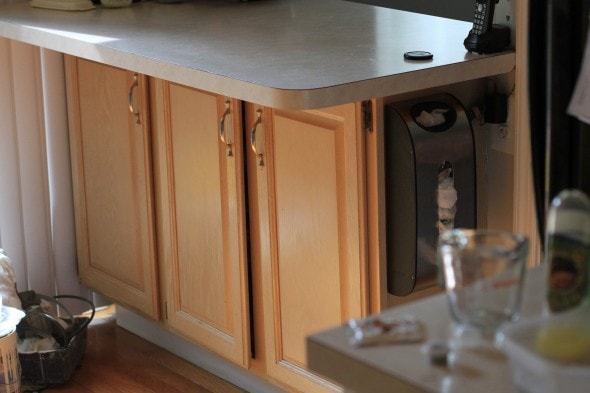 But they still look better in white. 😉 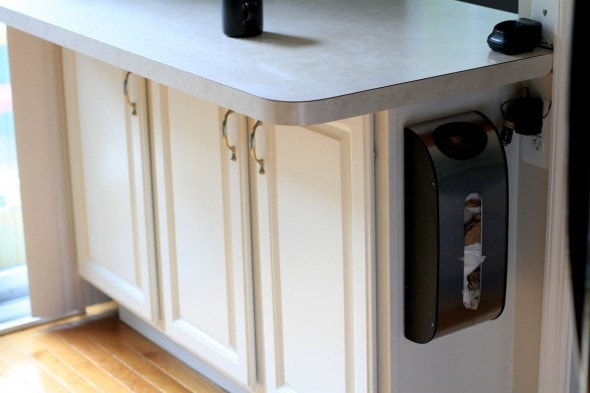 Here you can see the fake wood laminated cabinet sides, which I was a little nervous about painting. 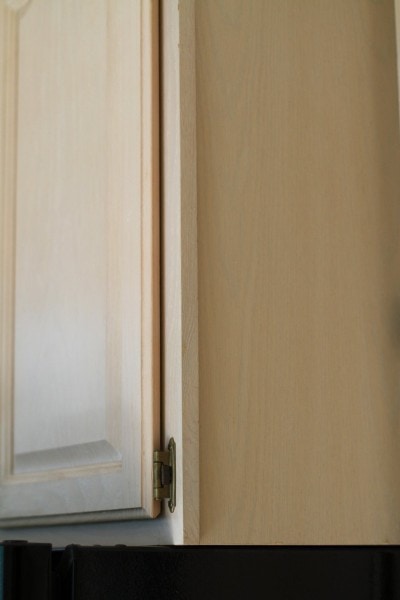 But I sanded them lightly, primed them, and painted them, and they look great. SO much better than fake wood. 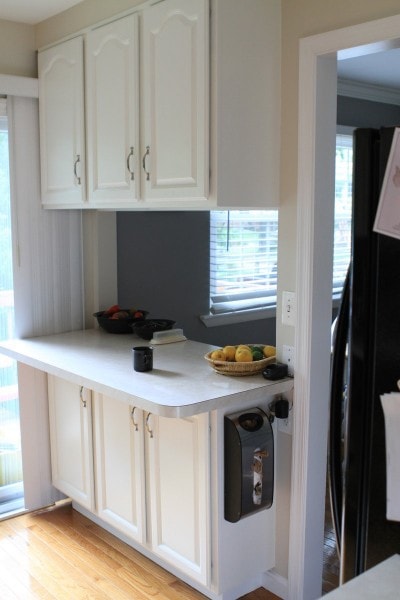 I also realized in the midst of the process that I’d have to paint the fake wood undersides of the cabinets too, since they’re quite visible when you sit at the dining room table. 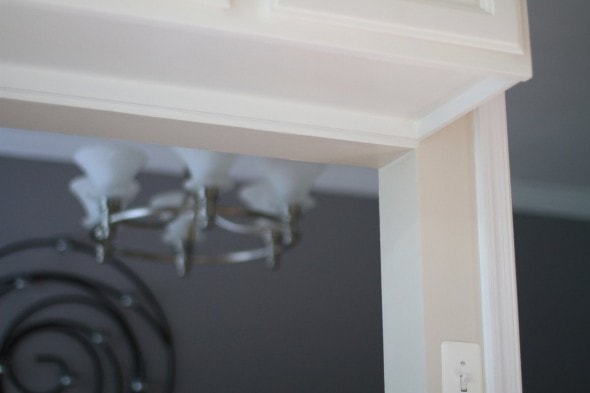 They look so much less offensive in white. Having all the fake wood painted really makes my cabinets look like they’re much higher quality now. Love that.

Here’s a before and after of the main wall of cabinets. Both photos were taken with my point and shoot because my SLR lenses aren’t wide enough to get the whole space. 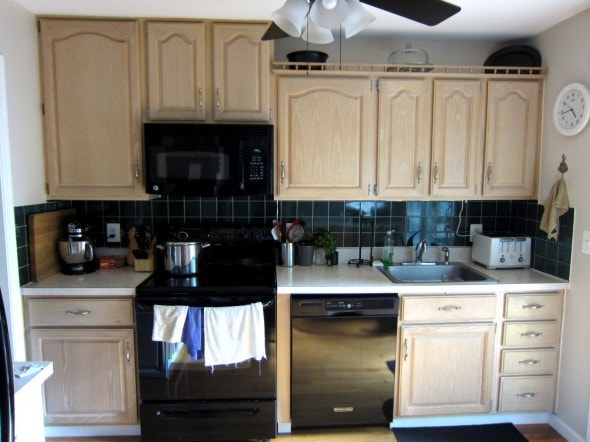 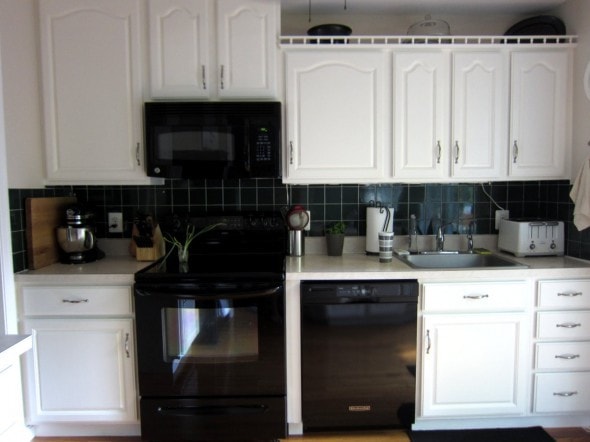 I was pretty sure that painting the little trim piece about the cabinets was going to kill me. I did discover that a small watercolor-ish paint brush works GREAT for such tiny spindles. 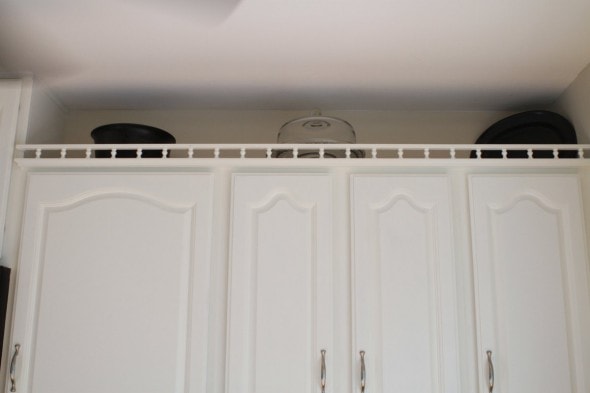 And here’s another side: 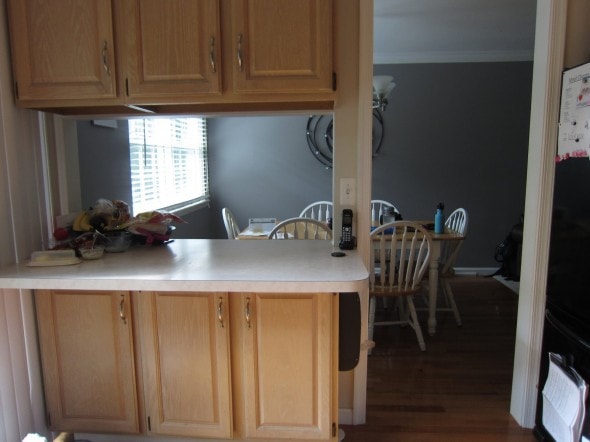 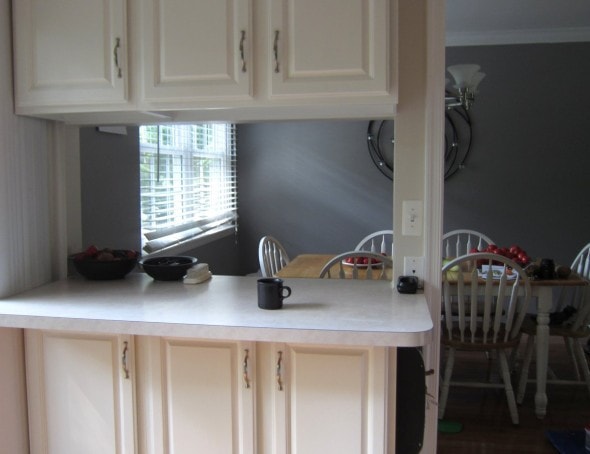 And the last side. 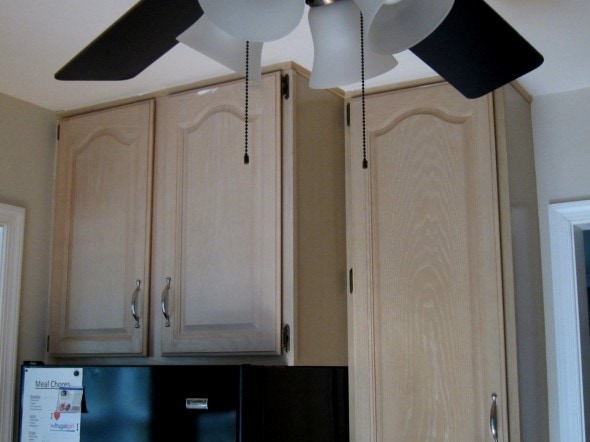 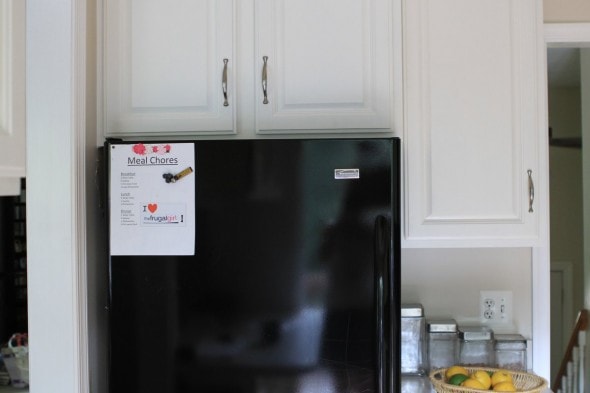 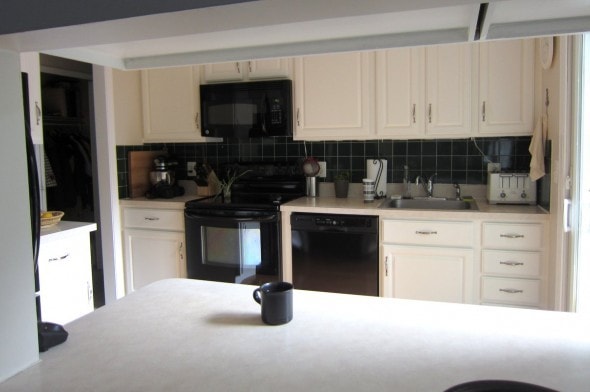 Remember the one cabinet I decided to paint inside? 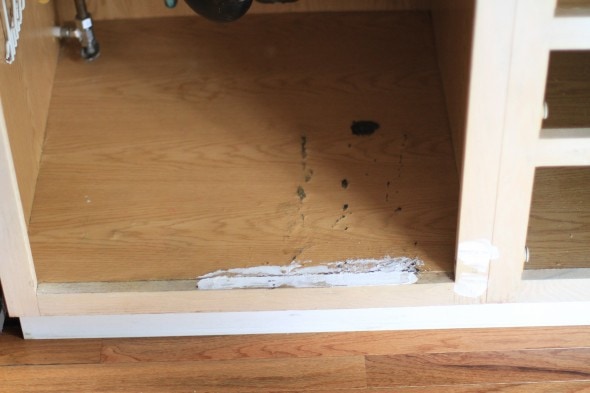 And here’s what it looks like now. I’m considering putting a coat of poly on the floor area, since the trash can gets slid in and out a lot. Regardless, this is WAY better than what it looked like before! 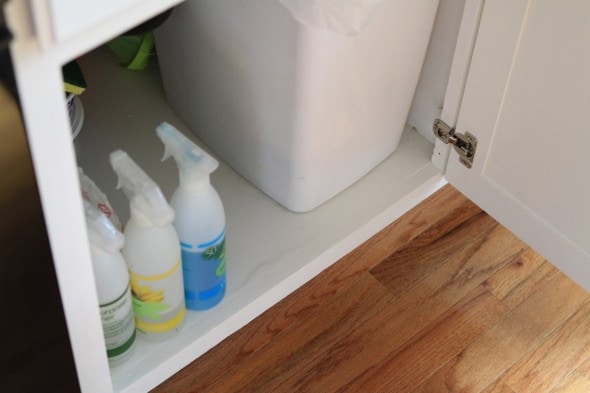 The rest of the cabinet innards are unpainted. It might be nice to have them painted, but that was WAY more work than I had energy or time for. 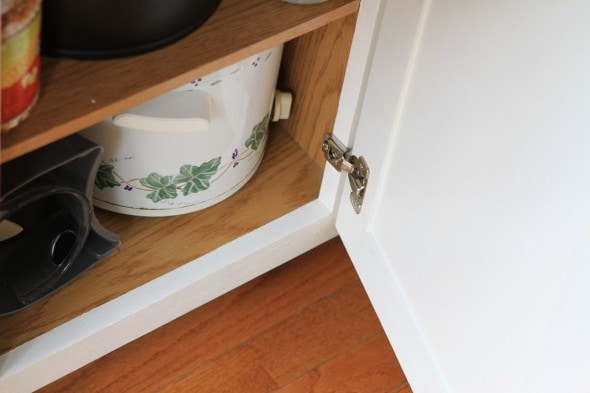 Once the cabinets were done, I noticed how dingy my moldings had become, so I painted all of the trim under the cabinets, around the doorways, and against the walls. It’s really lovely to have fresh white trim again. 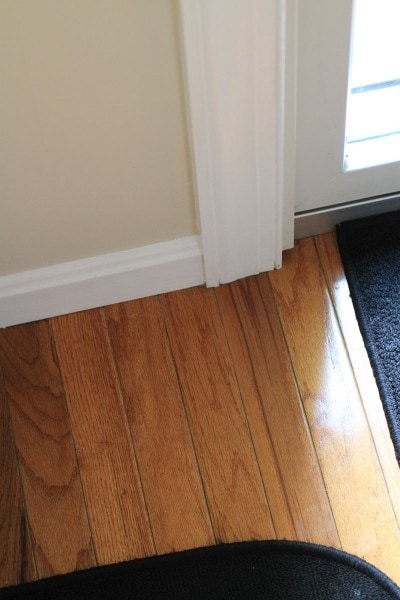 Ok. That’s probably quite enough photos for one post. 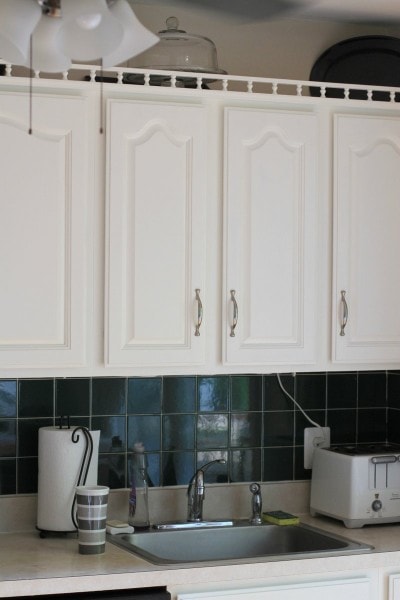 A lot of you have wondered about the method I used, and you’ll be happy to know I’ve got a step-by-step tutorial posted.

Check it out the cabinet painting tutorial right here.

I have considered doing this, and would really like to replace my Formica countertops. But the internet seems to frown on replacing countertops without replacing the cabinets. Are you looked into this anymore? Are you still considering replacing you’d countertops?

I did eventually get granite countertops, but I kept my formica ones for a number of years while we saved up for the granite.

Honestly, while the granite looks great, sometimes I miss my beat up formica countertops...since they were beat up, I never worried about babying them. On the other hand, my granite already has some chips on the edges around the sink, and that's a bummer.

This paint and primer worked to give a very opaque finish...you can't really see the grain on the cabinets. I'm not sure if the paint or the primer is to credit for that, though!

oh my goodness. I've been wondering if I could refinish our cabinets since they aren't real wood. How are the areas of you're that are laminate holding up? Ours are all laminate. I really want to paint ours white but I'm scared it won't work/look good and then I will have ruined our kitchen and it will cost us a ton to get all new cabinets. eek!

The laminate areas are holding up fine so far. Of course, they are just the sides of the cabinets, so they don't get quite as much wear and tear. But I do have one laminated cabinet side that's down by the floor, and that's still hanging in there just fine.

beautiful kristen....in your opionon the advance... does it go on nice a smooth and level itself out well?.... even using a brush?.....i was going to spray but dont want to do it in the house for the cabinet frames and sides? did you do 2 coats and does it take the 16 hours between coats to dry as it says?....do you have a super close up picture of the cabinets?.....do you see brush strokes at all?......they also suggested using stix primer and dont have to sand the wood cabinets too much......thank you....

Yep, I used a brush and it leveled out very nicely. The finish of my cabinets is smooth and hard; not like what you'd get if you brushed on regular paint.

I wrote up a post with all the details of how I went about my cabinet project right here: https://www.thefrugalgirl.com/2014/05/how-to-paint-kitchen-cabinets/