After Christmas (and after the weeks of sickness at our house!), there were some areas that needed some pretty serious attention.

I already showed that you that I tackled my laundry room (and even painted the floor in there).

I’m pleased to tell you that Sonia and Zoe and I also took on their room.   It’s been 3-4 weeks now and it’s still in good shape, which is quite amazing. 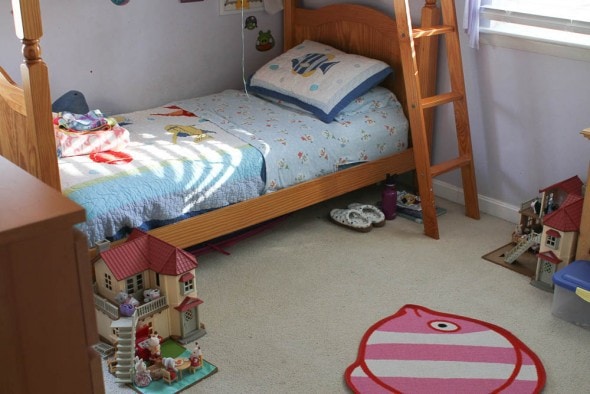 Whenever I declutter one of my kids’ rooms, I always work on it with them because I think teaching children how to clean up and pare down is super super important.

It takes practice to learn the art of deciding what’s important and what’s not, of figuring out what needs to be thrown away, and of thinking how best to organize the important things that are left.

I’m gonna pair the before and after pictures together so you can see the difference.

This one is, ah, obviously a before photo. 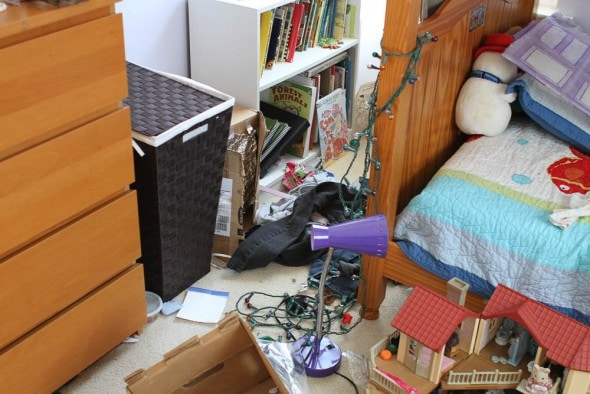 This is after, but it doesn’t really show the floor. 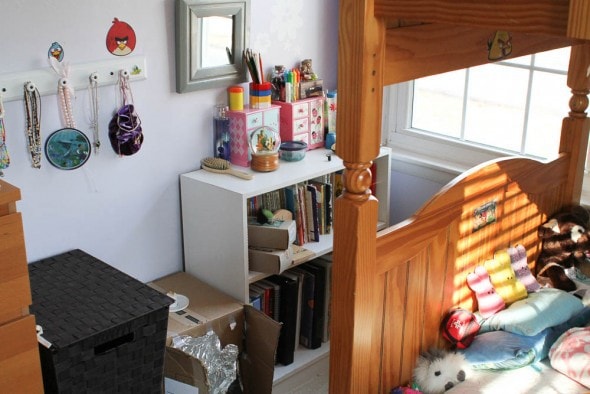 (The cardboard box with the foil is a light hut, which we are using to grow plants for our botany course.)

But this one does.   Yay for floor space! 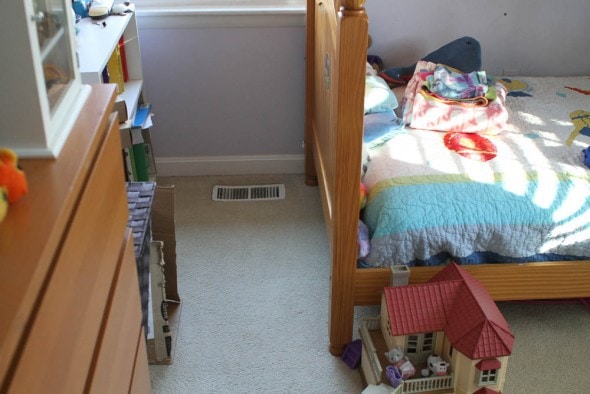 The view looking out the door then… 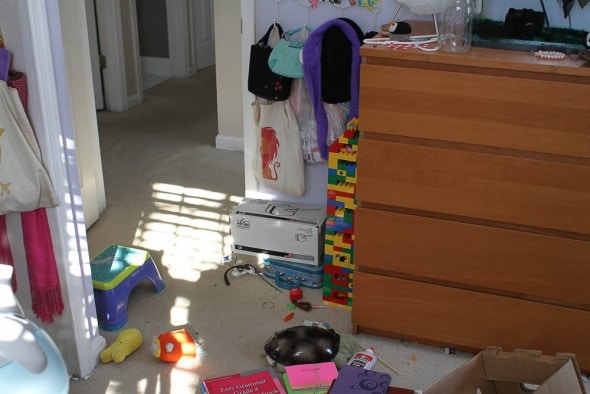 and now.   There really is less stuff on those wall hooks than before! 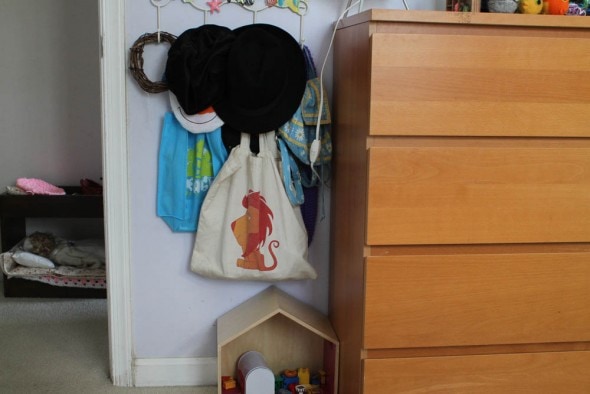 The corner by the closet before: 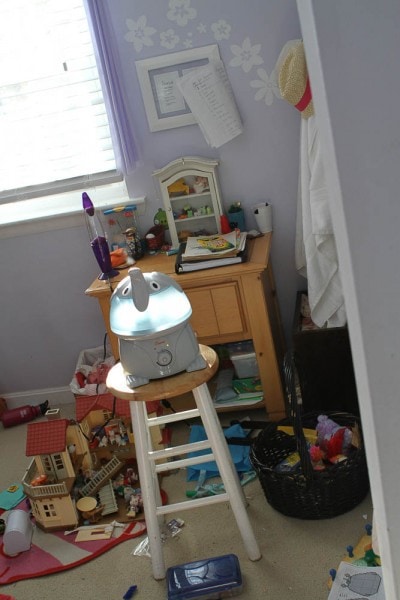 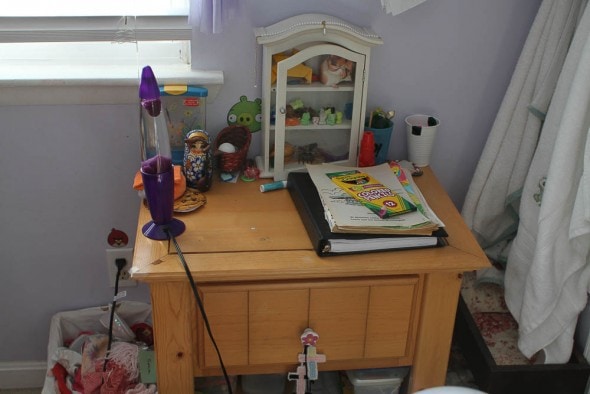 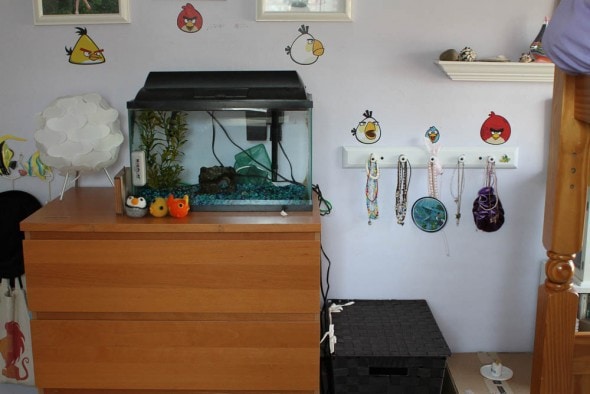 We got rid of a LOT of paper. 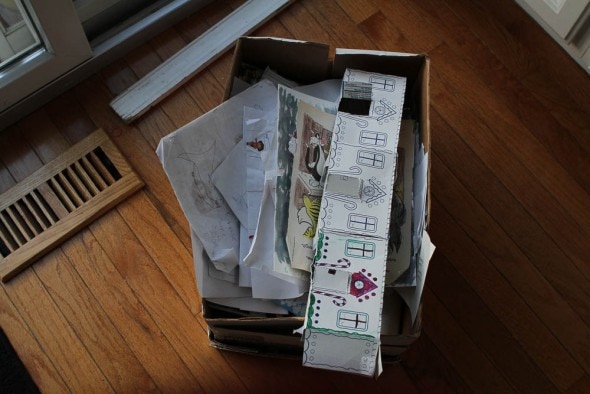 We also threw out small broken toys, found some things to freecycle, organized the closet shelves better, gave away outgrown clothes (sent some to Schoola too!) and put clothes away.

The girls even cleaned out all the random beads and papers and pencils and whatnot that were under the bed.

Sonia can fit her whole self under the bed (I posted an instagram pic here!), so she put her headlamp on, wriggled under, and went to town.   It cracked me up something fierce. 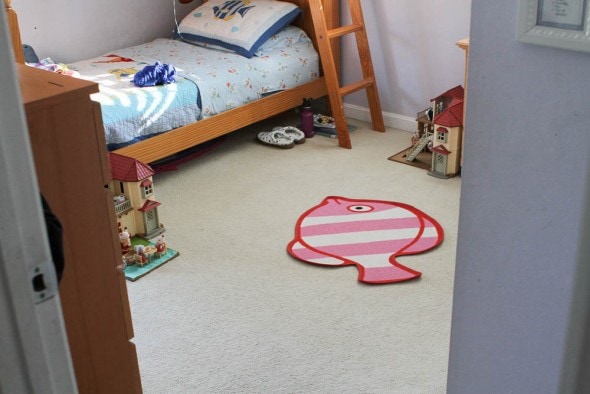 It is not perfectly minimalist and neat in there (because children have possessions!), but it is so so so much better than it was before.

And because we got rid of stuff as opposed to just organizing stuff, I think the neatness will hang on for a while.

P.S. The last disaster area of my house was the office, and while I did do a big cleanup, it’s starting to degrade again.   So, I will motivate myself to clean it up by promising to post photos!

It is absolutely great that you let kids get involved in the cleaning and organizing! I believe that it is really important to teach them to take care of their rooms and to be more responsible! You did really great! I need to try this at home with my kids. Thank you for sharing! :)

I think it is great that you involve the kids in organising and decluttering and teach them how to do it. I think many people (myself included) lack basic decluttering / cleaning skills, and I wish I had learned more from my grandma / mom when I was little. Though I was responsible for some chores, they did most of the work for us. So thumbs up!

Nice work :) I need to do some decluttering myself - it's hard because I'm renting a room and so my bedroom is also a study and storage space! I have done well lately with getting rid of clothes that I don't wear, now to concentrate on everything else.

Did I miss a critical hamster update? I remember those adorable photos of the hamster budgets, and now I see cages!

You noticed! Sonia and Zoe actually each own a little hamster now. I should take some pictures and do a little post about them, since you all saw Sonia's detailed budget sheets. ;)

Hannah @ eat, drink, and save money

Looks great! I love that you do it with them, what a great lesson!