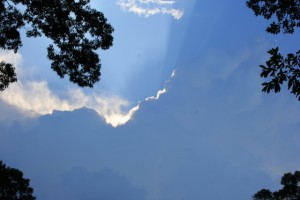 It’s been a bit chilly several days out of this month, and the temperature of our house has been dipping into the 60s(it’s been in the high sixties, though, unlike my fellow blogger Katy’s house). However, I just checked the 10 day forecast, and the highest high for the next ten days is 77 degrees, while the lowest high(how’s that for a contradiction in terms?) is 64. It’s going to go down into the 50s(and a few 40s!) at night, but it is supposed to be reasonably warm during the day. So, I think we’re going to be able to go sans heat for a while longer.

Last winter was our first after the electric rate hikes. Thankfully, it was a relatively warm winter, but even so, our bill in January was $350. I nearly hit the floor when I opened that bill…never in my life have I had an electric bill so high. At any rate, I fear that a winter filled with more average weather(read: colder) will bring bills like that several months in a row. We budget $200 a month for our electricity, so a $350 bill is, um, over budget to say the least.

Happily, we’ve been saving in anticipation of some bad winter bills. Whenever we have a bill lower than our $200 budget, we put the extra into a savings account we have at ING Direct(which offers awesome savings accounts). We have $363 saved up so far, which is much better than the $0 we had heading into the winter months last year. I’d really, really love to have $450 saved up, though, because then if we had three consecutive months of $350 bills, we’d have the money to cover that without a problem. That means we’d have to have a bill of $150 or less in both October and November(which is a pretty low bill for us) and I’m just not sure we’ll be able to manage that.

Maybe, though, this balmy weather will stay for a while and we’ll reach my $450 goal.

The Frugal Girl :: I’ve given my utility site a lot of hits the last two days.

[...] I posted about how I was hoping to have a low bill in October and November, so that we could save up some [...]