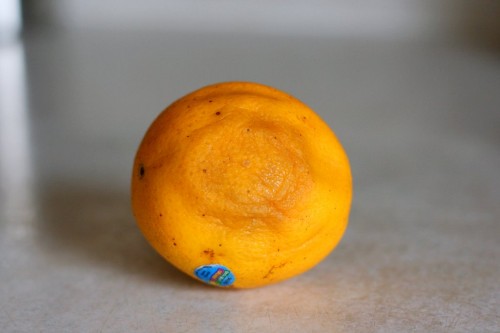 Question number one is from Jessica:

The question I have is about food waste posting. What do you consider waste? I mean if I bought it last week and it’s not gone bad, and I still plan to eat it, that shouldn’t count, right? It’s just all the things that did go bad, or couldn’t be used that you clean out on Friday. So you clean out the fridge, take a picture and blog about what went bad?

Yep, basically that’s it. If something is in my fridge and it’s still edible or I still plan on using it, I don’t count that as waste. It’s just stuff that has actually gone bad, no matter when it was purchased.

I also don’t count miniscule amounts of waste…for instance, if there’s a bad spot in an apple, I just cut the bad spot off and use the rest of the apple, and I don’t bother taking a picture of the bit I cut off. Or if one grape tomato goes bad prematurely, I don’t count that either.

The copious amounts of waste I used to have weren’t from one bad grape tomato or a bad spot in an apple…that waste came from containers of food in my fridge and freezer that I just never got around to using. That’s the bad habit I was trying to conquer, and so I don’t feel particularly compelled to report a teaspoon of apple waste. 😉

Some readers have suggested that I not count compostable food waste, but I prefer to be harder on myself than that. If the food was edible at one point, I count it as waste even if I can compost it(remember my orange from a couple of weeks ago?)

This one is from Jessica too.

How do you handle BIG expenses? I’m finding that we are just constantly paying toward medical debt and it’s the main financial thing that stresses me out.

I haven’t ever read a personal finance book, but I know that a lot of the financial gurus out there recommend saving $1000 in an emergency savings account first(while making minimum payments on your debt), and then working on paying down your debt. That doesn’t make a lot of sense numbers-wise(it would make more sense to pay off the interest-laden debt), but I think the goal there is to change your habits. You want to get used to paying for unexpected situations with cash savings instead of with a credit card

While I don’t know the details of your particular situation, I do want to enourage you to think that saving(and paying off debt) is possible! We’ve never had a particularly high income over the 11 years we’ve been married, but by spending carefully, we’ve always been able to squirrel away a little bit of money each month for an emergency savings.

From Elizabeth: Do you use homeschooling materials with a specifically Christian focus or a more secular or neutral focus, and how did you choose?

That depends on the subject…for things like math or handwriting, I don’t feel like it’s especially necessary to have a Christian textbook, but for subjects like reading or science, I like to use Christian books.

I don’t use one particular curriculum; we use sort of an eclectic mix of books! For example, I use Saxon Math and Handwriting without Tears, I do my own thing with phonics(I’ll post about that at some point, maybe in the fall), and I use Bob Jones science books, supplemented with lots of library material.

I chose books based on the recommendations of others and also based on my own homeschooling years as a student(I thought Saxon was the best math book I ever used, and on the flip side, I thought A Beka science and history books were the most boring books known to man).

I hope to get some posts written about homeschooling on the cheap…maybe I’ll have time this summer when I’m not actually homeschooling!

[...] I’ve mentioned before, by spending carefully, we've also always been able to set money aside in a savings account, and [...]

The Frugal Girl » My Un-Riveting Story

[...] I mentioned on Monday’s Q&A post, by spending carefully, we’ve also always been able to set money aside in a savings account, [...]

I wish I had been homeschooled. I was so incredibly bored in K-12. Unfortunately my parents didn't make a heck of a lot (ironically they work for the school system.)

I graduated HS geeky and socially inept (nothing wrong with being Geeky, mind you) but after college I was fine. I never did the wild college thing either so I guess I'm the statistic that falls on the edge of the bell curve.

We lived in Southern California when K & R were born. I absolutely planned on homeschooling them. The area we lived in was beautiful, but the schools were just downright awful.

After what we've been through with R, I can positively say that if I could do it over again (and sadly, I cannot), I would have homeschooled.

Rachel-we take a break in the summer because all of us can use one! I need some downtime, and we like to have time to go swimming and run around outside, and just do fun stuff. I was homeschooled and we always took a summer break, so that's what I'm used to.

We do still read books and watch nature DVDs and do that sort of thing during the summer-we just don't do formal bookwork. I think that time to play is fairly important for children too, though.

Julia-rant all you want! Having been homeschooled myself, I've encountered the socialization question more times than I could possibly count. lol You made a point I forgot to make, which is that homeschoolers DO socialize with other kids at church, at the park, in the neighborhood and so on. and I also agree that a LOT of the socialization at school is negative.

Kathy-you should stay de-lurked! I love it when readers comment. :) I had no trouble making friends at college either...I had friends in all of my classes, I worked in groups, and I had no difficulty handling the switch to a classroom environment.

And a big "Amen!" on teaching kids HOW to learn. I know how to teach myself how to do things, and that has helped me so, so much in college and in my adult life.