This past March, Sonia turned five, and so she will be starting kindergarten in just a few short weeks. 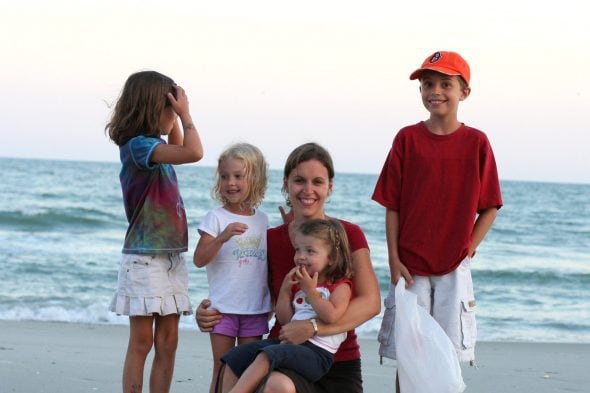 My sister has a five year old this fall too, but this will be her first year of homeschooling. I promised her that I’d send her a list of the materials that I use, and since I thought that this information might be useful to some of you out there, I decided to use my blog to get this job done.

My apologies to those of you who don’t homeschool. You’ll have to come back tomorrow for a more relevant post! 😉

I use the Handwriting Without Tears series for all of my kids. The books are easy to use and present the letters in a sensible order. Instead of working through the alphabet from beginning to end, the book groups letters together based on the way they’re formed.

For instance, all the letters that start with a stroke from top to bottom (like L, F, and K) are learned together. 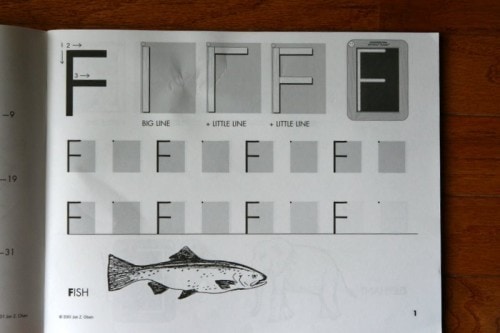 Happily, these books are pretty inexpensive. Even brand new, they’re less than $15 and I’ve often managed to find cheaper new ones on ebay or half.com.

We start with Letters and Numbers for Me and since we usually finish that before the end of the school year, we also use My Printing Book.

I haven’t found most of the HWT accessories to be necessary, but I did buy the slate chalkboard, which I’ve found to be very useful. Writing the letters on a large scale like that really seems to help my kids when they’re having trouble forming a new letter.

I don’t usually manage to have chalk on hand, so most of the time we just practice writing on the chalkboard with a wet finger.

(You could also make a chalkboard if you have an old frame around the house.   Just spray the glass with chalkboard paint and you’re good to go.   Details about how I’ve done there are here.)

I don’t actually use an official phonics program, as I haven’t found it to be necessary, at least as of yet! My method is super-duper cheap and easy, and it’s worked well for us. When Lisey started kindergarten, she only knew one or two letter sounds (I don’t put very much effort into preschool, as you can tell!), and even so, by January of her kindergarten year, she was learning to read.

Here’s what I do.

Using 3×5 plain, unlined notecards, we make a flashcard for each letter of the alphabet. On each flashcard, I write the uppercase and lower-case version of the letter, and I do a simple line drawing of an object that begins with that particular letter. For example, here’s our “W” card. 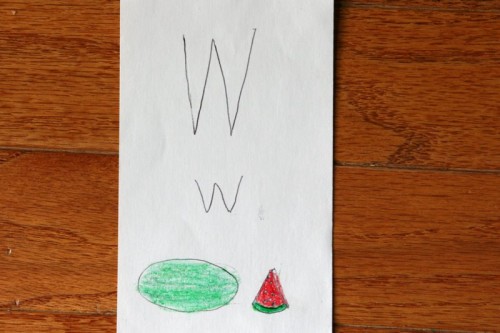 I am NO artist, but I can usually manage to make something recognizable. For our “D” card, I just drew a stick figure with a goatee to represent “Daddy”. 😉 This doesn’t look much at all like my husband, but it’s close enough for phonics purposes! 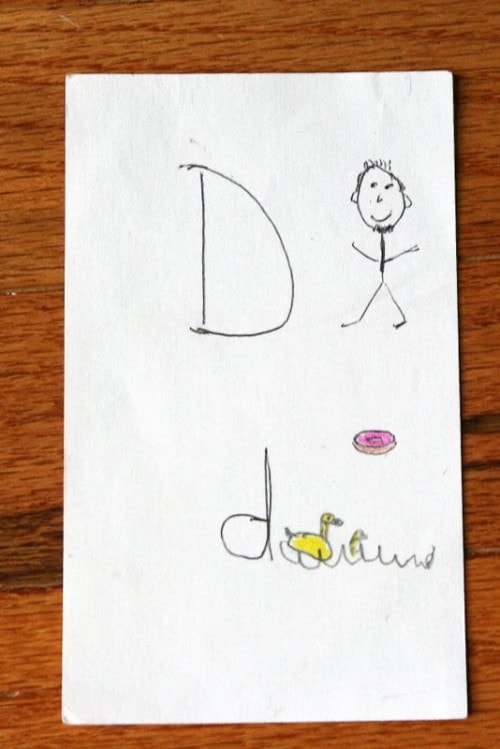 In case you weren’t sure, that’s a doughnut that I drew, and Joshua added a duck.

The handwriting book I mentioned above introduces new letters on a regular basis, and we made flashcards to go along with each new letter. Again, this will not be in alphabetical order, but I don’t think that matters a whole lot. We start out with only one flashcard (the F card, since that’s the first letter in the handwriting book), and add them one by one until we’ve got the whole alphabet covered. I like this gradual approach.

Each day, we go through the flashcards, saying the letter name, its sound, and the word that begins with the letter. For example, for this card:

we’d say “M says mmmmm for Mommy and moon”. Yup, that stick figure is me. The bread and the notes differentiate me from all other stick figures, you see. 😉

When we come to vowels, we always learn the short vowel sounds first. Since the long sounds are really easy to learn (they’re just the name of the letter, after all! A long O says “oh”, a long U says “you”, and so on), we get the short sounds out of the way first.

Every day, we work our way through the growing pile of flash cards to review each letter we’ve learned. By the time we get almost through the alphabet, my kids can do this pretty much on their own.

Once they’ve learned all the consonant sounds and the short vowel sounds, we’re ready to start reading.

Not all kindergarteners will be ready to read in their first year of school, but Joshua and Lisey both have been, and I think Sonia will be too.

I use some very, very, very easy readers at first, as I find that most of the “I Can Read” type books are too hard for a brand new reader. The Bob Books are really small, really short books that are perfect for beginners.

In fact, the first page of the first book has only one word( “Mat.”) on it. 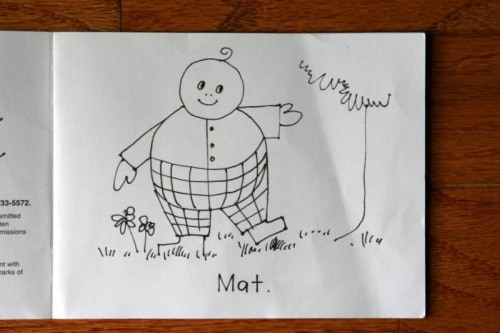 The beginning stages of reading are somewhat slow and laborious. When my kids try to read that first “Mat” word, it sounds kind of like “mmmmm. aaaaa. tuh.”, because they’re not too good at blending letter sounds together yet.

We take it slowly, though, only reading a few words a day at first, and both Joshua and Lisey’s blending skills improved in a short amount of time.

The Bob Books get progressively longer and new words and sounds are introduced in each small book. The first two sets have nothing but short vowel sounds, so your kindergartener can get lots of practice with those before embarking on those tricky long sounds. 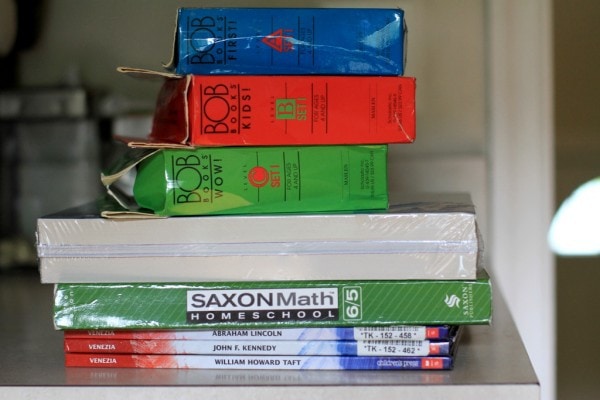 Joshua progressed far enough in his kindergarten year to learn to read long vowel sounds, but I think that Lisey didn’t get to those until first grade. If you do get to that point, you simply have to explain that when an E is at the end of a word, the vowel makes a long sound instead of a short sound. My kids have needed a fair amount of reminding about this at first, but with some patience and persistence, they did catch on.

I bought my Bob books from Amazon, but they can also be found for a good price on Half.com.

Once my children got through the Bob books, I took advantage of the library’s massive collection of early reader books. I have heard that some people’s libraries actually have the Bob Books too, so you might want to check there before purchasing a set. 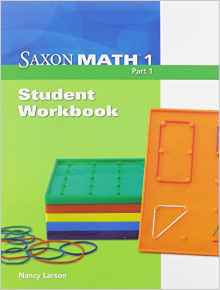 The basic concept behind the Saxon curriculum is that lots and lots and lots of review is essential. Most other math textbooks teach a concept, drill the student on it for the rest of the unit, and then drop that concept until it’s time for the cummulative review. Saxon math books are very different, in that nearly every previously introduced concept is reviewed each day.

I like this for several reasons. First, it makes it almost impossible to forget how to do a certain kind of problem. Secondly, it provides variety in each lesson. Instead of doing 30 addition problems, each day the student gets to do a word problem, a clock problem, a money problem, an adding problem, a fraction problem, and so on.

Saxon books can be awfully pricey if you buy them from a retail outlet, but I can usually manage to get the first grade set of workbooks for $20 or less by watching Ebay or looking on half.com . It’s particularly easy to find a teacher’s manual on Ebay or Half.com, though I haven’t found the manual to be especially necessary for first grade math!

The newer edition is pictured above, but the older edition that I used with my kids is currently less expensive on Amazon. And really, it worked just fine! 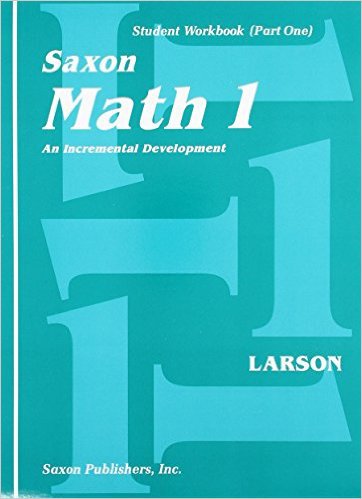 So, those are the basics…reading, writing, and arithmetic.

The handwriting book cost less than $15, the phonics cards are free, aside from the cost of the notecards, the Bob books cost between $10 and $15 each for two sets, and the Saxon math books will be around $20-$25 used (The older version I’m linking you to here includes book one and two for just $30.)

This means that the total cost for a year’s worth of kindergarten basics can be less than $100, which I think is quite reasonable.

Hi! You mentioned at the end of your post that you might write another post about some of the others subjects in kindergarten (science, history, etc.). I would love to read the subsequent post but am not sure where to find it. Could you point me in the right direction?

Kristen - our kids used HWT in school and it was fabulous! I highly recommend it :D

Thank you, thank you! I am very interested in homeschooling my two children but, having been raised in the public school system, I am very intimidated and at a loss for how to start. This seems so simple and easy to do. I did wonder, though, should I order separate books for each child or buy one book and make copies for each child? I have pre-school age daughter and a son who is only 6 months.

You'll need a separate handwriting and math book for each kid, yes. But the Bob books can be used by multiple children.

Unless you have a license to do so, it's generally not legal to make copies of books that you buy.

I love all your tips- one more- to speed up blending words, you can assign a sound to each finger- touch index finger with your thumb, say mmm, touch middle finger, say a, touch ring finger, say t, then run your thumb along all three fingers and say "mat". It is really helpful for kinesthenic learners. We also have a membership to our local science museum, and go there a lot, but it also has a reciprocity agreement with many other science museums around the country, so we can get in free to many places, which makes the $45 annual membership well worth it.

I am new to homeschooling starting this fall. I am "over the moon" excited, the kids *mostly* are too! Ha. I can't tell you what a relief this kindergarten post was. The simplicity of your approach is so refreshing. I think I will return the pre-packaged curriculum I ordered (at $150 +) and get back to basics. Have you ever considered packaging these ideas as a curriculum? (Smiling) Handwriting book, math book, blank index card, library card. Amen. :) )

I am looking forward to delving more into your homeschooling posts. My kiddos are 10, 7, 4, and 1. I will be seeking your frugal wisdom for all those age levels.

Blessings. You are a motivating force for me.

Thank you for this post, I might be unexpectedly homeschooling my five year old this year, so now I've got a good starting point!