I had to buy an unusually large amount of groceries this week, because we were out of a lot of stuff post-vacation. 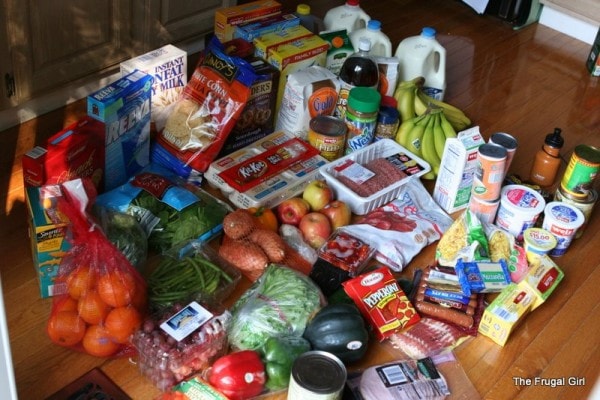 However, I ended September under budget. In the last three weeks of September I only went shopping twice, and I spent a total of $185. That would be under for even two weeks, and it’s way under for three weeks. So, I can more than cover the $29.52. 😉

Breakfasts this week will be oatmeal, muffins (I’m going to make some pumpkin apple muffins so I can share a recipe with you), toast, cold cereal, and bananas.

Lunches will be leftovers, fruit and yogurt smoothies, fruit, raw veggies (cucumbers and carrots), and bread.

Dinners are as follows.

I'm making pizza on Friday too!

I see that you bought a package of pepperoni. Let me share a tip with you. I buy my pepperoni from a local pizza restaurant that sells me enough for two pizzas for the price of a single "topping," which is $1.50. This not only saves me money, but there's zero packaging, (when I remember to bring my own container) and I don't end up with more than I need.

This tip is only a saver for the meats. Other toppings like mushrooms, olives, etc. are more expensive when I buy them from the restaurant.

I have also bought shredded mozarella cheese this way and saved.

You got a TONNE with what you paid... i'm with the first poster, everything seems to cost so much more here! :( I'm "getting by" with $100 this week because the kids are always whining that "there's nothing to eat"... LOL! So i'm "cleaning out" this week! ;)

I'm glad to know the animals will be back soon :) If the chai tea mix works out, will you post the recipe? It's pretty expensive to buy in the stores. I believe it's $3.99 for the powder mix at Trader Joe's and it only gives you nine drinks. I make my own hot cocoa mix and all of my spice mixes (taco seasoning, ranch dip etc.) I never thought to make my own chai mix!

Freckles, we completely and utterly forgot! lol It's been 4 weeks since we took a grocery picture and my kids and I just didn't remember.

We'll try and do better next week.