Yeah. This week I’m way over budget. So much so that I really felt like skipping out on today’s post. But, I’m trying to be real here, and in real life, sometimes you go over budget.

Let’s begin to asses the damage, shall we?

It wouldn’t be, except that earlier in the week, I had to send my husband to Weis to pick up some things I forgot, and that set us back $23.43 (worry not, he stuck to my list admirably, except that he did buy me a six-pack of marshmallow pumpkins. Hmmmm….maybe I don’t have to count those in my grocery budget.)

And then a little later in the week we were out picking up a pair of jeans for my husband, and I stopped into the grocery store next door for a few things ( for example, I was going to make hamburger buns for that night’s dinner but ran out of time, so I spent $3.19 on buns). Anyways, that added another $12.10 to my spending.

However, I have $400 for the month, so if I spend less for the next three weeks, I could still come out ok. I just need to average $84 a week, which I think I can do if I work at it.

Here’s what I bought minus the stuff from the random trips earlier in the week. 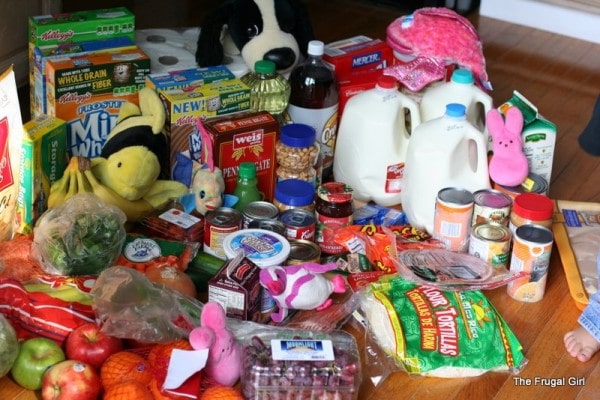 Breakfast this week will be a mixture of muffins, oatmeal, cold cereal, toast, sweet potatoes (Lisey likes to eat them for breakfast), yogurt, and bananas.

Dinners will be as follows:

The Frugal Girl » And now, the grocery spending.

I just found your site today while looking for homemade hamburger buns. Then of course I began linking to all of your posts. (Still looking for your baking blog address?!) Anyways, I came across this post and wanted to make a quick comment...

Our family is currently working with a financial adviser (one that happens to be closely related to the family, and is not charging us for her services) sooo.... we've really had to buckle down in all of our spending to get our other debt/bills on track. The first week we began she gave me $60.00 for groceries for the week. By the way, I have a family of 5. Believe it or not, I managed to do it, including dog food and some toiletries for right under that amount. I do buy everything I can get at Aldi, and then will make a quick Wal-mart run but normally for only 5 or less items. Anyways, this past week, she upped our grocery money to $75.00 which I was thrilled about. And would you believe that after I made out a grocery list (7 days, all 3 meals and snacks here at home!) I only spent $55.00. I was floored, and a little bummed that she had given me more and yet I spent twenty dollars less. I'm happy to say, we have yet to eat a hotdog/macaroni meal!!! Anyways, you are right when you say that if you plan it out, a cheap grocery budget is not impossible. It does take time and creativity, which I am sure you have just reading a few of your posts assures me of that, the creativity, lol... no one has extra time of course!) Thanks for letting me share, and good luck!!

One of the benefits of sharing a bank account with my ex-husband is if I need to go over budget, I just write a check out of *his* account instead of my primary one. So far he's never said anything about it...I consider it an A**hole tax!

@Katy Wolk-Stanley I think that tiny toes are going to be in the "do without" category. I've seen no evidence that Kristen is going to part with them.