First, the food. Can you tell that Zoe put the stuffed animals in this week? (since they’re all sea creatures!) I think there are five altogether. 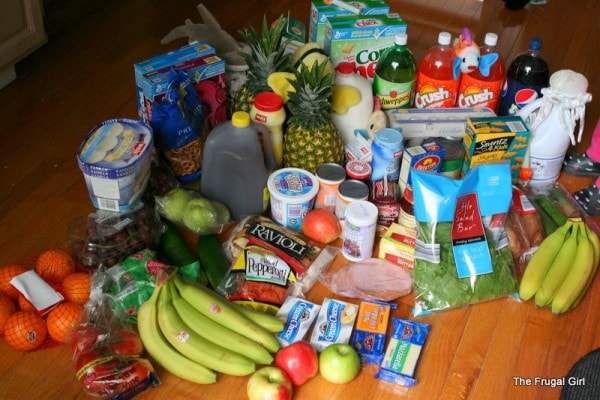 I don’t usually buy this much soda, but I needed it for a birthday gathering we are hosting here today.

At Weis, I spent $33.44 (I am slightly embarrassed to say $.50 of that was for a dark chocolate covered marshmallow pumpkin. I ate it last night, though, and it was heavenly.). $56.58 was my total at Aldi, which puts me at $90.02. I told you all last week that I was trying for $82, and while I didn’t meet that goal, I was sort of close, much closer than I would have been if I had no goal. I managed to resist buying a lot of things yesterday because I knew I didn’t have much wiggle room.

All this means that if I want to stay on budget for October, I have to spend only $74 next week. Yikes. I’m not sure I’m up to that task, but I’ll give it a shot.

(Note to self: Let’s try and not get behind on the grocery budget again, because catching up is hard work.)

Ok, on to what we’re eating. Breakfast this week will be the usual…oatmeal, toast, yogurt, sweet potatoes for Lisey, bananas, and granola. For lunch we’ll have yogurt smoothies, homemade bread, oranges, cucumbers (my children like to eat them sliced and sprinkled with salt), and leftovers when necessary.

This is what we’ll be eating for dinner. Some of these meals got bumped from last week, because I changed things up a bit from my plan.

Saturday (we’re having a multi-birthday gathering here today, but mostly for my father-in-law, who chose the menu)

When you see a good deal do you stock up or leave it? We have beautiful Boston Pork Roast at .99 lb limit 4 Great price!!!! NEVER goes that low in Phoenix. I can make so many different meals with it. One roast would do 2 meals and with 4 kids (3 of them teenagers) WOW. Just wandering if you or your readers stock up.

I just wanted to say that the little feet and legs in these photos are so cute.

Oh, also- I keep meaning to ask- I'll bet a lot of us would be interested in a post about using coupons- I know I would. Like when you say you get drugstore items almost free- how does that all work? I've hardly ever taken the time to use coupons.

Do you have a seperate budget category for personal and household items like toilet paper, shampoo, cleaners, laundry detergent, soap? Those things always throw off my bill when I am shopping. I am a serious coupon clipper and usually save close to 50% on my bill with coupons and preferred shopper prices, but when I have to restock on personal and household items, it always messes with my spending even though I do try to shop the sales and use coupons on those, they savings just aren't the same.

I haven't gone shopping yet this week. I have to make my list tonight and then go tomorrow. I'm so behing this week!