So, a while back, Tropical Traditions sent me a package of their coconut flour to try (this is the same company that sent me the coconut oil that I used to make my coconut granola). 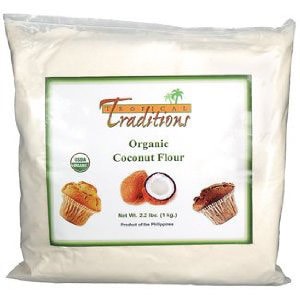 Coconut flour is milled from the coconut meat that’s left when the oil is pressed out, and since it’s grain-free, it’s often used by people who have grain or gluten allergies.

I’ve never used it before (except for when I used a tiny bit in a granola bar recipe), and so I decided to try a recipe for waffles. The batter was really, really runny and eggy, and I thought it would never turn into waffles once I put it into the iron, but the resulting waffles did look like waffles. 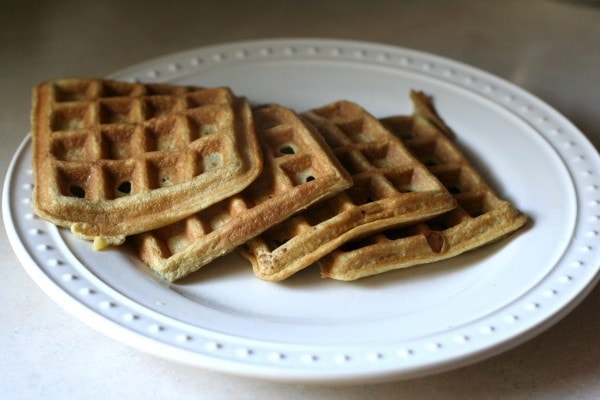 They didn’t taste nearly as good as my regular waffles, though…they were definitely more eggy and had a fairly strong coconut flavor.

Joshua didn’t like them, but the girls did, so none of them went to waste, happily!

I’ve seen some other recipes that use coconut flour, but I’m a little hesitant to try them without hearing some hearty recommendations. So, if you’ve got a great coconut flour recipe, would you link me up to it or send it to me in an email (the frugal girl {at} gmail {dot} com)? I’ve got quite a bit more flour to use, and I don’t want to waste it.

Also, Tropical Traditions has set aside a 2.2 pound package of organic coconut flour for one of you, so if you’d like to win that, just leave me a comment on this post, and in 48 hours, I’ll randomly choose a winner.

(by the way, I see that Amazon carries Tropical Traditions’ Organic Coconut Flour

, so if you don’t win this giveaway, you could buy it from Amazon and use some of your Swagbucks to pay for it! (don’t know what Swagbucks are? Read my thoughts about the program!)

disclosure: Tropical Traditions provided me with a free sample of this product to review, and I was under no obligation to review it if I so chose. Nor was I under any obligation to write a positive review or sponsor a product giveaway in return for the free product.

My husband loves coconut, we'd love to try this!

I wonder if my friend could use coconut flour for gluten-free baking.

I'd love to try it. I'm on a gluten free diet right now and am experimenting with lots of different flours!

As someone who has had to go gluten free (it's been years now), I love coconut flour for cupcakes and muffins (anything fluffy)! Here's the recipe I use for chocolate cupcakes: http://www.elanaspantry.com/chocolate-cupcakes/ and the one for blueberry muffins: http://www.elanaspantry.com/blueberry-muffins/ from Elana's Pantry. The blueberry muffins are soooo good - we eat them piping hot, and my daughter (not gluten free) loves them as much as I do. When I made the chocolate cupcakes to bring to school for her birthday, everyone asked what bakery I got them from. (As you can imagine, I'd love to win the coconut flour! But who ever does: be sure to keep it in the freezer so it stays fresh!)

I'd love to give the coconut flour a try. Thanks for the chance.